A Force of Nature

Environmental activist, bee enthusiast and wildlife gardener Brigit Strawbridge-Howard, spoke to us recently upon the recent release of Dancing with Bees. The book tells of the author’s return to nature and the impact it has had on her, with a close focus on her passion for bees and other creatures. We spoke with Brigit about the book and touched on the climate crisis, discussing the ways in which nature can reconnect you with not just the environment, but yourself.

How did you first get into the topic?

Twelve years ago, I was running an environmental charity which I had set up because of my concerns about all that we humans were doing wrong and my growing awareness of environmental issues. I was working on huge issues such as deforestation, climate change, waste, biodiversity loss, and as well as becoming overwhelmed and not knowing where to focus, I was also aware that whenever anyone came to ask me what they could do to help, I was keeping my fingers crossed that they’d ask me about bees. I was initially more concerned about the impact of bee decline on the human food chain, but as I started to watch the bees in my own back garden, I became more concerned for the bees themselves. It was at this point that I made the decision to close the charity and focus entirely on bee decline and biodiversity loss because those were issues that I wasn’t only concerned, but passionate about. You can’t focus on every issue – I tried to, but I was permanently burnt out. I focus now on what seems to work for me. You evolve, don’t you? I’ve taken on a more supportive role now on social media. I am more likely to retweet someone else’s campaign message than write an article or a blog about it myself.

Has social media made it easier to connect with the environmentalist community?

Twitter is a brilliant resource which I’ve learnt an awful lot from and continue to learn and share. It’s full of the most incredible people; experts who share their knowledge so freely, enthusiasts and nature lovers. You’d be forgiven for thinking all was well with the world because it can be a bit of an echo-chamber sometimes.

What are the biggest environmental threats which bees face?

Bee decline is a complex issue and there are many factors that we need to think about. The main ones are climate change, habitat loss, and pesticides. Together those three are the biggest contributors to bee decline. Climate change is partly for obvious reasons, for instance if it rains, many bees will not leave their nest, but the other thing that climate change is doing is causing bees and other pollinators to emerge from hibernation during warm spells over the winter months when the flowers that they rely on have not bloomed. Bees and insects will emerge just because the weather is warmer, but flowers often need longer daylight hours to bloom, so climate change is affecting bees on many different levels and they’re not all tangible.

Are there any first steps that you could provide for people who want to help bees?

What I suggest to people is that they get out in the garden and pay attention to the diversity of bees and other insects that are already there. Reading books, watching nature programmes and following nature people online are all great ways to learn but nothing beats actually seeing for yourself. Another way you can help is to ensure you have nectar and pollen rich plants flowering the whole year round, not forgetting winter flowering plants. By getting out into my garden I noticed that there was a gap around February/March time, so my aim is to fill that gap. A great place to buy plants for bees is a company called ‘Rosybee’, which is not far from Oxford. Another way to help bees is to allow native wildflowers to flourish, especially in your lawn but leaving some areas of short grass and sparse vegetation for ground-nesting solitary bees. Another very important step is to stop using pesticides, they pose a serious threat for bees. Lastly, create a mosaic of habitats in your garden to increase pollinator diversity. 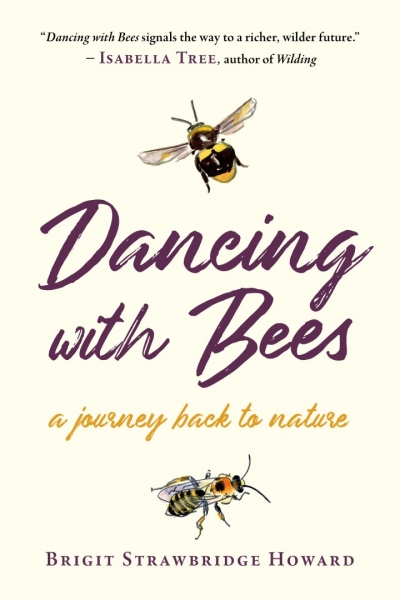 In your book you discuss the notion of losing touch with nature as we age, why do you think that happens?

As a child I felt nurtured and protected by the natural world, I was fascinated and full of wonder and awe. As I went into my teenage years, I began to connect more with my peer group and unless your friends are also keen young naturalists, you inevitably become so drawn into the teenage world of friends and weekend plans that you lose touch with what’s going on outside. I lost touch completely. Then you get married, have children, get a job, and suddenly you just find yourself completely immersed in the merry-go-round of life. During those years I was still buying loads of beautiful nature books for my children, taking them on walks and teaching them about nature but not in the way that I do now. I wasn’t getting out of it what I do now, and I wasn’t putting much back either.

And what does it mean to you now?

I feel I’ve come home; I feel reconnected and it quietens me, I have more respect for the wildlife and the wild plants that I see. When I go outside – no matter what is worrying me, no matter how big the issues are that I’m dealing with in my personal life or how worried I am about the planet – when I go for a walk or just go out into my garden and sit, I feel at peace.

Do you think schools should make more of an effort to teach about the environment and the species which inhabit it?

I think teachers sadly have their hands tied these days. I used to do a lot of work in primary schools. I’d go in and talk to the children about bumble bees and solitary bees and I noticed that they were already becoming a little bit disinterested and disconnected by the time they reached year six. I got a sense that it was maybe ‘not so cool’ to be interested in nature but there are some incredible young people today who have stayed true to their passion and their love of the natural world despite peer pressure. There’s a powerful rising youth movement which is amazing to see.

What do you think it is about these young activists like Greta Thunberg that sparks a public reaction?

These young people are not afraid to speak out for wildlife. They give me hope and re-energize people like me who have been working, fighting or campaigning in this area for decades. They’re hitting a nerve in those who complain that they’re taking time off school. Those people either just don’t get it or perhaps they’re too frightened to get it. Losing a day at school pales into insignificance compared with the importance of the message they’re getting out there. They are a force of nature and a force for good.

Do you have a favourite book or resource on the topic?

The book I always recommend if you want to know more about bees is Field Guide to the Bees of Great Britain and Ireland by Stephen Falk. That is the most comprehensive and wonderful resource. If you want to know what to plant, Plants for Bees written by W D Kirk is such a good book because it’s written by people who know their plants and their bees so it’s not just a list of plants to grow, it goes into far more in depth. In terms of online resources, bumblebeeconservation.org is great for children but for those who want to go deeper, bwars.com is an enormous and fantastic resource.

What’s next in the pipeline for you?

I have started writing a second book for which my working title is On French Mill Lane. The book is less about bees and more about back garden wildlife – not just mine, everybody’s. It’ll be written in a very similar vein – it’s the only way I know how to write really – lots of stories, lots of people and lots of places.

Dancing with bees is available now for purchase.