A Labour of Love: Master Goldsmith Peter Carl Fabergé at the V&A

Fabergé in London: Romance to Revolution (20 November 2021 – 8 May 2022)  is the first major exhibition devoted to the international prominence of the legendary Russian goldsmith, Carl Fabergé, and the importance of his little-known London branch.

With a focus on Fabergé’s Edwardian high society clientele, the exhibition shines a light on his triumphs in Britain as well as a global fascination with the joyful opulence of his creations. The largest collection of the legendary Imperial Easter Eggs in a generation are on display together as part of the exhibition’s dramatic finale, several of which are being shown in the UK for the first time. 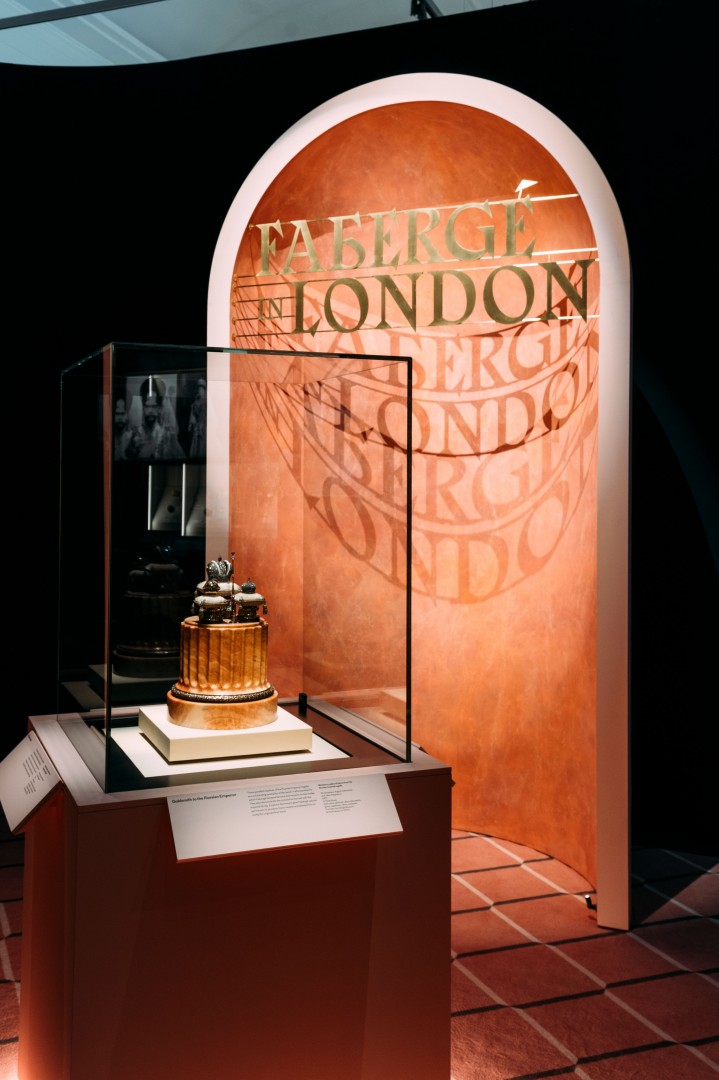 The exhibition tells the story of Carl Fabergé and his internationally recognised firm that symbolised Russian craftsmanship and elegance – an association further strengthened by its connection to the romance, glamour and tragedy of the Russian Imperial family. It explores the Anglo-Russian nature of his enterprise with his only branch outside of Russia opening in London in 1903. Royalty, aristocrats, American heiresses, exiled Russian Grand Dukes, Maharajas, financiers with newly-made fortunes, and socialites flocked there to buy gifts of unparalleled luxury for each other; Fabergé works were as popular in Britain as they were in Russia.

The first section of the exhibition highlights the important patronage of the Romanov family. A miniature of the Imperial Regalia, lent by the Hermitage Museum, made for the 1900 Paris Exposition Universelle will capture Carl Fabergé’s role as official goldsmith to the Imperial family whose members often gave each other intimate Fabergé gifts. Bespoke, ornate objects including flowers made from rock crystal, gold and rose-cut diamonds and exquisite family portrait miniatures can be seen and this section also touches upon Carl Fabergé’s youth, his travels throughout Europe, and entry into the family firm.

Commissioned by Emperor Nicholas II, a figurine portrait taken from life of the private bodyguard of the Dowager Empress is on display – a sculpture on a level of rarity with the Imperial Easter eggs. A prayer book gifted by Emperor Nicholas II to Empress Alexandra Feodorovna on his Coronation Day also sits alongside early photography of the Imperial family with their prized possessions. 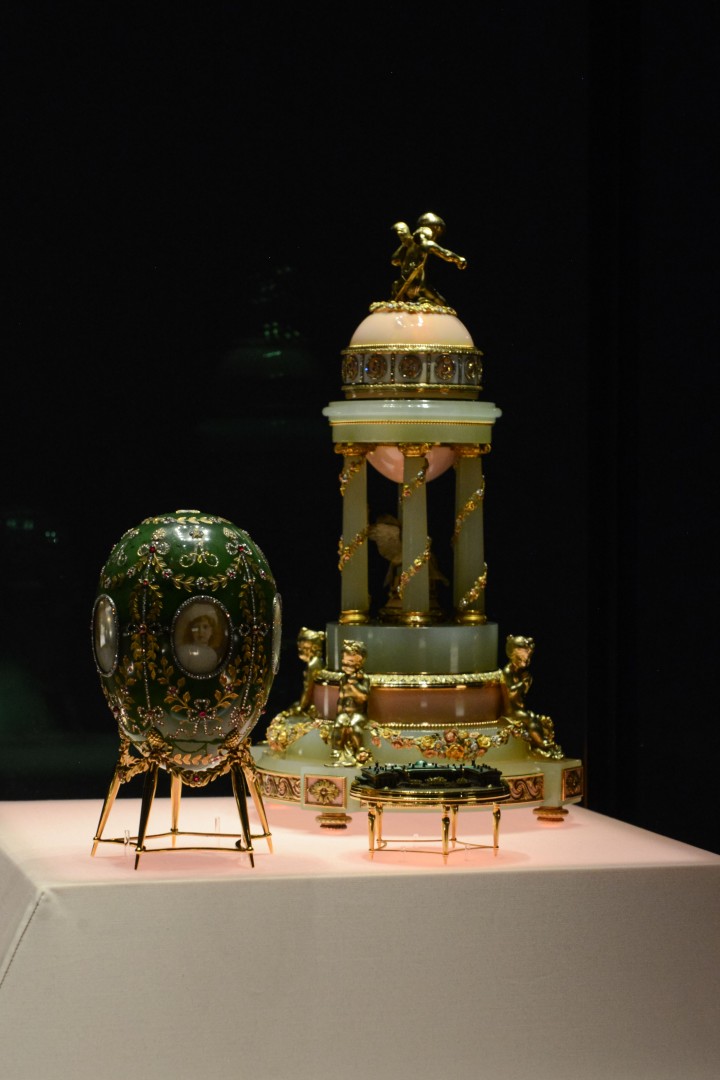 Creating a culture of creativity, Fabergé’s restless imagination inspired daring material choices and designs, while the integration of designers, craftsmen, and retailers under one roof galvanised creative collaboration. The dazzling beauty of Fabergé’s work is shown by a sparkling aquamarine and diamond tiara – a token of love from Frederick Francis IV, Grand Duke of Mecklenburg-Schwerin to his bride Princess Alexandra of Hanover and Cumberland on their wedding day. The only known example of solid gold tea service crafted by Fabergé can be seen, one of the most magnificent items to emerge from the firm’s Moscow branch. Further, the nurturing spirit of Fabergé is shown in the work of one of his best-known female designers, Alma Pihl. Some of her most innovative and enduring works are on show including a scintillating ‘ice crystal’ pendant made from rock crystal, diamonds and platinum.

The second section tells the story of Fabergé’s time in London, including how the firm flourished under royal patronage, and how its creations became a social currency for gift giving and ostentatious displays of wealth, amongst the cosmopolitan elite who gathered in the city.

Huge success at the 1900 Paris Exposition made it clear that Fabergé would have a keen customer base outside Russia and his choice of London for the new premises was partly because it was the financial capital of the world, a luxury retail destination able to draw a wealthy and international clientele. It was also the home of Edward VII and Queen Alexandra who were already avid Fabergé collectors, making royal patronage in London highly likely. A transitional section in the exhibition transports visitors from Russia to a bustling London and highlights the strong links between the British and Russian Royal Families.

Fabergé carefully tailored his works to his British clientele. He created hardstone portraits of the farm animals King Edward and Queen Alexandra bred at Sandringham, their favourite country estate, and objects enamelled in The King’s horse racing colours. Fabergé quickly became the most exclusive and fashionable place to buy gifts: the King’s mistress, Mrs George Keppel, gifted the King an elegant art-nouveau cigarette case with a snake laid in diamonds biting its tail – a symbol of unbroken and everlasting love. Snuffboxes decorated with topographical views, buildings and monuments were also popular. A nephrite cigar box, set with a sepia enamelled view of the Houses of Parliament, was bought by Grand Duke Michael of Russia on 5 November 1908, the day of Guy Fawkes, and given to King Edward VII.

The end of the exhibition’s second part moves towards the fateful impact of the Great War and Russian Revolution on Fabergé. With Russia’s entry into the war in 1914, Fabergé’s production suddenly shifted. The workshops focused their output on the war effort and went from creating exquisite objects to producing munitions. Their meticulous craftsmanship switched from jewels and precious metals to copper, brass and steel. In 1917, as the Revolution hit Fabergé’s workshops in Russia, its outpost in London ceased to operate. 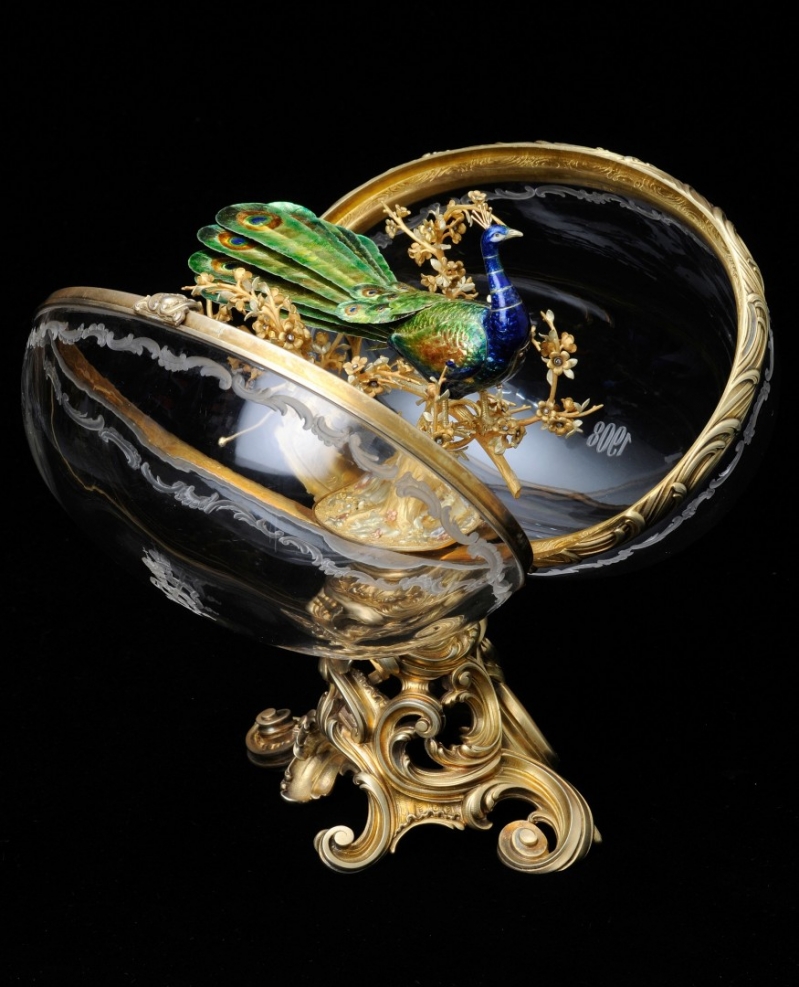 The final section of the exhibition celebrates the legacy of Fabergé through perhaps their best-known pieces: the iconic Imperial Easter Eggs. Fifteen of these famous treasures form the largest collection on public display for over 25 years including several that have never before been shown in the UK including the largest Imperial Egg – the Moscow Kremlin Egg – inspired by the architecture of the Dormition Cathedral, on loan from the Moscow Kremlin Museums.

The Alexander Palace Egg, featuring watercolour portraits of the children of Nicholas II and Empress Alexandra and containing a surprise model of the palace inside also takes centre stage, alongside the Tercentenary Egg, created to celebrate 300 years of the Romanov dynasty, only a few years before the dynasty crumbled. Other eggs that feature include the recently rediscovered Third Imperial Egg of 1887, found by a scrap dealer in 2011 – one of the ‘missing’ eggs created by Fabergé that was lost for many years. The Peacock Egg of 1907-8, shown on public display for the first time in over a decade, contains the surprise of an enamelled gold peacock automaton and Empress Alexandra Feodorovna’s  Basket of Flowers Egg, lent by Her Majesty The Queen from the Royal Collection will also be on display.

Although Carl Fabergé’s firm eventually ceased to exist, the myth crystallised around the Imperial Easter Eggs and the demand for Fabergé pieces has endured with his designs continuing to inspire, captivate and delight.

Curators of  Fabergé in London: Romance to Revolution, Kieran McCarthy (Joint-Managing Director of Wartski) and Hanne Faurby (V&A Exhibition Curator) state:  “The story of Carl Fabergé, the legendary Russian Imperial goldsmith, is one of supreme luxury and unsurpassed craftsmanship. Through Fabergé’s creations the exhibition explores timeless stories of love, friendship and unashamed social climbing. It takes the visitor on a journey of sublime artistry and patronage towards the revolution that tragically closed Fabergé - but sends visitors away on a high, by honouring Fabergé’s greatest legacy, with a dazzling final display of his iconic Easter Eggs.”

Tickets  and further information are available at vam.ac.uk. The exhibition is supported by Pan Pacific London, panpacificlondon.com