A Nation of Romantics

An Audience with Hollywood Royalty

When it comes to matters of the heart, romance is very much alive and kicking in the UK, with three quarters of Brits admitting to being self-confessed ‘romantics.'

Research by norma&dorothy has found that no matter how old we are, romance still plays a key part in Brits’ lives, with 74% of all people describing themselves or their partner as being ‘romantic’- and it seems we still value the simple, traditional ways to show our love.

- A romantic meal out together is our favourite way to celebrate love. Three out of four people across all age groups would think it romantic for their partner to take them out to a restaurant, with 67% of people finding a candlelit dinner at home just as charming.

- Saying it with flowers is a tried and tested hit - 70% of women and 61% of men feel this is a great way to display your desire.

- Going to the cinema is a turn-off as you get older: over half of 16-24 year olds would happily canoodle over the popcorn, but only 15% of over-55s think this is a romantic thing to do.

But for millennials, the digital space offers even greater opportunities to set the romantic mood:

- Over 80% of people between 16-34 consider themselves to be romantic.

- Almost half (49%) of under-25s would describe an evening in front of Netflix with their partner as romantic.

- A third of young people would demonstrate their love by creating a Spotify playlist for their other half.

And, of course, social media is a route to romance with younger people. Nearly 60% of young people agree that social media helps them to improve their relationships - with a fifth of respondents agreeing that it’s romantic to update your relationship status on Facebook or tag you in a photo on Instagram. People over the age of 55 are much less convinced, though: only 2% would read anything romantic into a tagged photo.

Although we are unquestionably a nation of romantics, our attitudes to love vary around the country:

- If you live in Yorkshire and the Humber, you’re most likely to consider yourself to be. A staggering 84% of people in Leeds are self-confessed romantics, and 80% of people in Sheffield think that their partner is romantic!

- Brighton comes bottom of the love list - only 57% of people surveyed would label themselves as romantic.

A quarter of people in Leeds, Liverpool, Cardiff and Bristol think it’s romantic if their partner makes them a mix tape. And in Glasgow, 45% of people say that social media helps their relationship.

But a word of caution to inspired lovebirds - if you’re planning to head out and surprise your other half at work, you may want to think again – only 1 in 5 men and 1 in 3 women would think it’s romantic for their partner to pop up out of the blue, even if it is with a bunch of flowers!

Grace Sherriff, founder of Norma and Dorothy, said: “It’s great to see that romance is alive and well in the UK. We want to celebrate romance in whatever form it comes, so whether you’re a fan of flowers or getting ready to update your relationship status on Facebook, we’re keen for everyone to show their romantic side this Valentine’s day.” 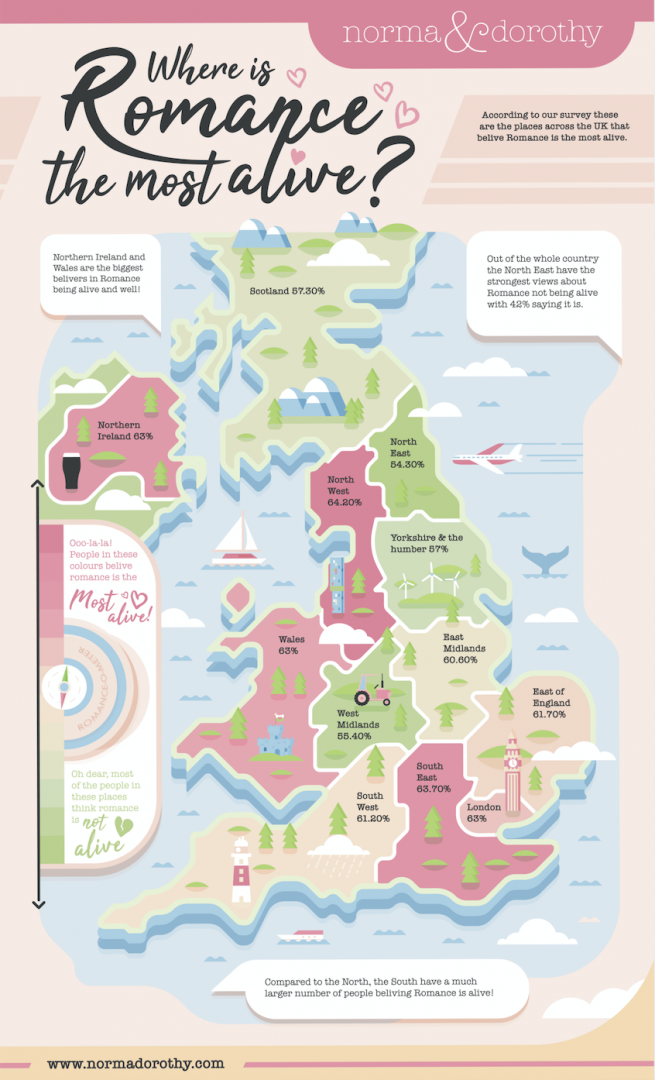 Glyn Davies and Gareth Lewis first met 44 years ago. Glyn had just got a job with the BBC and had moved to London from Wales. He was living in Notting Hill and one night visited his local gay pub, The Champion. There he overheard Gareth’s Welsh accent and the rest is history.