A Place for Everyone

We Speak to 'That Oxford' Girl' Tilly Rose

The Birth and Death of the Summer Blockbuster

I arrive late at the Turl Street Kitchen to meet Tilly Rose, founder of the hugely successful blog, That Oxford Girl (TOG), which portrays the experiences of Oxford students as a means of demystifying the university and encouraging young people to apply. I wasn’t feeling a million bucks, I’ll be honest. The British Media Awards were the night before and my brain was treating me to an episodic carousel of all the reasons never to drink again. I was rushing because I’d had to go home first to change my shirt – I’d spilt Berocca down my other one. By comically stark contrast, across from me Tilly was immaculately turned out, alarmingly fresh faced and prepared with neatly written notes.

She was ten years old when, on a wander around Oxford, she stuck her head into Baliol College. Transfixed, she immediately decided that this was where she’d like to go to university. Eight years later that childhood dream would become a reality when she was accepted to read English at Jesus College. In getting there however, she would have to overcome untold obstacles. 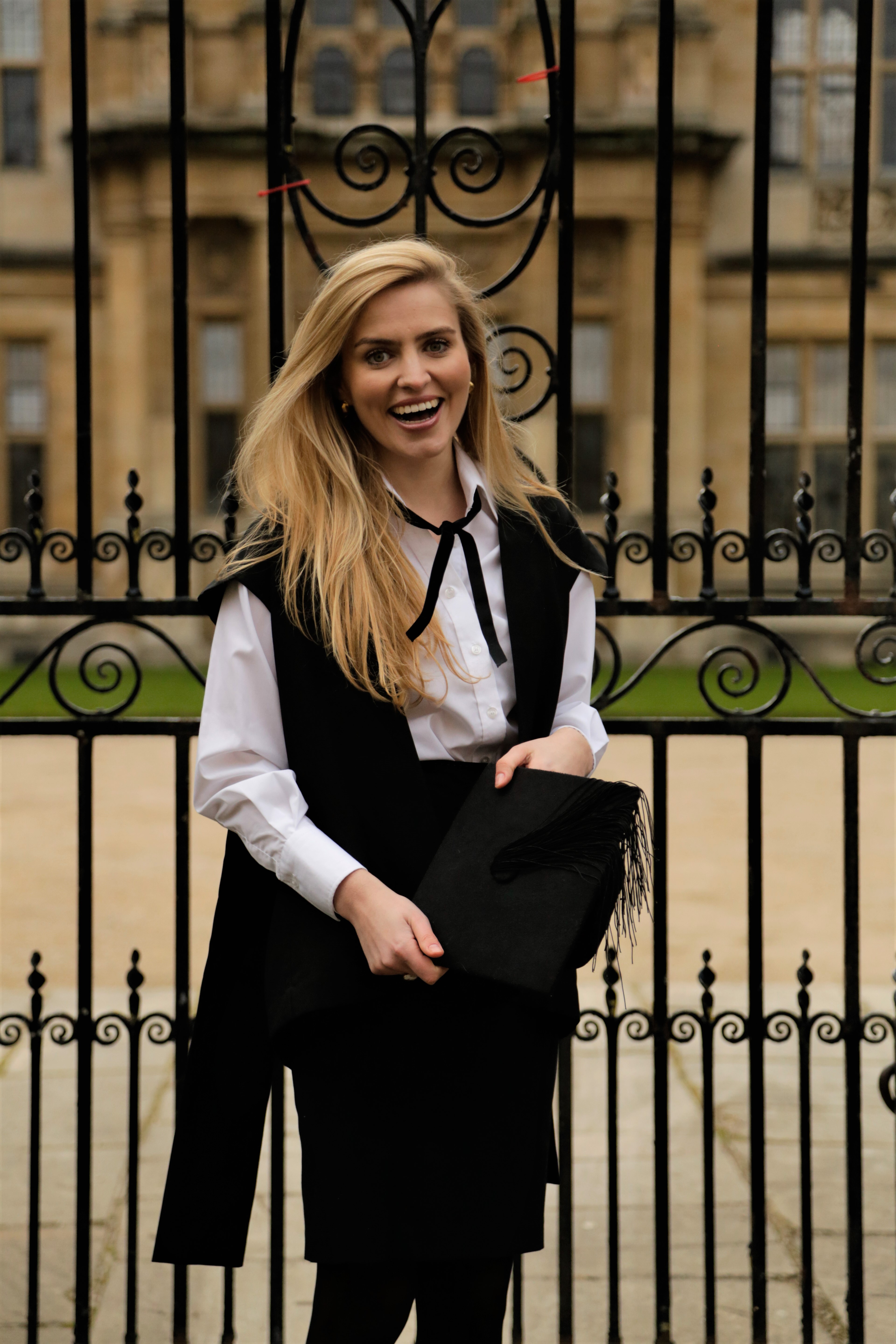 When she was eleven she became very seriously ill. She suffered recurrent pneumonia, but test after test failed to find the source of the problem. Despite having hardly been to school for years, she managed not only to do her GCSEs but do well. During this time, her school had essentially told her not to bother with her exams. Undeterred, she continued to teach herself the curriculum while no doctor could explain what was happening to her body. Much to the shock of her school, she applied to Oxford, and then to their utter amazement, she got in.

In her second year, she ended up in hospital for six weeks of an eight-week term. It was then she found out that “Oxford have a residency rule where you have to be a resident in college six weeks, otherwise they don’t think there’s any chance you can keep up with your degree.” At the same time that the university were telling her she’d have to take a year out, doctors were telling her “that every single test had been done – there was nothing left to do. The IVs weren’t working properly anymore, because when you’ve had that many IV antibiotics, you start to become immune to them. So it was basically a case of, whatever this is, it’s probably not going to kill you, but there’s nothing else we can really offer you.”

Given this news, taking a year out would have no effect. “I said that if I take a year out, nothing’s going to change, this is how my life is now sadly.” She dug out the huge tome containing the university’s rules and regulations and “saw that there’d been precedent for somebody having a four-year degree where it meant that your three years were spread over four. You got the exact same number of tutorials, the same amount of lectures; you just got that bit longer to do it.” The university relented and “found that it had happened and could happen again”.

It was around that time that her medical limbo was ended in scenes reminiscent of House. “It wasn’t even one of the top doctors; it was a random test that was carried out by someone on the ward – a blood test for tuberculosis.” The first test to provide any real answers in over a decade confirmed that she’d been living with undiagnosed active tuberculosis for 13 years, “which was basically killing me from the inside”. Surely that’s enough adversity for one degree? Well, not quite. “In my third year, they started the treatment and I went into anaphylactic shock.” She was allergic to the treatment for TB, “so then it was, ‘you’ve got TB and the TB is going to kill you.’”

Over the next six months, a Liverpool-based professor (“the expert on TB in the country”) began looking into other combinations of drugs that might work. The answer was found to be chemotherapy treatment, which she was then on for 18 months whilst sitting finals. After years of steadily scarier prognoses, she was now cured and able to get on with life without the spectre of illness following along.

Throughout her route to Oxford, there were times where a lack of information and institutional support made her success all the more unlikely. She doesn’t blame her school for not pushing her. In the state sector, “schools want people to meet the criteria and get the grades to maybe pass their GCSEs, but if you’re achieving higher grades there isn’t that support.” Contrast that with the private sector where there are often dedicated Oxbridge tutors armed with intricate knowledge of the applications process and that which is demanded of students. There was a dearth of accessible information online, too. The university’s own materials are stuffy, opaque, and presume a certain amount of previous knowledge.

This was her inspiration for starting That Oxford Girl – to provide a free access resource for young people considering applying to Oxford, which would explain some of Oxford’s potentially off-putting quirks, but also get across the weight of tradition and history that makes Oxford a special place to study. This cuts to the heart of an issue within the access debate – that in order to appeal to young people from certain backgrounds, Oxford must do away with its pomp and circumstance. “The assumption that because people are from a particular background, it means they don’t want to sit there with a candelabra – that’s just not right,” she tells me decidedly. “They did a vote for sub fusc, which is academic dress, and 75% of the student population wanted to keep it. So they’re slated for things like that, but actually, the students themselves quite like it. It’s what makes Oxford unique.”

Initially, TOG was a means of Tilly sharing her Oxford journey. No longer at the university, and realising that it was “no good just having my perspective” she set up a student ambassador scheme that started with “seven students from a couple of the colleges and halls and now there’s a team of over 70 at different colleges around the university.” Each ambassador has their own story to tell and writes about different aspects of the Oxford experience. “We don’t shatter the idea of the dreaming spires, but it’s a more honest perspective. Some of these young people that are writing for TOG now have overcome huge obstacles to get here, whether that’s illness, disability, their socioeconomic background, being in care, being young carers – there are so many challenges they’ve faced.”

Alongside the blog and Instagram page, she has published a book that explains practically every aspect of Oxford student life in a digestible, bright and accessible way. There’s a whole chapter on traditions, there are example interview questions, a list of what to expect from your first term and a glossary of terms at the back that taught me a couple of things. She hopes that if young people have access to this and similar resources at a young age, then aspirations to Oxford and higher education might be on their radar when it counts.

“Oxford make a lot of claims to say ‘we welcome young people from BAME backgrounds’ or ‘we welcome students from low socioeconomic backgrounds.’ It’s all well and good saying ‘you’re welcome here’ but if, for instance, you’re at an inner-city state school, no one in your family has been to university, then you don’t know anything really about higher education – you certainly don’t know anything about Oxford.” One of Tilly’s favourite parts of the year is approaching – when she finds out from people that have applied that they did so after having their confidence boosted by TOG. Of those that didn’t get in, she’s found that a “majority of them had been offered places at very good Russell Group universities”.

Tilly’s story certainly put my headache in context. To achieve all that she has is inspirational enough, but to take what she’s learned and make something out of it requires something extra. Against the odds, one ten-year-old girl’s dream of the spires was realised – and now that same girl is there for the next kid, to shorten the odds and help Oxford truly be a place for everyone.