Art in the castle

Broughton Castle is a rural treasure wrapped in a moat in a grassy glade just south of Banbury and it is hosting its first art exhibition for many years, as Artweeks artist Ronny Loxton presents a series of paintings inspired by the castle and the wildlife in the surrounding countryside.

Throughout May, in a long-beamed attic space above what was once the stables but is now a charming tea-room wrapped in wisteria, the pictures depict the building and the rural environment that surrounds it. “The space was once a series of rooms for travellers,” explains Ronny. “In the Middle Ages, the Lord of the Manor was obliged to give accommodation to travellers passing through.” It is now home to cattle and sheep, hares, birds and butterflies in delicate watercolour and acrylics, landscape paintings brightening the ancient whitewashed walls and their fresh palette evokes the joy and simplicity of rural life.

For the last thirty years, artist Ronny Loxton has lived in the neighbouring village of Swalcliffe – and her home and studio are only a mile from the castle as the crow flies. “My art connects me to the countryside where I live and work,” says Ronny, “from the goldfinches which come to feed just outside my studio to the hares and deer that run across the expanse of Madmarston Hill.”

“My favourite walk takes me to the castle across the fields,” she says. “As I crest the hill, there’s a magnificent view of the castle set in its park land, and the spire of the church alongside. The house has stood there since the 1300s and there are no other houses in sight, so it feels totally timeless. It’s magical in all seasons although my favourite is the summer when the sun is out and the colour of the ironstone (an iron-rich limestone that weathers to a rust-red gold) really shines. The sheep graze under the ancient oaks, or the house is reflected in the water of the moat when the sky behind it is blue – there are so many elements to the natural beauty and they’ve provided me with endless inspiration. I have painted the house from different angles and the flora and fauna in the parkland from grazing English Longhorns, a friendly and placid breed to the bright pink-red spindle berries in the hedgerows. I’ve have painted lots of hedgerows recently because they’re a wonderful contrast to the sweeping panoramas and yet equally fascinating. Look carefully and you see they are packed full of details which change every time you come by. In the winter the leaves were frosted and cobwebs glisten, then in the summer they are dense and green with peeping birds and a butterfly or even a mouse. There are foxes and badgers and hares too as well as lots of squirrels, and on the moat, there are swans most years, and several resident herons. You can see ducks and geese, the occasional kingfisher and, if you’re very lucky, otters.”

“Inside, the house resonates with the history of the last five centuries. The façade dates from the 1550s and since then very little has changed inside. Whereas many stately homes were significantly remodelled during the Victorian era, at the time the family had little spare money and so Broughton escaped major alterations. There are arched doorways and windows, giant heavy wood doors, a spiral staircase and decorative vaulted ceilings, stone passageways and iron lantern fittings. It’s like stepping back in time and as a result has been used as a set for countless films. From the windows and the roof, the views are beautiful. The Ladies Knot Garden is particularly amazing in the summer when it comes alive with roses: as you walk through them you are enveloped in their scent.” Ronny continues.

Inside there are many decorative touches inspired – like Ronny’s work – by the natural world. The green man appears as two corbel heads in the arched stone passageway, his face surrounded by foliage as a symbol of fertility, renewal and spring. A bird and a pair of snails are carved into one of the fireplaces, and look carefully in the dining room to the left of the window and there’s a small carving of the house itself with three sheep that signify the trade from which these landowners earned their money over the centuries.

There’s old art too, and intriguing questions about whether the paintings are what they seem. For example, why was a Dutch merchant hung among the family portraits, and was the painting of Oliver Cromwell really painted by the royalist painter Dobson?

In Queen Anne’s room, named for its most famous guest, her portrait by Flemish artist Paul von Somer, hangs above the fireplace. From this room, there is an internal window or ‘squint’ into the castle’s small chapel giving the resident privacy to pray it without leaving their room. The tiny chapel was consecrated in 1337 and has the original encaustic tiles on the floor and a fixed stone altar, a style of which most were destroyed by Henry VIII or Oliver Cromwell because they were associated with Catholicism. Above two stunning stained-glass windows colour the light that streams in, one of which incorporates old roundels from the 14th, 15th and 16th centuries.

In an adjacent room off the gallery on the first floor, which resplendent with the faces of the family from generations previously including a Gainsborough, the Bury Lodge Room is decorated with hand-painted wallpaper with striking flora and birds of paradise, an early interior design method of bringing the beauty of the natural world into the house.

In the Kings Chamber, the décor is also dominated by beautiful hand-painted wallpaper, this series imported from China: the wallpaper was numbered so the strips could be hung in the correct order – however the numbering was in Chinese and so there are those who suspect the order in which they are displayed is not what was originally intended. With equal impact an impressive stucco over mantle depicts dryads dancing around the foot of a sacred oak. Whilst the scene is beautiful, it is taken from a dark verse by the Roman poet Ovid. The King of Thessaly ordered his men to cut down the trees in the centre of a sacred grove, and cutting the largest one down himself he struck one of the dryads with his axe, The dryad cursed him with insatiable hunger and so the King, first treating his daughter abominably, finally ate himself into oblivion. Today this story could be considered to carry a strong ecological message reminding us all about the value of trees and the wildlife that lives within them, a message which Ronny’s paintings gently reiterate.

The Music Room by William Fiennes, an autobiographical novel about his childhood in Broughton Castle.

Written in flowing poetic prose that meanders gracefully through rich detail to enchant all the senses, The Music Room transports the reader right into William Fiennes’ childhood and stories of an ordinary boy growing up in extraordinary circumstances. The youngest son in a loving family, Fiennes just happened to live in a medieval castle with a crenelated skyline and a moat in North Oxfordshire. You might assume this brought with it extraordinary privilege but amongst descriptions of learning to ride a bike in The Great Hall, exploring vast dusty attics, watching film crews come and go and finding cannon balls in the moat, many of Fiennes’ recollections could equally be lifted from the memories of a ‘universal’ 70s child living in an estate house, a four-square new build rather than an old tied cottage where peacocks spied through leaded windows stride across freshly mowed lawns. 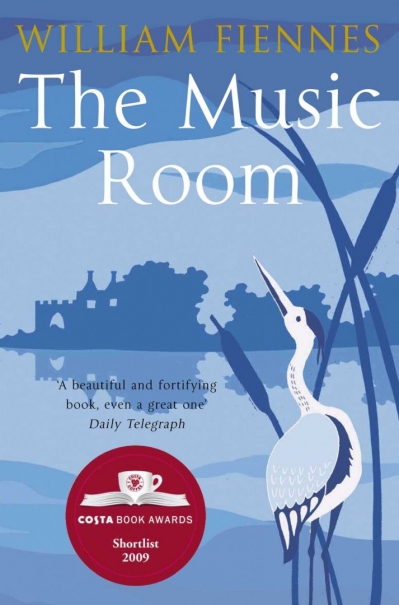 The castle itself was both a fascinating playground for a curious child and a challenge to the family, a much-valued legacy that endowed draughts, bills and a deep sense of responsibility. However, it is presence of Fiennes’ eldest brother Rich in the pages that sets this novel and Fiennes’ childhood apart. Eleven years older than Fiennes, Rich had a loving nature, plenty of playful enthusiasm and an absolute obsession with Leeds United. He also suffered with a form of epilepsy: brain damage sustained and the drugs used to control his seizures were the cause of difficult character traits and mood swings which made Rich aggressive and violent.

With true understanding of the biological underpinning, shared with the reader in brief forays into nineteenth century medical history, and with a calming sensitivity Fiennes gives an honest insight into a life in which these challenges were merely a part of the normal day-to-day. Told in cheerful and fresh anecdotes with the warmth of a simple summer day despite gathering clouds on the horizon, The Music Room is a thoughtful and moving testament to the relationship between Fiennes and Rich, to the admirable strength and forbearance of Fiennes’ parents and to the enduring depth of family love.

POP ART PIONEER ON SHOW AT THE BASE

This year’s on form promises much for visitors to this Cotswolds institution.