Behind the Scenes of the Laboratory

“delve into the past with a trip back in time to hear more about Jenner and take a fascinating diversion into Typhoidland with games, animation and activities”

Oxford and Oxfordshire are internationally-renowned for world-class science and here, during IF Oxford, the science and ideas Festival, we explore two cutting edge labs as they develop a vaccine for COVID-19 and harness the infinite power of the sun.

On the top of floor of ‘The Green Building’ on Old Road in Headington, you’ll find The Jenner Institute, named for Edward Jenner (1749-1823) the father of vaccinology. In 1876 he discovered that milkmaids who had previously caught cowpox were protected against small pox, one of the deadliest diseases known, which at the time killed a tenth of the population. The term vaccine is derived from the Latin name for cowpox, Variolae vaccinae. Jenner’s discovery has probably saved more lives than that of any other person, and in 2002 Jenner was named in the BBC’s list of the 100 Greatest Britons. He is commemorated in bronze at the entrance to the building. 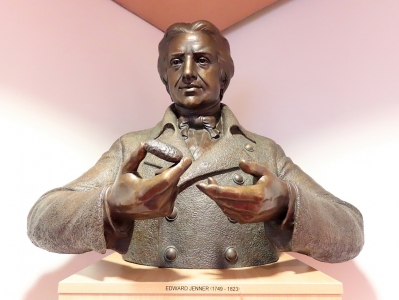 Public interest in the Jenner Institute and their work with the Oxford Vaccine Group on developing and testing a COVID-19 vaccine is high.

In recent years, during September the Jenner Institute has welcomed visitors to explore the lab in person as part of Oxford’s annual Open Doors event. This year however, in collaboration with the Oxford Vaccine Group, given physical and social distancing measures and the team’s increased workload, they instead are offering tours as part of IF Oxford’s Explorazone Digital on Saturday 17 October.

The past: delve into the past with a trip back in time to hear more about Jenner and take a fascinating diversion into Typhoidland with games, animation and activities as Lewis Carroll’s Alice discovers the murky underside of the ‘swampy’ city of Oxford. Typhoid, a killer of paupers, princes, and presidents, influenced the design of the water and sewage systems under our feet. The riddle of mysterious typhoid outbreaks in the Victorian era, solved by doctors and engineers, has implications for the ongoing worldwide fight against typhoid.

The present: take a 360° interactive stroll through the corridors of Jenner Institute’s state-of-the-art labs, ‘walking’ through their space from the safety of your sofa. Choose from video footage and information boards as scientists and researches explain how people’s blood samples are taken, processed and analysed, and how this helps us understand the complexity of the human immune system and how different vaccines work. The Institute’s candidate coronavirus vaccine is currently being trialled in healthy volunteers, across 19 sites in the UK. Researchers will be on-hand to explain their work on this and a range of other diseases too – from Malaria and HIV to prostate cancer. 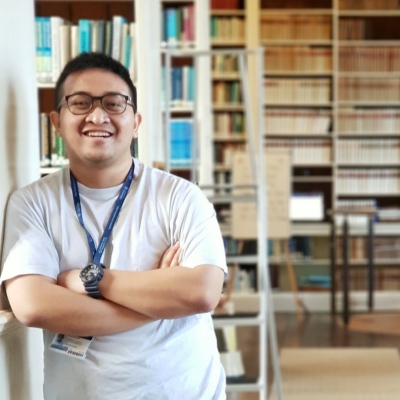 “I’m Indra Rudiansyah, a DPhil student working on malaria vaccines. Despite the significant progress that has been made to reduce the mortality rate, malaria is still a global burden. The complexity of the parasite has made developing a vaccine a challenge. No commercial vaccine is currently available: however, many have undergone clinical evaluation and two promising candidates give partial protection. My work focuses on improving these vaccines by modifying the way the antigens they carry are presented. Hopefully, this strategy will make the vaccine more effective and durable.”

Scientists from the Jenner Institute and the Oxford Vaccine Group started work designing a vaccine for COVID-19 on Saturday 10 January shortly after the SARS-CoV-2 was first detected in China, and before the world was in the grip of the current pandemic.

The vaccine uses a weakened version of a common cold virus from chimpanzees, which has been modified to include the genetic sequence of the club-shaped protein spikes on the coronavirus’ outer coat. It is hoped that this vaccine will successfully prime a person’s immune system to recognise and attack the COVID-19 virus if the body is later infected. Because the vaccine uses a non-replicating virus as a carrier, it cannot cause an ongoing infection in the vaccinated individual and this also makes it safer to give to children, the elderly and anyone with a pre-existing condition such as diabetes.

The future: consider the planning required for a future pandemic by unknown pathogen ‘Disease X’ and the speed with which the world can react at a presentation in the Explorazone Digital auditorium on Saturday 17 October. In the past, the development of a safe and effective vaccine was expected to take ten to twenty years, a timescale that has been compressed beyond all expectations in 2020 as Oxford responds to COVID-19. This raises interesting questions about the way vaccine research will evolve in future including collaborations between academia and industry to enable the production of new vaccines in large numbers at speed.

In Culham, a series of unassuming low-rise buildings wrapped in a curve of the Thames, house UK Atomic Energy Authority (UKAEA) scientists and researchers working to create a new form of safe and sustainable low carbon energy. UKAEA is the UK’s leading fusion energy research lab looking to recreate a star: the sun is our solar system’s natural fusion reactor. Fusion is a process in which hydrogen atoms zip around at high speed and high temperatures, occasionally colliding and fusing together to form helium, a reaction that lets stars give off both heat and the light we see here on Earth. 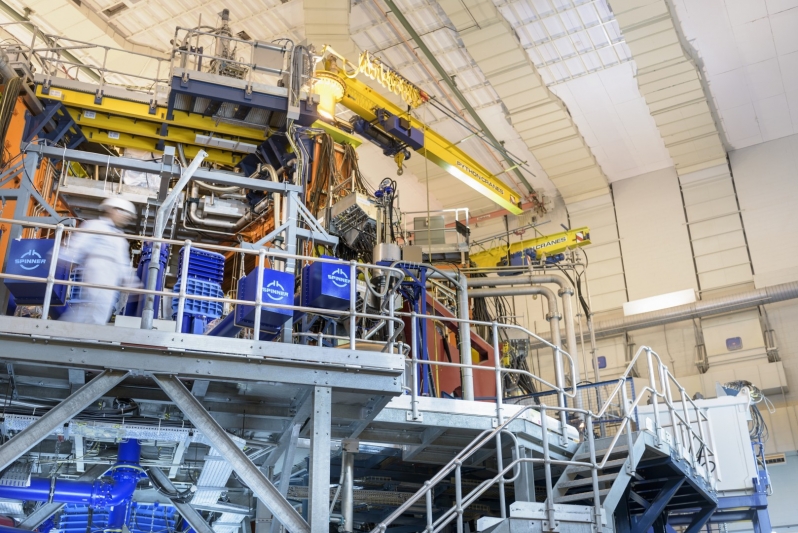 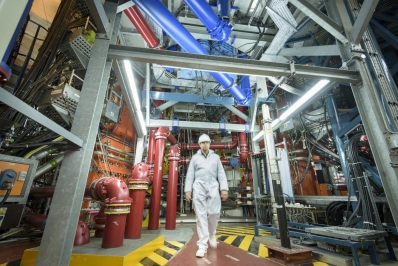 The sun is 15 million °C at its core. On Earth, because we are recreating the sun’s conditions in miniature, to get the same fusion reactions, the temperature required is 150 million °C, ten times hotter than the sun. In Culham, this reaction is recreated in one of two fusion machines. The first is JET (Joint European Torus) which is the largest in the world at three-four storeys high and it is used by scientists from all over the EU as part of the EUROfusion research programme. Less than half the height, the second is MAST Upgrade, a more compact and condensed version which is more efficient and will offer greater flexibility to power stations in the future.

Both machines are essentially large doughnuts or ‘tokamaks’ of metal and magnets (tokamak is a Russian abbreviation for Toroidal Chamber with Magnetic Coils), and it is the magnets that contain the heat from the atoms within a vacuum chamber within the doughnut’s ring. At extreme temperatures the hydrogen atoms turn into plasma, the fourth state of matter beyond solid, liquid and gas, produced when the atoms in a gas become ionised. 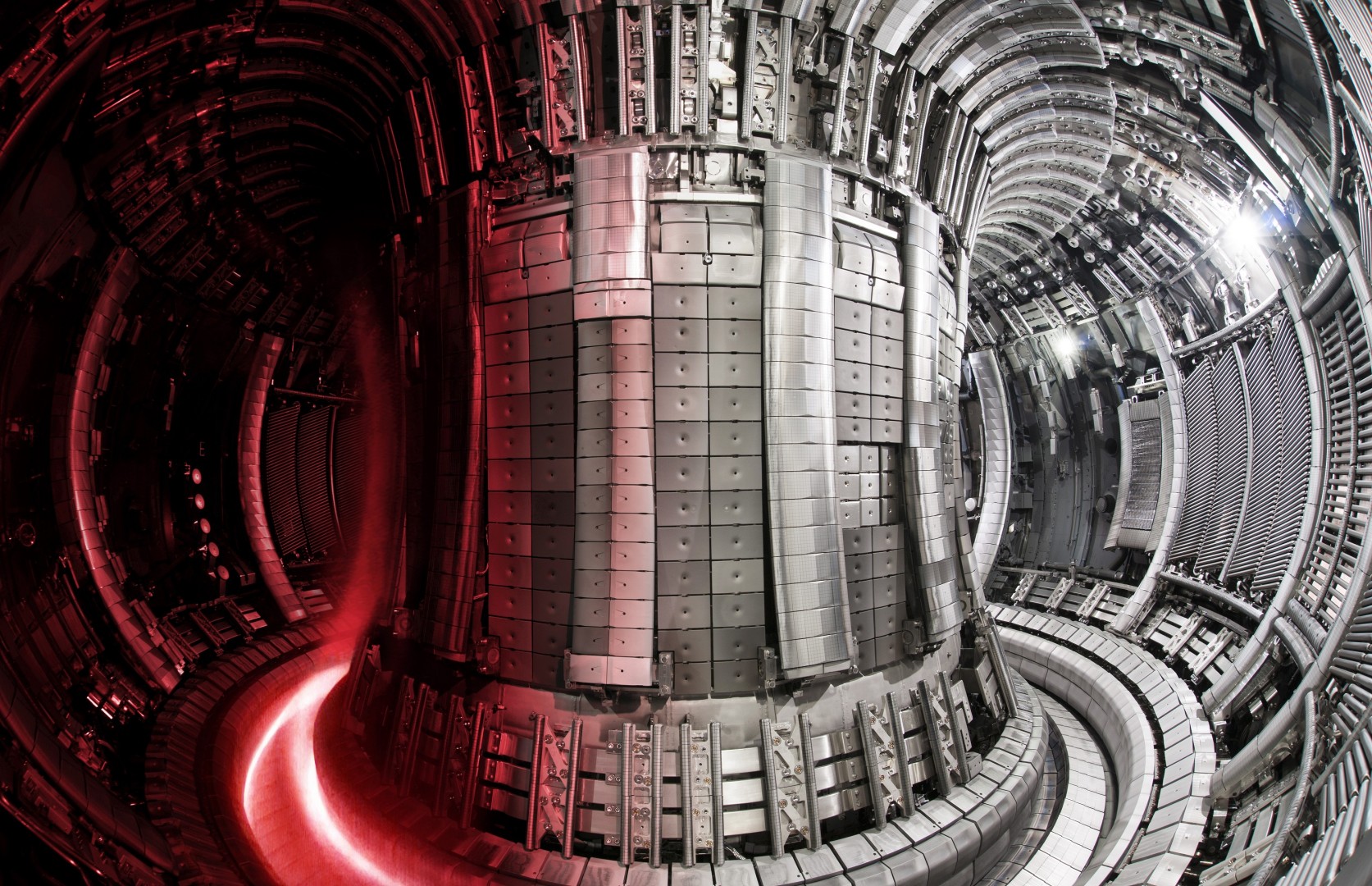 Both JET and MAST Upgrade are experimental devices that produce power allowing scientists and researchers to understand conditions required for best harnessing energy created within them, so that the technology can be used later in future power stations. Scientists are also working on developing a ‘lithium blanket’ to absorb energy from these neutrons created during the fusion reaction and turn this into heat which in turn generates steam to turn turbines and make electricity.

Currently, nuclear power stations use fission – or the splitting of giant unstable atoms – to generate radiation and heat. However, there is the possibility of explosive runaway chain reactions if the process is not carefully managed: this can’t happen with fusion and so it is a much safer method of generating sustainable energy for the future.

During IF Oxford the team at UKAEA is inviting visitors to a series of talks and events. These include an introduction to fusion (A fusion future: Friday 2 October) and the creation of a ‘star’ on Earth; and a look at their latest materials research (Super materials for extreme conditions: Sunday 18 October), a recent growth area. Because of the extreme temperatures at which fusion takes place, materials scientists have had to find new materials or metal variants in order to build machinery that can absorb or withstand the heat and radiation as required. At Culham, UKAEA specialises in taking tiny samples of new or upgraded materials and testing them under extreme conditions of heat and pressure, stretching on a very small scale to see how the conditions change them.

The UKAEA is also developing robotic tools (The challenge of remote engineering: Sunday 11 October) to repair and upgrade the machines without the need for humans to venture inside the reactor doughnut, minimising the risk of any low levels of residual radiation. In the JET machine, for example, the robot MASCOT has long snake-like arms with a choice of attachments. It is controlled remotely, and the technology currently in development could also be relevant in deep sea exploration or in space.

On Saturday 17 October, 8am-9pm in the IF Oxford Explorazone Digital, visitors can also chat live with researchers throughout the day, and enjoy ‘demos from dining tables’ as scientists perform home experiments and encourage families across the county to recreate these experiments themselves.

The UKAEA are also hosting a conversation between an artist and a scientist on the different approaches to fusion and invite you to be part of an art competition. The art of fusion, Friday 9 October

“My name is Holly Campbell and I'm an experimental materials scientist at the UK Atomic Energy Authority. Some of the biggest problems that society is facing right now are global warming and climate change. At UKAEA, our goal is to harness the energy which powers the sun, fusion energy, to provide a low-carbon and sustainable energy source for our future. To initiate fusion on Earth, one route involves building huge machines called tokamaks. That's where I come in! Tokamaks use powerful magnets to heat up hydrogen fuel to extreme temperatures and then to confine and control hot fusion plasma. I test these magnets to help keep our artificial sun hot and capable of producing energy!” 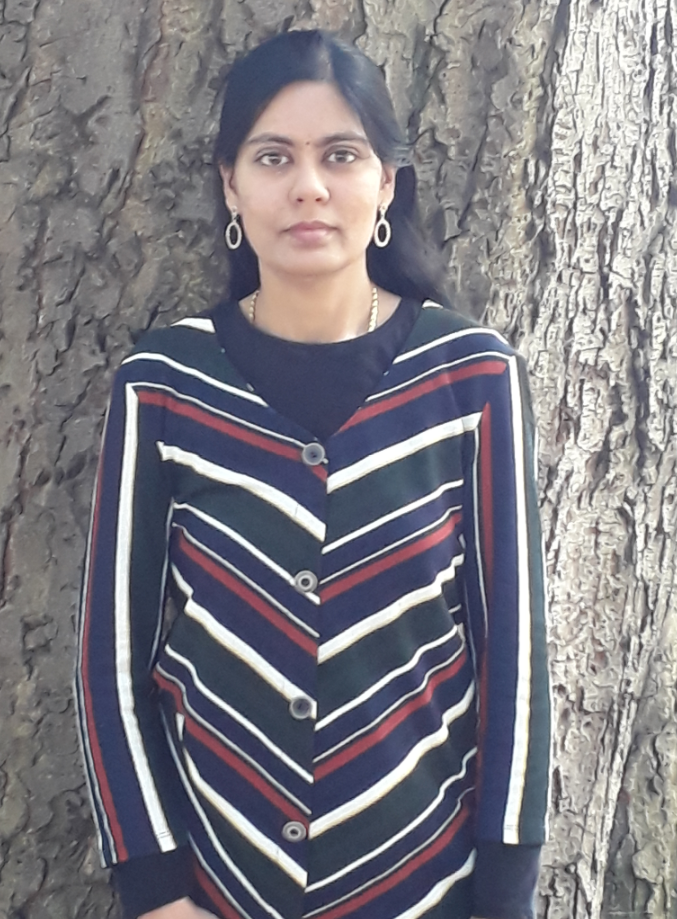 To describe astrophysicist Dr Becky Smethurst as a rising star might be a pun, but it’s also true. Her most recent award (from the Royal Astronomical Society) recognises her ground-breaking research, and she has also been both awarded and applauded for her contribution to public engagement in Physics.

Advancements in The Science of Diabetes

This year marks the 100-year anniversary of the discovery of insulin, the hormone responsible for regulating blood sugar levels in the body. We talk to Branwen Bindra, a volunteer with Diabetes UK, and Oxfordshire mum Sam, to hear their stories.

The history and health benefits of Coffee

From lattes and cappuccinos to macchiatos and frappuccinos. Cold brew, hot brew and dairy free options all to be tweaked with an ever-expanding list of syrups. What’s not to like? I suspect coffee is here to stay and I for one am extremely happy for it.