“Oxford Physic Rose will be launched officially this year at the Chelsea Flower Show on May 23 by Peter Beales.”

Dr Chris Thorogood, Deputy Director and Head of Science at the Oxford Botanic Garden and Arboretum

The pandemic highlighted the importance of gardens and green spaces for people’s mental health and wellbeing. During its darkest moments, Oxford’s Botanic Garden in the heart of the city provided this for residents, as it has for four centuries. In celebration of the 400th anniversary of the UK’s oldest botanic garden, a new hybrid rose has been created by Peter Beales Roses Ltd. What could be more germane to mark this historic anniversary than a rose for a garden located on Rose Lane? The idea was conceived in 2017 by Dr Suzanne O’Shea (partner of the Botanic Garden’s Director, Professor Simon Hiscock) who then worked with Peter Beales chief rose breeder, Ian Limmer, to develop the delightful new rose. A colourful assortment of new hybrid cultivars was carefully evaluated against a set of chosen characters and in July 2020 the decision was finally made: a repeat-flowering shrub rose with highly fragrant open-cup flowers, ideal for bees. A classic rose that speaks of heritage which is also perfect for gardeners and pollinators alike. 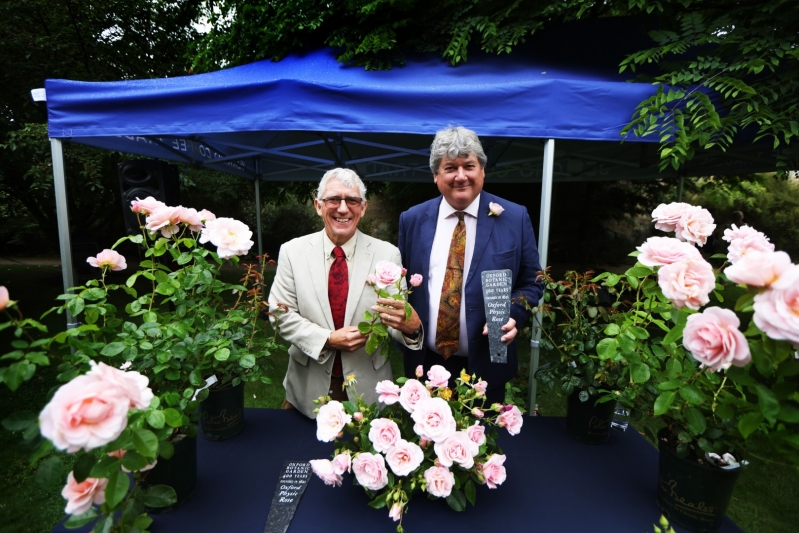 A potted specimen was given to His Royal Highness Prince Charles, Patron of Oxford Botanic Garden, when he visited on June 8 last year to acknowledge the Garden’s anniversary. HRH was told how one of the parents of the hybrid rose was ‘Sandringham’ created by Peter Beales for the Royal Estate and he was delighted with the gift. Professor Hiscock then revealed the new rose to the Chancellor of the University Lord Patten of Barnes and 50 guests on July 25, 2021, the day marking the 400th anniversary of the founding of the Garden. Here, the long-awaited name was announced: Oxford Physic Rose, in honour of the Botanic Garden’s inception in 1621 as a physic (medical) garden, where plants were originally grown for teaching Oxford’s medical students. Mr Limmer, who also attended the ceremony, gave a masterclass in rose budding and grafting, and described Oxford Physic Rose as “a shell-pink shrub rose with all the characteristics of a classic old-fashioned rose, including a sweet and strong scent, yet with the qualities gardeners have come to expect from a contemporary rose, such as robust health and vigour, and repeat flowering.”

In his speech, Professor Hiscock explained how “Roses have always been a part of the fabric of Oxford Botanic Garden. They are the national flower of England, a symbol of peace and an important source of inspiration behind artistic, poetic and literary endeavour. Their natural oils and perfumes also benefit our health and wellbeing in so many ways, symbolising the Botanic Garden’s 400 year history as a place of healing”. Indeed, wellbeing now sits high on the agenda of Oxford Botanic Garden and its satellite Arboretum at Nuneham Courtenay, who offer courses in yoga, aromatherapy, and forest bathing. Plans are in place to treble the number of visitors at the Arboretum with a future Visitor and Learning Centre and an improved paths network increasing access to nature, and all of the wellbeing benefits this brings.

Oxford Physic Rose will be launched officially this year at the Chelsea Flower Show on May 23 by Peter Beales. Following the launch, the rose will be available commercially through Peter Beales and at Oxford Botanic Garden, where 250 potted plants will be sold exclusively. The rose is already prospering in several stations across the Botanic Garden, and it is proving to be an ideal specimen for a border, trained as a small climber, or for growing in a pot.

Do come and visit this summer and admire the new celebration rose. See our What’s On page (obga.ox.ac.uk/whats-on) for details on when to visit; you will discover a hive of activity at the Botanic Garden.