Cj Zangerle Murray is an Argentine/English queer, trans, visual artist, musician and educator based in the North East, with an MSc in neuroaesthetics. They’ve worked in schools and on creative community projects with children and young people from a diverse range of backgrounds. They are an LGBTQIA+ awareness trainer for Curious Arts – an organisation developing LGBTQIA+ arts and artists in the North East. Speaking from Newcastle, ahead of their Glow Your Own project for IF Oxford, the science and ideas Festival, Cj talks about place, gender, mental health and more. They work at a lively, friendly bar and as a horticulture volunteer at a community garden.

I was born in Sardinia but have lived most of my life in Leicester. I moved to London for two years to do a master’s and lived in Spain for a bit as well. Then I came to Newcastle in January, I love it up here. I have come out of a darker place and am feeling stronger in myself. I am becoming part of a friendly community, both through lovely  encounters with other  dog walkers and through my various  jobs. This is giving me a humbling sense of who I am as part of a wider wonderful life team! Up here, there’s a real sense of community; friendly and welcoming – really important to me as a general grounding. Because of that, I feel more comfortable in my job roles (and social life). I think if I hadn’t made the connections and friends that I have in Newcastle, I probably wouldn’t feel as comfortable being in the world. I wouldn’t be as adaptive or hardworking. My intense passion for bouldering/climbing also has a lot to answer for! While loving and deeply appreciating the city I am making a home in, the beauty of Zoom has allowed me to also connect with people from different cities and places and opened up this wonderful opportunity to work with a different city, i.e. Oxford and be part of the Glow your Own series and soon the glorious lights festival. I am so honoured to have been asked to deliver the sessions by the IF Oxford science festival team and Fusion Arts.

I’m reading a book on the breath at the moment because I’m really interested in breath work to help with lots of different body and mind things. It’s called  Breathe Well  by Aimee Hartley. I have also just started reading a book called Felix Ever After (Kacen Callender) which is a trans love and identity story. Another book I really enjoyed in the last few years is called  Gender Queer by Maia Kobabe.

I feel quite fixed in my gender, settled in being trans and trans-masculine. But I feel a sense of freedom and  fluidity within that, with how I exist. I usually identify as they/he. I’m just  being, and really happy being right now. I feel comfortable in my gender and sexuality at the moment, so that’s nice – I haven’t done, for a long time.

Recently I’ve wanted  to emphasise that the words ‘mother’ and ‘woman’ are not being removed for  trans folk. It’s not about removal, it’s about including other words, giving space to trans people. Some trans men, or people who don’t identify as mothers or women, are still able to give birth and chest-feed, so we need terms in addition to ‘mother’ and ‘breastfeeding’. 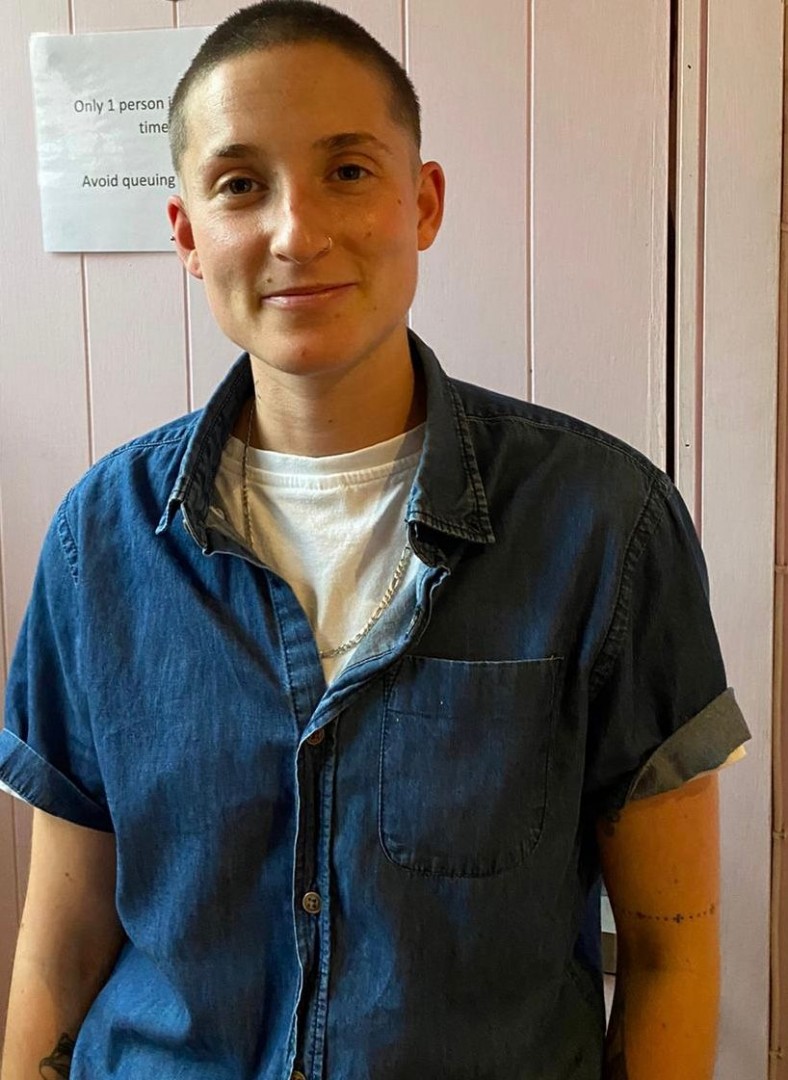 We’ve just finished preparing for the Glow Your Own series in Oxford – I jumped on that in the latter part of last year. We created a nature-inspired, conceptual piece of art with LEDs blinking on and off by use of a touch button, then we incorporated that into chosen sculptures. Most recently we made a cloud; the LEDs would be triggered so it looked like raindrops were falling from the cloud – or an alternative design was to have the LEDs within the cloud itself to look a bit like thunder. We’re now ready to present a series of six workshops within IF Oxford, the science and ideas Festival, for people to create a home sculpture, and at the same time, make a much bigger installation. I’ll be doing weekly Zoom sessions with collaborators from STFC in Harwell and Science Oxford, using the basic techniques of coding and Arduino-making that could potentially build and build to allow people to create a really big installation like ours. The idea is to do scaffold learning, so we’re building and building rather than starting from scratch each week. We’ll start from the basics (so anyone can join in!) and get a little bit more complicated as we go on, and then eventually people will see what we made at the Oxford Christmas Light Festival in November and think, “ah, I could potentially do this one day myself.”