The Loveliest Place in The World

If you are looking to escape for a few days this spring, why not take a trip down to the Dartmouth area of Devon where you can spend a leisurely day enjoying the place the bestselling fiction writer of all time, Agatha Christie, and her family spent their holidays.

Born on the English Riviera in the South Devon town of Torquay in 1890, she continued to hold the county with its beautiful scenery close to her heart all her life.

Following her second marriage to archaeologist Max Mallowan, and already a successful writer, in 1938 Christie purchased the Greenway estate on the River Dart, with its Georgian house, to use as a holiday home. She later described the property with its glorious gardens as “the loveliest place in the world”. 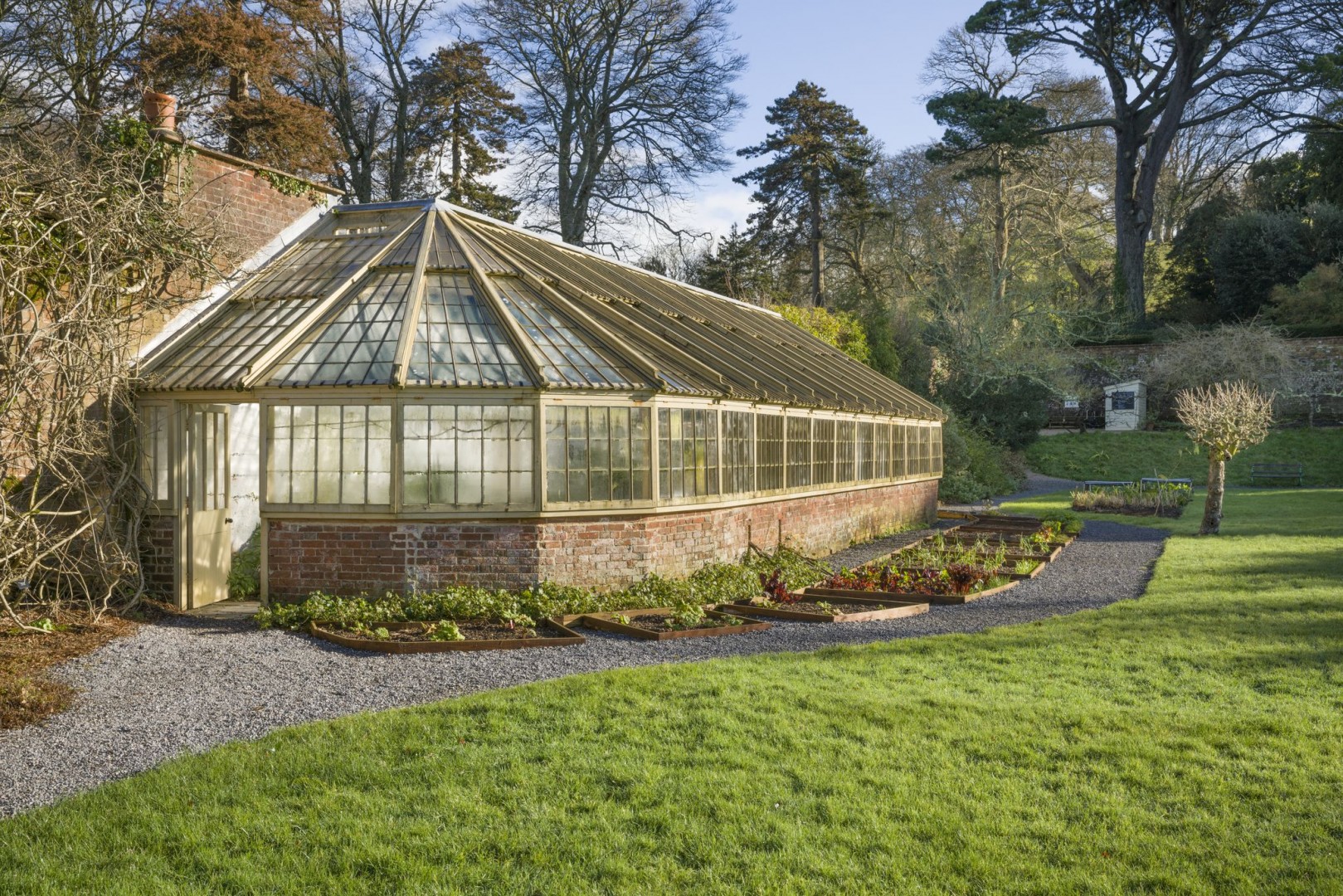 Whilst not spending time writing novels at Greenway, she found much inspiration from the house and grounds – three books were directly inspired by the property. Details of the house and exact descriptions of the lane leading up to it appear in Dead Man’s Folly, with the boathouse used as the murder scene. The writer’s descriptions were so accurate that in 2013 ITV filmed their adaptation of the novel at the property.

In Five Little Pigs, the lead character’s Devon home of Alderbury is inspired by Greenway, the Battery Gardens being where her husband’s body is found. In Ordeal by Innocence, the setting for the story is along the River Dart to Dartmouth, renamed Drymouth. Under normal circumstances, visitors to Greenway can travel up the river from nearby Dartmouth and Dittisham approaching the property from the riverside.

Christie and her family were great collectors and today the house, which is in the care of the National Trust, is a treasure trove filled with ceramic collections, Tunbridge ware, silver, and first editions of her novels. It is also home to numerous artifacts collected in the Middle East by her husband on his archaeological excavations. The house was requisitioned by the US Coast Guard during World War II and the library contains a frieze painted in 1944 depicting the troops preparing for the D-Day landings. 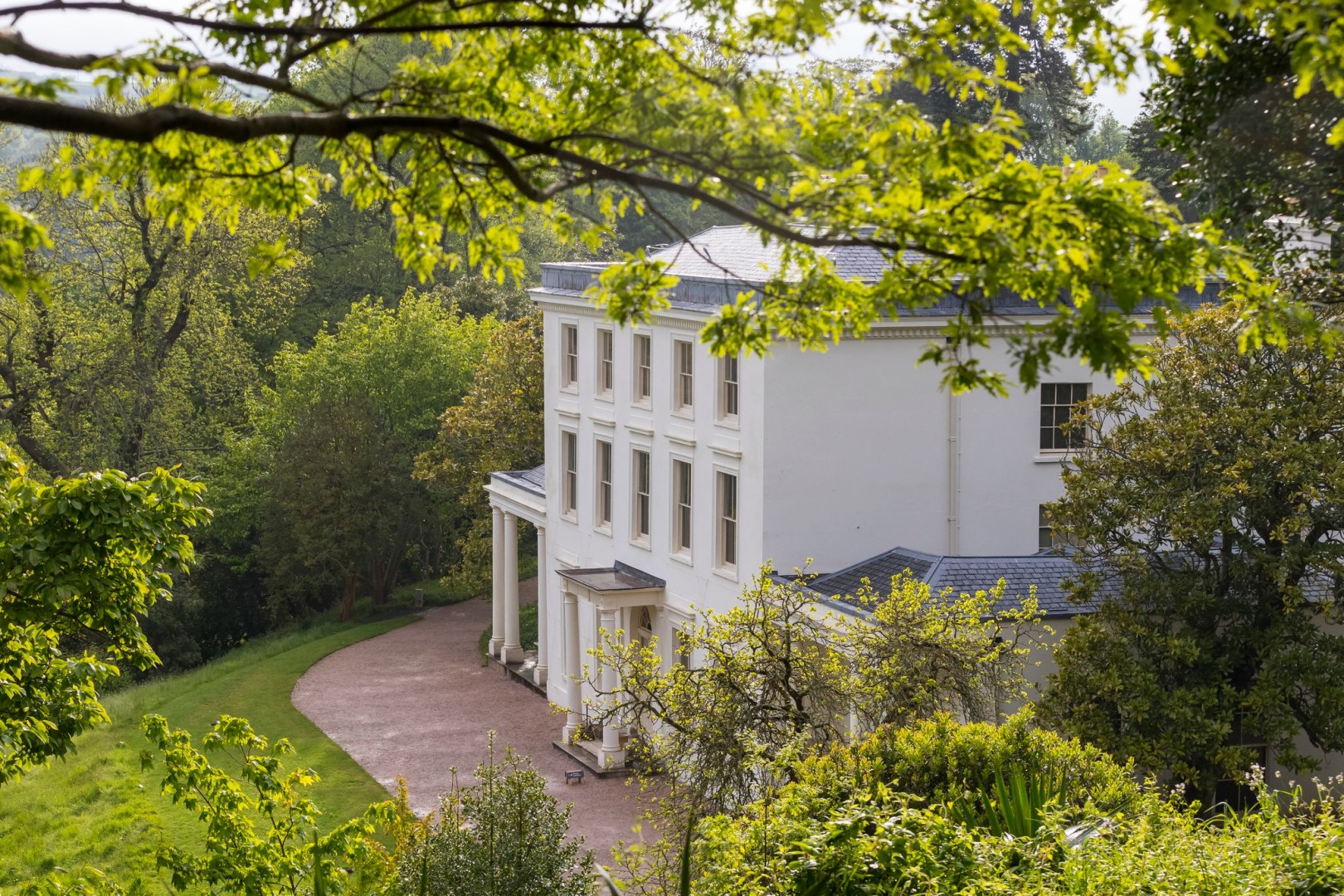 The gardens at Greenway have been accredited by the International Camellia Society as a ‘Garden of Excellence’ and certainly springtime is an excellent time to visit. With its profusion of flowers, you will marvel at the array of camellias that flower from February until April. The historical walled camellia garden by the river was once an aviary and an ideal spot to enjoy the blooms. There is also an abundance of camellias along the driveway and the middle path. To add to the spectacle, swathes of snowdrops flourish in front of the house running down towards the river, and there is an abundance of daffodils, including Narcissus cyclamineus and cyclamen all around the grounds.

As spring progresses, magnolias and rhododendrons, including Rhododendron smithii located next to the tennis court, add to the riot of colour, all set against the backdrop of the River Dart. 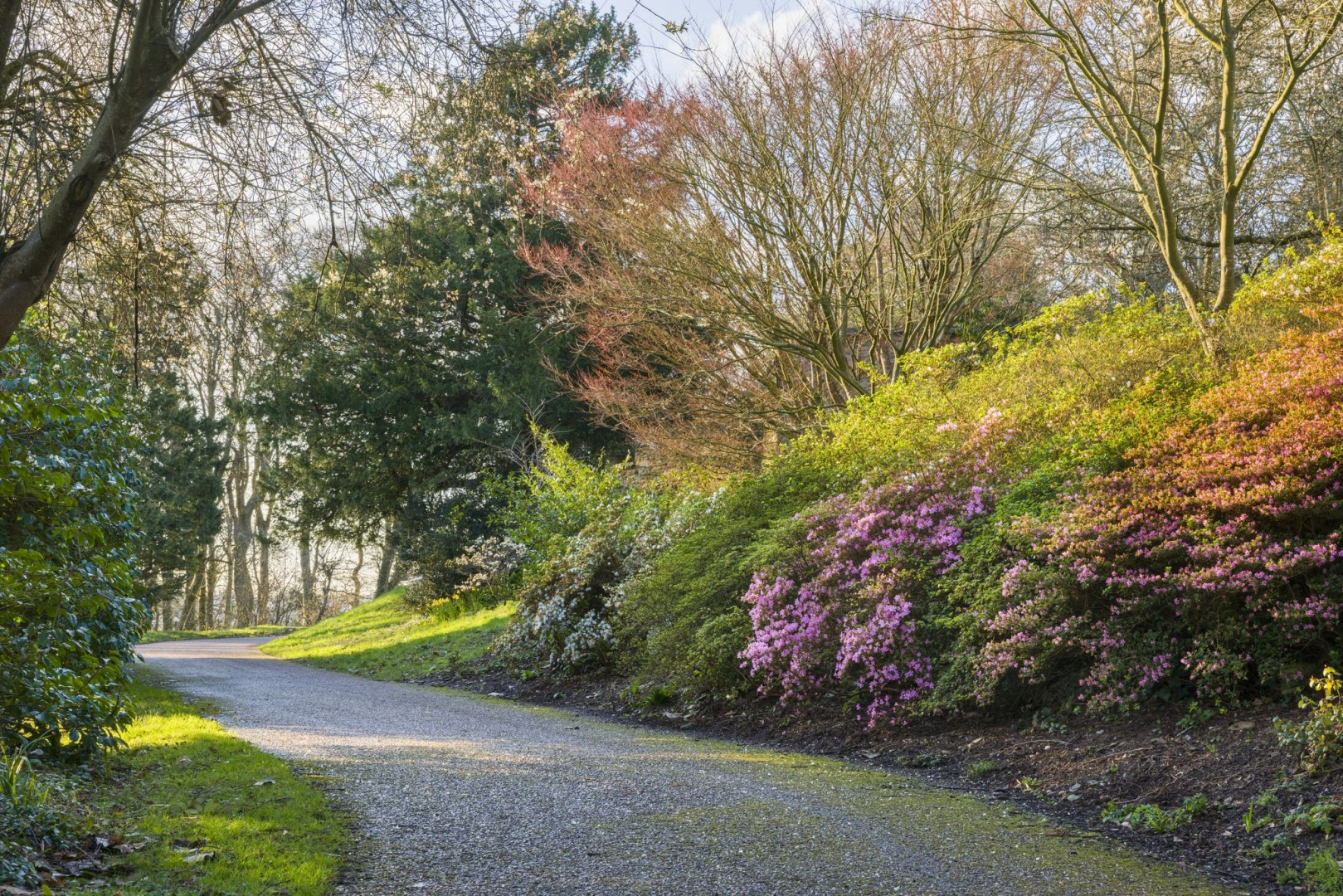 As you walk through the Walled and Top Garden, you will see Iberian comfrey used as ground cover in the borders. Hellebores, planted by Christie’s daughter Rosalind Hicks, bloom in profusion close to Clock Golf, whilst the Top Garden, a current restoration project, will have borders that are a riot of hot colours by the summer. From this part of the garden, you will get the best views of the River Dart leading down to Dartmouth.

The walled gardens are the location for the peach house, vinery, vegetable plot and Galmpton School’s allotment. All thriving in the sheltered environment provided by the high walls. The South Walled Gardens are planted with soft borders where hydrangeas bloom in summer and there is a large lawn area to sit and relax.

There is a recently restored Fernery which provides a place of unrivaled tranquillity within the garden. Dappled light and shade fall upon the fronds and the central water feature creates a magical atmosphere on a sunlit day. The Fernery is also home to Christie’s dog cemetery. She was a true dog lover and even today, you can bring your dog into the grounds provided it is kept on a short lead and you act as a responsible owner.

If you are a keen Poirot fan, your visit would not be complete without seeing the Boathouse which has recently been restored, both inside and out, to ensure it survives for all to enjoy. The nearby Battery, built as a Napoleonic defence in 1790, is located just along from the Boathouse.

For further information on how to book tickets to visit Greenway, visit nationaltrust.org.uk/greenway

The Trust also has several holiday cottages available to rent in the area which are shown on their website. 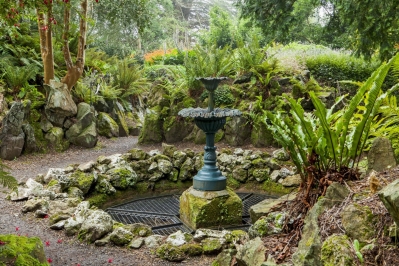 Optimised Independence at The Mobility Store

The final phase of work at The Mobility Store in Wroughton, has now been completed and the new division called Optimised Independence opened on the 5th of October.

Since the age of man, fire has been a necessity In the modern era, it has become both a comfort and a luxury, and there is nothing more luxurious than a beautiful flickering flame in your home. Or in your garden. Our gardens have always wanted to be a part of the house, becoming that additional room to our homes; no more so than over the past 18 months.

People across Oxfordshire are being encouraged to consider becoming foster carers. The appeal comes from Oxford city resident Samantha Allen, who talks with pride about the babies – and babies with their mothers – she has welcomed into her home over the last 12 years.

Whether you’re looking for the perfect gift for the gardener in your life, or are just wanting to pretty-up your outside space, we have a selection of buys for the Great Outdoors.