“We’ve teamed up with world-leading live online events platform Crowdcast so that we can continue to offer the best possible experience for authors and audiences alike.”

Henley Literary Festival is going online this autumn, with over 40 events for adults and children covering fiction, sport, entertainment, politics, history and more delivered right to where you are. 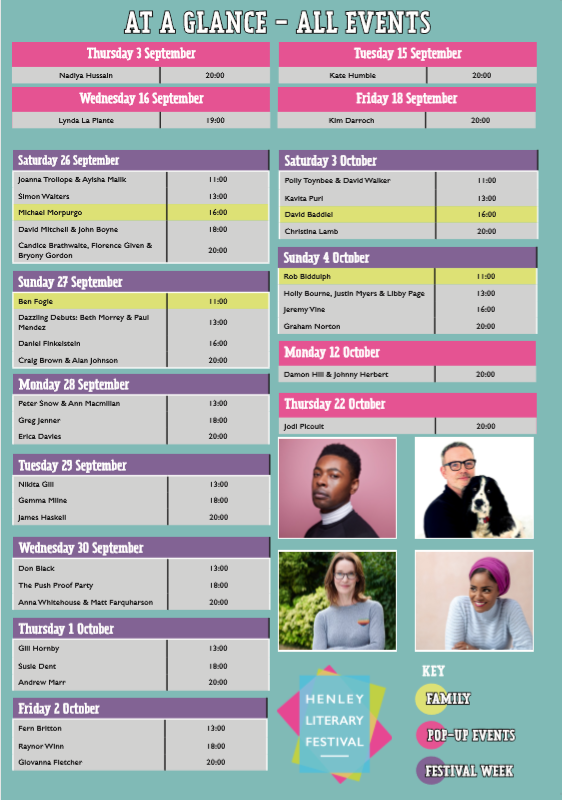 During the originally planned dates of September 26 – October 4 there will be between three and five events every day, with speakers including Graham Norton, Joanna Trollope, Michael Morpurgo, Countdown star Susie Dent and former England rugby international James Haskell. The writers behind several of 2020’s most-talked-about books will be appearing, including I Am Not Your Baby Mother author Candice Brathwaite, Sunday Times foreign correspondent Christina Lamb with Our Bodies Their Battlefield, Rainbow Milk debut novelist Paul Mendez and Women Don’t Owe You Pretty’s Florence Given.

In addition there will be pop-up events before and after, starting with Nadiya Hussain on September 3 and also including international bestsellers Lynda La Plante & Jodi Picoult, former US Ambassador Kim Darroch, Kate Humble and Formula One icons Damon Hill & Johnny Herbert.

Henley Literary Festival director Harriet Reed commented: “As we are unable to bring tens of thousands of Festival attendees to our wonderful town this year, we will instead be bringing over 60 brilliant speakers from acorss the country aswell as internationally right into the audience’s homes. We’ve teamed up with world-leading live online events platform Crowdcast so that we can continue to offer the best possible experience for authors and audiences alike. This wouldn’t be possible without our headline sponsor Baillie Gifford.”

The full line-up of events and booking information can be found at henleyliteraryfestival.co.uk or by calling 01491 575948.

Tickets go on sale to Friends of the Festival on August 6 and general sale August 11.