Jeremy Healy: From Blitz to Reminisce

Memories of a London freak

“I came home, I’d died my hair, and my mum burst into tears.”

It’s somewhat outside our region, but in September the fifth Reminisce Festival takes place in St Helens, welcoming D:Ream, The Vengaboys, Judge Jules, Ultra Naté, Whigfield and the renowned Jeremy Healy, who I simply couldn’t pass on talking to.

On the phone to him, my voice seems to cause a bit of feedback. “I think you’re an alien,” the DJ says from London. But it was he who I’ve read once turned up at school with his hair dyed green. “It wasn’t even green,” he tells me, after I’ve rang back off another extension, tracking back to 1976. “I came home, I’d died my hair, and my mum burst into tears.” At the Christian Brothers school he attended (St Joseph’s Academy in Blackheath), “one of the Brothers went round telling everybody that the devil was afoot – all the little kids were scared of me just because I’d died my hair.” Nowadays he spots bank clerks with barnets once considered “a form of rebellion”; at the same time, though, “kids are getting sent home from school for having Peaky Blinders haircuts – bloody ridiculous, I thought we’d got over all of that.”

Part of London’s colourful Blitz Kids four decades ago, he looks back fondly on those squatting days –forty people across three properties in one street. There was no rent to pay, he didn’t have to get one of “the really shit jobs” actually available to him. “We were penniless,” he says, “but it was a lot of fun.” He did work for a brief period at a fruit packers in Woolwich, with Boy George. He’s only had a couple of “proper jobs” in his life and that was the first. “It was a really hard job, you had to be there at 6am and work till 4pm. It was gruelling stuff, horrible, I was like ‘oh my God, is this real life?’ What made it worse was that people were quite happy in their exploited labour. We only did it for three weeks.”

He did earn alongside Boy George elsewhere, courtesy of a Philip Sallon-run club night at Planets in ’81. The first week they did, “George was DJing and I was on the coat check. I was absolutely fucking useless. It ended up with people’s coats all over the floor and everyone screaming at me.” He and George swapped duties the following week (Sallon paid the same amount to the coat check as he did the DJs). “He wanted to do the coat check because he wanted to nick all the money out of people’s pockets, which he did. Everyone was going mental at him that week.” Healy kept his DJing slot there for at least a month, earning £20 a time – “I don’t think Philip Sallon pays any more now than he did then.” Does he still see the club promoter? “I’ve seen him occasionally. He’s a little eccentric to say the least, there’s only one of him – maybe that’s a good thing. We’ve fallen out over things over the years but I wish him well.”

Insofar as keeping in touch with the Culture Club frontman goes, they’d had lunch together three or four weeks before this interview. “We were reminiscing,” says the 57-year-old, “we go so far back. We just sit down and bring up all this stuff that each of us has forgotten… then we’ll have an argument about it.” Did you? I ask. “Well, always. People remember things differently. I never read any books or anything about our history, because it often triggers a memory. You go ‘no, that’s not right’ but you can’t really argue with a book. There are a lot of different truths out there.”

In the late eighties the two of them joined forces for the acid house anthem ‘Everything Starts With an E’. Produced by Healy and Simon Rogers, it features a Boy George-penned and sung chorus, and a rap written and performed by MC Kinky. George and the rapper “had a very fractious relationship”, the producer says. “They were like Tom and Jerry.” The recording process would see Healy address people in the streets from the studio via a loud hailer, and speed up Kinky’s vocal so it was much higher in the final cut, which for two years “she hated me for”. The track went on to sell in excess of 150,000 copies.

The first person to sing in front of him was his grandfather, who he’d visit in Ireland as a kid. In pubs, he’d put him on his knee and sing ‘Danny Boy’ loudly. The young Healy would complain it was hurting his ear, and point out that his name was not Danny – his grandad would tell him to shut up. He learnt later it’s tradition in Ireland for those who do a song in a pub to be rewarded with drinks bought by the audience. “He’d go round three or four different pubs so he’d get about 16 drinks. That was my introduction to music.”

Born in 1899, his grandad could not read or write, and knew little about records. But he was alive to watch Haysi Fantayzee, the pop band fronted by Healy and Kate Garner, on Top of the Pops. Did he like the group famous for ‘John Wayne Is Big Leggy’ and ‘Shiny Shiny’? “I don’t think many people did actually,” his grandson giggles. An ex-girlfriend, ten years younger than Healy, has told him she used to hide behind the sofa aged ten when Haysi Fantayzee were on television. “I was sort of channelling the Child Catcher,” he points out. “That was the look I was going for, so it kind of worked.”

He’s long had links to the fashion industry, scoring shows of John Galliano since 1985. His association with that world – which takes him to Paris for three months of the year – might be traced back to when he was 13, hanging out at Sex – Malcolm McLaren and Vivienne Westwood’s boutique on King’s Road – where he’d go “to hide from Teddy boys and football hooligans”. He thinks he may have worked under McLaren for a spell. “Then I fell in with a load of people from Saint Martin’s art school, and I ran into Galliano. Fashion and music have always run hand-in-hand, haven’t they? They have for me anyway.” 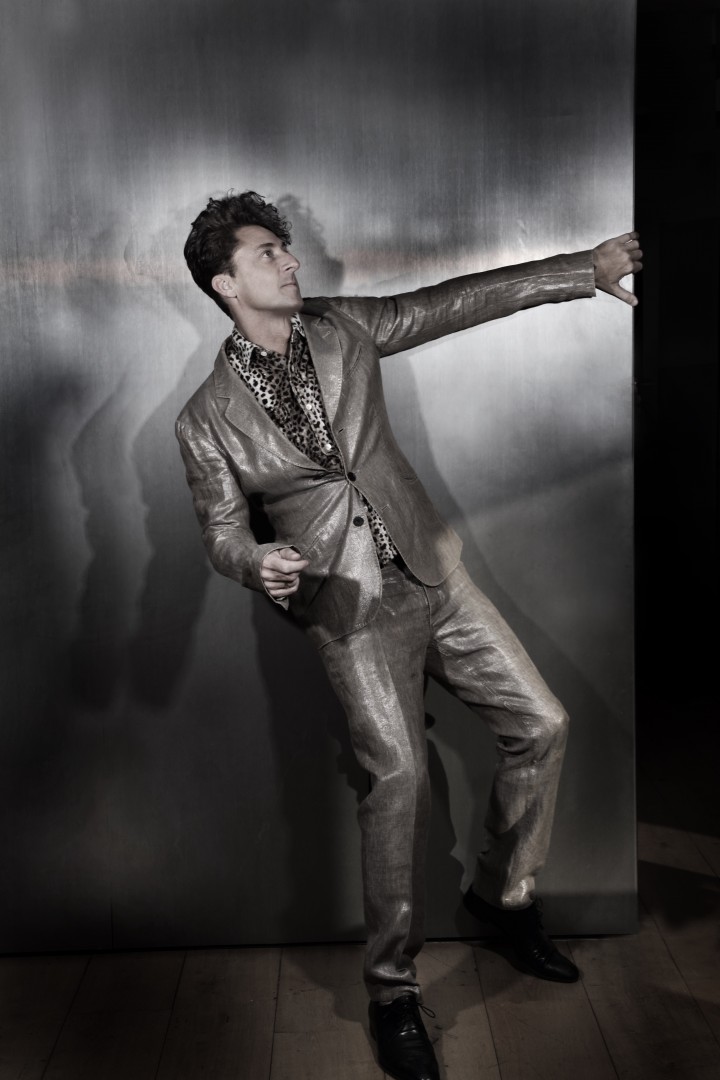 His skills have also been sought after for advertising, a lot of which took place in the eighties. One such gig was for Levi’s, interested in him because he “was one of the early scratch DJs”. Levi’s chose his track over those submitted by other artists, “not because it was better music, but it was much more jaggedly put together”. He’d get more advertising jobs as a result. Having not operated in that sphere for a while, he recently re-entered it, doing a couple of Galliano ads and working on a new Chanel one. He only wants to do the decent kind. “The shittier the commercial, the more difficult the job is.” Years back he started “at the top of the commercial world”, but did end up doing music for brands and ads lower down the pecking order. “I’m not going to do that again.”

On 7 September he’ll DJ at Reminisce Festival in St Helens, not far from Liverpool. His first time in the latter featured a trip to Eric’s Club. Margi Clarke was in attendance, and Frankie Goes to Hollywood. “They were really nice to us – I think I was up there with Haysi Fantayzee. All the Liverpool freaks had their scene going on up there.” I thought there was rivalry between Liverpool and London freaks. “I didn’t find that.” Pete Burns could cause friction, “but that’s what he thrived on; a friction creator.”

As 2019’s brought his busiest summer in years, he’s happiest “sleeping at the moment”. But he does love to DJ. “I find it really natural and feel very comfortable onstage doing that.” I wish him the best for Reminisce and he tells me to come and say hello when I’m there. I reckon I will – it’s better the devil you know.