The Rise of The Fizz

Kite: a brand-new festival which brings together big ideas and great music, today announces some of the artists and speakers set to take the stage at the stunning grounds of Kirtlington Park in Oxfordshire from 12-14 June.

Curated to give parity to music and breakthrough ideas, this first-of-a-kind event is a unique programme of live performances and interactive conversations to satisfy the most curious, inquisitive and cultural minds.

Trailblazing powerhouse Grace Jones will lead the music programme, reinforcing her status as a true cultural icon, bringing her world-class, electrifying, funk-reggae artform to the stunning surroundings of Kirtlington Park. Joining her is multi-Grammy Award-winning megastar Gregory Porter, whose rich, vibrant voice and army of fans have rightly earned him title of King of Jazz, and gospel and R&B legend Mavis Staples, who has truly made a mark on history and through her music continues to inspire audiences around the world.

The Ideas Programme will feed the public’s increasing appetite for knowledge, debate and discussion, with speakers such as former foreign secretary David Miliband, Comic Relief Founder, Project Everyone and King of British Romcom Richard Curtis OBE, one of the country’s most popular columnists Marina Hyde and esteemed children’s author Sir Philip Pullman hosting a series of in-depth ThinkIn conversations. At KITE everyone is encouraged to get involved and have their say in the ThinkIn Village, helping shape conversations around the climate emergency; technology and surveillance; the political system; the future of health; culture and the arts; gender and sexuality and more. 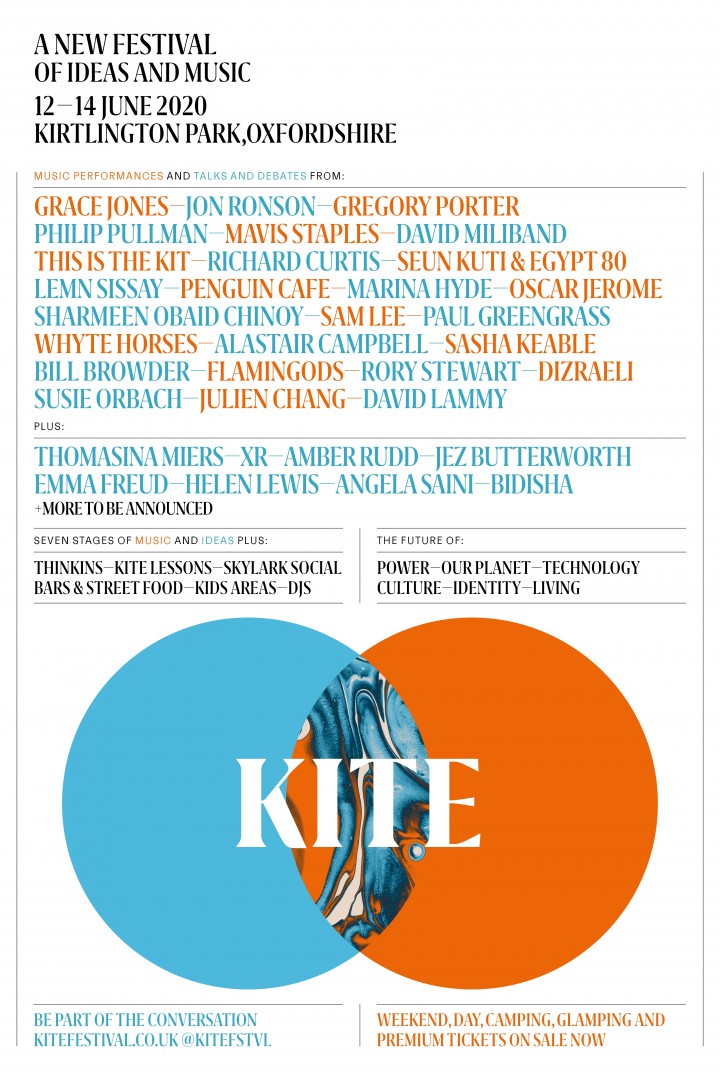 Alternative folk singer-songwriter Kate Stables AKA This is the Kit will captivate audiences with her beautiful harmonies and instrumentals. Author, screenwriter and film maker Jon Ronson (The Men Who Stare At Goats, Okja, So You’ve Been Publicly Shamed) will discuss culture and identity, film maker and women’s activist Sharmeen Obaid-Chinoy (Pakistan’s Taliban Generation, Saving Face) whose accolades include two Academy Awards and six Emmy Awards will host a conversation around culture. Penguin Cafe will bring their truly unique and immersive sound experience to the festival and broadcaster, poet and playwright Lemn Sissay MBE will host a Thinkin conversation. Oscar Jerome will enthral audiences with his soulful vocals and jazzy arrangements whilst neo soul singer- songwriter Sasha Keable will bring a refreshing moment to the festival with her honest lyrics.

Tony Blair’s former right-hand man and journalist Alistair Campbell will speak on mental health following the release of his book Better To Live: How I Learnt To Survive Depression and Seun Kuti & Egypt 80 will deliver a masterclass in Afrobeat.

For more about the festival, please visit their website