“I ended up splitting the gin into six different flavour groups in my head, and I used my background in botany to think of every plant that would work strongly in those six groups”

At OX Magazine, like most halfway-rational human beings with at least the faintest semblance of taste, we love gin. It most likely won’t come as any news to you, as a discerning reader of Oxfordshire’s finest lifestyle magazine, that the last decade has seen an unprecedented explosion of artisanal gin distilleries, popping up all over the country and producing spectacular botanical elixirs. So, welcome to ‘Mother’s Ruin’, our monthly feature celebrating one particular gin operation which we think deserves greater attention. This month, Jack Rayner spoke to Barney Wilczak of East Gloucestershire’s own Capreolus Distillery, makers of Garden Swift gin.

How and why did you set up a distillery?

I had spent many years as a photojournalist, specialising in conservation stories. I traveled all over the world with lots of botanists. I’d just done a story in China and realised that I’d missed all the spring flowers, which is what I love about living in the UK, and decided to spend more time with my partner, watching my garden grow. I’ve spent many years fruit distilling and making eaux de vie, which almost no one else does in this country, really. When we established our pure fruit distillery, we decided to make a gin as well – one that captures the same kind of complexity as the fruit brandies.

How did you develop the recipe for your gin?

Most people, when they make a gin, take an existing recipe and modify it in some way. When you’re making eaux de vie, it’s all about balance and complexity, so I wanted to produce something from scratch that had that same balance and excitement that I could nose for half an hour. I ended up splitting the gin into six different flavour groups in my head, and I used my background in botany to think of every plant that would work strongly in those six groups. We distilled about 150 different things, then spent four and a half months tasting them, taking notes, and starting to blend them together until we’d got it down to 34 botanicals – which we grow a lot of at home. Some things, of course, we buy in – rather than use dried orange peel, which loses so much floral complexity, we work with an organic cooperative in Sicily to import a special kind of blood orange. We process them by hand and freeze them to maintain that complexity. Last winter we did 2,600 kilos, and we have three chest freezers full of peel now. It’s a ridiculous way of working. 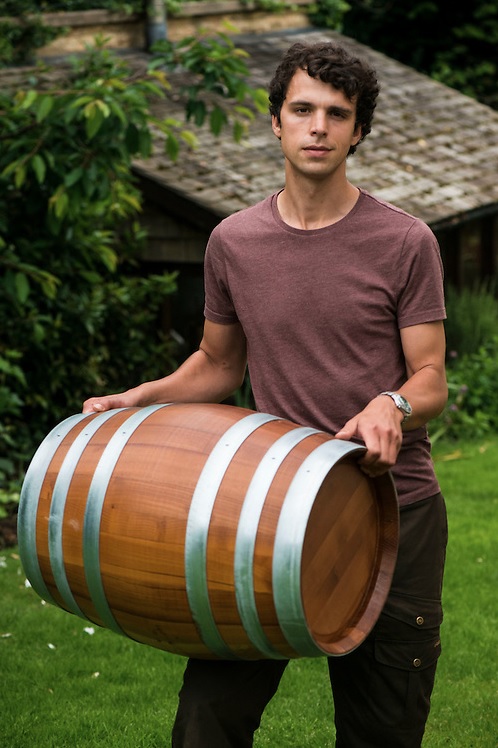 Tell me about the distilling process itself.

We have our 34 botanicals, which are roughly split in number. A lot of the harder spices and berries extract better from soaking in alcohol, and we soak them for 40 hours in British wheat spirit. We also have a basket in the still, which we fill with a huge amount of blood orange and lemon zest. Above that we have a sack filled with flowers, leaves and herbs, so we have this combination of maceration and vapour extraction. Most people don’t mix these two techniques because the balance is almost impossible to achieve, but it’s the best way of extracting the essence from every botanical, and I’m not very good at compromising.

How did you come to the decision on what to include in the gin?

We went through hundreds of iterations, slowly building up layers of flavour from the six flavour groups I decided on. Many of these botanicals share similar chemical compounds; for example, juniper has high notes of peppermint – to my palate – so we stretched that high end by adding more peppermint. We slowly built up these layers of flavour by blending them together, until we had the recipe to how we wanted it to taste.

How would you recommend serving Garden Swift gin?

It’s certainly complex enough to be drunk neat as an aperitif, but it also works very well with a neutral tonic – it’s a fully balanced spirit, so you don’t need any other major flavours. Tonic brings up more resinous notes, so a slice of orange can add a little sweetness to that. We also have our own recipe, the Chamois, which comprises a shot of Garden Swift, a shot of Genepi, which is an Alpine wormwood-based liqueur, and four parts apple juice – we press and pasteurise our own apple juice every year, so we always have plenty on supply. Very soft and very herbal.

The Seven Tuns is a beautifully restored 17th Century Inn, nestled in the idyllic village of Chedworth in the heart of the Cotswolds. Owners Simon Willson-White and Thomas Conway have created

The Greyhound Inn is a proper village pub which serves delicious food and drink and offers characterful ensuite bedrooms. In the heart of a pretty downland village by the North Wessex Downs near

In the past 12 months, pubs and restaurants have had to adapt to survive. One local catering company, Cirencester-based Relish, typifies this more than most.

Nestled in the sleepy village of Letcombe Regis and dating back to the 18th century, this attractive looking gastropub is a popular and thriving concern. In the vicinity of the Uffington White Horse, the ambience here is relaxed and vibrant proving particularly welcoming on a chilly autumnal evening.