Out From Under the Pile

“Nobody wants to be average these days,” says Eleanor Conway. “We either want to be amazing or shit. Even when we’re shit, we’re like, ‘Everyone thinks I’m shit.’ That’s still high ego, isn’t it? That’s still thinking everyone’s looking at you. It’s weird, a bit of a headfuck.”

At the time of talking, the stand-up is in Australia, where it’s nearly midnight. Her quiet voice becomes more audible as she moves away from those sleeping near. The self-described “comedic love child of Amy Schumer and Russell Brand” is down under (where she’s enjoyed 40 degree heat) for Adelaide Fringe. Do Australians talk to her about the state of Britain? “Not really. They don’t care.”

She’s performing Walk of Shame 2, which earned her an award at Perth’s Fringe World Festival earlier this year, and is now touring the UK. It’s “Breaking Bad meets Sex and the City” and a sequel to her Walk of Shame show, which wasn’t enough to cover all her shame – “I’ve got loads of it.” In June she’ll be five years sober. The show is about how while she’s “been asleep under a pile of coats” for 20 years, the rest of the world has been carrying on. “This is me waking up. It’s a coming of age show, two decades too late, about establishing boundaries and living life in real-time now that I don’t get to blackout – I don’t have my superpower anymore.”

I ask how grim things got when she was drinking and taking drugs. “I don’t really like answering that question.” We get into contest territory then, she explains. “It’s like, ‘Did you try heroin?’ Well, no, I didn't try heroin. ‘Well, it can’t have been that bad.’ You know what I mean?” She says it should come down to what’s excessive for each person. “It’s all about the desire to stop. If you think ‘I’m drinking too much’ then you’re probably drinking too much.” She speaks of an attitude that looks down somewhat on someone who only drank two bottles of wine a night in their debauched days, whereas others could manage five. “What do you want me to do? Go back out and drink five, or seven, or do a bit of crystal meth? Do I have to go back out and do that to qualify for the extreme Grange Hill ‘Just Say No’ idea of what an addict is?”

Even when she got sober, she allowed alcohol in her vicinity. The first week saw her spend four days at Glastonbury, where those she was with were “really heavily on it”. For the first year or two of sobriety, she also lived “in a bit of a party house”. She wasn’t going to get through it by just sitting watching reality television, she tells me. She needed alcohol to remain part of her life, to be comfortable having drink in close proximity. She doesn’t advise it for others wanting to get dry, but “that’s just where I was. I don’t fear alcohol or substances when they’re around me, it doesn’t really faze me at all, and I feel fortunate to have that as part of my recovery story.” 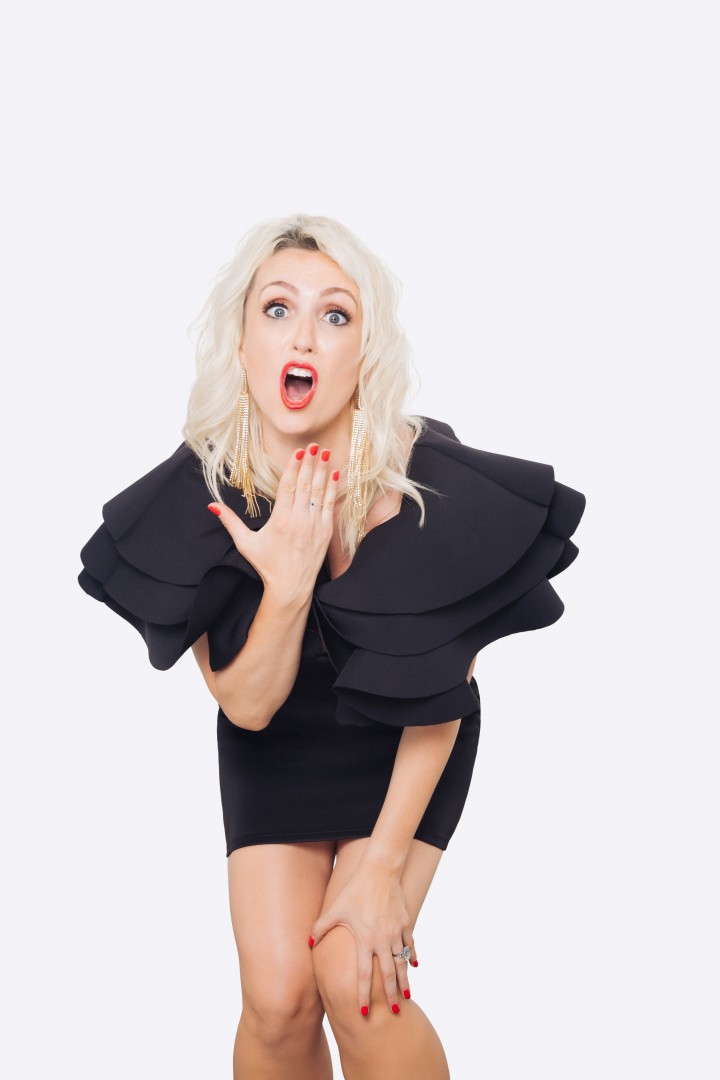 She’s in a craft where certain individuals might be tempted to have a little livener before performing, to boost their confidence. This isn’t an issue for her; she’s got enough confidence as it is. “You don’t want to see me when I’m drunk and on drugs; you look at me when I’m wasted and go, ‘That girl has got too much confidence.’ So I don’t really worry about it.”

What about after gigs though? Great shows can leave comics, actors and musicians on a high they might try and stay on via narcotics or booze. But her “benders end up with something horrific happening – I sleep with someone I shouldn’t, I wake up in hospital or covered in vomit.” A session might feel like a good time, she says, but they’re limited. “You’re just going to go to some stranger’s house, pretend you’re going to be friends with a woman in the toilets you’re never going to see again, start a business with a stranger in the smoking area. Nothing new ever happens and nothing real ever happens. So, anything that isn’t an utter bender is a good thing.”

Before sobriety her mental state was unhealthy. “Drinking excessively to solve problems isn’t a good idea. You’ve got to learn to sit in the pain of solving a problem,” she says, as opposed to attempting to fix things with wine or cocaine. “I know how to deal with painful stuff now. Before I’d be like, ‘I know what will help me stop feeling: sex with a stranger. I’ll just drink more, so I don’t have to think anything. And then the hangover will stop me thinking, then I’ll wake up at some point, and I’ll have forgotten.’”

There are many stories from the inebriated years, though, that she’s able to laugh at now. Walk of Shame 2 “is just all the ex-party girl stories”. She once drank so much she climbed to the top of one of Trafalgar Square’s lions. It didn’t end well. “I woke up in hospital; I couldn’t walk for three months.” She doesn’t feel bad about such occurrences now, because she’s no longer in that place. Instead she’s serving as “a warning to young millennial women. I’m a folklore; this is what happens if you’re not careful – in 20 years, this is where you end up, mate.”

Touring “a feminist show with award-winning dick jokes”? It could be worse. In the very least, it’s above average.