“I’ve had beer thrown over me, cocks and tits waved in my face. A lady once disintegrated into tears – in fact I’ve had tears a few times – but a lot of laughter too.”

Anyone who’s spent a lot of time out and about in Oxford will recognise a few regular faces; the sorts of people that you don’t know, but you sort of do at the same time. One artist who it would be smart to bet on being half way up Cornmarket is Squashua. He’s as much a chronicler of Oxford’s characters as he is a character in his own right – an Oxonian Norman Cornish, if you will. His bread and butter is caricature and in many ways, the visual bending and perspective warping of the form bleeds into his other work in which he casts a novel, almost psychedelic eye over some of Oxford’s most familiar sights. Here he is in conversation with Toby Hambly.

Can you remember when you first got into drawing/painting? Do you come from an artistic family?

Not really, but they were academic, so I was lucky to be surrounded by loads of books. I remember colouring in playgroup, and being told I was doing well to stay in the lines.

Did you have any teachers or mentors along the way that encouraged/nurtured your talent?

Definitely! I am really grateful to a few outstanding individuals. I can’t remember her name, but I had a delightfully kooky French art teacher in middle school. She was probably fired eventually. She was literally crazy. I remember I used a ruler to draw something and she snatched it from me angrily… she really didn’t like rulers. That stayed with me.

You’re also musical – do you find the two creative outlets complement each other?

They do – things like harmony and composition, dynamics and flow, contrast and lines – apply equally to both and beyond. I feel like the way our mind labels things often takes away a chance at a deeper seeing and practice. When it’s reduced to the bare essentials, all things are just different ways of practising this moment. The sensitivity of response we have is related to how free we are from the mind’s labels and overlay. I often notice the reason people struggle to learn is that their minds are too judgemental. So one of the deepest joys of learning to draw or any other art form is to escape just that part of our minds; I guess I see any art form as a path that, if followed with enough discipline and passion, will lead to the same point.

When it comes to caricatures – I find the art form really fascinating for a whole load of reasons. What drew you to it in the first place?

In the beginning, it was mostly a way to explore the world and a pretext to talk to strangers. And of course make a few quid. But I think it’s also fascinating just for its difficulty – it took me ten years of practice before I started feeling happy with the result. It’s endlessly fun practising to visually warp what you’re seeing. Another thing I love is how ‘lowbrow’ certain forms of art are – comics, caricatures, cartoons – when actually the talent it takes is a bit more than to put a shark in formaldehyde! Caricature is a wonderful pretext for an artist to make a few quid on the way, while practising their drawing and absorbing a wide range of viewpoints. 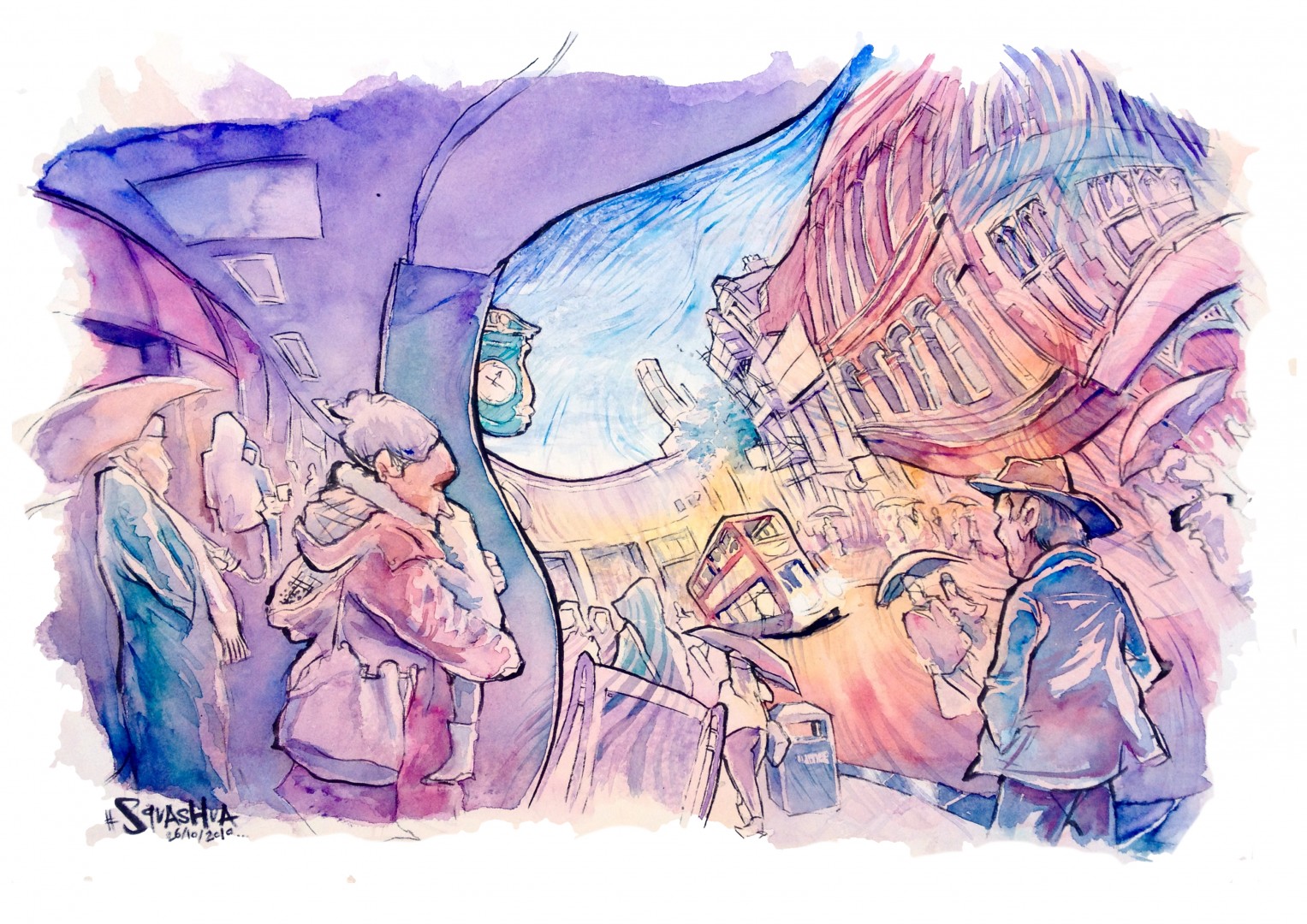 One thing that’s unique to caricature is the slightly comedic interplay between the image and the subject – what kinds of reactions do you get when people see the finished product?

I’ve had beer thrown over me, cocks and tits waved in my face. A lady once disintegrated into tears – in fact I’ve had tears a few times – but a lot of laughter too. Hugh Grant said, “Oh f*ck, that’s me!” rather endearingly. Just to shoehorn that in there…

You spend a lot of time drawing and painting out and about in Oxford. Do you find this gives you a unique perspective on the city?

There’s no better way to experience a place than to sit and draw it for four hours. You meet the regulars and see the little street dramas unfold. The other day, a woman ripped the clothes off her boyfriend’s back in front of me. Sadly, I missed the opportunity to draw it! Little details are just so absorbing – returning to spots I've drawn feels nostalgic.

How does that perspective influence your work?

Funnily, not really that much; I’m fascinated with drawing, and it’s a rather austere and pure discipline, for me at least. Subject matter is less important to me than the forms and lines themselves. There’s an escape to be found in just stepping back from anything specific to observe that it’s all just lines and tone and colour. So it doesn't really make a difference where I am.

The wavey paintings (if I can call them that?) have this sense of being done both really quickly and over a long time. The moments you capture seem fleeting, but the perspective warping must take ages to get right? How does the process work for these?

Well they are drawn quite quickly, but it’s quite a big bit of paper so it does take a bit of time. At the moment my process is to use a waterproof brush pen, then watercolour it later. It’s a kind of meditation for me to sit and draw things – it’s quite natural by now. The waviness kind of comes from warping the guidelines I’m imagining and then drawing to that. There are some experiments with visual perception you can do that can show that perspective is actually curved – MC Escher often used it, but then he actually knew what he was doing mathematically! 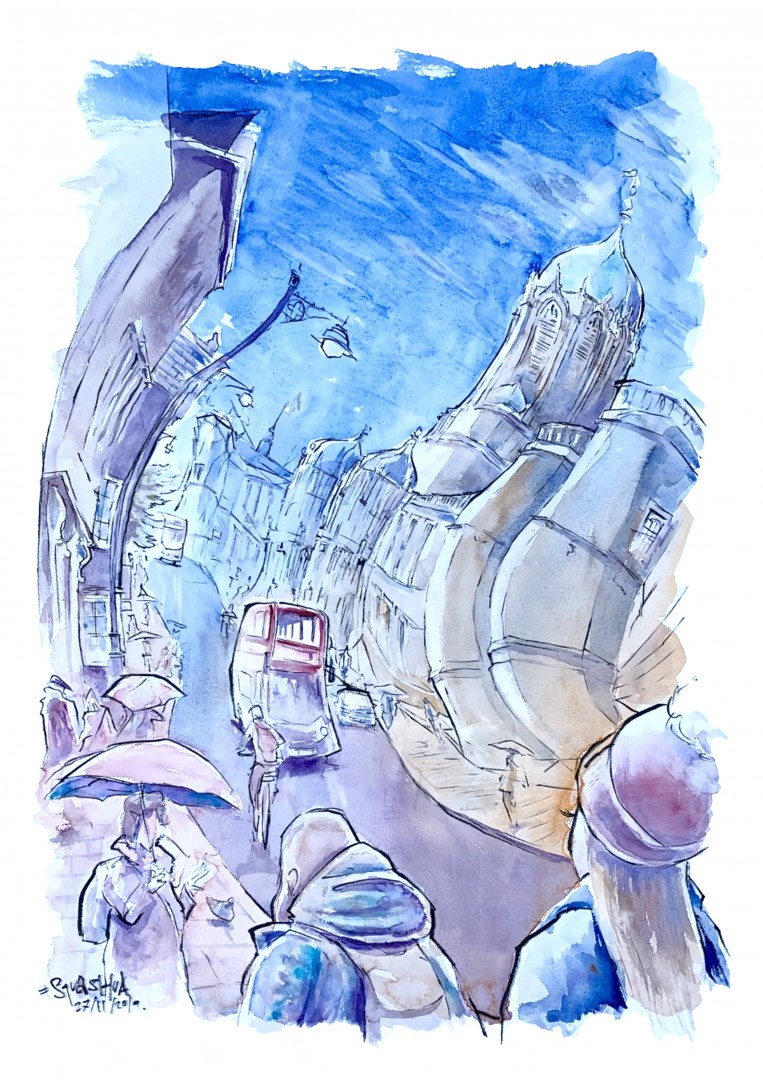 Also I always feel that behind the visual warping there’s a sort of perspective shift that you’re trying to get across – a new way to look at Oxford perhaps? Do you think there’s a gulf between the perception of Oxford and the reality?

Well, that's an interesting question. I see my paintings as more akin to the way a dancer would re-watch their performance. So I’m not really trying to get anything across to the viewer, in the dance of drawing there’s not much room left to think about meaning and concept. But in regards to the question you ask, I’d have to answer, what is reality beyond our perception? Oxford is a microcosm, and a container, and much of its nature is replicated in similar cities around the world. But then it does stand apart as a symbol of intelligence and learning, which throws into sharp relief the dire inequality we have here.

If so, what can we do to address that gulf?

Corbyn’s a start! And the musicians and artists in this city will take care of the problems eventually. As the council and university stagnate, Oxford will transform into a hive of artistic and musical talent, and buildings like the Radcliffe and the Bridge of Sighs will be kitted out with huge speakers, for raves. All the upper-class elitist assholes will be driven out like rats by the sound of some seriously heavy Desta*Nation basslines.

I saw recently that you’re deliberately keeping the prices of your work at a really affordable level – could you expand on why that’s an important idea for you?

Ah, well I’ve spent a good deal of my life penniless, and I’d like to rubbish the idea that good art costs money. So many talented friends are unrecognised, and so much dire waste gets promoted, that based on experience it’s usually the complete opposite.

You can see Squashua's work exhibited at The Jam Factory from 21 Februay-20 April. Find him on Facebook and Instagram for commissions.