A poignant reflection on timeless themes

As the Creation Theatre motto goes, ‘easy is evil’, which was most certainly demonstrated in their choice of Dickens’ Bleak House. The performance began with an acknowledgement of the size of the book, met with the question, ‘Whose idea was this?’ Despite the length of the story, the adaptation captivated the audience, maintaining energy right until the end.

The length of the novel, however, demanded the actors adopt an initial fast pace, therefore if going into the theatre without knowing the plot, the performance might have been difficult to follow. This was perhaps further exacerbated by the minimalist set and the multiple roles required of each actor. On the other hand, the fast pace of the play also added to the energy, keeping it engaging while setting the scene.

The cast played into the small stage – set amongst the bookshelves of the Norrington Room – embracing its casual nature and transforming it into what seemed like an infinite space. The stage was furnished with boxes, papers and stepladders, all of which were resourcefully used to depict the various scenes which we came across. 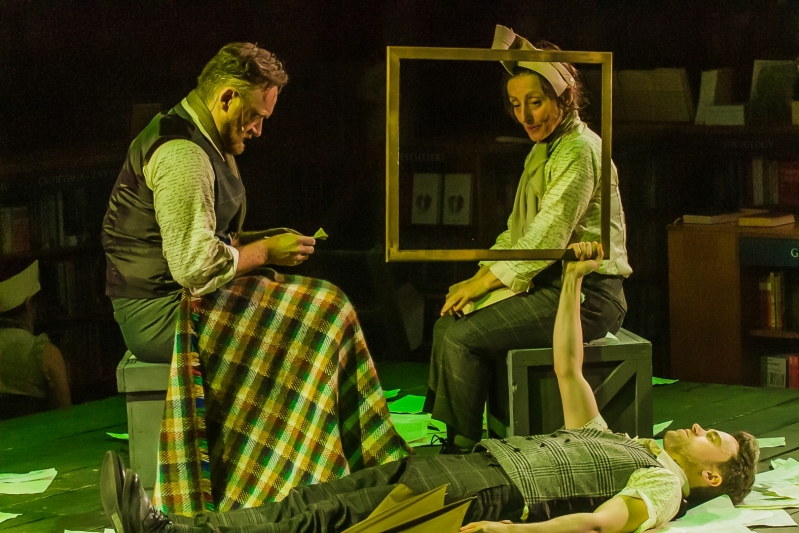 Set even before Dickensian times, Bleak House had some modern-day relevancies which the cast magnified in their performances. The story revolves around the Jarndyce and Jarndyce court case which could be seen to resonate with the UK’s current situation with Brexit. A quote from the novel reads, ‘Jarndyce and Jarndyce drones on. This scarecrow of a suit has, in course of time, become so complicated that no man alive knows what it means.’ The bleak and seemingly endless nature of both situations brings the story into today while remaining true to Dickens. The saviour complex which we saw in the work provided by Mrs Pardiggle, is a phenomenon which has become particularly prevalent in the modern world. The comical way in which Mrs Pardiggle was portrayed by Bart Lambert was an adaptation which intensified this parallel, further highlighting its applicability.

While the five actors were spread across 24 different characters, at no point was any part neglected. Not only was this level of versatility demonstrated by the cast, but the musical adaptation of the performance required constant shifting between roles. This was no test for the multi-instrumentalist cast who heightened the tone building an eerie and haunting atmosphere which again, felt to extend the space and create an immersive experience for the audience.

Creation Theatre’s brave and challenging adaptation of Charles Dicken’s Bleak House remained honest and true to the novel while playing on its parallels to modern times and giving the story new life. 167 years after its release, themes of obsession, vanity and identity remain just as important and were poignantly reflected in this performance.