“An entertaining evening complete with crass and cruel characters”

Following their staging of The Effect earlier this year, Ronin Theatre Productions return with Sam Holcroft’s Rules for Living. Like Lucy Prebble’s antidepressant drug trial play, it’s not devoid of pill taking, but the setting is somewhat more domestic than a clinic. It’s Christmas, and brothers Matthew (Ralph Watson) and Adam (Alistair Nunn) return to the family home where their mother Edith (Liz Hutchinson) is getting the turkey and trimmings ready. Also present are Matthew’s girlfriend Carrie (Laura O’Mahony) and Adam’s wife Sheena (Tracey Rimell). 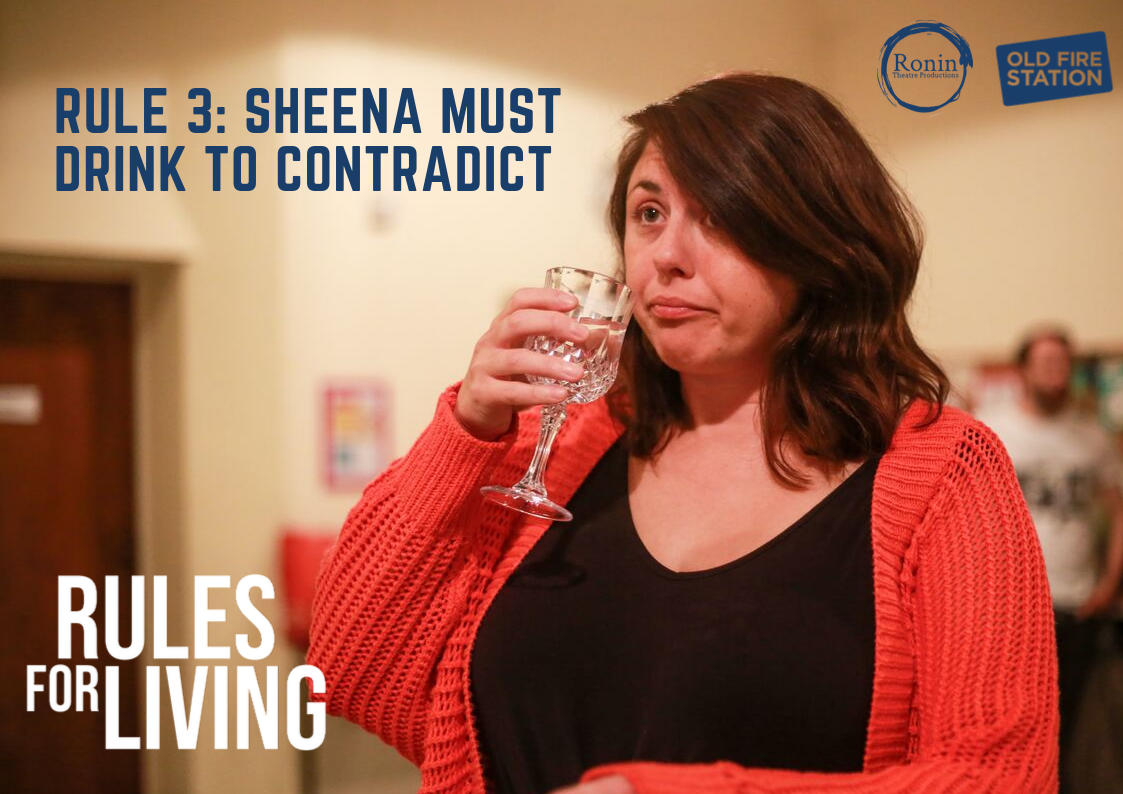 The family await the arrival of Tim Eyres’ Francis – Matthew and Adam’s dad, Edith’s husband – who later comes from the hospital, barely able to speak having not long had a stroke. In the lead-up to his entrance, there’s a distinct lack of festive cheer. The larger-than-life Carrie is concerned the family don’t like her (they don’t); Adam, with his marriage on the rocks, is no fan of the fact Matthew frequently speaks to Sheena on the phone; and Edith has a passive aggressive and rather bitchy way of seeing that everyone pulls their weight in getting the lunch ready.

We also learn of the rules the characters live their lives by, which – with a ding sound – light up in bright lettering on the backdrop. For example, ‘Matthew must sit and eat to tell a lie’. Some of these rules are more engaging and necessary than others. The fact Edith has to clean to keep calm fades into the background against Sheena having to drink before she can contradict, which sees the character get sufficiently sloshed for the carnage this gathering becomes. As Sheena, Tracey Rimell is a convincing drunk, her manic carving of the turkey (accompanied with words that possibly go some way to smashing this patriarchal society) one of the best-executed moments of the night.

Alistair Nunn’s Adam must affect an accent to mock, and his accents are rather good. They don’t get a lot of LOLs, but for me the rule aids in creating a character it’s difficult to like, which makes for a more interesting overall dynamic. Laura O’Mahony puts in a good shift as the inappropriate Carrie, and earns one of the biggest laughs when she clumsily greets the wheelchair-bound Francis with a holler of “don’t get up”.

There is another character we see just once at the start of the play, and then again shortly before its end. Emma is Adam and Sheena’s daughter, whose anxiety causes her to stay upstairs away from everybody else. Her parents have been looking into cognitive behavioural therapy, which informs the play’s title and the rules its characters follow. Though she only speaks for a little bit, Martha Ibbotson is most engaging as the young girl, during a scene in which she appears to be the happiest of everyone onstage.

While the cast could do with relaxing into things a bit more, Ronin’s return brings an entertaining evening complete with crass and cruel characters. Sometimes the rules get in the way of the good old-fashioned dinner party set-up, but in the main they’re a welcome layer to a winning formula.

Rules for Living is at the Old Fire Station, Oxford until 2 November.