“I’m going to let the white people, my allies, do the work for once. ”

Prior to interviewing Adam Lowe, I received an invite to a Facebook group called ‘Strictly Polari’, the members of which converse using this historic form of queer slang. All I know is ‘lallies’ means legs, so I declined. “It’s a tricky one,” says the UK LGBT History Month Poet Laureate, “because there isn’t a whole language’s worth of words for Polari.” There are only about 500 terms, he explains, which you can pepper into conversations. Five years ago, Lowe’s ‘Vada That’ was named poem of the week by Carol Rumens for The Guardian, and the collection he’s currently writing comprises at least three more Polari-based poems. People still use it, he says, albeit not the majority of the LGBTQIA+ community. “I don’t think it’s going to become a second language in Britain or anything like that, because it was very much about hiding who you were, and people are not as afraid now to be LGBT – a lot of people are quite comfortable being out and open. However, I think a different need for Polari has arisen; one of creating an historical context for us as a community.

“It’s a recognition that LGBT people are not a new phenomenon. We’re not something that appeared out of thin air when the Wolfenden report was published, when Stonewall happened, or in the 80s and 90s when a lot of our rights were fought. When people learn we have a language, it suggests a connection to something longer-lasting.”

And we still have queer slang, I point out. “Absolutely, and there are bits of slang now that are from Polari – bits of straight slang that are from Polari. I think there will always be a use for slang because it enmeshes people as a community. If you speak the lingo, it means you are part of that group. So, slang performs a really important role in connecting people.”

Just the beginning of a conversation that also covered drag, Myalgic encephalomyelitis (ME), and black history.

This time last year I interviewed performance poet Dean Atta, who spoke about experiencing dysphoria once following a drag show he did. “I don’t do drag at every performance,” he told me. “I have to build myself up to it and make sure I’m going to have people there with me, who will look after me if I don’t feel so good after.” You have your own drag persona, Beyonce Holes, can you relate to what Dean says?

I’ve known Dean for a long time and I think doing poetry in drag is relatively new for him. It might just be that I’ve been doing it for longer, but I’ve never really had that issue. I’ve always wanted to dress up, I always have dressed up – when I was a kid, I used to have a little box of dressing up things – so drag kind of feels like second nature. I have perhaps questioned at times, when I’ve been doing it a lot, where I am on the spectrum. I think I’m probably gender fluid. Sometimes I feel more feminine and sometimes I feel more masculine – it’s a sliding scale. Drag can make you reconsider where you are in terms of gender but I wouldn’t say I have dysphoria – that’s a very specific term and set of experiences. Actually, one of the reasons I don’t go around saying I’m trans, is that I don’t experience gender dysphoria and I know other people do. While I’m comfortable saying that I am gender fluid, there isn’t dysphoria within that; more a recognition that at various points in my life I have felt different – like my soul was feminine or female. I’ve been like that since I was a child – part of that is about being raised by women. 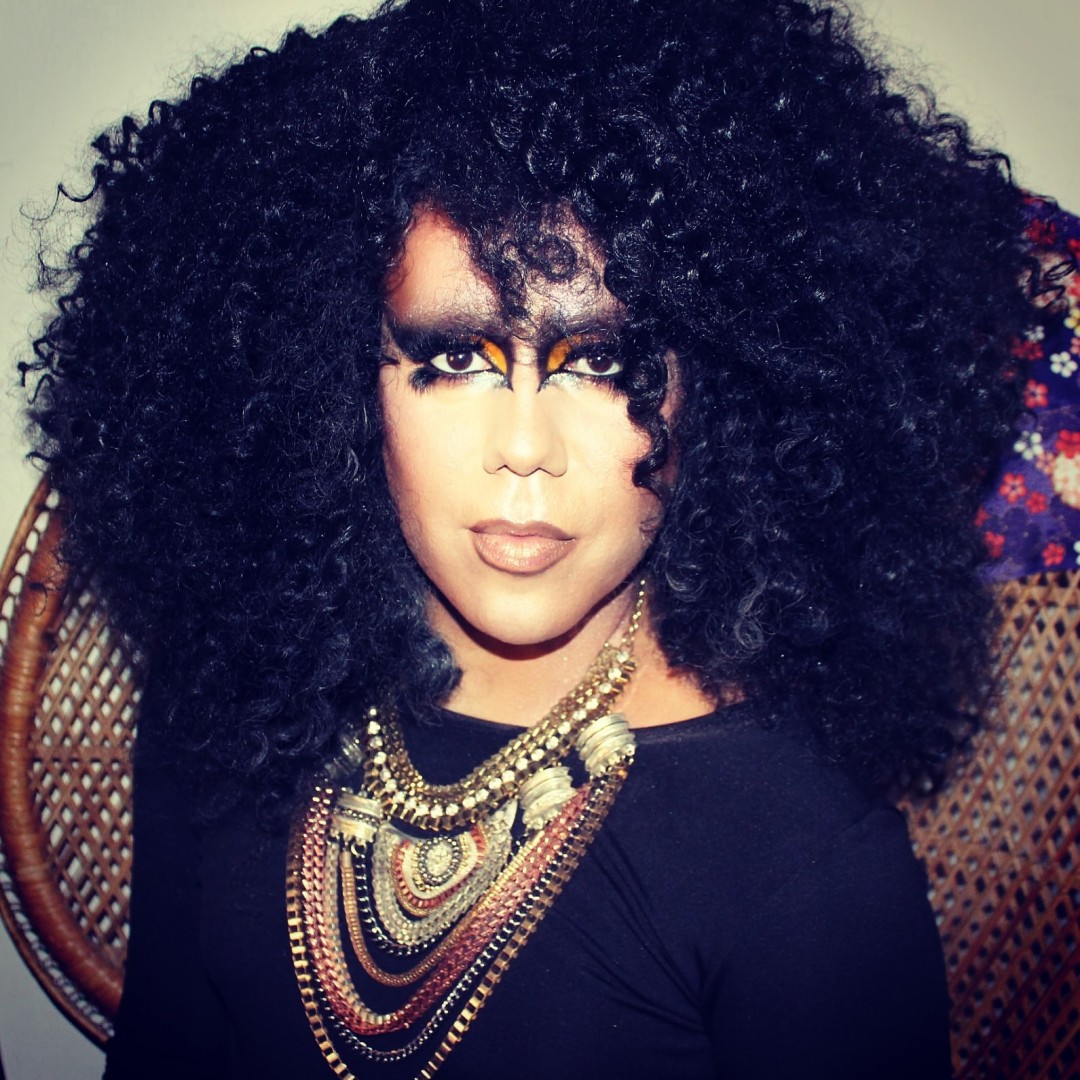 You recently took a two-year break from drag…

It was unintentional really but I had so many other things to focus on. I had health problems and was busy with work anyway. I have an energy limiting chronic illness, ME, and the key management technique is to pace yourself. It means alternating work with rest and making sure you’re really careful about your boundaries. I spent a lot of time relearning and re-establishing those boundaries. So, I’d kind of forgotten about drag but a friend was doing something for Manchester Pride 2020 and had asked performers to pitch stuff, so I did and they picked me. I did a number on Black Lives Matter; I chose ‘Sinnerman’ by Nina Simone, took some dialogue from the news and commentators in America, and made a performance from that. Afterwards, Manchester Museum were like, ‘we want you to do something for Pride too.’ I ended up doing a poem and lip-sync for them. They’ve got a Queer Tales segment they do every year where they invite drag queens to queer the space and respond to specific artefacts. I really enjoyed that, it’s had some really positive responses and it’s great we get spaces to do those things. Drag sometimes allows you to slip in quite political things when people are not expecting it. They’ll be in a nightclub and they’ll think, ‘oh, I’m just going to watch something camp, funny, mean and bitchy.’ Then they see something moving, emotional, serious or challenging. It makes them think in a way they haven’t before, it maybe takes them off-guard, and that beauty and spectacle allows you to do it in a way that is maybe non-threatening.

How is your health right now?

ME is a fluctuating condition so you have good days and you have bad days. I very rarely have great days, I’m not going to lie, most days I feel a little bit ill. But it’s something you just have to manage and it’s probably not going to change. They say about five percent of people completely recover. I know loads of people who have ME, I know very few people who have ever recovered, and quite often the people who have turned out to have another underlying condition for which there was a cure or treatment. For example, they might feel fatigued and sick to their bones but years later it turns out they have Coeliac disease – as soon as they cut that out, their symptoms resolve.

The black and mixed-race differently-abled experience is not something of which I see an overwhelming representation.

I had a conversation about this with someone recently. They said, ‘who are your heroes who are black and disabled, or mixed race and disabled, in the media?’ I was like, ‘well, there aren’t any really.’ The only person I could think of was Jennifer Brea, she founded #MEAction and has made a documentary about ME called Unrest. She’s not a household name by any shot, only well known in the community, so there aren’t lots of spokespeople for black and disabled people – there probably aren’t a lot of role models that are disabled either. People often overlook ableism when they’re thinking about diversity. People look for more obvious things – ‘let’s get some LGBT people on’, ‘let’s get some BAME people on’ – but they don’t necessarily think about disability. Some people are waking up to it but it’s a bit late. I’m hoping people don’t just look at one thing at a time because that creates problems. If you think, ‘alright, we’re just going talk about black people now and we’re just going to do LGBT stuff tomorrow’ – actually, there are black LGBT disabled people, a wide range of people who intersect across different identities, and it’s important we embed that within everything we do. I’m on the management committee of Schools OUT UK – the charity that founded LGBT+ History Month – and they have a website called The Classroom where they produce lesson plans and resources for teachers. One thing they’ve always told me is that they don’t just usualise LGBT lives (they say usualise instead of normalise because normalise implies there is a normal and an abnormal) but the full spectrum of characteristics.

This year, have you been encouraged by efforts to teach and learn black history?

The first time Black Lives Matter came around, I remember so many of my friends just did not get the point and were saying things like, ‘don’t all lives matter?’ That was a conversation I had with people who were otherwise very clued up on discrimination because they just didn’t get it. This year, that has changed. I’ve noticed people stepping forward and saying, ‘I’m willing to learn more about this.’ That hopefully will lead to greater acceptance and understanding of each other. To be honest, I didn’t engage in lots of BLM stuff this time because I did so much of it last time and I was so exhausted by constantly having to explain why stuff was racist to white people. I just thought, ‘I’m going to let the white people, my allies, do the work for once. They can explain it because it’s probably not as traumatising for them.’ It’s really difficult to explain it in a detached, dispassionate way when you are affected by it. Essentially, a lot of it is, ‘I don’t believe you when you say this is racist, I don’t believe your experiences were racist, you’ve now got to defend yourself to me, a white person, who doesn’t believe in what you’re saying.’ Sometimes it feels like you’re in an abusive relationship with the white community (and the white LGBT scene) and they’re gaslighting you at every stage about these things. So, this year it’s been really positive to find that so many people are saying, ‘I’m going to go and challenge this myself’ and it’s not had to fall on the people of colour as much. It is much better now that we’ve got allies advocating for the same things we are.