“ I am a wannabe rock star, but instead of musical talent I happen to be good at maths ”

Bat Out Of Hell

“As a student,” Tom Crawford recalls, “any opportunity to do fancy dress usually involved me not wearing clothes.” Appearing semi-nude doesn’t faze him, he says as we sit (fully clothed) outside his Norham Gardens home, so teaching maths in his pants comes quite naturally. 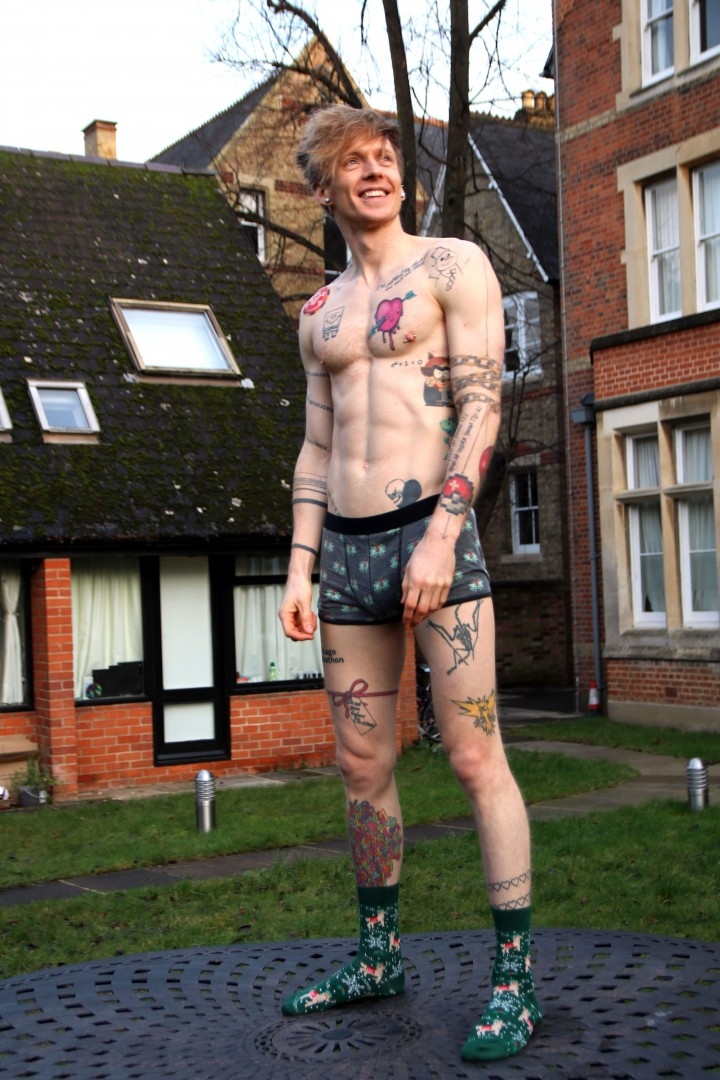 He does so for his Tom Rocks Maths ‘Equations Stripped’ YouTube series, for which the St Edmund Hall tutor removes an item of clothing each time he sheds a layer from an equation. The idea came about when he was working as a journalist for the Naked Scientists, a University of Cambridge (where he did his PhD) initiative involving “stripping science back to the basics, similar to Jamie Oliver’s Naked Chef”. Believing they should have “more fun” with the title, he’d pepper the BBC radio show’s scripts with “jokes, puns, or innuendoes hinting we were all naked when, in actual fact, we weren’t”. He was somewhat in the minority though, and in this particular case, the naked thing didn’t develop further, “but I think that put the idea in my head.”

When he decided to do his own videos, he considered what was already out there: there was comedian Matt Parker’s Stand-up Maths; 3Blue1Brown which uses a visuals-first approach; and “the pinnacle of maths”, Numberphile. Looking to do something “a bit different”, he spoke to non-mathematicians who saw the subject as “very serious”. The Naked Mathematician is his way of overcoming this. “If I’m literally teaching you maths in my pants, you might not enjoy it, you might think it’s weird, but at least you won’t think it’s serious anymore.” It challenges the “old dude in a tweed jacket vibe” some might associate with maths tutors, though I sense a video of him in nothing but Pokémon boxers and a tweed jacket would be well-received. “I bought one from a charity shop a few years ago,” he tells me, “I’ve yet to wear it.” His attire, or lack thereof, obviously depends on the audience. “I do talks in schools and sometimes the teachers, bless them, send a very nice letter saying ‘we don’t think we’d ever have to ask this question, but we just want to check...’ For such talks he is of course completely dressed, as he is in his YouTube videos tackling GCSE maths. The ‘Equations Stripped’ uploads are university level – he also toured UK universities a couple of years ago as the Naked Mathematician, giving roughly 30 talks in just six weeks. 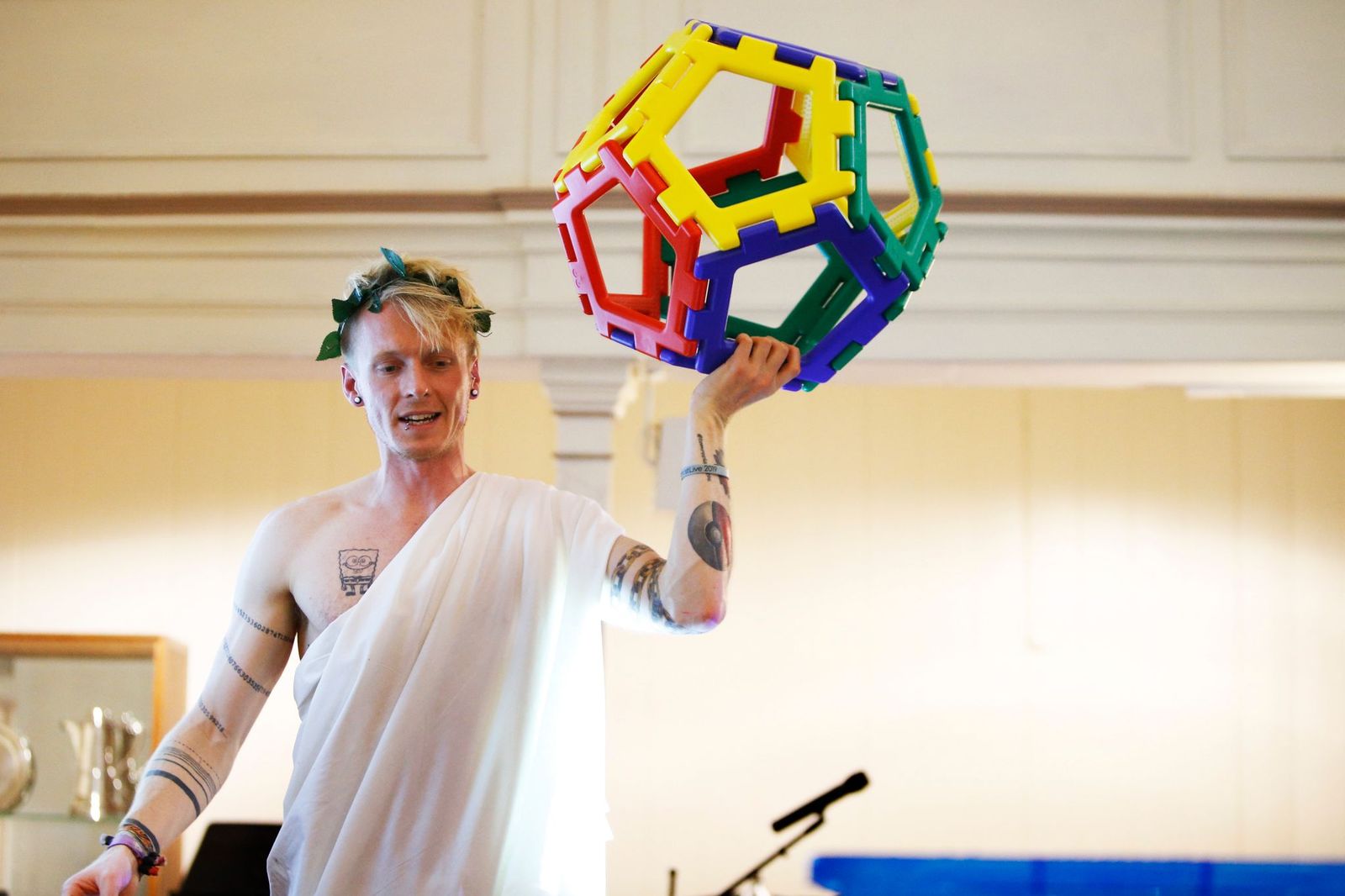 Creating online maths content takes up 28 weeks of his year. In addition, he teaches undergraduates for 24 weeks – three eight-week terms. With us speaking in June this year, I ask how his students have coped the past 15 months. “Overall, the majority of students have managed, given how tricky it’s been, but certain individuals have certainly struggled more than others.” They’ve been affected by lack of structure, he says, explaining a first year’s “rigid” timetable under normal circumstances: lectures Monday-Friday, 9-11am. “It’s annoying because you have to get up every morning and go to your lecture,” he says, “but you know every morning you’re going to sit through two hours of lectures.” With the afternoon then spent working on assignments or the like, “you have a structure to your day.” Owing to Covid, lectures were pre-recorded for online, suitable for people like him who don’t like mornings, who could rise when they wanted and then get learning. But some first years, he says, intend on watching lectures but panic and prioritise a pressing deadline instead, “then they’re tired after doing that so don’t watch the lectures that day. When it comes to their next deadline, they’ve got six hours of lectures to catch up on. They try and watch all six hours in one go, which just doesn’t work, and then it goes like a spiral.” New students have gone from structured schooldays to something rather different. “Having fixed lectures is a nice way of transitioning between school and university, and a few of the first years have really struggled without that.” Further, he’s found virtual teaching tougher, and whenever in-person sessions have been allowed, all his students have chosen them over online. “They prefer it, I prefer it, I find it easier to read their body language; whether or not they’re understanding.” He might be able to see them on a screen – with him they need “a very, very valid reason” to switch off their camera – but gleaning non-verbal feedback is trickier, “especially if you have a dodgy connection”. All that said, at least the University didn’t have to stop all teaching. “We’ve still been able to teach, something is happening, I just don’t think it’s anywhere near as good as the in-person experience.”

He has been able to use his platform to explain Coronavirus, following reference – “in the news, I think” – to the mathematical modelling used to predict the virus’ spread. “They were mentioning these models but lots of people were responding like, ‘well, what are they? How do they work? It’s all good and well policy being dictated by science, but we don’t know what that science is.’” He teaches disease modelling to his second years as part of a mathematical biology course, and while nowhere near as complicated as the models being used for Covid, this encouraged a series of “relatively advanced” videos about the spread of disease. 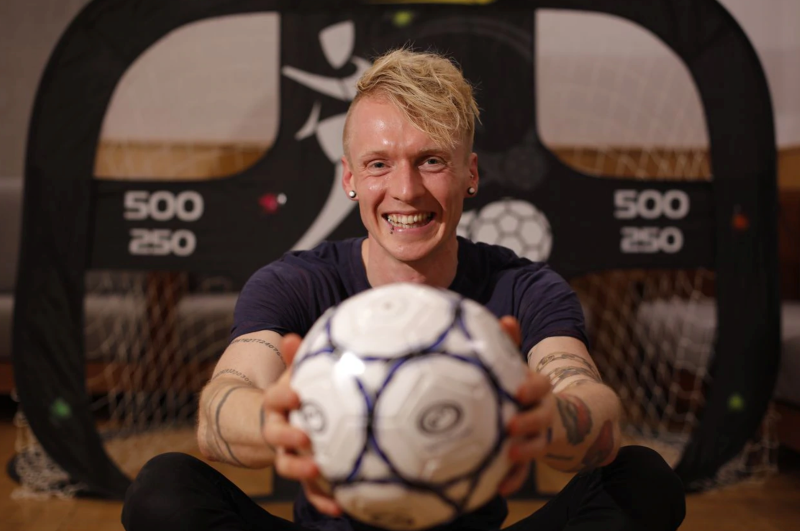 Talking of his platform, I interview him the week after he’s hit 50k subscribers. A video he’s made to mark the milestone shows viewers aren’t solely interested in what he’s teaching, but also in him. When his YouTube career began, he says, it was all about the maths. As it’s progressed, he’s added in more about his own personality. “You have to make that decision,” he says, “as someone on social media: how much of my life do I want to be public? But you have complete control over that, I’m in complete control of what I do and don’t post.” He’s happy, for example, to discuss his tattoos and the stories behind them, or a song he’s currently listening to. “I am a wannabe rock star,” he admits, “but instead of musical talent I happen to be good at maths. I started sharing a little bit about my music tastes with people, and then people were sharing songs with me, loads of new bands I’d never heard of from around the world.” As well as running his own channel, he’s done ten videos for Numberphile, which at time of writing has 3.76 million subscribers, “for a channel about maths,” he laughs, “and not even easy maths – nearly 4 million people subscribe to this channel, it’s insane.” Growing up he would watch Numberphile videos and now he presents them, which if he stops to think about, “feels wrong and weird”.

He’s possibly tired of people telling him they didn’t like maths at school, but I say it anyway. However, when I came to do a music theory exam, I grew very fond of the maths involved. “People need to learn maths in a way that makes sense to them,” he says. “In your case, maybe that’s through music.” He does a talk in schools about the maths of sport, where he takes football and addresses how to strike the perfect penalty, which “basically turns into a geometric problem” requiring Pythagoras’ Theorem and the solving of a quadratic equation. “It’s about placing what seem like abstract mathematical ideas in a context that makes sense to the students who can then see: ‘this is actually really useful and applicable to my life, the world, and everything around.’”

He also runs micro-internships through the University of Oxford, teaching students how to create online maths content. It could be a podcast, writing an article, or “the really ambitious project” of making a video. Through the course he’s met with an assortment of talent, including one student with a stand-up routine of “amazing” terrible maths jokes, and others who do magic – maths, he says, underpins most card tricks. He and his students began making use of these skills for online, say, tweeting a maths joke from time to time. This has now developed into a variety show for IF Oxford, the Science and Ideas Festival, comprising five or six short acts and Tom as its compère. “Maths is fundamentally a science,” he says, “and so fits science festivals.” The variety show, for which they’ve received funding from the London Mathematical Society, will mark his fourth appearance at IF Oxford.

For this year’s Festival he’ll also be hosting a panel show. One of his graduates, Kai Laddiman, was the youngest ever octochamp on Countdown, winning eight games in 2008 at the age of 11. A former colleague at St Hugh’s, James Martin, was an octochamp in 1997. “When I found this out, I said to them, ‘video idea: I’ll present Countdown, you two go head-to-head.’” Also featuring Bobby Seagull and Susan Okereke from the Maths Appeal podcast, Tom Rocks Maths’ Countdown remake proved “pretty popular and really good fun”. The planned Great Big Science and Maths Gameshow advances the idea, capturing “the best bits from various game shows” with support from the Institute of Mathematics and its Applications. So, inspired by Would I Lie to You? “someone’s going to read out a mathematical statement [like] ‘Pythagoras had 12 wives’ and everyone else has to figure out whether it’s true or false. We’re hopefully going to do it with a live audience and record the whole thing and broadcast it online as a watch-along as well. 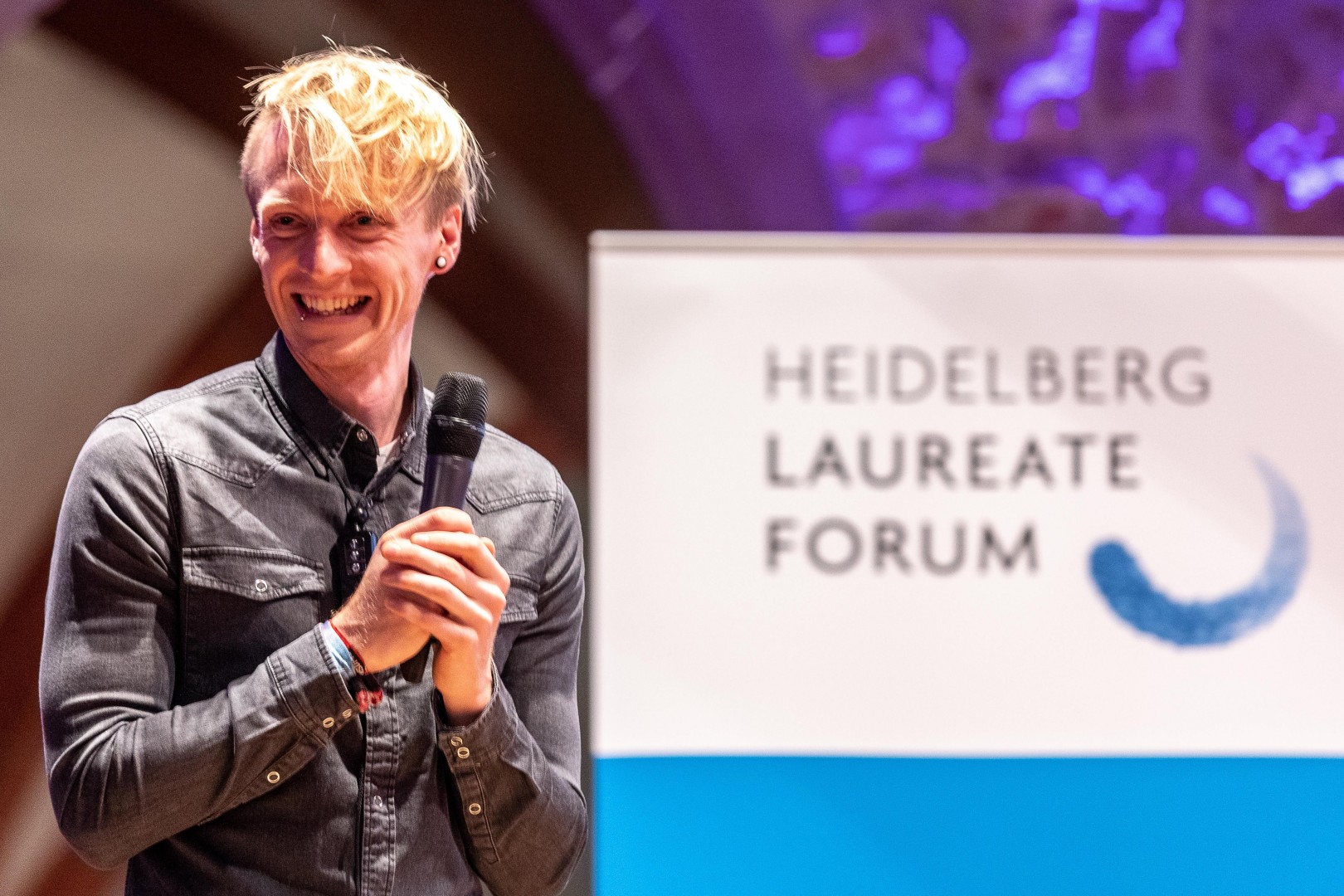 “I’m trying to make maths more approachable for people who think it’s not for them,” he says as we discuss the importance of IF Oxford, “and I think generally that’s what science festivals do. A non-scientist can go and hear from a world expert about their work – or watch what’s hopefully an entertaining maths variety show. Presenting science in a fun and engaging way. That’s what I do on social media. This is the very same thing, but in-person.”

I better let him get on with plotting it, while I go and read up on Pythagoras – the theorem, and then the nuptials.

It’s Not Talking if You’re Laughing

I recently tweeted that I’ve had the kind of year where if you read it in a book, you’d be like ‘Okay, that’s a bit far-fetched.’ and when it got to the stage where my sister’s therapist asked if I was okay, it felt like it might be time to do something about it.

Water safety advice is being issued by Oxfordshire County Council’s Fire and Rescue Service over concerns about the number of people getting into difficulty in the county’s waterways and lakes.