“This one had daunting speed – a matter of how fast you‘d dare to go into a bend, rather than any doubt of the car’s ability to match your courage.”

The Le Mans 24-hour race has to be one of the most exciting on the European racing calendar. The road drive from the UK in itself is an occasion to see some of the finest road cars in the world actually being driven. The camaraderie, the spectacle, the meeting of new friends and not least the racing are a prime motoring and racing enthusiast’s indulgence. It just doesn’t get better.

Oh, but it does. How about an invitation from Ferrari to drive not one, but a cavalcade of six brand new Ferraris to the race to support the team? When I found that two of those were to be the new 488 Pista and the 812 Superfast, I didn’t get much sleep for six months from the date the invitation arrived. I’ve been dead lucky to have both owned and driven many Ferraris and believe I know and understand the brand. Yet every enthusiast will appreciate that none of this takes away the excitement and anticipation of driving one you haven’t previously driven, never mind the availability of the keys for six of them.

As Ferrari are a professional bunch, a lot of prior consultation took place on the initial car allocation. I had the perfect personal drive menu – 488 Pista to Le Mans, testing the 812 at Le Mans, and driving the new Portofino back to the UK.

It was a sunny but damp morning when we picked up the cars from Ferrari HQ. As I loaded up the Pista with my bags I didn’t envy the guys from Top Gear, who were set to drive the 812 Superfast there in the wet – Not far off 800 bhp is a lot of responsibility in a car worth well over a quarter of a million.

For those who know nothing of the Pista it is their flagship 488 powered by the most powerful V8 engine in the brand’s history. The Pista (Italian word for ‘track’) has brought together all the race experience of the 488 Challenge Series and 488 GTE to bring us this ultimate Ferrari road car. 0-62 mph in 2.85 secs, a top speed of 211 mph, and 720 bhp. Prices kick off officially at £252,765. If you’re lucky enough to buy one it’ll probably cost you a whole lot more – ours fully spec’d was £290,781… and they’re rising.

Yet the Pista is anything but daunting. What I found remarkable was some 30 minutes later on a heavily speed camera’d stretch of the M25, the Pista was relaxed and easy to drive; we were just as impressed with its low speed refinement as we were much later on with its performance at high speed. The mark of a truly great car with this level of performance is how easy and enjoyable it is to drive at a steady 50 mph. 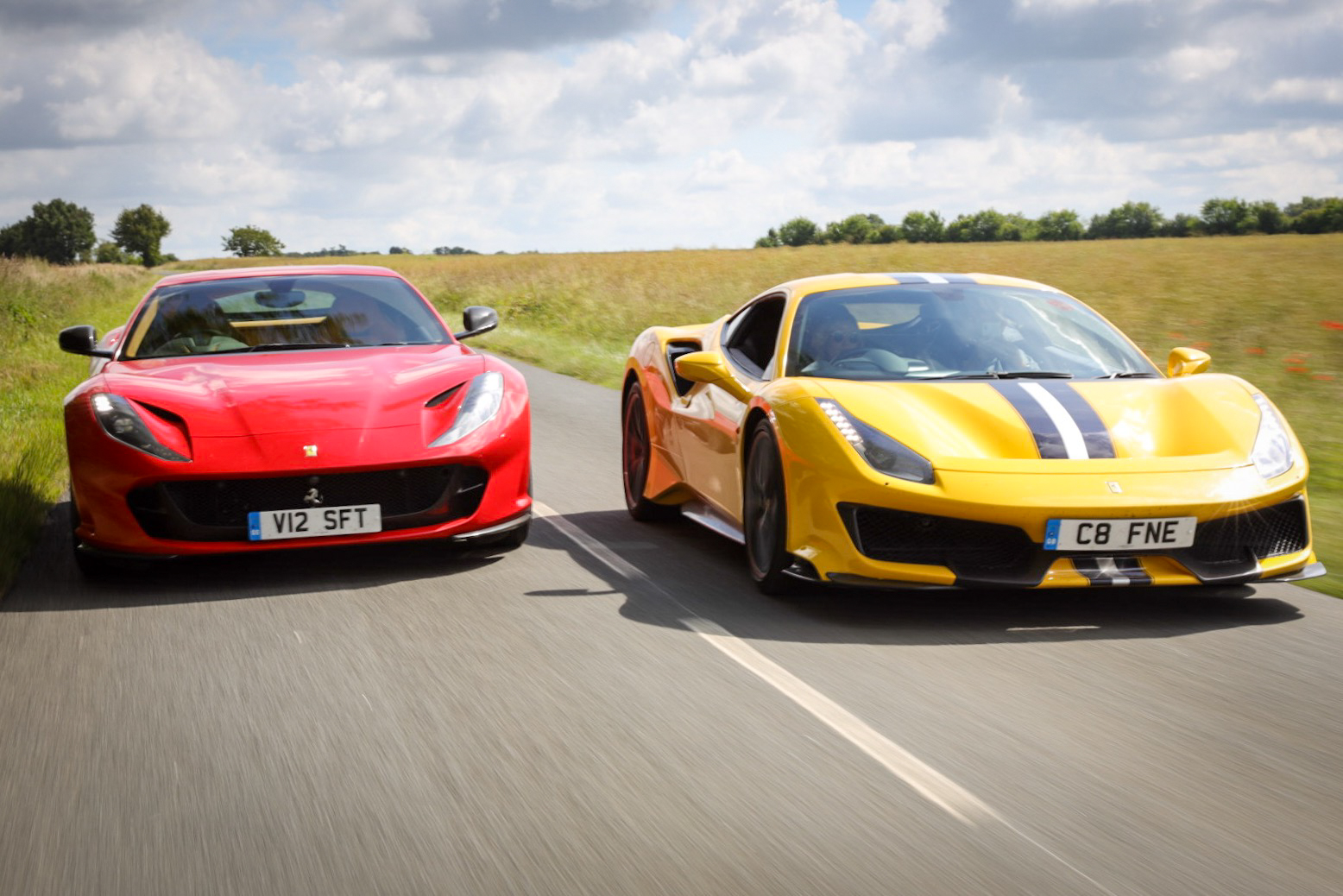 It was from this point, a long steady 70 mph motorway cruise that I reflected on the Pista’s contemporary breeding. Of course, it’s a Ferrari, and whilst the name is legend, it is legend for a reason. Let me put it another away, if you are not excited by the way a Ferrari delivers high speed performance under hard, fast, skilled driving, no car anywhere in the world will ever impress you.

The 488 Pista takes the Ferrari experience to new heights; the original 458 with the naturally aspirated V8 engine was the closest in my mind to the perfect Ferrari. The 458 Speciale proved Ferrari could make it even better. Then came the 488 with its now twin turbo charged 3.9 litre V8, smaller in displacement than its predecessor but generating higher power output and even better performance, succeeding in squashing the fears of the naturally aspirated camp (including me), and proving that a turbo can create even more and take away nothing from that naturally aspirated experience.

Driving the Pista to the wonderful Chateau Rivesarthe on the Noyen-sur-Sarthe proved to be 300 miles of remarkably comfortable and relaxed driving. But it was day two on the back roads of Le Mans with the Top Gear guys behind in the Superfast, that the Pista and I hit driving heaven. Up ahead was the photographer in the Portofino, the Pista sitting eagerly between the two at a steady 70-ish mph. Then came my chance, a clear winding road ahead, lots of vision, field either side… go for it.

With the Pista’s manettino to ‘race’ and ‘bumpy road’ setting for the anticipated uneven surfaces up ahead, it was full throttle in second for the Portofino overtake – just for fun but not even needed really; third, fourth, fifth, sixth would have achieved the same with consummate ease. As a quick mirror glance showed dust kicking up at the rear, the 812 and Portofino soon became specks in my rear view mirror.

Pista and I were doing that thing where car and driver feel bonded; its speed and sheer competence on another level to just about anything I have ever driven. You can drive the hell out of it, and so fine is the communication, from the seat-of-the-pants feel to the obedience and accuracy of pedal and steering, that your confidence increases the harder you push it. You have to pinch yourself however, because in no time you can be going maybe too fast, and that you must save for when you take it to a race track.

As I pull over to swap Pista for 812 I realised I had discovered a Ferrari that I would pay almost any amount of money for if I had it. Not only does it look beautiful, it sounds amazing too; in fact, if there were medals for exhaust notes, its designer would be knighted. Much as I couldn’t wait to drive the 812, I didn’t think anything could ever outperform the Pista.

I was wrong. The 812 is so overwhelmingly powerful and fast that I quickly decided to spend the next half an hour driving it very tamely until I was able to get a feel for its even Pista-beating acceleration and mid-range punch. This time the exhaust note was high pitched, screaming V12 style. Enzo Ferrari always claimed that the ultimate Ferrari is a powerful front engined V12. I can see why. The 812 to my mind would have been Mr Ferrari’s flagship Ferrari of today; it looks, sounds and performs like the ultimate supercar that it is.

The half an hour passed, and it was time to dig deep. 6.5 litre V12, 0-62 mph in 2.8 secs and a top speed in excess of 211 mph. The aim being to hit the upper 25% band of the 812’s performance – anything else would have been sheer irresponsible. Same road, same challenge, lots of open space, only me… and a 789 bhp Ferrari. You need total concentration for this, and relax to avoid tension at the wheel; the consequences of sudden imbalance or hesitation in a car with this level of performance could be nasty. But the 812 and I were on song. It was my first and only chance to explore performance at this level and I was not going to miss it.

Behind me was a crescendo of sound from the 812 – if only I could have recorded it, screaming by tone rather than strain, excited, animated and tuned to the millisecond. Yes, this one had daunting speed – a matter of how fast you‘d dare to go into a bend, rather than any doubt of the car’s ability to match your courage. And that’s the point: this one was maybe too fast for a road car, and as its owner the number of times you hit the ‘this is why’ zone in the 812 may be few and far between, at least on the road. To really enjoy the 812, you should be skilled behind the wheel with a rather busy track day schedule, interspersed with a good few German Autobahn blasts too.

Day three was race Day at Le Mans, and time to put the driving aside, enjoy Ferrari hospitality, and meet the drivers. By now of course, I’m all hyped up and equally keen to sit and watch the highly skilled pros exploit the two team cars on track. Both cars ran strong in the top six for much of the race until one suffered mechanical issues, but the other went on to win in Class.

The prospect of driving home in the Portofino loomed the next day. I was partnered with my good friend, Goodwood TV presenter David Green for the journey home. The Portofino is an excellent car by the way; to my mind everything its predecessor California should have been. It’s a proper Ferrari by any measure; not in Pista or 812 league of course for it was not designed to be so. Yet never was this car embarrassed or left behind in the convoy, and whenever the pace picked up the Portofino held its own.

Much of our motorway based trip home was spent chatting – the Portofino proving quiet and relaxed, flexing the Ferrari muscle whenever the right foot demanded. We both fell in love with the car (again) and could enjoy the virtues of its versatility.

So here’s the conclusion: I want three cars please – a Pista, an 812 and a Portofino. They share one thing in common: the magic of Ferrari.