Women Behind the Wheel

Her husband was known as ‘Two Jags John’. It is not surprising then that Beryl Little is often known to her friends as ‘Three Jags Beryl’. You see, she loves classic cars and Jaguars in particular, being the proud owner of a Jaguar XJS V12, a supercharged Jaguar S-Type R and a fully-fledged racing E-Type. Add to that a Mercedes SLK and a V8 Range Rover Sport, and you might deduce that she likes her cars to be powerful too. Here’s her take on things.

Tell us about your interest in classic cars. How did it all begin?

I have always had an interest in cars but it moved on when I met my wonderful second husband, John. Around 1989-90 he was known as ‘Jaguar John’ and latterly ‘Two Jags John’ because he loved Jaguar cars. At the time he had the Jaguar XJS V12 that I still have now. I really fell in love with that car. Later on, we acquired a classic 1971 E-Type, which I still own and has been modified for racing. I guess I caught up on his passion for these cars and eventually added to it with my own Jaguar S-Type R, which is now regarded as a modern classic. After John died in 2003, I felt I had to utilise the classic Jaguars and enjoy them. I already had a Mercedes SLK sports convertible which I still own as well. As a result of this growing collection I’ve joined Classic Car Clubs and taken them to club meetings. I also have a Range Rover Sport which I use mostly for day-to-day and rough weather driving, as well as a bit of fun.

One thing that is particularly important is that John and I have often taken the XJS to Monaco at the time of the Grand Prix; we used to take different cars on that track as amateur drivers. After John died, from about 2005 I started to go on my own, and now I try to go each year. The highlight for me is driving the E-Type around the Monaco racetrack in the ‘Owners’ drive’ before the race. One year I came second, of which I’m rather proud.

Owning so many is rather a labour of love, wouldn’t you agree?

Oh yes, they are rather demanding, and they do require a lot of attention and special care. Two of them I have stored and looked after away from home; there’s plenty of parking but only one garage and they really need to be stored in special conditions. And then there’s all the maintenance and service bills to keep them in good condition.

So, how does one person get to enjoy five cars?

Well, they all have different purposes. I live in the countryside and I have animals, so I absolutely need to have a 4x4. Then for enjoying the good weather it’s great to have a convertible (hence the SLK). And the Jaguars, well, two of them are historics; they were my husband’s cars and I wanted to keep them in memory of him – and I love them too. One is only a racer (the E-Type) so it’s used for that purpose and not on public roads. The XJS I do take to various classic shows and on the occasional long run. The Range Rover and the S-Type are my day-to-day cars and I do think you have to have more than one day-to-day car because anything can go wrong with them and I would be stranded. 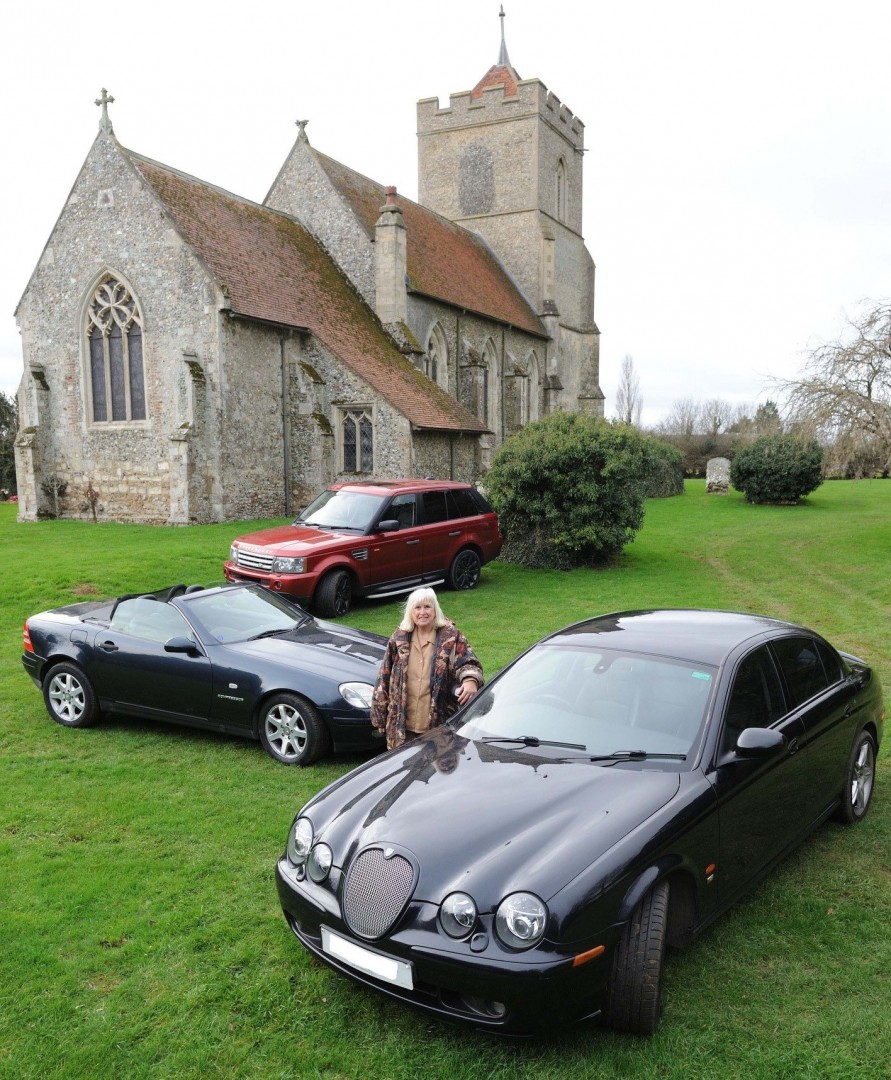 Is there any chance of ‘Three Jags Beryl’ becoming ‘Four Jags Beryl’?

If I won the lottery, I’d like the Jaguar F-Type SVR, or indeed the electric blue E-Type that was used for Prince Harry and Meghan Markle’s wedding.

It’s Sunday morning and a fine day. You want to go out for a drive, which of your cars do you choose?

Ah, now that’s a difficult one. If it was a short drive, perhaps the SLK with the top down, so I could enjoy the sun and the wind blowing. If it’s a long drive, then the S-Type R or the XJS.

What’s your favourite type of driving?

I love driving for pleasure in the Range Rover Sport, it’s so versatile, great on motorways and in traffic. Plus, so handy for the animals and their stuff. I sometimes take it on byways and tracks to experience the full off-road freedom. Also, I enjoyed the challenge of a dedicated Land Rover/RR course some years ago in the Lake District – I learnt a lot, even if it was a bit scary.

One Friday night, quite late, I took it off-road in the snow around NE Herts, when it was all eerie and quiet, with no other vehicles to worry about. I find long, late-night drives, on all types of roads, in any high-performance car very good for relaxing and marshalling thoughts on life.

I love driving on the M25 when it’s quiet; my husband, a civil engineer, built many sections of it. I do drive on tracks but I have a ‘latent aggression’ problem and what I found difficult when I was last driving at Brands Hatch was that the stupid little Caterhams and Radicals were really getting to me. I really wanted to smash into them or block them for intimidating everybody on track. I couldn’t stand them buzzing around me. Apologies to people with Caterhams and Radicals; I’m sure they’re not all the same.

Finally, with any of the five cars, what’s your most memorable moment?

When I married John, we took the XJS to our wedding, and then on to our reception and honeymoon. We both drove it part of the time and it holds my fondest of all memories.