“The Rose Garden bordered by a large yew hedge is planted with beds of pinks and China roses in soft pastel colours. ”

Take Your Seat in Style 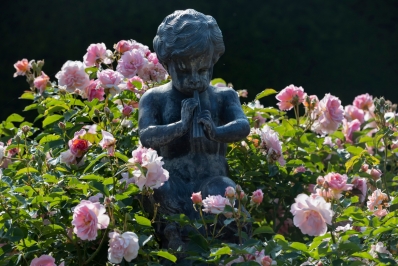 When Lord and Lady Bearsted bought the property in 1927, they were attracted to the house for its potential as a country retreat, offering space both to house their extensive art and porcelain collection and also to provide accommodation for their many guests. However, it was Lady Bearsted’s enthusiasm for gardening which inspired the creation of a garden that would complement their objects d’art and fine paintings.

Walking up the main drive enclosed on either side by Scots pine, holly, yew and tall beech trees, Upton House stands proudly ahead. Constructed of local honey-coloured Hornton stone, it is a wide symmetrical building. Due to the Covid restrictions, visitors must follow a one-way system through the forecourt and around to the rear of the property, where you can see the work undertaken during the 1930s by Kitty Lloyd-Jones on behalf of Lady Bearsted. Lloyd-Jones was a pioneering female garden designer who was one of the first to take a degree in Horticulture at Reading University in 1924.

Prior to the Bearsteds arrival, the gardens had been used to provide food for the house. Lady Bearsted had a different vision and wanted to create an area which could be used for pleasure and leisure alongside growing produce. Lloyd-Jones soon developed a good working relationship with her client and in 1931 she put forward her proposals to Lady Bearsted detailing her ideas for a redesign. Developing the gardens was not an easy task given that the edge of the South Lawn drops away over 30m through a series of succeeding terraces down towards the Mirror Pool. The South Lawn is located behind the house and is flanked on either side by yews and established Cedars of Lebanon, bordered on the southern end by a ha-ha. Standing close to the edge, visitors look down the bank with its terraces to the rectangular lake and the sweep of the hills beyond. These hills are not in the care of the National Trust, but the spectacular view is there for all to enjoy. 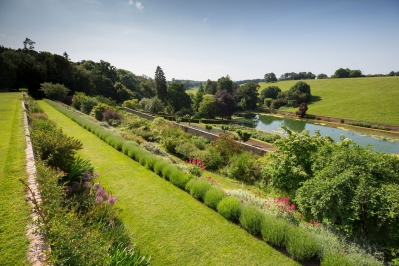 Lloyd Jones’ designs for the garden evolved as she stayed at Upton several times. Itemising the work that Head Gardener, Mr Tidman, would need to do, she put together planting lists for Lady Bearsted’s approval.

One section on the west side of the garden was formerly the location for two stew ponds. However, Lloyd Jones converted part of this area into a bog garden, putting in place a series of water rills, falls and pools to deviate the freshwater spring in the north-west corner. Today this area retains a wide variety of moisture-loving plants which are grown in complete contrast to the drier gardens on the south-facing terraces. These are home to various Mediterranean and South African plants which thrive on the well-drained ironstone soil. The south-facing border which had originally been planted with Michaelmas daisies and yellow flag irises now features the national collection of Symphyotrichum (Asters) and they grow three particularly important species; A amellus, S cordiofolius and S ericoides, and many cultivars as well as chrysanthemum which give a fine display each September.

Kitty Lloyd-Jones was also instrumental in creating formal gardens for her client. The Rose Garden bordered by a large yew hedge is planted with beds of pinks and China roses in soft pastel colours. Just beyond the Rose Garden is Lady Bearsted’s Garden planted in pale pinks and whites with flowering shrubs, herbaceous plants, and seasonal bedding. 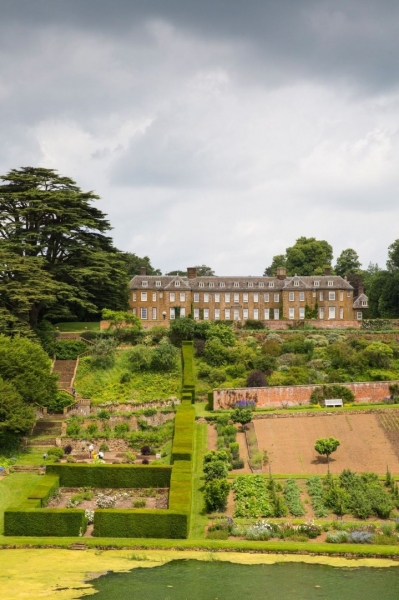 The middle terrace with its double borders running south for 60 metres is a profusion of colour during July and August with a riot of shocking pinks and yellows vying for attention. The North Lake border is in bloom from the end of May whilst the South Lake border on the edge of the Mirror Pool, is planted with a selection of shade-tolerant plants that enjoy the heavy clay soil. Today, the Kitchen Garden remains in productive cultivation: the upper slope is planted with vegetables whilst the lower slope boasts a collection of different soft fruits.

On the east side of the house, you will find the Quiet Orchard laid out by Lloyd-Jones in 1932. Here many varieties of apples and pears were planted on a grid system with drifts of narcissi in spring. Plum, greengage, medlar and mulberry trees have subsequently been planted.

Should you decide to visit Upton House Gardens this year, please be aware things may be a little different. Usually, the garden team of seven staff and 22 volunteers would spend a whopping 15,500 hours maintaining Upton’s high standards. In 2020, because of Covid-19, the Head Gardener managed the garden singlehandedly for five months whilst the rest of the team were furloughed or shielding, and volunteers were asked to stay at home. Thankfully, they now have the team back on board, but there is much more work to be done and it is expected to take three to four years for the garden to fully recover.

For further information on how to book your tickets to Upton House and Gardens, visit www.nationaltrust.org.uk/upton-house-and-gardens.

Please note that due to the steep inclines in the grounds, the gardens are not easily accessible for people with mobility issues.

Spend Time With Trees For Wellbeing This Autumn

With the utmost irony, it can sometimes feel like mental health is another thing to add to our list of concerns. It’s World Mental Health Day on 10 October. Will it set you worrying whether you are mindful enough, happy enough, sane enough?