When Elvis Knew Your Name

“I carried a weapon for many years ”

A couple of years ago, OX’s Jill Rayner spoke to Jay Osmond, who described Elvis as like a brother to his platinum-selling band. In November, I too chatted about the King with The Osmonds’ lead singer, Merrill. Presley told them, he says, that “if he had to do it all over again, he would go out into the audience, hug them – he loved his fans.” This went against typical management advice to keep a distance from devotees, and neither Elvis nor The Osmonds could realistically breach that divide due to “the mania” surrounding them. Elvis also directed the group to designer Bill Belew, who kitted them out in jumpsuits, many of which ended up being stolen from the vans and trucks that accompanied The Osmonds across the States. They’ve managed to preserve plenty, says the vocalist, “we are donating a lot of our records and stuff to the Brigham Young University to keep them intact.” Their mother was like a “second mom” to the ‘Suspicious Minds’ singer, he resumes, supplying him with reflections and guidance. He then recalls a three-week Elvis residency at the Las Vegas Hilton, the end of which signalled the beginning of an Osmonds residency there. He and his wife were due to take Elvis’ suite, he says, when they entered “it was all dark except for the television.” The performer was in the bed wearing sunglasses. “I said, ‘Elvis?’ He said, ‘Hello.’” Merrill apologised for the intrusion, and Elvis told them he’d be out soon. “I didn’t realise at that time he was suffering with a lot of depression and there were drug issues going on. But to be able to say you knew him, that he knew your name, is pretty cool.”

He’s also met with US presidents, producing the inaugural ceremony for Ronald Reagan, and ending up with the number for the Reagans’ ‘red phone’. He met Ford, Carter, and “also produced a couple of big events for George W Bush [who] wrote me some very nice letters that I have on my wall”. Then there’s his interactions with the Queen of England, “a real honour,” he says, “do you have time for a quick story?” I absolutely do. “The first time I met Her Majesty was at a Royal Command Performance. We were told to line up behind the curtain, you never speak to the Queen unless she speaks to you, and you never reach out to shake her hand unless she wants to shake yours – the rules were pretty strict. So, here she comes, saying hello to my father, mother, everything seems to be going well. She gets to Alan (everything goes well) and I was sweating, panicking, because of all these rules – I have an anxiety issue anyway. She finally comes to me and I reach out – like I wasn’t supposed to – to shake her hand and I said: ‘Hello, Mrs Queen.’” Worse than all that though, he continues, was the press snapping a picture of him wetting his lips, as you do “when you’re nervous”. He made frontpage news as the boy who stuck his tongue out at HRH. “I was the most hated guy in England that day.” The next time they met, “when she finally got to me, she said, ‘Hello, Merrill.’ I said, ‘Hello, you remember me...’ She said, ‘Oh yes, I remember you...’ I thought that was really neat – wonderful lady.” 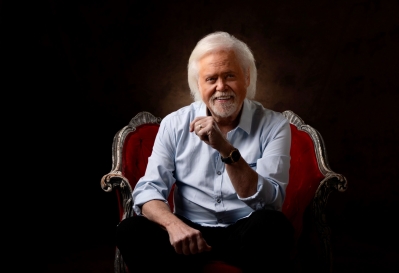 Other stories are more sinister, such as the time a whole collection of Osmonds records was found in one of Saddam Hussein’s bunkers. “I could tell you about the death threats we have had,” he adds, “I’ve had three constantly for years, Donny’s had so many more, Marie’s had them.” There was one “deranged” fan who wanted Merrill’s head for their wall, and the band also found themselves subject to the “crazy habits” of the Symbionese Liberation Army, the group that captured Patty Hearst in the 70s. Because of SLA’s threats to The Osmonds, “we were all deputised – we still are – I carried a weapon for many years.”

He’s kept journals during his career, not showing his grandchildren “because I just want them to be raised normally, thinking they have a grandpa who sings songs”. However, when they’re of a certain age, they’ll get access to Osmonds tapes that have never be seen before. They’ll see him in a jumpsuit, “going through all that we went through, the mania, running around country to country, writing the songs and doing what we did.

“There is a huge difference between hysteria and mania,” he points out. “We experienced hysteria but then we really experienced mania – people were literally out of their minds. Thank goodness we had parents that kept us on a foundation. We didn’t experience the drug scene, the sexual stuff, the stuff kids experience today that causes them to go off the rails. We were able to live in a bubble that soared right through it all, and for that, I’m grateful.”

Being in the music business full-time so young (“a very different lifestyle to most seven-year-olds”) had an impact on his schooling. There was an effort to fit lessons into their “extreme regiment” but lack of “a real good formal education” remains one of his regrets. They also “couldn’t have friends at the house because there was no time for friends”. When they went to public school, their father told them, that’s where they’d be able to make some. He was actually bullied there, kids wanting to fight a boy they’d seen on TV. “I would run quickly to get out of that kind of situation – a couple of times I got put in a corner.”

Their route into TV came courtesy of Walt Disney. The group had gone to California to meet Lawrence Welk who “would keep us waiting in the lobby, he was in his office but would never come out.” To avoid a wasted trip, their dad suggested a visit to nearby Disneyland. “Our mother used 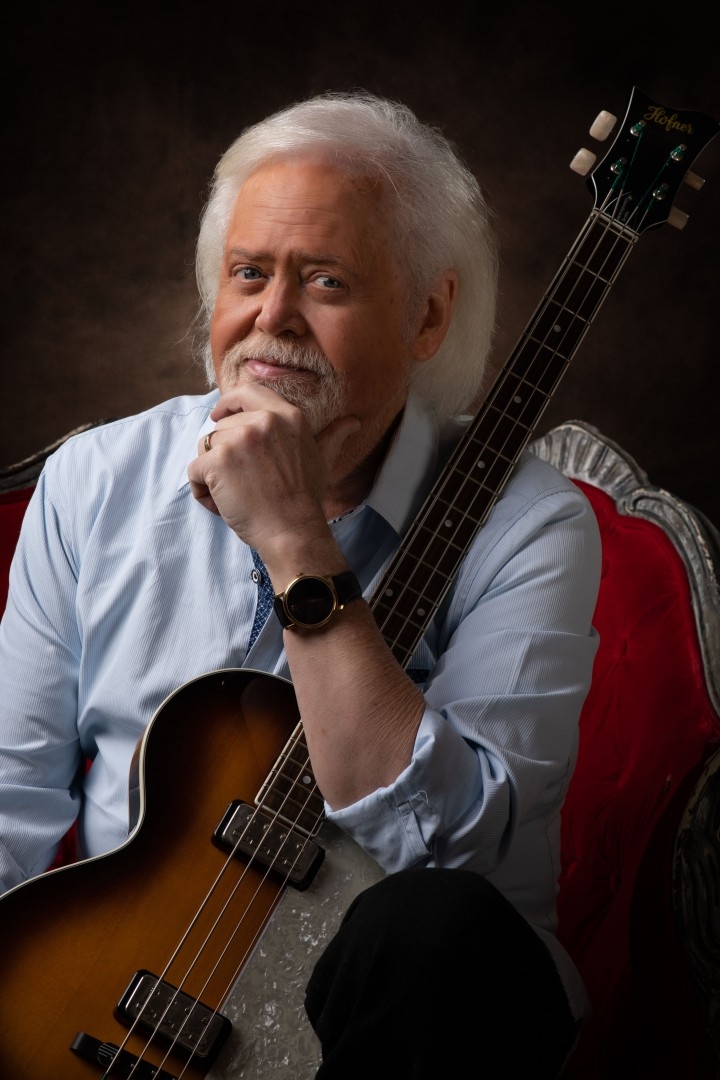 to make our clothes,” he starts, “and she would dress us the same because we appeared in a lot of barbershop shows.” Thus, The Osmonds were walking down Main Street “looking exactly alike” when The Dapper Dans (the barbershop staple of Disneyland) came by on their four-person bicycle. “They said, ‘Are you a barbershop group?’ and we said, ‘We are.’ Then The Osmonds sang a song, attracting a crowd, before singing another. “One of The Dapper Dans went and got somebody we didn’t know, this guy named Tommy Walker came out and heard us sing. He said, ‘Hey, come with me.’ We followed into this office area and there he was: Walt Disney.” Walker instructed them to sing for the producer and they obliged with ‘I Want A Girl’, “a hat and moustache routine – my father must have had those in a bag or something.” Throughout the performance, Jay’s moustache repeatedly fell off. “We thought we were bombing because the whole song was supposed to be a precise barbershop song. Walt started to laugh and that made it even worse in our minds – ‘Oh boy, here we have one big shot and he’s laughing at us!’ But after, he said, ‘Keep it in, that’s what makes you guys awesome.’ He offered us a job right there and then to walk around the streets of Disneyland singing.” About a year later, Disney invited them onto his TV show.

It was here that Andy Williams’ father spotted them and asked them to audition for The Andy Williams Show. “We reminded him of his boys,” Merrill says, “The Williams Brothers, when they were singing together. We got down there, auditioned, Andy put us on a couple of the shows, people wanted more, and the rest is history.”

The Andy Williams Show is where they learnt to play instruments and dance; a programme of that calibre offered “the best training. The work was intense,” he recollects, “because you wouldn’t be invited on the show unless you had something new and different every week.” For one of the Christmas shows they had to ice skate – the routine’s on YouTube – with Donny gliding through all his brothers’ legs at one point (and that was before the fireworks came out).

Fifty years on Merrill is still performing, paying tribute in his upcoming concerts to Elvis, Neil Diamond, and Paul McCartney who gifted him one of his basses in the 70s. McCartney also came to The Osmonds’ defence once – when the press was knocking them for being “too squeaky clean” – advising people to listen to the quality writing. “We made arrangements to meet with him and became friends,” he says, “it’s stuff like that that’s kept us going. This is my 62nd year in the entertainment business – I’m still doing my thing.”

Originally destined for 2020, Merrill will be coming to the UK in 2021 for a series of special shows – An Evening with Merrill Osmond – performing all the big hits from The Osmonds’ back catalogue, his popular solo songs and a few of his own favourites. He’ll also talk about his experiences growing up in one of the world’s biggest bands, the famous people he has met, life in The Osmond family, and the stories behind the songs. Alongside his live band, Merrill will be performing such hits as ‘Love Me For A Reason’, ‘Crazy Horses’, ‘One Bad Apple’, ‘Let Me In’, Goin’ Home’, ‘The Proud One’, ‘I Can’t Stop’, and ‘Having A Party’. Merrill is also hosting a serenity weekend in the UK this spring. Find out more at