With Thanks to Pedro Pepper

“My dad’s face alone was worth it all. ”

2019 saw the introduction of Hannah the Spanner, a collection of fun and engaging children’s novels written by Stuart Simmonds in time for his daughter Hannah’s 21st birthday. Here, we speak to the ex-pro cricketer ahead of his latest release, Harry the Karate Monkey, written for his other daughter, Lucy. We begin by asking if he’s been playing any cricket during this year of COVID-19…

“I went back to play a couple of years ago,” he says, “for the Sussex Over 50s in the County Championship, so this is my third season back. For my sins, I came out of retirement which has not been too bad. There’s a lot of people this season who have said, ‘Listen, if there’s no dressing room banter and there’s no bar or tea, then I’ll skip this and see you next April!’”

What aspects of the professional game do you miss?

I didn’t play much, just a few games, but I was around it for a while. I worked for Sussex for years and I did stints as an overseas player, especially in South Africa. You’ve got to be pretty decent to get there and be around it in the first place but when you see the top boys you think, ‘They’re just playing a different game from everybody else.’ When you can bowl in excess of high 70s/early 80s and scare people on the local scene to death, and then come across people who bowl at 90 mph, you suddenly realise the difference is just chalk and cheese. But it was brilliant knock around with them and play with utter legends. For that, I am incredibly grateful.

I went to South Africa in ‘95/’96. It was a brilliant time to be there, not only for the cricket, but Mandela had just become president and England just happened to be having their first majour tour. Top-grade club cricket in South Africa and Australia in those days was easily as good as county cricket here. To be a part of that was a privilege. Of all the things I did, that’s the time I look back on as my favourite. Also, for years I always wanted to play for Sussex and although I didn’t get to play much, when I finally did, that was a good day. My final highlight comes later… My hero growing up was David Gower – he’s the reason I played cricket from when I was a little boy. He came to the book launch of my cricket autobiography, Watching With My Heroes. I didn’t tell anyone he was coming just in case he didn’t, but when he turned up, I said, ‘Dad, I’d like to introduce you to David.’ My dad’s face alone was worth it all. 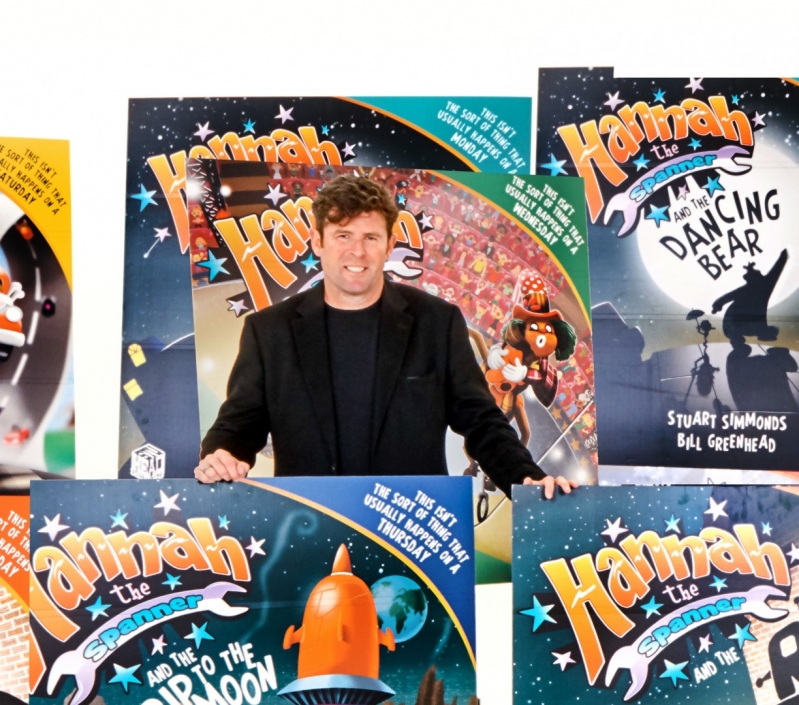 So, how does a former cricketer end up writing books for children?

It was the girls bringing home a succession of dreadful books that they probably just picked up because they had to bring books home. There was one called Pedro Pepper which was so unbelievably bad… I read about two pages before tossing it off the bed. I should be quite grateful to Pedro when you think about it!

How did you meet your illustrator, Bill Greenhead?

When I met Bill, it was to sketch up the front and back cover for the cricket book. When I told him these plans I had to do the kids book, he jumped on it immediately and started sketching straight away. Before long we were on our way.

Hannah the Spanner and Harry the Karate Monkey are kids’ books – are you thinking about the grownup readers while writing them?

I think about the adults as much as I do the kids. I think of the mums and dads or grans and grandads who forever read books to their kids and I try to make sure they’re not waiting for that 15 minutes or so to finish. I want those books to make the parents giggle along, think it’s quite funny and not dread it the next night. I’ve based the Lucy stories in the same world as the Hannah ones – they go to the same school, have the same headteacher and the same lazy deputy head. (I used to work with this incredibly lazy deputy head who did nothing other than tell people how busy he was and eat sandwiches – I kind of based it on him.) It’s been a lot of fun, something I’d never thought I’d end up doing.

I used to work in schools, so it’s been quite nice to go back. We do the workshops around trying to get them into reading and the different ways you can do so. My daughter Hannah didn’t take to reading that easily when she was a little girl and making up stories on her bed was one of the ways of trying to get her involved. She started out reading football programmes and now she reads all the time – it’s amazing how you can do it. We do all sorts of different things, especially trying to get the kids to use their imaginations. We try to get them to make up something, have a go at something; if you like art, draw the characters you see. I’m a great believer that nearly everyone will get there at their own speed. You get hordes of pushy parents who are like, ‘If they’re not reading War and Peace by the time they’re six, then we need to send them here, there and everywhere.’ We try to make sure everything we do is not like the sort of thing you’d normally get at school, so the kids really enjoy it.

Burford Lit Fest 2022 will take place 22-25 September 2022 to bring authors and booklovers together in a way that is both accessible and as a ‘not for profit’ festival, affordable.

John Retallack’s Oxford Playwriting Course is now in its fifth year, but its roots run much deeper, the course now attracts students from all over the British Isles.

Dr Chris Thorogood, Head of Science at the Oxford Botanic Garden and Artoretum talks about his new book, Chasing Plants documenting his adventures.

Poet and writer Nancy Campbell’s latest work, Thunderstone, describes how she came to live in a converted caravan on a strip of neglected woodland between the canal and the railway north of Wolvercote in Oxford.