“With over 900 years of history, Greys Court was first mentioned in the Domesday Book when the de Grey family owned it.” 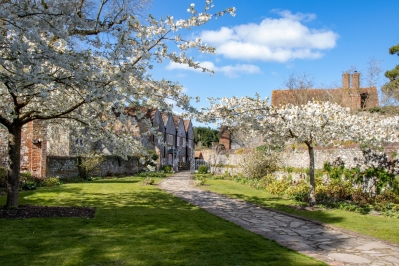 With over 900 years of history, Greys Court was first mentioned in the Domesday Book when the de Grey family owned it. Protected by the folds of the Chilterns, an interesting Elizabethan gabled house built by Sir Francis Knolly incorporates part of a medieval manor. Although in later centuries the house was modified further by various owners, the gabled Elizabethan house with its accompanying medieval towers which stands on the western edge of a 14th century courtyard, sits comfortably in its surroundings.

In 1937, attracted by the magnificent views afforded from Greys Court across the Chilterns, the property was purchased by Liberal Party politician and business owner, Sir Felix Brunner and his wife Lady Brunner, granddaughter of the Victorian actor-manager Sir Henry Irving. Together they renovated both the house and gardens further. The property was entrusted to the National Trust in 1969; Sir Felix died in 1982 but his wife continued to reside at Greys Court until her death in 2003.

When the Brunner family took over ownership, the gardens were in a sad state of neglect and Lady Brunner was mainly responsible for the design of the gardens as they are today. However, there have been several other female gardeners associated with Greys Court before her, including the Stapleton ladies who resided in the property during the 19th century. Catherine Stapleton’s claim to fame is having a pelargonium named after her: Pelargonium Echinatum “Miss Stapleton,” which is still grown today. 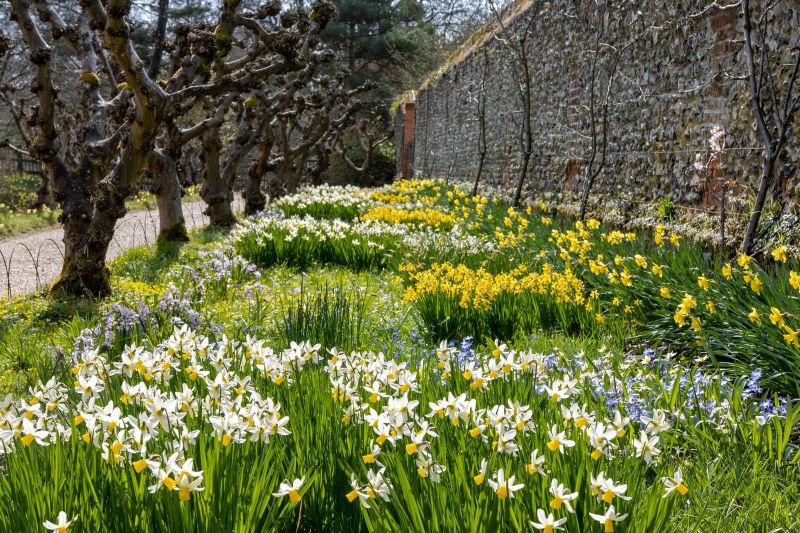 Lady Brunner’s vision was to create a garden that was a haven of tranquillity, which she wished to share with visitors. Created amongst the ruins of a fortified manor, the gardens are split into ‘rooms.’ This includes the ‘White Garden’, which has a loggia built in 2002, that surrounds a small heart shaped pond. From here you are led into the walled Rose Garden which rosarian Hilda Murrell advised the Brunners on its planting; this area comes into its own in June when a wide variety of roses in a range of colours, come into bloom. The borders surrounding the Rose Garden are planted with herbaceous perennials in shades of pink, purple, yellow and orange.

The three-acre estate offers a subtle beauty during the early months of the year when the highly fragrant winter flowering shrubs are in flower. The air is filled with the honeyed fragrance of Chimonanthus praecox (winter sweet) with its delicate profusion of yellow flowers competing for attention with the highly perfumed winter flowering Lonicera (honeysuckle) in the Cherry Garden. Other winter flowering shrubs include Viburnum and Hamamelis (witch hazel). In January, an abundance of snowdrops burst through, filling the area near the maze with their delicate green tipped white flowers. By early to mid-February, early daffodils start to bloom, providing a sure sign that spring is upon us.

Another riot of spring colour can be found in the Cherry Garden which has undergone restoration during this winter and may not look quite as good in spring 2022 as it normally does. By early April, beautiful white flowers fill the garden with their blossom. As the blooms start to fade, the confetti like petals fall gently on to the cobbled path. A tunnel of crab apple blossom in shades of pink, planted around an avenue of ballerina hoops, usually flowers at the same time as the cherries and the fruit tree blossom in the orchard becomes a haven for wildlife each spring. Providing a great source of nectar for pollinators, the grass around the trees is left to grow long so the area becomes a meadow. 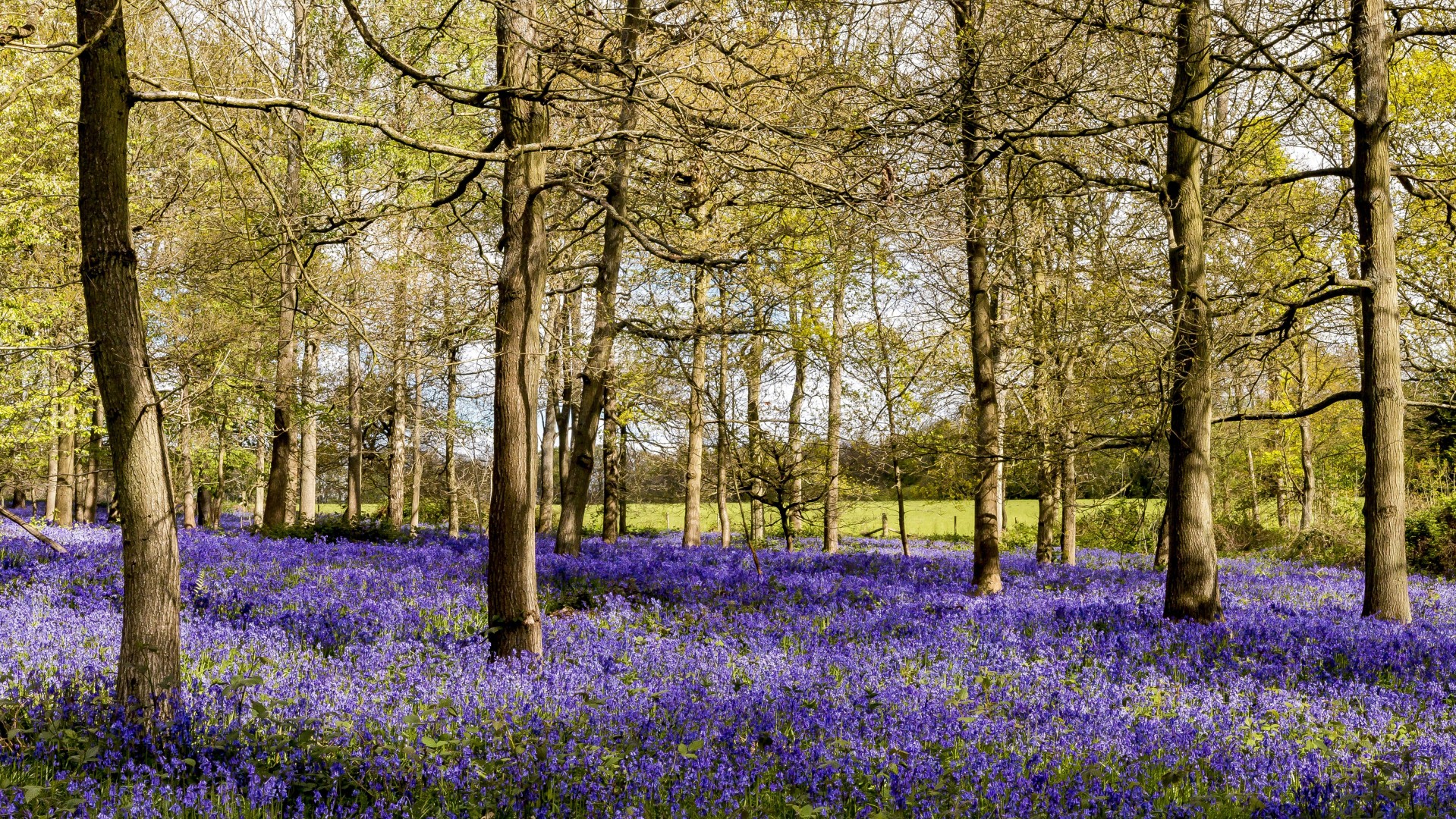 Depending on the progress of spring, native bluebells start appearing around mid-April. They can be found throughout the estate, with a sea of natural native bluebells at the beginning of the estate walk. However, the real show stopper are the bluebells in the Spinney Wood, where you’ll be able to get a closer view of the carpets of these beautiful flowers, particularly if you follow Sir Felix’s path.

By May, the magnificent 130-year-old Wisteria sinensis, planted in 1890, is in flower in the Wisteria Room, which connects the Rose Garden to the Kitchen Garden. Dripping in fragrant purple blossom, it is under planted with hyacinths, making this area of the garden is a sight to behold.

The Kitchen Garden was first planted as part of the Second World War ‘Dig for Victory’ campaign. It remains filled with fruit trees, bushes and espaliers, a range of vegetables and salad crops coupled with companion planting of flowers and herbs.

The Oriental style Moon Gate and Bridge which connects the grounds near the house to the farmland, is home to swathes of blue irises, planted to look like a stream of water underneath the bridge.

A walk around the wider estate at Greys Court on the estate walk will provide much to admire and enjoy, even inspire you with ideas for your own garden. For further information about Greys Court, its opening times, the annual Easter Children’s Trail and bookable bluebell walks, please visit  www.nationaltrust.org.uk/greys-court

Over the past couple of years, our outdoor space has become more important to us than ever. If you have wanted to do something with your outdoor space but not yet taken the first step perhaps the 2022 is the right time to get started.

Plant Colours to Enhance Your Mood

We know the colours we use on the walls and soft furnishings play an important part in making our indoor environment feel peaceful and a like place we want to spend time in. But what about your garden and choosing the right colour plants to ensure our outside space is all that we would like it to be?

Are you looking to create stunning summer flowering pots and hanging baskets this year? Tuberous begonias love growing in shady parts of your garden  and  do well in hanging baskets  and tubs,  and,  although they grow in borders, flamboyant lilies also thrive in pots to give height  and  fragrance to your scheme.