“I smell of very expensive cologne or butterscotch.”

I was totally disarmed when our time together began with him complimenting my hair. I confessed that, after a recent cut, I’d been unsure whether I was happy with it, to which he replied, “I’m so pleased you thought you had a terrible haircut and that I thought your hair looked marvellous, I’m so pleased it’s that.” And I could see that – genuinely – being able to give a sincere compliment and make me feel better about myself truly gave him pleasure. And this gave me my first indication that Anton du Beke could just possibly be the most charming man in the world.

Enough about me, Anton. In this issue of OX, we’re celebrating the re-opening of arts venues which, after a few staggered starts are mostly fully functional once again. I counted three tours that you’re involved with over the next few months. You’re off like a rocket.

Well, everybody’s going out on the road and doing shows now, because I think people just want to be out in front of audiences again, doing their thing and having that connection. There’s nothing like standing on stage: it’s lovely. I'm very lucky that I get to work on television, and I get to work in theatres. They are my two favourite things.

I love being able to do what I love on television but when you go out onto a stage and have an immediate interaction with an audience, that’s also wonderful. I think people really want that; this will be the year of tours. Next year will be a bit quieter but everyone’s going out now and having a go because they want to get out and meet people after two years of not being able to.

Theatre’s not like any other industry so – this is not making a political point – but it was always a problem when the government said we’re going to shut everything down; ok, fine. We’ll shut everything down for six months and, say, on 12 October we can reopen. Well, for some businesses you can just turn on the lights, open the door and you’re basically back in business. For a theatre that’s just the day we start selling tickets; we don't then open for another year after that, so everything in theatre had another wait. For performers, we've all the time off and then a bit more time because we had to wait for people to buy tickets again. This year I’ve just finished a show with Erin and then I’m doing the Audience With, and then I’m going out with Giovanni in the summer – I'm really looking forward to it.

You’ve described an audience with as interactive; is anything going to be off-limits?

No! Ask what you like. There will be questions and I'm going to get a mobile and put the phone number in the foyer and I want people to text me during the show. They can just text a question. I’ll do a number, do a song, do a dance, I’ll get the phone out and have a little look. I’ll go ‘Rachel's texted me a question. She said what underwear are you wearing? What? Where are you, Rachel? I’m wearing cling film – I feel so secure!’ So, it will be all of that – anything you like.

Watch out High Wycombe! Where are you based? 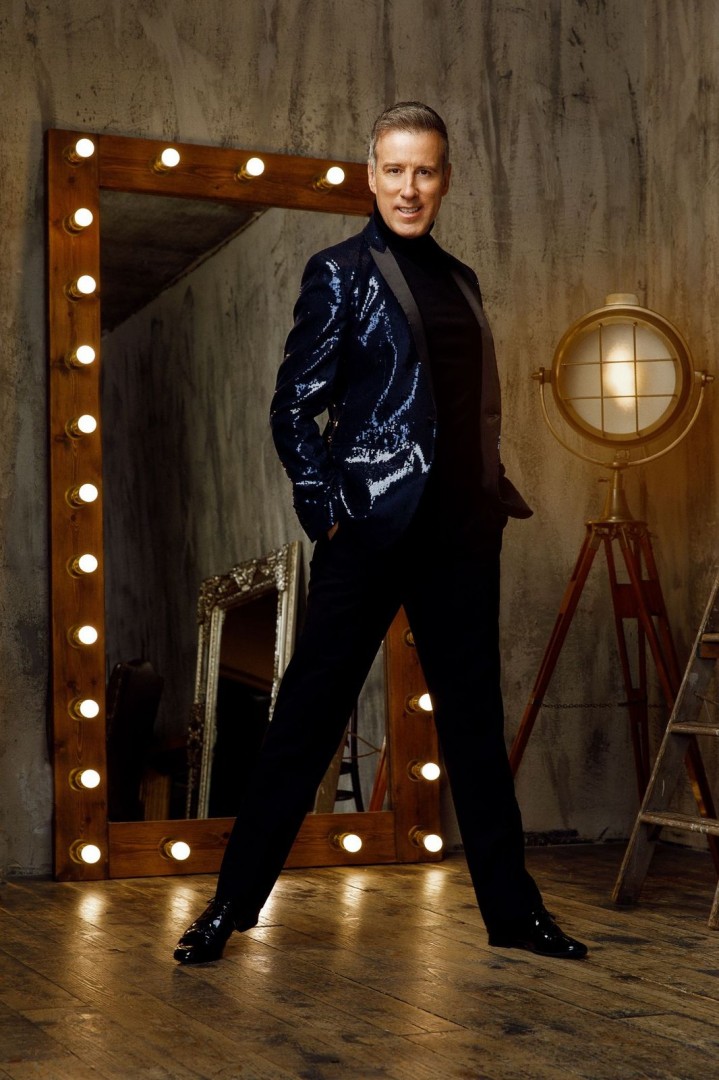 I was in Oxford recently doing the show at the New Theatre. That’s the one my children came to see actually; we did an afternoon show and it was great. I loved it because they are at an age now where they can watch it and enjoy it and I like a matinee performance. I think matinees are so civilised – such a very civilised thing to do, a weekend matinee.

I think Oxford audiences are particularly tough. I wonder how you find us?

That’s interesting, actually. It is a thing; you go from place to place, and the audiences differ. I did find the first time we went to Oxford I remember thinking ‘is Anton the funniest man in the world’ – as I like to think I am – but perhaps this wasn't the greatest thing that anyone has ever seen. I mean, I think it is but…then you go back the following year and the place is full again and you go ‘oh maybe that’s just the way they are’. Once you know them, we have a great time. I was in Oxford with Erin [Boag, Anton’s dance partner] recently, we do a bit of a chat, we have a Q and A because we like to have a chat, and you get to know the subtleties of the place.

We were up in York not that long ago and we were talking to the audience and included just little sort of references to Yorkshire – I mean we were taking the mick, having a bit of fun about the accents and how every place in Yorkshire has a different accent and they love all that because it makes it more personal. It sounds a bit contrived but it’s not really. I treat everyone as I find, and everybody is a friend, a pal; if they come into my audience, they are a friend. So, I befriend everyone, ‘hello my love, nice to see you’, and then we’re all in it together and having a nice time. That’s the way I’ve always been. It’s like knowing your friends; you know which one likes this and which one doesn't like that, and it’s the same with audiences for me. I get to know all of them

You are often described as Mr Showbiz – what about your private self?

I’m still showbiz at home; it’s a nightmare, it never turns off! My life away from performing is just about the children really. The things I like to do are my work, perform. Although I never really think about it as work – I’m going out, doing stuff, writing books, singing songs; I love doing all of that. Playing golf, and spending time with Hannah and the children. I don't want much more than that really, and if I can do all of those things in a day, that is my best day.

That leads me to my next question. You come across as a very positive person and I'm wondering whether that’s something you do consciously or if it’s just who you are. Either way, positivity radiates from you.

It’s not an effort at all – I’m just having a great time. I'm having the best time ever. I love what I do, I love doing it with the people I do it with, and if I didn't, I wouldn't do it. That’s also been my thing – if I don't like to be around a particular person then I won't be around them.

We live in a much more positive time. When I was growing up, back in the day, you couldn't do anything. Now everything's accepted; you see the fellas in the frocks, and you don't bat an eyelid and it’s all normal. Back in the day, people couldn't do any of that – they couldn't do anything. I couldn't even dance as a boy – you couldn’t be a dancer. We live in a much better time of acceptance and love – I sound ridiculous I can’t believe I’m saying this, but we do. Everything's a bit kinder. It’s a big thing at my kids' school: they promote kindness. They don't worry if the kids can read or add up because they know they’ll be able to do that – it’s a very good school – but the big thing is, you must be kind. I don't remember any of that growing up.

I say do what you like as long as you don't do harm to anyone else. I don't want to do anything at the expense of anyone else, so nothing malicious, nothing unkind. I’ll always have the joke on me it’s better that way. I can take it, I’ll be part of the gag.

That’s a heartwarming answer. Go on, tell us a secret about Strictly

The results show is filmed on Saturday night. 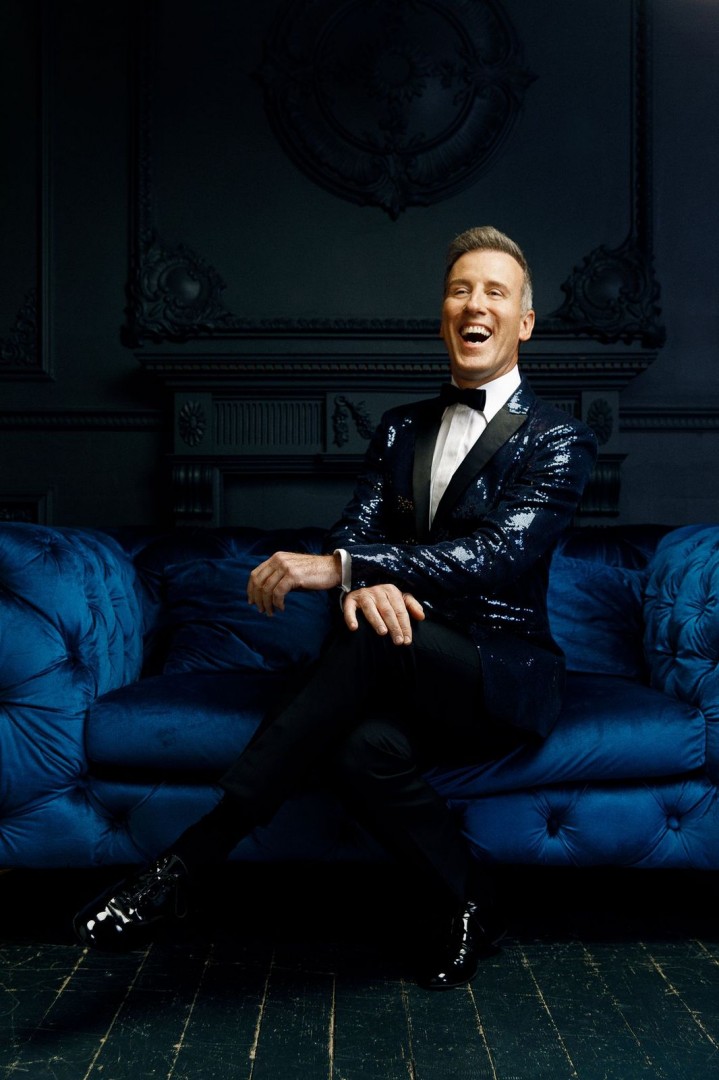 Please let that be true.

[I wish our readers could see the cheeky, boyish grin lighting up Anton’s face at this point.]

I will take the note. Who smells the best on the show?

Me and Giovanni smell the best on Strictly Come Dancing.

What do you smell of?

I smell of very expensive cologne or butterscotch. Don’t ask, it might be because I sometimes sneak a couple…

I use Creed Aventus.

Oh, he smells very nice. I don't remember what he uses at the moment but one of the Italian brands I imagine. Probably ‘Giovanni Armani’. Yeah, we are definitely the best smellers.

I’ve got more questions, but I’m aware of the time…

I’ll be quick, go on – one more question.

You’re a writer, a singer, a dancer - what other creative talents might you unleash on the world?

I want to be in a movie. I've got to wait for someone to offer me one. As soon as they do, I’ll take it. Just because I want to do it. If you could make that work for me, you and I will be friends forever.

I thought we were anyway, but I’ll see what I can do.

Anton du Beke is currently touring the country with An Audience with Anton du Beke. He will be at the Wycombe Swan Theatre on 13 May. For more information and links to book tickets, visit antondubeke.tv