“I have naturally developed my style, mostly through trial and error”

I was fortunate to watch Paul Oz creating one of his dramatic, textural oil paintings a few years ago at the Cheltenham Food & Drink Festival.

The picture was of a lobster created in 2cm thick oil paints on a large board. Watching Paul paint was mesmerising, and the finished effect was stunning. Since then, I have followed him on Facebook (as you do) and have been intrigued to see how he can portray his favourite sporting stars from the World of F1, famous celebrities from film and music, and even Her Majesty the Queen. So, to celebrate OX Magazine’s ‘Art’ edition, I thought it was time to talk with Paul to see how he creates his stunning artwork and find out more about this extraordinarily talented artist. 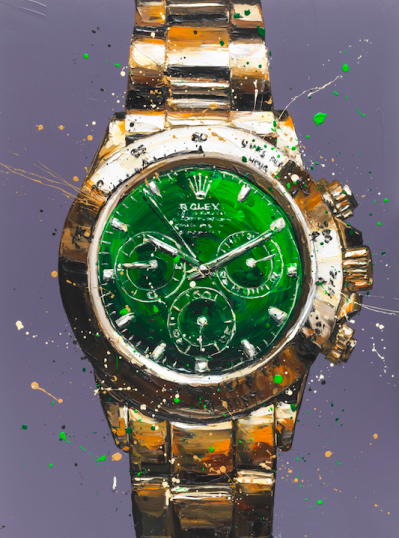 With no formal training in art Paul initially followed an academic path, opting to study at university before starting work as a software engineer. He started painting at weekends purely for relaxation but after holding his first solo gallery show back in 2008, it was only two years later that he decided to focus full time on painting. The intervening two years enabled Paul to create his own, unique style without pressure to make a living from his art. However, by 2010 it became his career.

Paul’s first love has always been F1 motor racing. “Perhaps it is a marriage of my background in competitive sport and studying Aerospace Engineering at university. I credit the basis of my creativity to decades messing with Lego. I spent my formative years dreaming of being a pro-cyclist, and I sure am proud to be British. My ‘80’s Kid’ solo shows explore this concept even deeper, as I have created 28 artworks over the last five years covering most everything I grew up with, played with, broke, idolised or was scared by. I was a great fan of Star Wars and now I have the fortune to run around Star Wars film sets, F1 garages and the Team Sky bus, being able to call it ‘work’. Being a fan and creating artwork of everything I love in the world has bizarrely come full circle.” 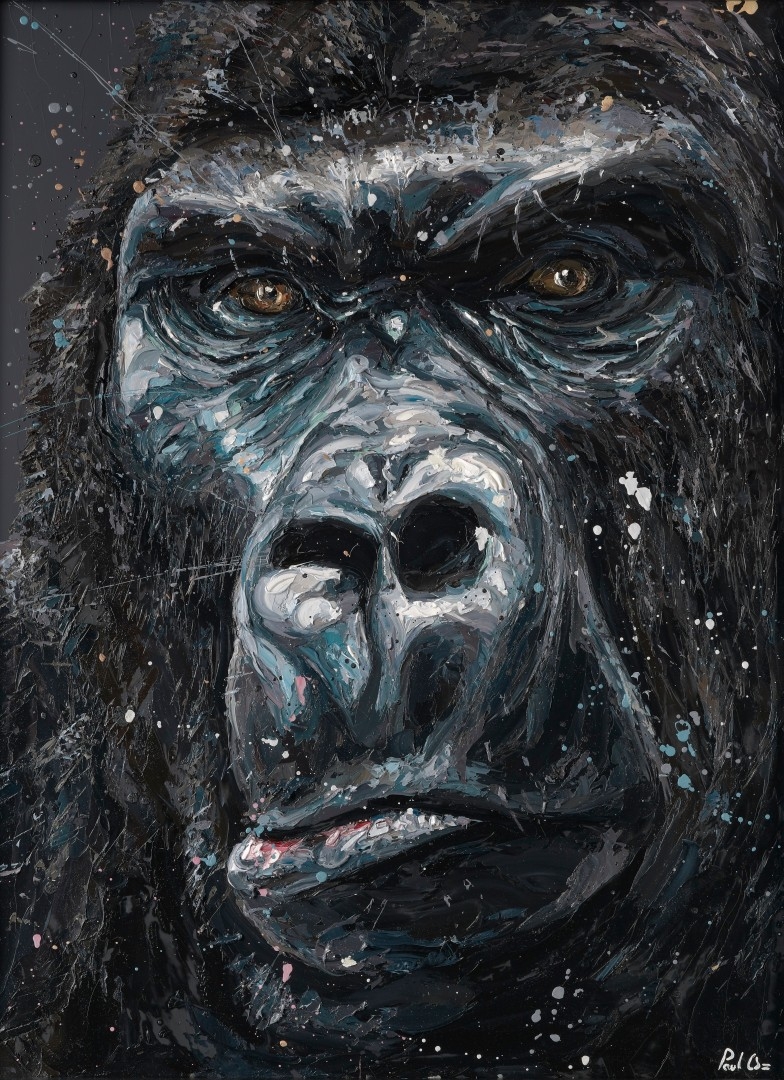 With his background, Paul thinks in 3-D. Consequently, his oil paintings are deep in paint, used to create incredible texture and character. For the past decade, Paul has celebrated the icons of F1, becoming increasingly well known for that. “I did my first piece when I was twenty-nine and it was a simple abstract with lots of splats and thick texture. Over the years, with no formal lessons or reading textbooks, I have naturally developed my style, mostly through trial and error. I am constantly thinking; experimenting diverse ways to do things from a structural and material perspective. With my sculptures I am lucky enough to be allowed to sculpt using the drivers actual race suits and helmets for the most authentic DNA and I constantly think ‘how on earth is this work?’”

Looking at the range of his subjects, which include Her Majesty The Queen, I asked Paul whether he works from commission or inspiration. “Both! I love our great country, collect British military and sporting iconography, and had intended to paint a portrait of Her Majesty for a long time, but did not manage to squeeze it into the schedule. Then, last year I received a commission – I can’t say who but it’s going to be hanged somewhere incredible. I’m so pleased how the painting came out; it’s actually based principally on an image of her waxwork, and a photo I took myself when I noticed how awesome the lighting on it was.”

His experience in engineering has allowed Paul to divert his creative talents into sculpting, where he is constantly pushing the boundaries. “I am lucky to be working with who I consider to be the most prestigious bronze foundries in the world, based in Stroud. This has opened up possibilities far greater than I could have possibly imagined. There really is no such thing as a crazy idea anymore, which is the most inspiring and empowering thing if you truly embrace it. My challenge with sculpture is to make my vision a reality, no matter what the technical restraints. Now I have taken my work into another art form, I am able to focus on immortalising the heroes of the sport I grew up with, in the most permanent of mediums: bronze. Most of my bronze projects are developed over a 10-12 month period – in secret, with a significant impact unveiling. With my ethos of modelling on real life for the ultimate in detail, over the past couple of years I moved away from sculpting my F1 heroes and chose to recreate an actual rearing horse. Believing that there is no such thing as a crazy idea, bringing an actual horse into the studio was the obvious thing to do! Together with the help of Stampede Stunt Animals, who spent a month training the amazing Lumi to rear on the spot in tight confinement. After several months work, I was able to create my rearing horse bronze sculpture entitled Alberto.”

So, what has Paul’s most challenging piece of artwork to date? 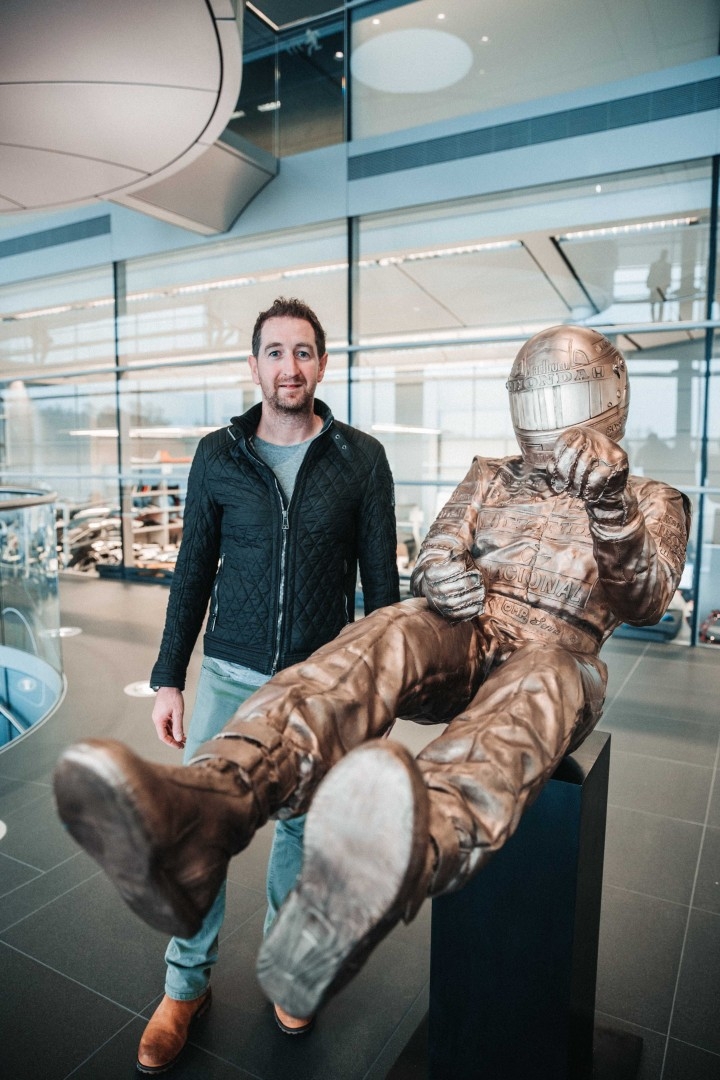 “This is something that I’m always pushing myself on – my best work is always the trickiest to pull off. The sculptures especially make me keep pushing the boundaries. For my most well-known work, in creating McLaren’s bronze statue of Ayrton Senna, we were inventing our concept of 3D modelling from real life, as we were doing it. No one had done that before and refined it to the detail needed for a life size bronze – it took months of trial and error, scrapping it and starting over before we got there. With oil paintings, it’s been steady progression for many years, even now every day I learn or realise something new. My style is quite strong, even aggressive, so I struggle to paint ‘pretty’, with a few notable exceptions. Anything stripey is always difficult, such as Lewis Hamilton’s rainbow helmet that I’ve just finished – the only thing that creates shape is light and shade. I always work from photos unless it’s still life such as Lego, and usually multiple photos. I never sketch though, just dive straight in with oil paint – which is why my paintings end up having such thick texture, because I’m messing around with it so much, adding layers and layers of paint until its right.”

Paul Oz’s three studios are now based in Gloucestershire and his work is exhibited around the world,