“I wanted to draw the animal to try and capture the essence of it and found such an imposing animal quite a challenge.”

The world is alive with millions of species of all shapes and sizes, and whilst they can’t show them all, this autumn the Oxford Printmakers Cooperative (OPC) is presenting a selection of thirty favourites in The Christadelphian Hall on Tyndale Road, Oxford. This is a new exhibition ‘Species’ as part of IF Oxford, which marks the 30th festival of science and ideas in Oxford this year.

“Printmaking in its own right is a scientific endeavour, requiring specialist equipment, its own tools, chemicals, specific paper and technical know-how.” says Catriona Brodribb of Oxford Printmakers Cooperative. “Although a variety of printing techniques will be in evidence, many of the pieces in this exhibition have been created using an etching process. The artist Rembrandt van Rijn first developed this in the early seventeenth century: it’s a process during which a metal plate is first covered in a thin coat of wax and a few other ingredients. Then the artist draws through the wax ‘ground’ with a needle. The plate is then immersed in an acid bath: the acid or ‘mordant’ creates the design by dissolving the drawn line or eating its way into the metal to create an etched surface which is inked and then used for printing. These lines hold the ink, and so when the plate is applied to paper, the design transfers to create a finished print.” 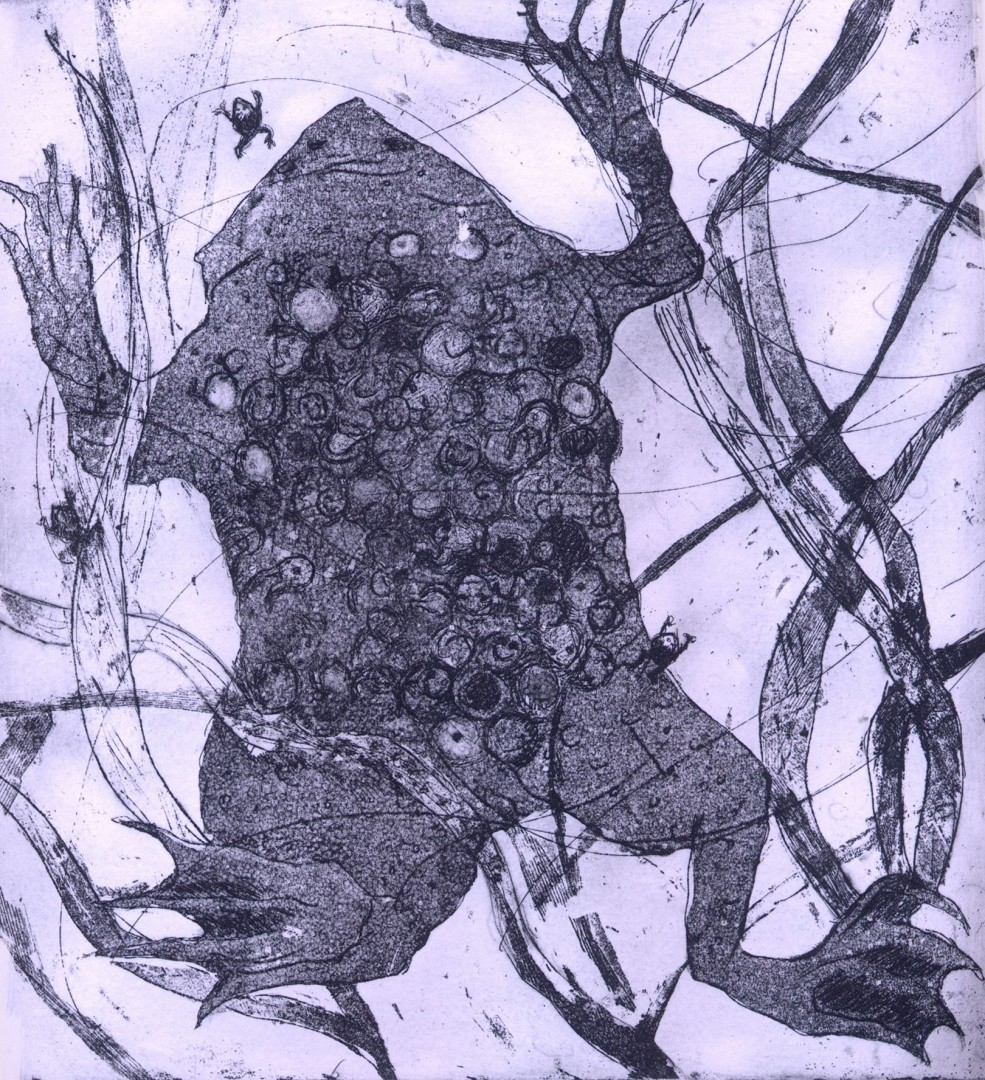 “By contrast, in woodcut, wood engraving and linocut techniques (all termed ‘relief prints’), the artist instead carves away the surface and inks up the remainder of the surface to create the print. It’s a process that involves both precision and skilful thinking, as the artists need to think in reverse, particularly when multiple colours are used.”

Traditionally, etchings are monochrome, and so for this thoughtful exhibition, the colours of the natural world have been rendered into a subtle and timeless collection of elegant tones and shades of black and white. The species depicted range from well-known local flora and fauna to the curious, the rare and the unusual, flagging up issues of climate change or extinction, and it’s fascinating to hear why each was chosen.

Inspired by Oxfordshire wildlife, printmaker Helen Ganly chose to make an etching ‘Jenny Wren: species Troglodytidae’. “The scientific name derives from the word for a cave dweller ascribed to the tiny, noisy Eurasian wren often found foraging for insects in dark corners,” she smiles. The name wren however is from an Anglo-Saxon word although there are wonderful Greek legends about this brave little bird. There is little plumage distinction between the sexes and their small size, and vulnerability to cold means that they are frequently found to be sharing their dome-shaped nests with up to ten other birds, and once sixty birds were found to be cohabiting in one nest. I had loved my ‘Jenny’ wren which for several years had scurried about in and under the honeysuckle outside the kitchen door. When she disappeared during the winter of 2019, I mourned her loss. I researched her species and have commemorated her in a limited edition of 25 etchings printed on Arches paper.”

Didcot’s Charlie Davies has chosen another popular local species for her etching, ‘A Little Kip’ which hangs alongside. “I have always loved dormice since reading Alice in Wonderland when I was small, so when Oxford Printmakers suggested a members' print project with the theme ‘Species’, my first thought was to produce an image of one of these sleepy fellows. I made this complicated little etching with hard ground and aquatint and a soft ground nest for him to sleep in. It is important for him to have a comfy bed as a dormouse can sleep for 6 months or more although sometimes, they wake up for a snack. They are such interesting tiny creatures who have lived happily on this planet for over 30 million years.” 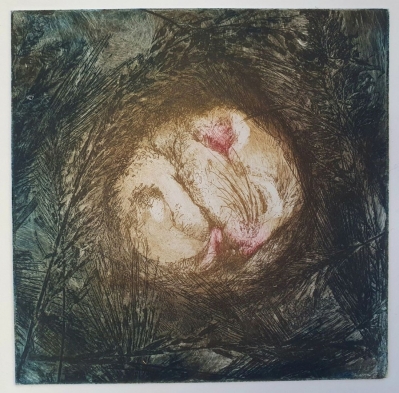 ‘Otters at play in Faringdon’ are shown in a wood engraving by Felicity Cormack. “I selected this, she explains, because during lockdown one of the things to do in Faringdon was to spot the otters that had moved into the town pond. It took at least three visits for me to be there at a time when the otters were playing in the sunshine. There were three of them and two youngsters played mock fights in the water before diving and then fighting again. I managed to take some videos and drew what I could see and then I made them into a design. I wanted to suggest the time they were up in the air contrasting with the diving. It’s a record of a beautiful afternoon and of that period when somehow there was more time to stand and stare.” 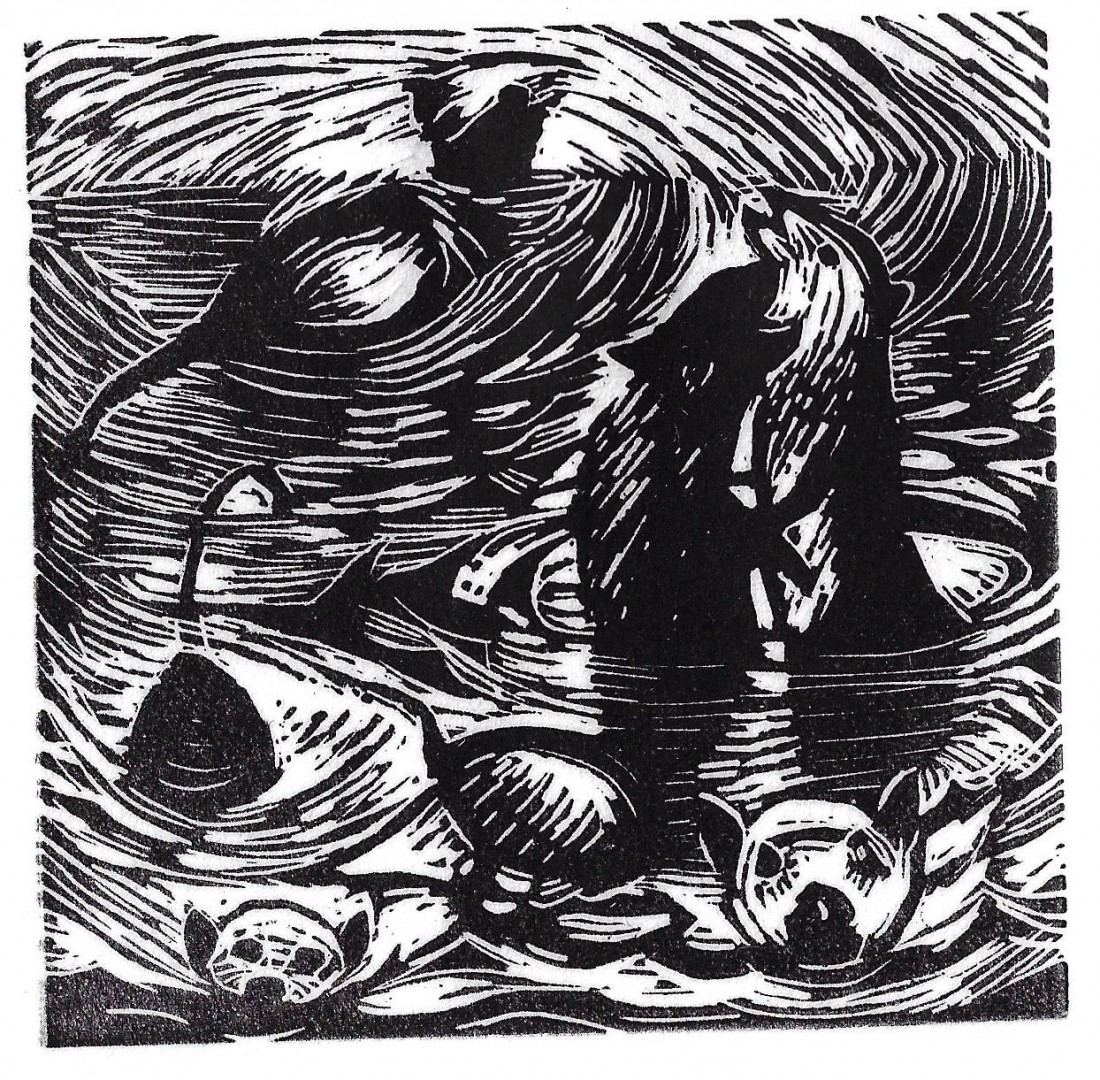 From further afield, Jane Peart’s black rhinoceros etching is based on a drawing she’d made of a black rhinoceros in London. “It was very sad to see such an impressive animal in a relatively small enclosure. It did make me think about the fact that animals, such as the rhino, are struggling for their existence and possibly in years to come we shall only see these animals in zoos. At the moment the black rhino is classified as critically endangered and three subspecies are now extinct.

There are vast swathes of the African continent where the rhino used to roam but sadly no more.

I wanted to draw the animal to try and capture the essence of it and found such an imposing animal quite a challenge. I hope the strong bold image does it justice.” 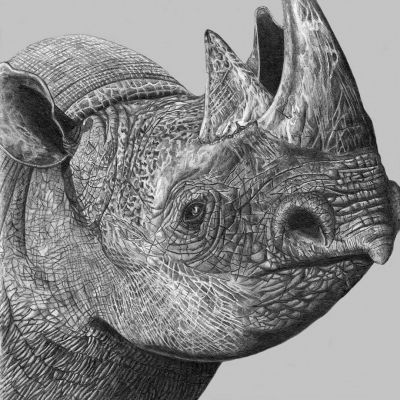 Via lichen and lizards and much more besides, the exhibition roams from the rhinoceros to the rhinoceros hornbill with ‘Roosting Rhinocéros Hornbill, Borneo’, a two-plate woodcut by Sally Levell who explains “I was extremely lucky to see several pairs of hornbills overhead coming to roost, one evening in 2017 near the Gomantong Caves in Sabah. These magnificent birds are mostly black but have long tails with white bands. They have amazing bills with a banana-shaped casque on top which helps to produce a loud barking-like call. The presence of rhinoceros hornbills (Bucerotidaeis rhinoceros) is a barometer of the health of the forest habitat, but unfortunately, they have largely disappeared from neighbouring Sarawak due to the extensive spread of palm oil monoculture. I lived in Sarawak in the 1980s when the call and sight of hornbills was a common occurrence, so it was very special to see them again in the wild, albeit in Sabah.” 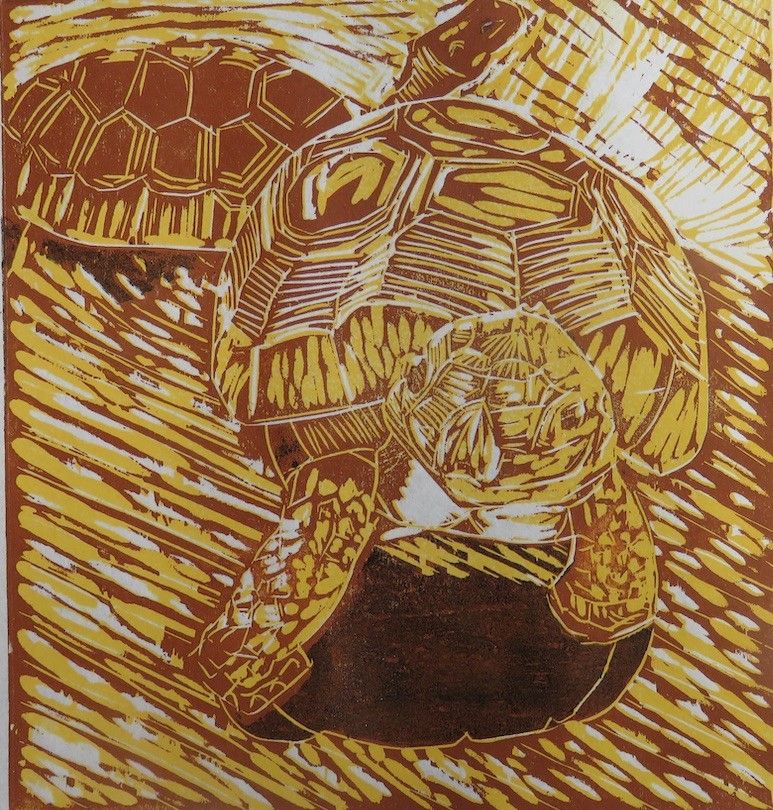 Last but not least, printmaker Mary-Jane Pearce puts people into the exhibition with a colourful etching and aquatint with stencil-print ‘Our Species under threat: Adam and Eve’. “The terrifying story of Adam and Eve came to mind as we saw life turned upside down by a pandemic in 2020, “she explains. “The story tells about a young couple whose world and lives are changed suddenly as a consequence of their behaviour, of eating from an apple tree. Did they understand the threat? Could they have imagined what it would be like? Further, the story tells us that all of the species carry the burden of this event. In my image, I question the responses and responsibilities of the species itself in this drama.” 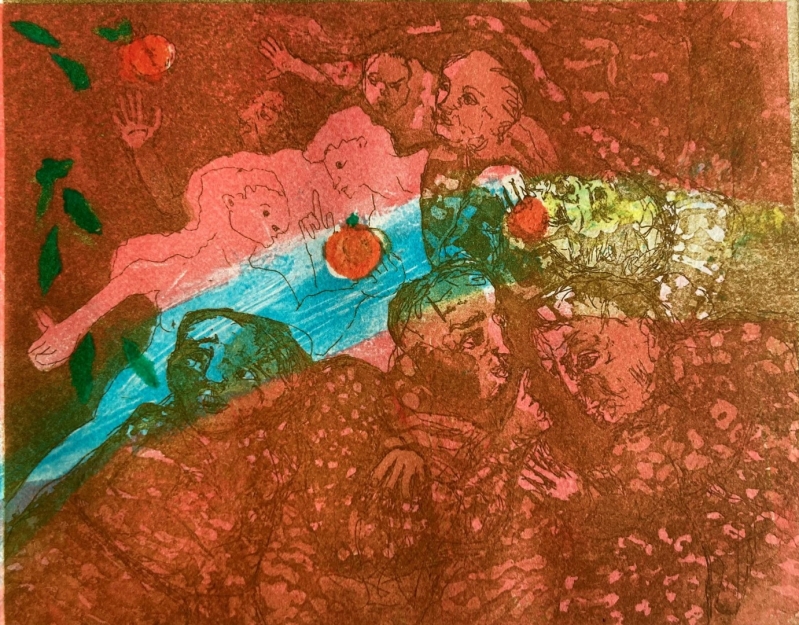 The exhibition can be seen on the walls of a working print workshop, where you can also see the specialist equipment used to make this and meet some of the artists involved. 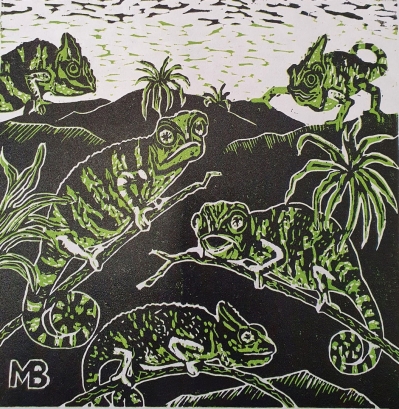 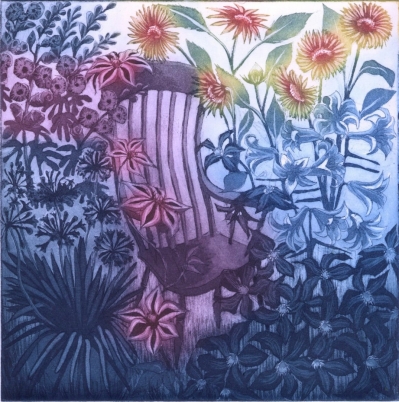