Art to take you abroad

My House Plants Changed My Life

As Oxfordshire Artweeks throws open the doors to more than 200 COVID-secure venues across the county, Festival Director Esther Lafferty talks to two artists who promise to take you beyond these shores this summer. 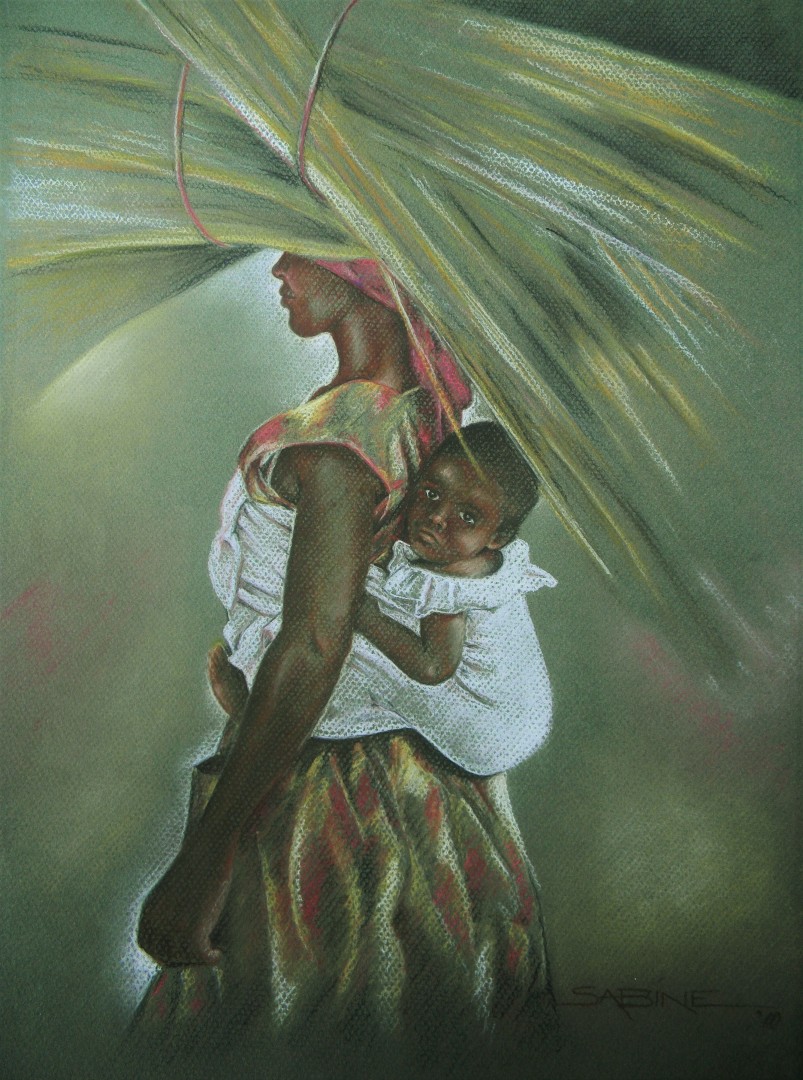 Didcot artist Sabine Barber – a newcomer to Artweeks this year – was born and raised in the Mpumalanga province of South Africa, and although she emigrated to Europe just over twenty years ago, it is the colours and wildlife of her childhood that inspire most of her art. She was raised on a rural farm and grew up loving nature, the great outdoors and the beating sun, and they still nourish her today. “I spent the days running barefoot and climbing trees with the local children and we had complete freedom to play and explore. I think about it every day and still miss it,” she says, “and so I will always paint Africa.”

One of her paintings shows a child drawing at the roadside: “That’s just how we were,” she smiles. “We’d pick up coals and draw on the pavements.”

Whilst Sabine is wistful when she recalls the endless sun-kissed landscape and the sweeping views of dry grass and red earth under giant skies, her paintings and pastel drawings focus on portraits of both people and the animals she remembers roaming in the wild. “I was always transfixed by people and animals,” she smiles. “Even when I was small, I filled home-made comics with princesses, personalities, and dragons and unicorns.” 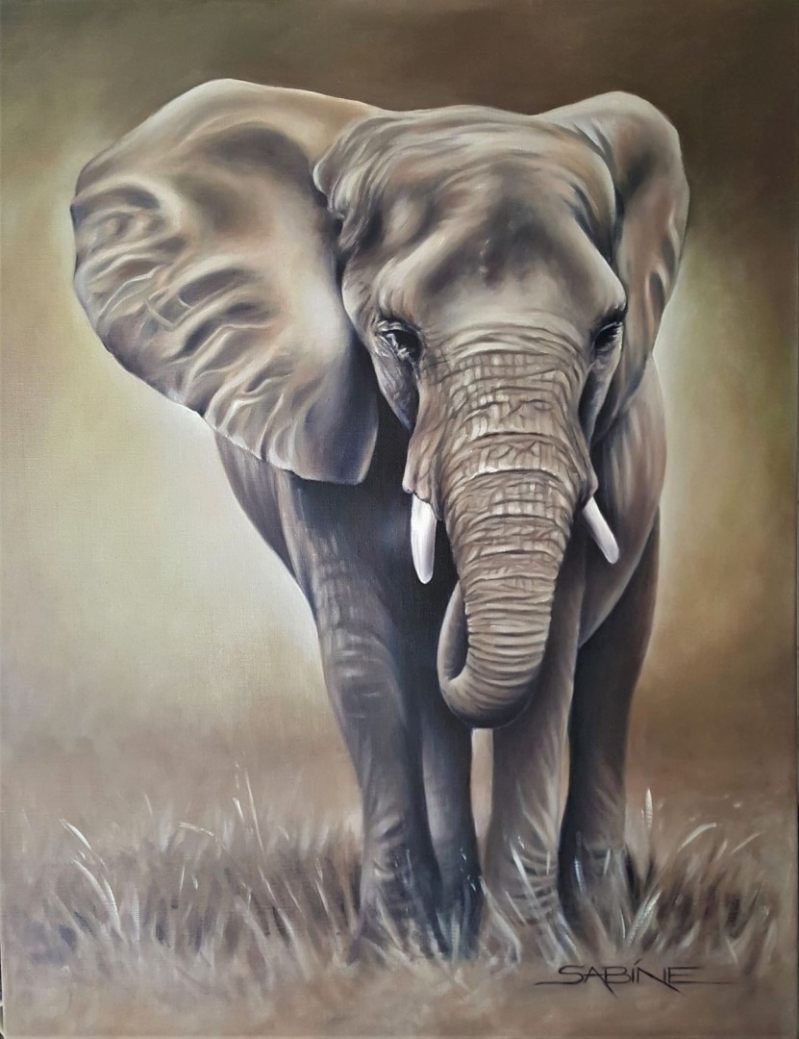 “Elephants are great to paint because they’re very expressive, and lions too, but leopards are my favourite. They are so sleek and streamlined and they have such beautiful eyes - some have blues eyes and others have amber or green – and I love the way they sleep in the trees. They seem so lazy in the branches that you’d never guess from looking at them at rest that they could rip you apart. Their markings are amazing and because of their different spots, each leopard actually looks very distinct.”

Sabine’s portraits of people celebrate African tribal women, something she feels is important because, as the world changes, these tribes, cultures and ways of life are dying out.

“I love to paint ethnic portraits!” she remarks, “There’s such depth and rich colour in African skin. For example, the Samburus in Kenya have a lovely dark tone, and it looks amazing against the incredibly detailed beadwork and bright fabrics they wear. In the rural parts of South Africa, where I grew up, the Xhosa and Zulu women wear patterned turbans and wrap themselves in bright blankets of pink, canary yellow or other really vivid colours and it is so striking. In the UK, this dress code might seem unusual or exotic but growing up this was how the people I saw dressed, and painting these pictures take me right back to those days.”

In each, you can see the life a person has lived etched into their faces.

“I feel that women have harder lives than men, certainly in Africa, she continues. “They work twice as hard as men and their bodies go through so much with pregnancy and birth, carrying children around while doing hard manual labour too. They’re so strong and dependable and I feel I can identify with them in a way I don’t so much with men. I enjoy carving out a personality in a portrait, layer by layer, and making it come alive. And yet, although each person has a whole lifetime of stories to tell, in each painting or pastel drawing I am purely capturing a single moment, a snapshot, a look or the way a shaft of light falls. 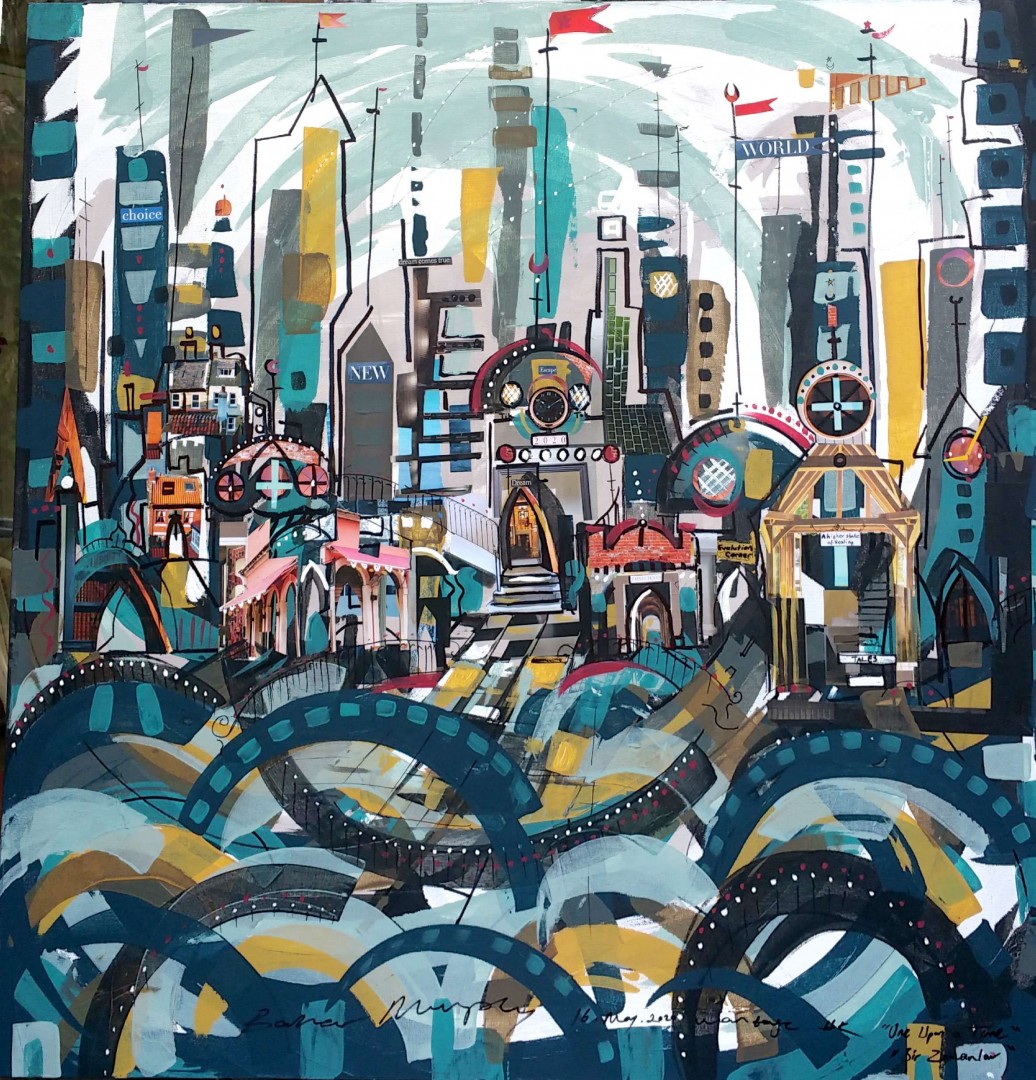 Over in Wantage, another artist taking part in the festival for the first time is Bahar Murphy, an interior designer by trade, and a fine artist. She grew up in Turkey and has also spent time both in the UK and in the Middle East and all of these places have influenced her art.

For several years, Bahar lived in Dubai of the UAE, overseeing the design of new Royal Palaces for The Al Qasimi, The Al Nahyan and other distinguished families, working from concept – with the architect – through to the finishing touches, sourcing art and furniture, wallpaper and luxury fabrics from around the world to create extravagantly and chic mansions for modern living. Most often in classical style with marble, gold and mirrors, each was set in stunning luxuriant gardens.

And it is both the structure of the built world and the details within it that inspire Bahar’s art. Her paintings are imagined cityscapes, that pull together international architectural styles with symbols and iconic motifs drawn from history, religion and global cultures. Taking the striking elements of the places that have influenced her, she builds new places with an exuberant dynamism, sweeping horizons and, often, bold colours to spark the imagination. 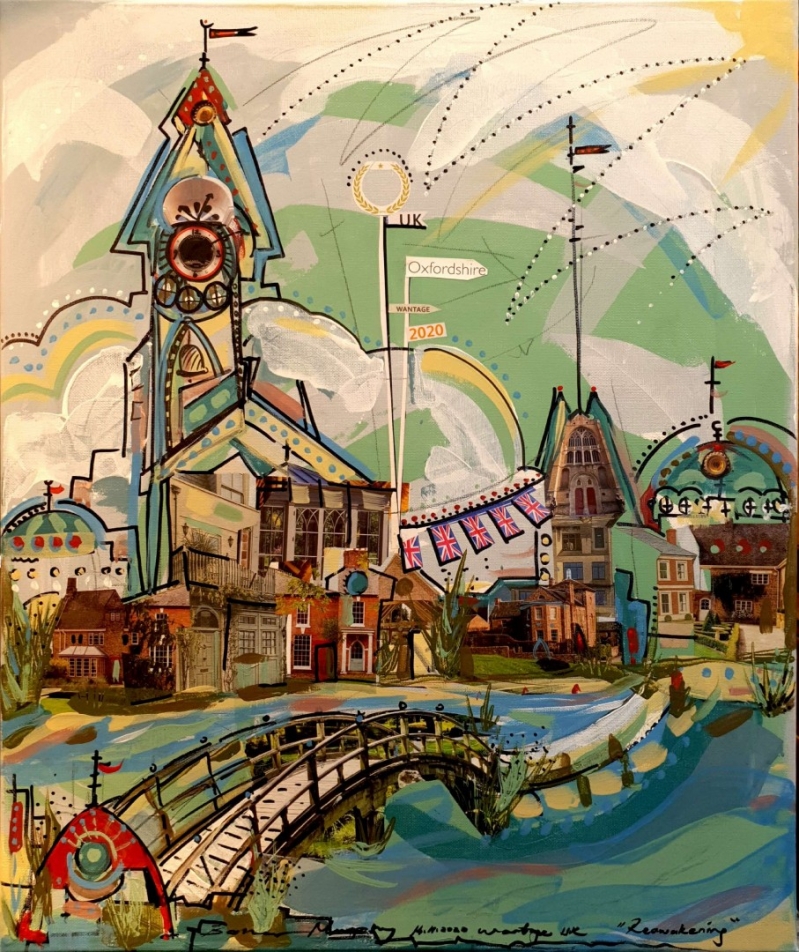 “I’m an observer,” says Bahar. “Wherever I go, I observe – people, places, perspectives – and I try and include what I have seen and experienced all around the world in my paintings. They are never of just one place: they are nowhere and yet they are everywhere. I am uncomfortable, politically, with what is going on in many countries, and I am passionate about global unity, that the world should see itself as a single entity whilst celebrating the wonderful diversity of cultures within it today. It’s that global ambition that I am representing in each of my pieces.”

Looking at Bahar’s paintings, you’ll see arches and domes, spires and skyscrapers, bridges and waterways, all interwoven into a glorious world for the viewer to explore. Each is a journey, full of iconic shapes and symbols from different cultures - minarets meet medieval clocktowers, Gothic skylines meet modernity, their coming-together exciting yet harmonious. Each could be a set for a magical dream or an aspiration for a future way of life.

“In May, during my Artweeks exhibition,” she continues, “although they are still a collage of elements from all around the world, the paintings on show have been particularly influenced by Oxford and Oxfordshire. It’s a beautiful county and I feel very lucky to be spending a few years here. I think to really understand a place, you should live in it! For me, Oxfordshire inspires a calmer, more subtle palette than the colours I use for lands under the burning sun, and so I have used gentle pastel shades and muted hues, although there’ll always be some bursts of strong colour too.”

You can find Bahar and Sabine at Artweeks venues 165 and 189 respectively.

For other Artweeks venues local to you, or to enjoy a virtual festival of Oxfordshire art, craft and design, visit artweeks.org.