and Other Oxfordshire Animals

Working quietly in her Broughton studio, animal portrait artist Sarah Bowman captures the power and grace of the horses in her paintings, explaining what it about these animals that draws her to them. 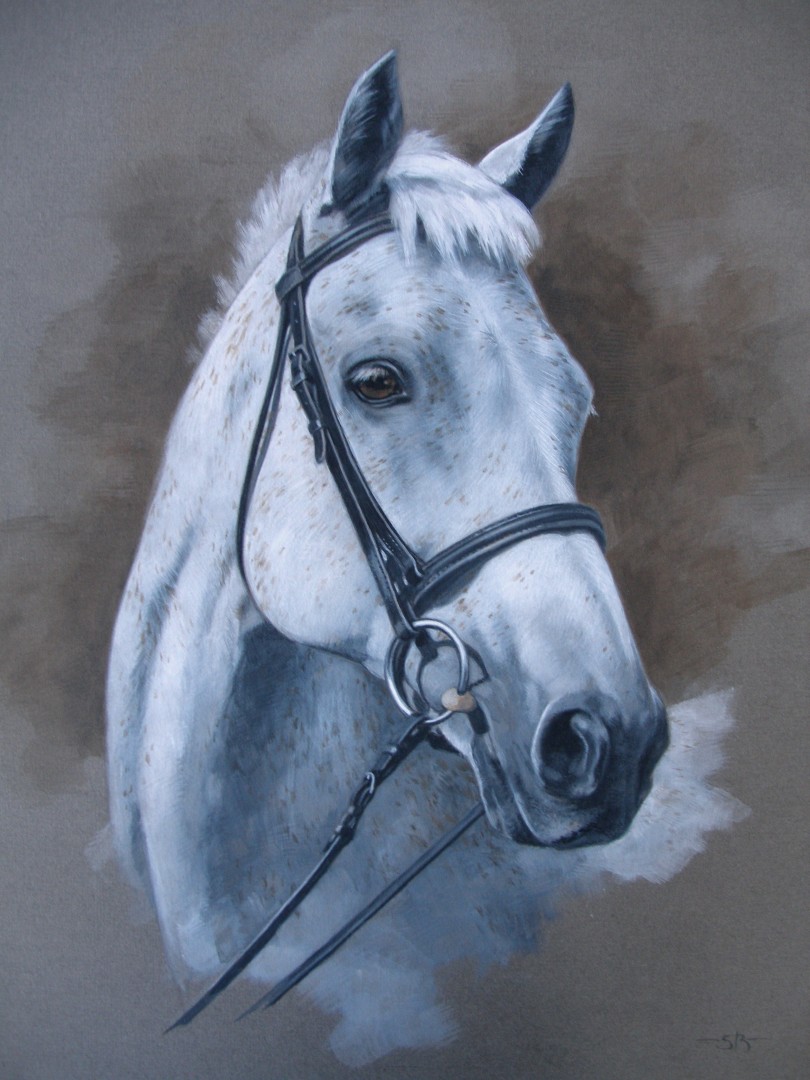 “Animals have been the one constant in my lifelong love affair with art,” she says. “Horses are all powerful, graceful, soulful and connected animals. I have always loved the challenge of bringing such characteristics to life through the use of paint. After the initial sketch I always start painting the eyes to immediately capture the individuality, build a connection with the horse and let the communication unfold. Either a single horse portrait, montage portrait, or within a natural environment I develop the story of the horse throughout the entire composition.

“Having lived within the heart of the countryside surrounded by animals, I’ve been witness to the raw and authentic relationship between animal and owner. The reciprocal commitment and passion between the two is why so many people are consumed by a love for these creatures, and the reason why I get excited when asked to include a rider or owner within a painting. As an artist I have huge respect for these extraordinary animals, and including the rider within a horse portrait enhances the power and grace of the horse.”

As a dog owner herself, Sarah particularly enjoys painting dogs, understanding the special place they hold in our hearts. “Most dog lovers will agree that dogs are like better versions of humans, but with furrier coats and waggy tails,” she smiles. “They radiate vast quantities of genuine character and personality, are fiercely loyal, and give us lots of unconditional love.

“A dog’s vibrant personality is what makes him/her so special, and it’s also what makes them such an integral part of the family. As dog owners, we want to create memories and take photos that perfectly capture our furry friend’s unique character. When I paint dog portraits, the most important thing is getting the look that you see in your dog as well as capturing the likeness.”

A second Artweeks artist who draws dog portraits and more describes how she first became a pet portrait artist but is increasingly inspired by the animals in the Oxfordshire countryside. “I grew up in Perthshire, just north of Edinburgh, with vast countryside all around me,” explains Oxford’s Charlotte Marlow. “I drew small, meticulous pictures. Then, with a wall to fill for an exhibition whilst I was still at school, I drew something bigger, one of the things I knew and loved best: a dog. He was an instant success and as a result I began to be commissioned to draw other people’s dogs as well, and I have never stopped! 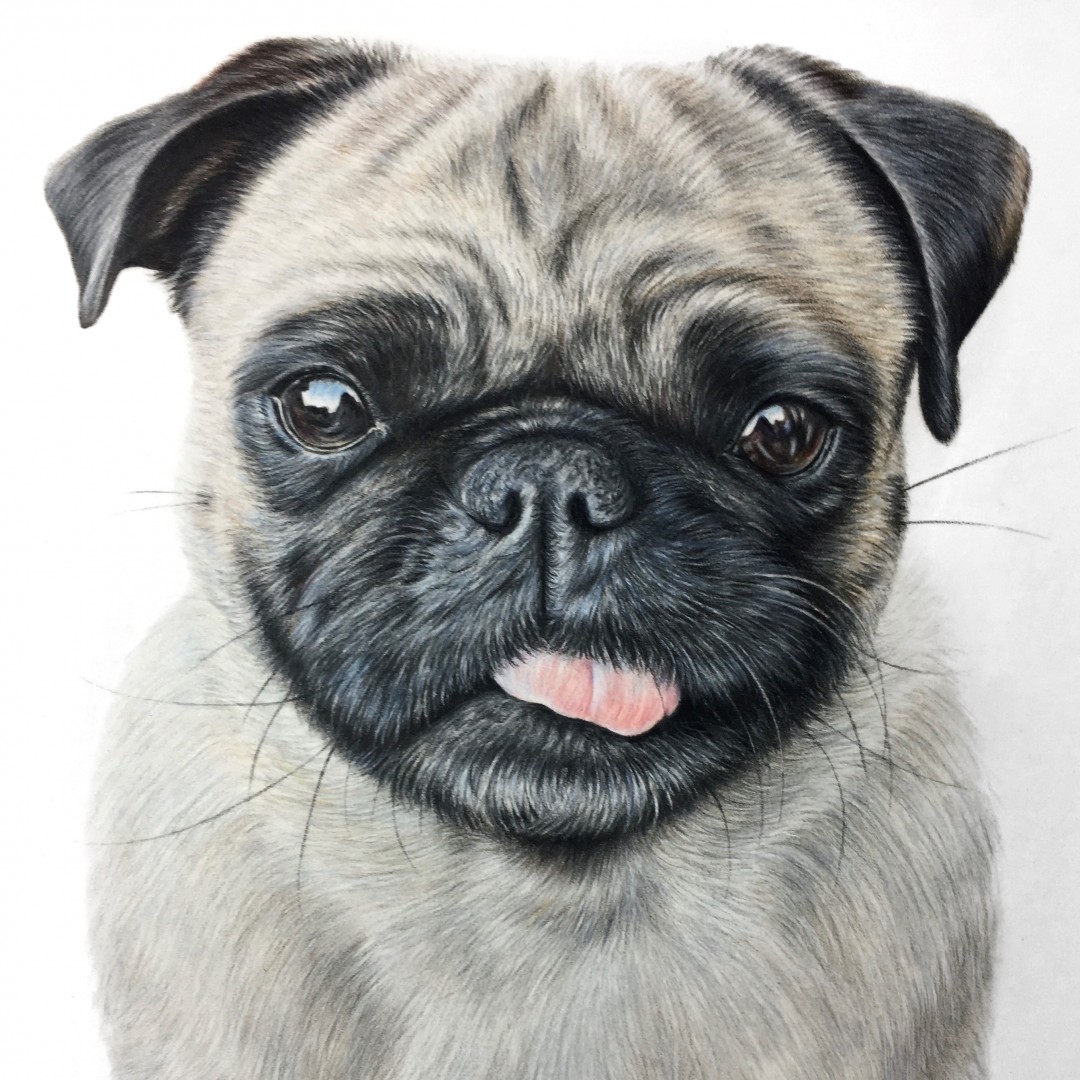 “I love the individuality of each, and their mannerisms and habits that are such a big part of their personalities. For instance, the first portrait I ever did was of a black Labrador who used to put her ears back, inside out, whenever she interacted with people. At first I planned to draw her picture-perfect, but quickly realised her eccentric ear activity was part of what made her so distinctive, and it was so important to capture that. Sometimes it’s the particular angle of the head when a dog is listening to you that’s so distinctive, and one of my more recent portraits shows a pug with her tongue sticking out because it catches on her wonky tooth whenever she’s excited, leaving her with this certain expression much of the time. And the eyes are so important. If I get the eyes wrong, it’s the wrong dog!

“I grew up with dogs – Springer and Cocker Spaniels – and now I’m in Oxford, I miss them! Drawing other people’s pets goes some way to filling the gap until I can have one of my own. Although I draw from photos, I prefer to meet the subject if I can, to better understand their personalities and their quirks and to see the colours in their coat. I use coloured pencils to draw them, on very textured, rather grainy paper which catches the light beautifully. The paper texture allows me to work with lots of layers until the surface appears smooth. These many layers add depth to the fur: shades of purple add warmth and life to brown fur tones and a black coat isn’t simply monochrome.

“I studied history of art here in Oxford before returning to Scotland as part of the team at Gladstone’s Land, National Trust for Scotland, on the Royal Mile in Edinburgh at which birds of prey were a regular attraction. The owls, eagles and falcons were majestic and it was awe-inspiring to work alongside them every day. And so, alongside a series of 400-year-old medicinal herb illustrations for the apothecary in the cellars at Falkland Palace and other NTS projects, I started to draw them too.

“I am increasingly interested in drawing wild animals: I love both the natural adornments of fur and feather and the wildness of spirit and raw power animals exhibit. For Artweeks I am showing a new series of drawings of species from the British countryside. The Red Kite, which at A2 is almost life-size, is a nod to their successful reintroduction in the Chilterns. The Badger is based on a particular individual that came snuffling under the mulberry trees in Wadham College late at night last year. As for the Kingfishers, they’re inspired by those that can be seen flitting along the River Cherwell by Christ Church Meadow. I have focused on animals from the British Isles because we can be very quick to look at the animals in other countries and see them as amazing and exotic and forget to appreciate, and sometimes protect, what we have in our own hedgerows. I believe we should manage the environment and the animals who inhabit it in a way that is as harmonious as possible, and through my artwork I hope to encourage others to appreciate our wildlife more.

“The pine marten, one of the rarest native mammals in this country, belongs to the ferret family. With a distinguished golden bib against brown-bear fur, it’s incredibly pretty and yet not to be underestimated as a phenomenal predator.”

A third artist, Gill Heaton, pairs both domestic and wild animals with people and to striking effect.

“I really enjoy the challenge of painting portraits of people as well as animals and birds, so I was inspired to find a way to combine the two using the strong bright colours that I love. I am fascinated by interesting faces that show strong character. The bird or animal in the pictures has been chosen to match the face and personality, and I was keen to show that the animals were equal to the person, working together, and not simply a pet or possession. 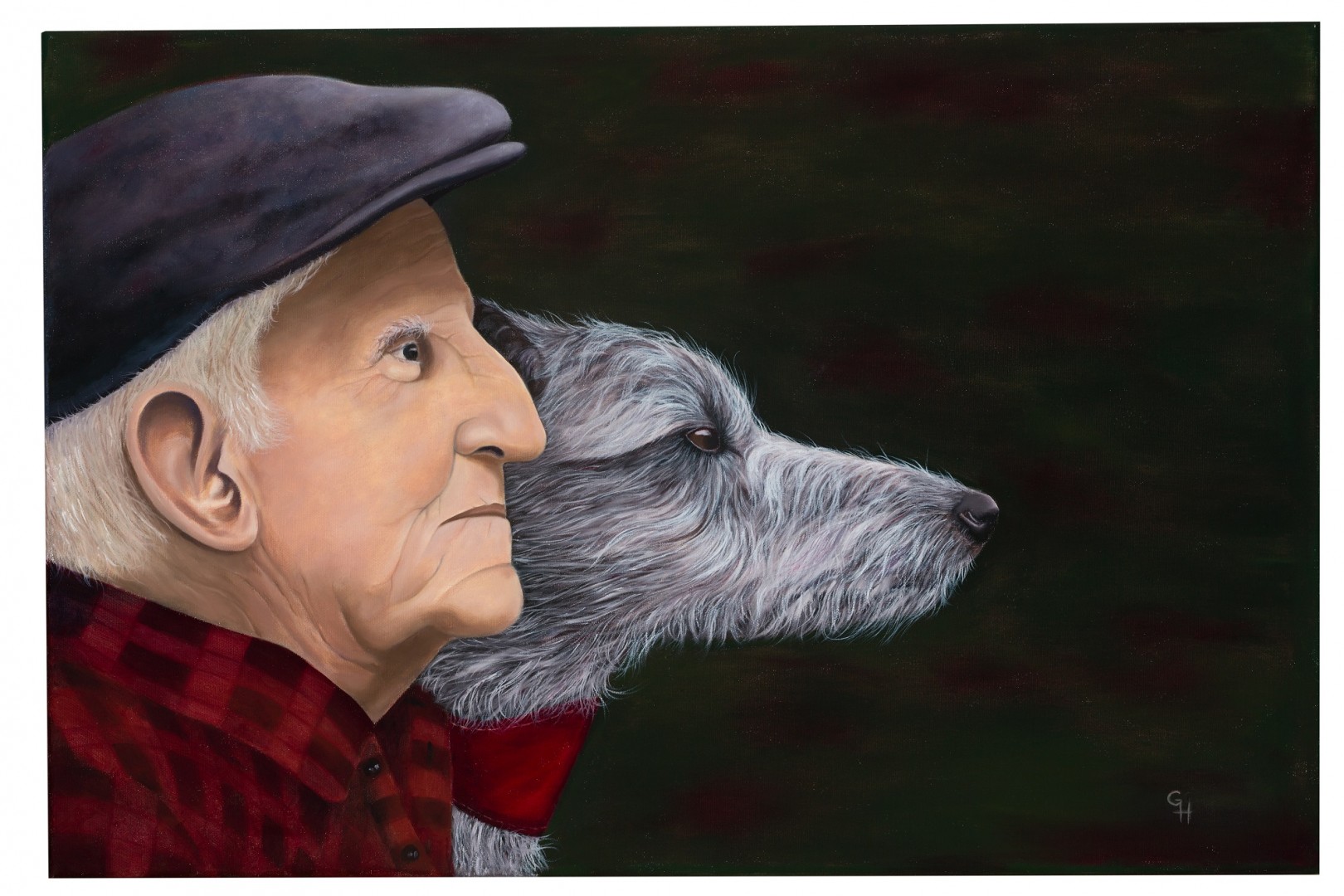 “My first was the painting ‘Partners – Golden Eagle’. In some parts of the world people hunt with eagles and I had seen a stunning film of this being done in Mongolia, yet I could imagine it as an old practice in Scotland. The strong gaze of both man and eagle in portrait worked well, standing out in profile against a simple background.

“After continuing the theme with some older faces, I chose a more youthful portrait for ‘Partners – The Kingfisher’ and chose the bird to match the mood and bright colour: it is also more fanciful and ambiguous as the woman might be a fisher of kings...

This year the annual Oxfordshire Artweeks festival (2-25 May) has been restricted by coronavirus to a virtual presence: visit artweeks.org and follow #oxfordshireartweeks on Instagram to enjoy the creative talent of hundreds of artists and designers.