Best of British: Inspired by Oxford

“Oxford is more recognisable for its stone and spires, but there is a wealth of other historic architecture and great modern buildings”

Esther Lafferty talks to artist Cathy Read, who is presenting a new series of Oxford paintings for Oxfordshire Artweeks, to find out more about her distinctive style of painting and what Oxford means to her. 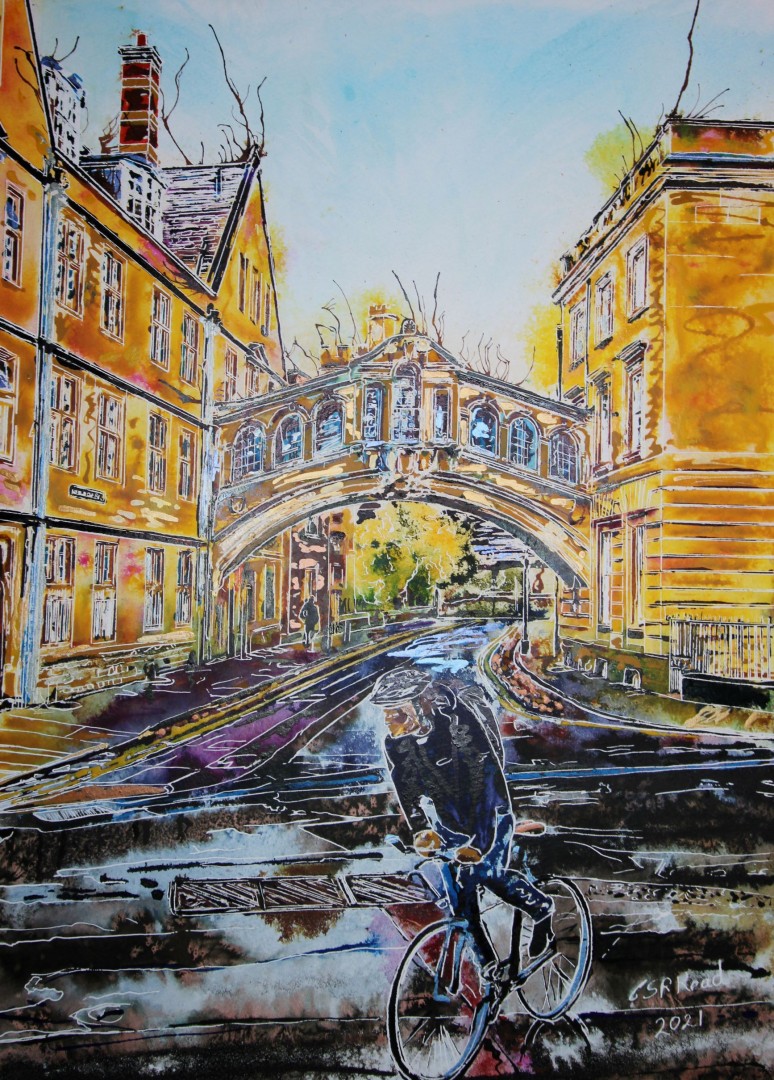 Cathy draws with masking fluid, outlining pencil-drawn buildings and architecture in a white liquid which protects paper from paint, before adding free-ranging watercolours and acrylic ink applied with a pipette. The precision of her lines combined with a relaxed fluid approach to colour gives painter Cathy Read a distinctive style. Her urban landscapes in a rich and cheerful palette showcase the beauty of architecture in today’s world.

“One thing I find fascinating about the urban landscape, whether in a classical city or an industrial setting, is the way it varies as you walk around. Cities never stand still and as one part dies back a new structure is built over the remains, so I’m inspired by both modern lines and gothic intrigue. However, the University dominates Oxford and although I have painted more modern buildings in the city, I have returned to the iconic views, consistently fascinated by their history.

Christ Church’s Tom Tower is well-known to anyone who has spent any time in the city, a sentinel standing guard at the entrance to the college on St Aldates. It’s one of Oxford’s most beautiful and ostentatious features,” says Cathy.

“I discovered an oddity when I was a student here, training to be an occupational therapist,” she continues. “You can hear a bell chiming 101 times at five past nine; marking 9pm Oxford time. The 5-minute discrepancy is a relic dating back to before 1848 when most towns had their own time. These variances were ironed out when Railway Time was officially adopted and aligned with Greenwich Time. Traditionally, the bell summoned the 101 students back to College before the gates closed, so they wouldn’t waste their evenings in revelry and mixing among the proletariat!” she grins.

In Cathy’s painting, you can see the opulent bell tower, designed by Cardinal Wolsey in 1532. She has included a hint of the blue clock dial at the central arch window apex.

“When Wolsey fell from power the building had wait for Sir Christopher Wren 150 years later to be completed,” explains Cathy. “Wren made a case for working in the late Gothic styles ‘to agree with the Founder’s work’. Arguably, it is too much: a visual overload. The eyes flit from detail to detail easily distracted from intense focus. At the angle I have chosen, Tom Tower’s distinctive shape is lost – yet the sense of awe remains in the colour-drenched stonework, leaded windows, and curling carved details. Golden stonework catches brilliant sunlight. A light casts dark shadows, defining the elegant carving enjoyed by centuries of noble – or more recently, ignoble – scholars. 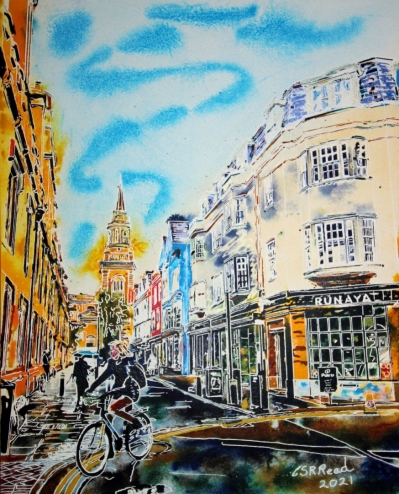 Cathy has also painted the Sheldonian Theatre, another landmark, both in its own unassailable splendour and with its glory reflected in puddles on Broad Street.

“The Theatre is at the heart of the University,” continue Cathy. “Imagine the graduations and performances it has hosted over 350 years. It’s a building that is at one with its environment and yet it’s still a showstopper in glorious golden stone; its classical details mirrored in the surrounding buildings. Being cylindrical in its appearance, the finished piece (Sheldonian Theatre Reflections) reminds me of a wedding cake: layers of floors, crowned with the decorative upper and that green copper dome centrepiece reminiscent of a mini lighthouse. I love the stone arches with half-round windows – each contains an ornate glass window that looks like black eyes peering under the stone curtain. Once you spot them, they are hard to unsee. I show the building in its entirety and partially reflected in the scattered puddles on the opposite pavement. It has been raining heavily but the sun has put in an appearance: a wet Oxford is especially beautiful in the sunlight. The scene is empty, no doubt due to the recent downpour, bar one small figure casually wandering past, rucksack on his back and hands in pockets; oblivious to his surroundings and the colours he leaves trailing behind. 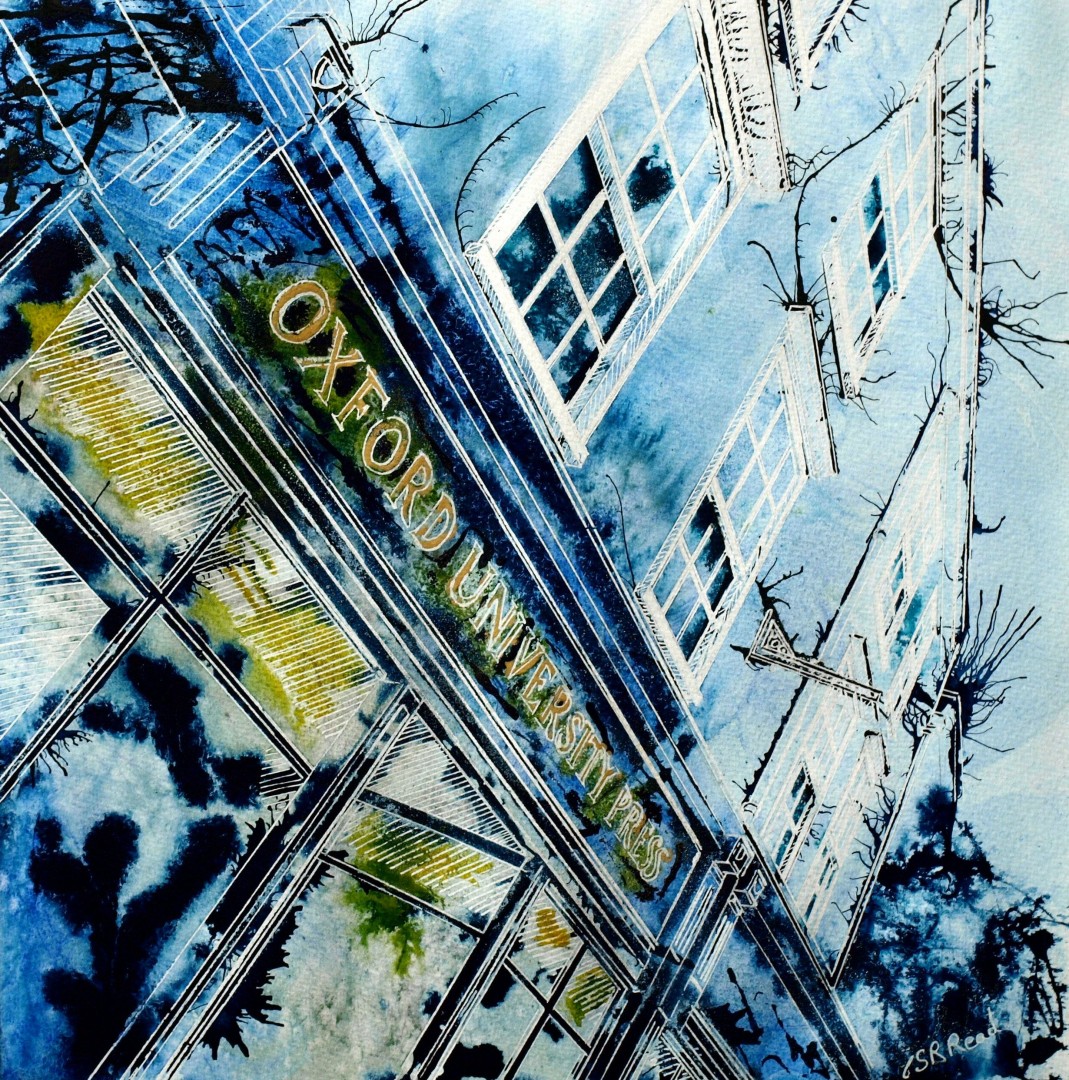 A third scene hints perhaps at the changing dynamic between Oxford’s regular and its student residents. “Standing here at the Turl and Market Street junction, a cyclist rounds the corner from Market Street. Turl Street is home to no less than three Oxford colleges. I wonder how many academics that amounts to per square metre?” she laughs. “On the left are Lincoln (home to one of the oldest working medieval kitchens in the UK) and Brasenose College. Behind, are Exeter to the left and Jesus College, founded by Elizabeth I, to the right. The spire of All Saints Church (now Lincoln College Library) is dead ahead. Brasenose College glows with golden tones defined by umber colours. The shops and cafes to the right are in red and cerulean blue contrast, highlighting the retail sector’s essential place in Oxford life – all students across every century have needed books, food, coffee, and drinks – and a bike cuts across the foreground.

I have also painted Hertford College on New College Lane with its curious little ‘Bridge of Sighs’, so named because of its resemblance to the famous structure in Venice (although it was never intended to be a replica). Although the College dates from the 13th century, the bridge is a relatively recent addition completed in 1914: it’s rather a novelty. I chose to add a cyclist”, continues Cathy, “and allowed the road surface to dominate this image. It is a scarred surface telling of roadworks, resurfacing, and general wear and tear. Against the care-worn roads the bridge and the 800-year-old building looks particularly majestic.

Oxford is more recognisable for its stone and spires, but there is a wealth of other historic architecture and great modern buildings, too, like Wolfson’s square blocks, St Catherine’ striking buildings in glass and concrete by the Danish architect Arne Jacobsen, and Keble College’s ‘Spaceship’.” Together they’re a brilliant overview of Oxford as a living city, the best in Britain!

From 7– 29 May, hundreds of artists open their studios to the public or host pop-up exhibitions in interesting spaces across Oxford and Oxfordshire. You can see Cathy’s art in Bicester (Artweeks venue 327) from 21 – 29 May, and visit artweeks.org to choose where else to visit.