Brushes in the Moonlight Hours

On show this month in the newly refurbished 17th-century Dolphin Gallery in the heart of historic Wantage, J C Clayton’s art is striking and stylish. Inspired by stained glass windows, he teams bold rich colours with a contemporary flair that draws on his career as a furniture designer and draughtsman.

“I am interested,” he says, “in the way the pre-Raphaelite movement saw no division between fine art and applied arts, producing everyday commercial designs for all, and the lines and shapes of art nouveau. And I am also influenced by graphic design, comics and illustrations.”

The influence of glass art and pre-Raphaelite paintings is clear in one of his most recent works, In Bloom, which sings with vibrant greens as a flame-haired beauty emerges from garden foliage that could be in the grounds of Kelmscott Manor, Morris’ ‘earthly paradise’. 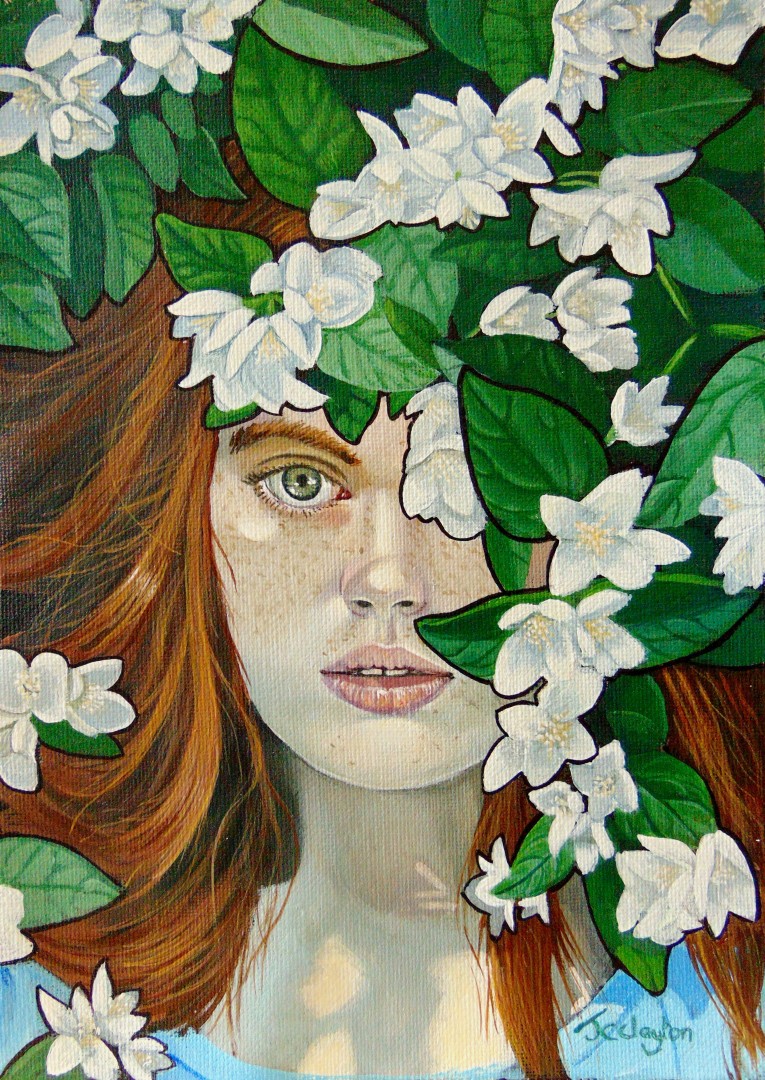 He paints in the moonlight hours when his daytime and family commitments have subsided, leaving him at peace with his brushes. His recent portrait series has an ethereal dreaminess which is perhaps unexpected given the heavy influence cloisonnism has had on him. Cloisonnism is a style of post-impressionism art, pioneered by French post-impressionists including Paul Gauguin and Emilé Bernard, in which bold and flat forms are separated by dark contours. The name is derived from the term cloisonné, the ancient technique of enamelling metalwork in which compartments created with wires were filled with powdered glass, and then fired to give a smooth rich and colourful effect.

For each of his paintings, Jamie begins with just five key colours, a deep blue classic ultramarine, the warm reddish-brown of raw umber, a cinnamon-toned yellow ochre, titanium white and mars black to which he adds occasional touches of sap green, cadmium red and cerulean blue hue. He uses the black as a thick line to frame sections of the landscape, figure or still life. These bold outlines, with differing line widths and weights to add depth, encourage the eye to focus on key elements of the picture and then the details within it.

“All the sections add up rather like elements of machinery to create the whole,” he explains. “I am always interested in how people, animals, machines, architecture or other objects fit into their environment and the connections between them. I am also often inspired by people and their activities, or current events.

“This year, for example, I have painted a moment from the Extinction Rebellion protests in Oxford and London just before lockdown happened. In stark contrast to the grimmer scenes of police and disruption, one off-shoot group of anonymous people and performers took a more theatrical approach to their peaceful protest. These ‘Red Rebels’ painted their faces a ghostly-white and wore scarlet red robes and headwear to signify the blood of species that have died as a result of climate change, as well as those that will die in the future. It was very emotive and so I tried to record and convey this more artistic side of the demonstration. 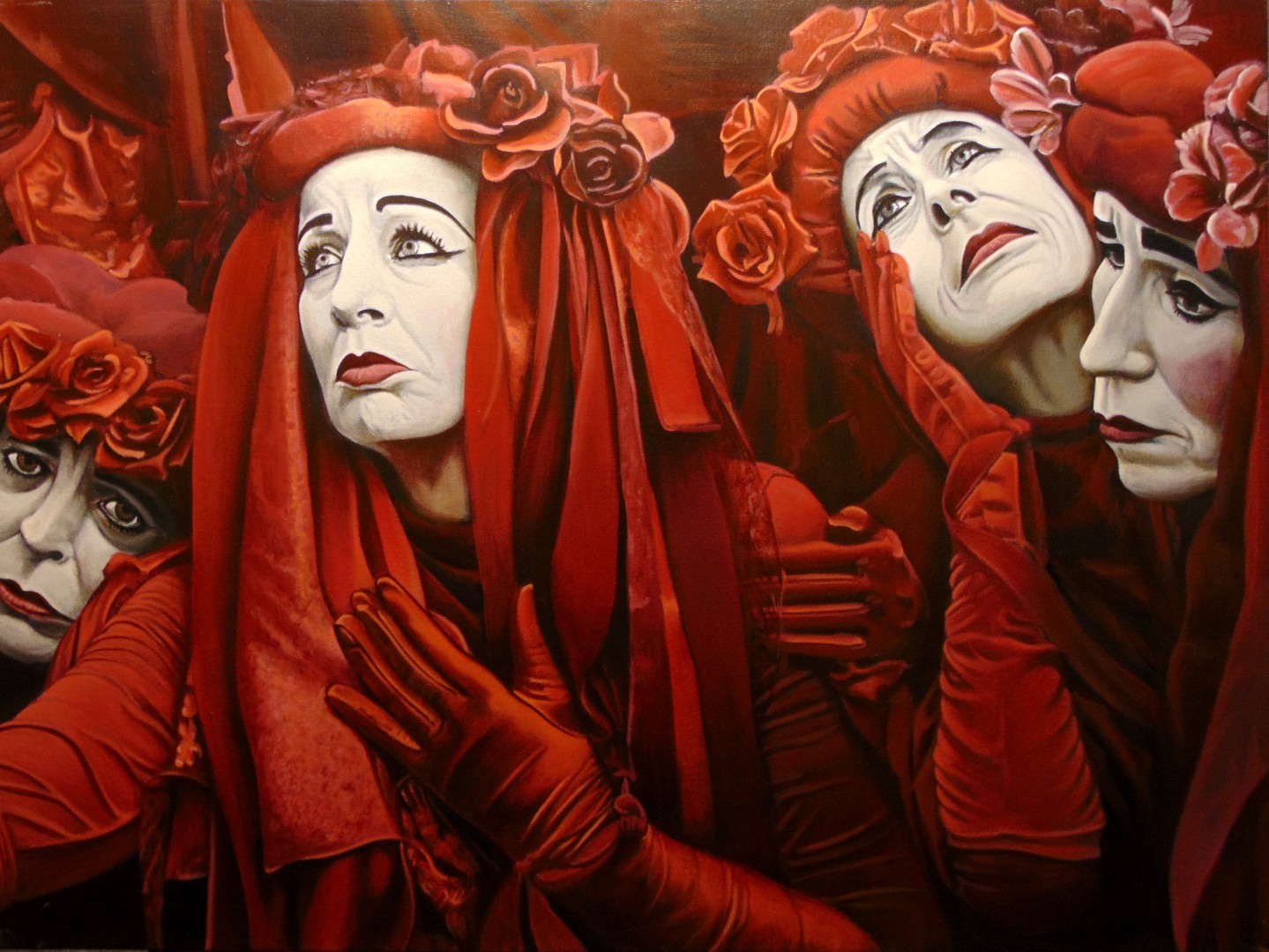 “Another of my recent paintings,” he says, “is a tin of Spam. I’m administrator on a very large Facebook art group and we get hit by a huge amount of spam. I discovered the use of the word Spam for this kind of internet nuisance came from a Monty Python sketch in which two customers in a café are looking at a menu where every option includes Spam. This leads to a silly song, ‘Spam, Spam, Spam, Spam… Lovely Spam! Wonderful Spam!’ Spam was, apparently, everywhere after World War II – you couldn’t get away from it. That’s how I felt about today’s spam when I was painting the picture!”

Previously, he painted photorealist pictures, and it was only in 2018 when he developed his new approach, his entry winning a Nature in the City competition to promote Oxford Swift City – a community initiative in conjunction with the RSPB to raise local awareness of the plight of the iconic bird whose numbers have declined by over 50 percent since the mid-1990s because of reduced space for nesting in buildings and diminishing insect populations for them to eat. Oxford’s swift population has been studied at Oxford University Museum of Natural History since 1946. The best-known book on the species, Swifts in a Tower (David Lack) drew its insights into swifts’ private lives from generations of birds above the city’s architecture, a skyline which J C Clayton sets against a bright blue sky in his Oxford scenes.

“This autumn I am working on a new series of bird and animal paintings,” he continues, “from the colourful yellow and green parakeets to the heron of Hyde Park, English Longhorn cows in Christ Church Meadow and deer from the Magdalen Deer Park – and traditional birds like guinea fowl and pheasants which you would once have found hanging in the Covered Market at this time of year.”

There are more animals too in The Dolphin Gallery this month, with a number of pieces by artist Cole Stirling. Born and raised in Zimbabwe, his passion for the wilds of Africa started at an early age. “Some of my earliest memories include waking up for early morning drives in Hwange National Park or sitting for hours at one of the numerous waterholes, to see what came to drink. I was in my element.” It is these animals, and his appreciation for the natural world, that Cole choses to depict in charcoal. “I have always been drawn to the nostalgia and simplicity of monochrome imagery, especially in photography, and feel that informed my approach to my artworks,” he explains. “Being colour-blind, this also comes in quite handy!”

To see more on these artists visit jcclayton.co.uk and colestirlingart.com. Art by both are on show at Dolphin Gallery, Market Place, Wantage this month. Visit dolphin-gallery.co.uk for more information.