From Fungi to Fish

You Are What You Eat

Steph Hicks is an artist based at the foot of the Chiltern Hills whose illustrations are intricate, colourful and playful. Her ideal day is spent foraging in the woods, cooking most of what she finds and drawing the rest. “I use pen and ink to highlight the beauty of all the plants, fungi and creatures that can be found on our doorstep. I use my art to share the joys of nature and the great outdoors. I label the more obscure fungi and plants so the viewer can share my enjoyment of their quirky names and learn more about them if they wish. I hope my work will inspire people of all ages to spend time enjoying and protecting our beautiful countryside and make them realise that there is so much that’s edible under their feet.

“I love foraging because it makes me slow down and really pay attention to what nature has to offer. Most of us dabble in foraging by picking blackberries, but there’s so much more around us that we easily miss. Once you start learning to identify wild foods it brings a whole new dimension to any time spent outdoors. It makes me wonder how on earth I managed to walk past all these amazing plants, berries and fungi for so many years without even spotting them. My favourite things to forage are fungi like oyster mushrooms, porcini and chanterelles. It took me three years to have the guts to try something I found and it was well worth the wait as they are delicious. This year I found about 1kg of porcini on every dog walk and I dread to think what that would have cost if I’d gone to Borough Market. There aren’t so many fungi around in June, but it’s a great month for elderflower, marsh samphire and edible flowers like cornflower and borage. My top tip with the latter is to freeze the flowers in ice cubes for a glamourous G&T.

“I always got over-excited by fungi,” she laughs. “It was a friend of mine who suggested I try painting the fungi which I spend hours looking for in the woods. The realisation that I could combine my love of foraging with my creative streak was the spark that got me drawing again, a long-lost pleasure, and a great way to further justify the hours I spend wandering in the woods.” 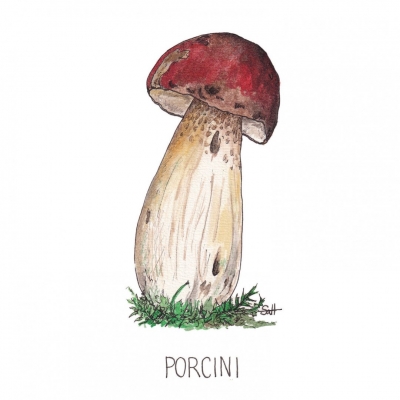 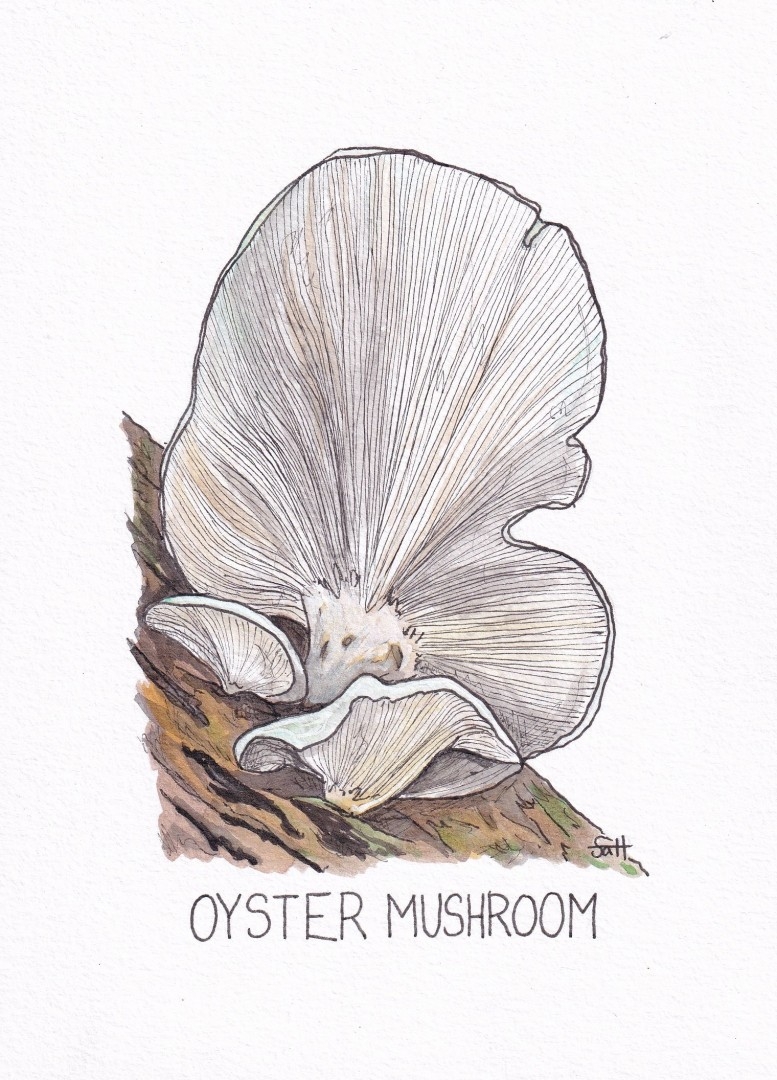 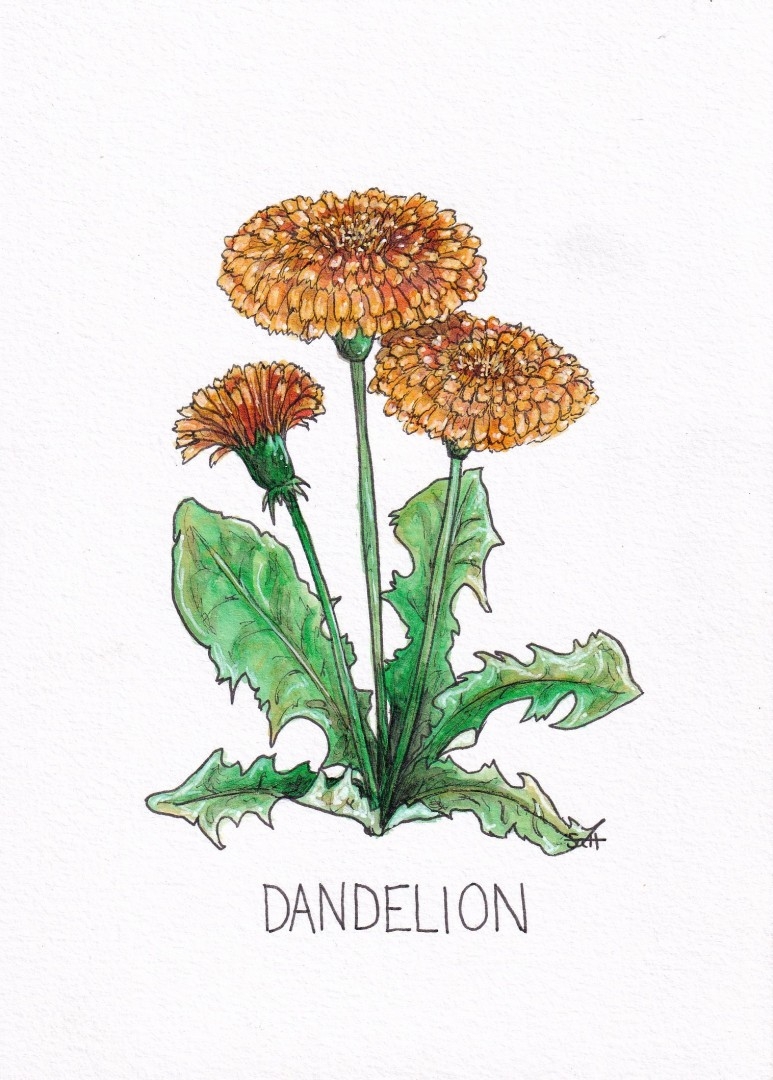 West Oxford’s Neil Butterfield, best known for his stylised landscapes and flattened perspective, is a second artist inspired by the food he eats and imagines, and laughs that the two processes he loves, painting and cooking, are not dissimilar. “Both are all about balance,” he smiles, “not too many ingredients and knowing just when to stop.” The still life pictures that combine his two passions are as rich in colour as the fresh ingredients he adds. They exude the vibrancy and flavour of Italy, Sicilian cuisine, bright succulent fruit and fish fresh from the sea, each a “holiday in a painting”. Neil imagines an Italian ‘nonna’ or grandma, Lucia, who grows her own veg and always has some passata on the go. From her window the sea glistens under Mediterranean sunshine. He paints her kitchen. “The great thing about Italian cuisine,” he says, “is the endless opportunities to paint tomatoes – gorgeous blobs of warm red.” 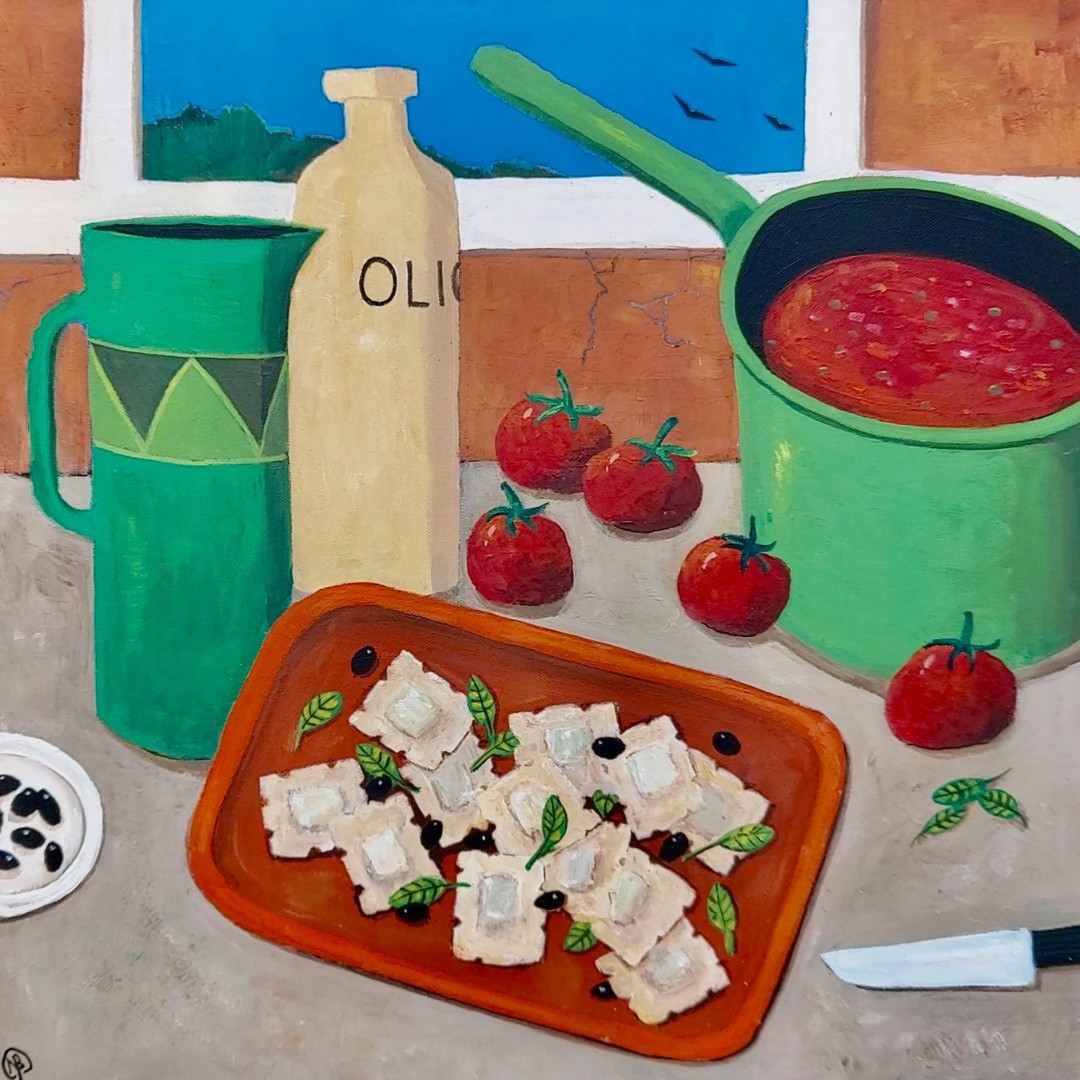 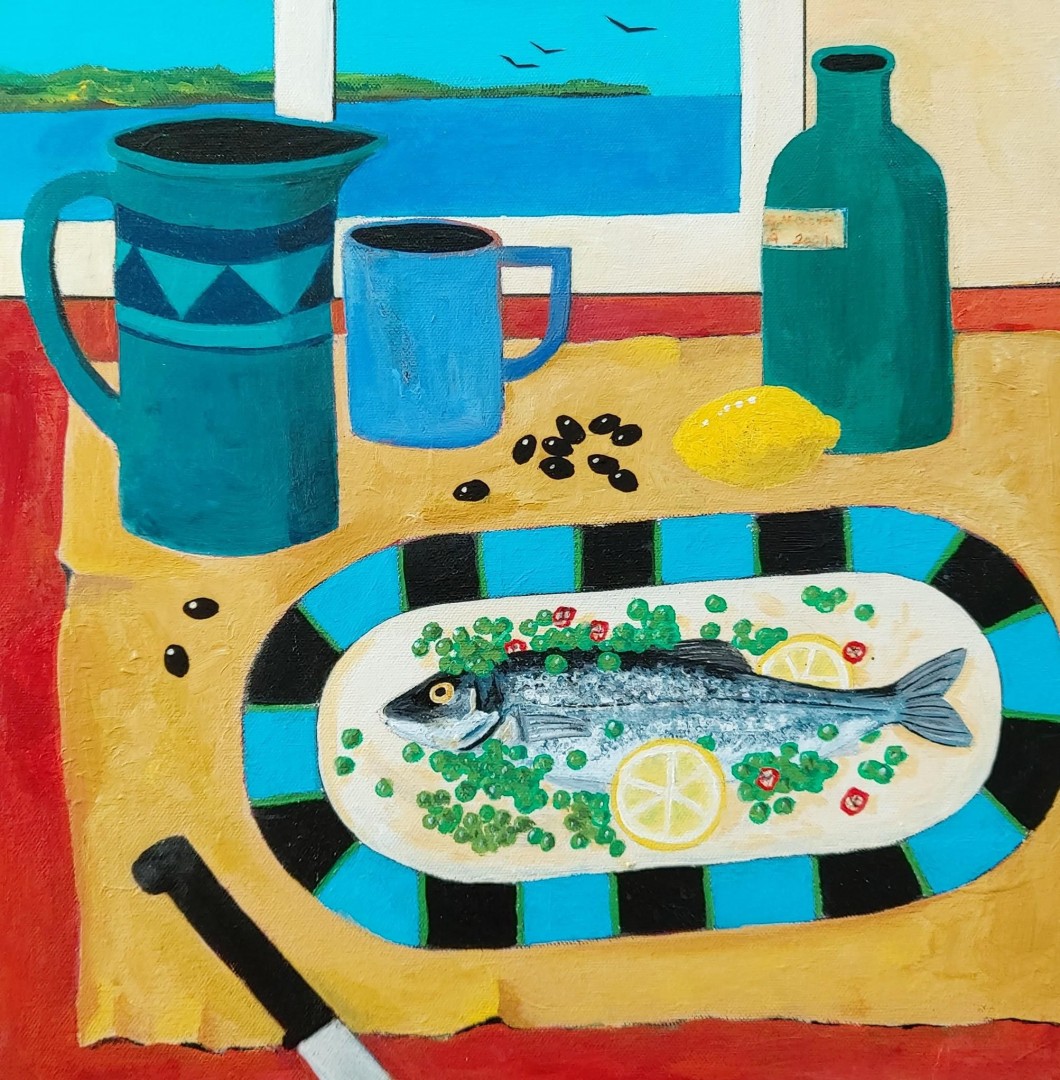 In contrast, Watlington printmaker Mark Lord work in striking black and white with a quirky distinctive style. Alongside ‘kitchenalia’, the geometry of the coffee maker, the shapes and forms of everyday and vintage items, he presents fish, stargazy pie and the Cornish pasty, celebrating his home county.

Mark is a photographer by profession who spent years looking through the lens at artisans, makers, artists and producers, fascinated by their hands, their tools and the creative process. This inspired him to put down the camera some of the time and step up to the workbench. He began lino-cutting, a printmaking technique in which the artist draws a design on the surface of a piece of linoleum by cutting it away with a chisel or knife before inking and printing from it. The chiselled areas appear as white lines on the paper.

From behind the lens, Mark has also followed the baking process in The Orange Bakery, Watlington in photographs, “and it’s that wholesome homely smell of bread just out of the oven, or freshly-ground coffee, that I am hoping to evoke with my linocuts.” The Orange Bakery itself is a business started by 15-year-old Kitty Tait in 2019, who raised funding via Kickstarter. It specialises in sourdough bread, freshly made pastries and cinnamon buns to die for. Their basic bread simply contains flour, water and salt, and a fourth ingredient: time. Each loaf takes over 24 hours from start to finished bake. Kitty is now a rising food star and Real Bread Campaign ambassador. 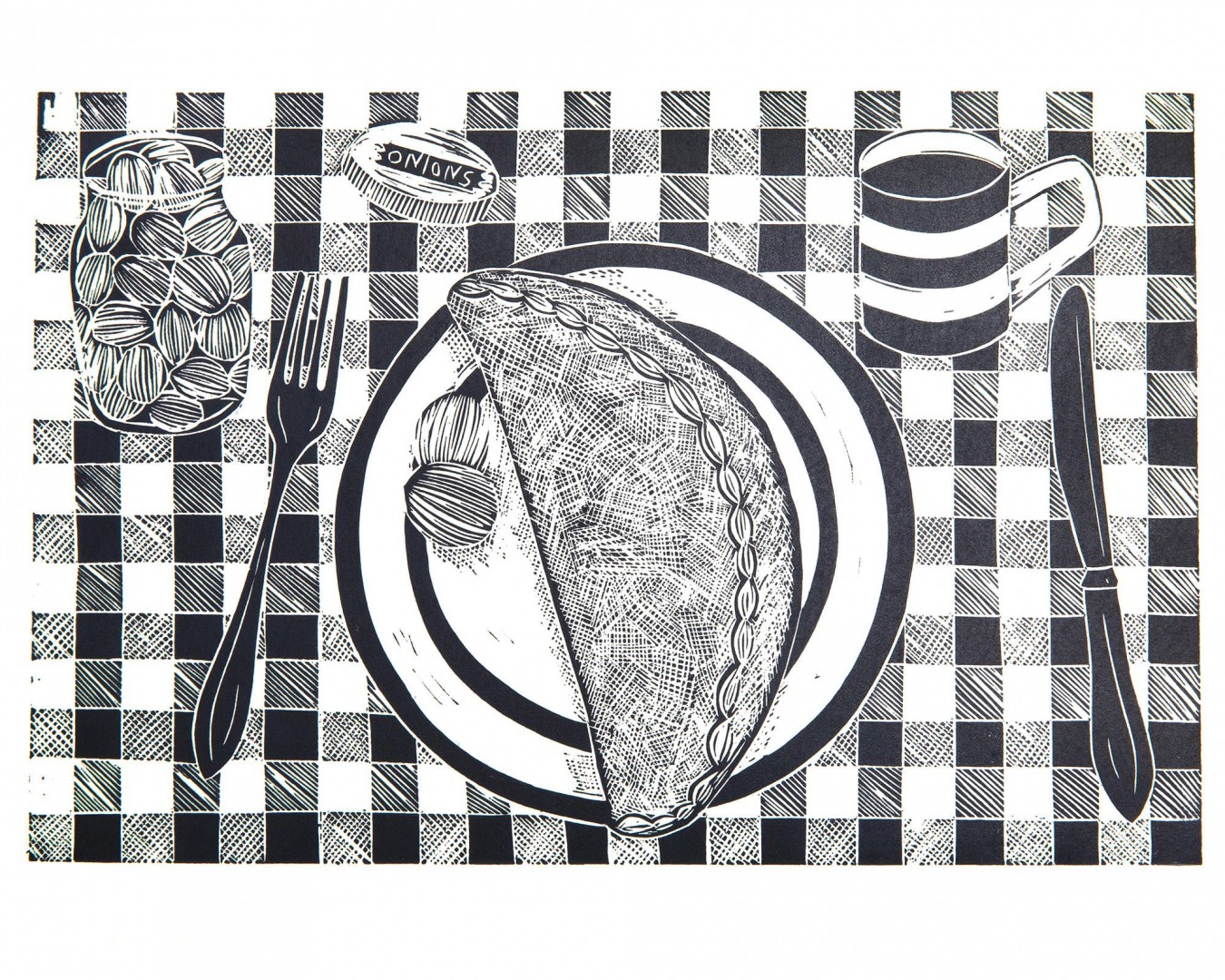 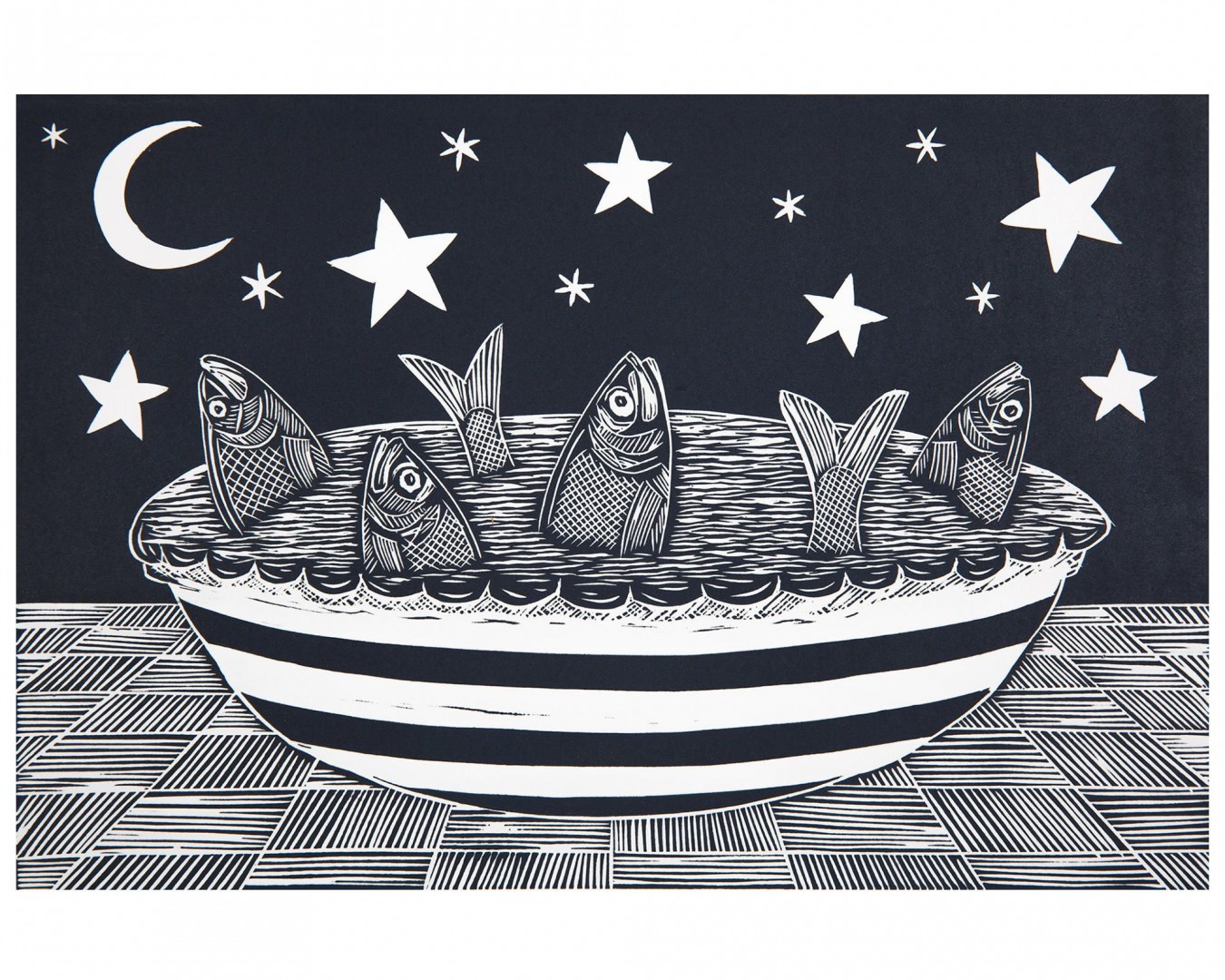 And the everyday meal has been captured in art by Cassington artist Kevin Hinton, in his latest series which includes salmon salad, fish and chips, and pizza. Having made over 1,000 daily sketches over nearly three years, Kevin began to produce larger, more involved pictures in pen, ink and coloured pencil. In a previous spring, he had spent a month drawing little sketches of plates of food every day for ‘What I have been eating?’ He decided to develop this idea, putting nutritional information round the edges to add an extra dimension. Having previously sketched an A-Z of letters from well-known food and drink brands, he has also created a heartfelt ransom note from the letters on chocolate wrappers. “Some pretty strenuous research was needed for that piece,” he chuckles. 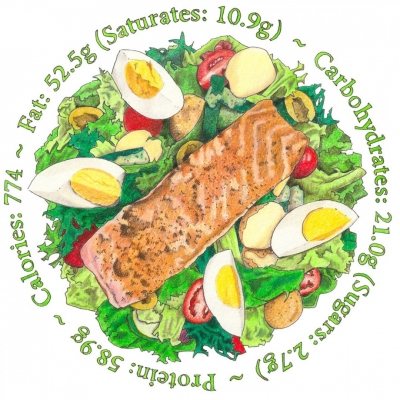 You can see more on all four of these artists at artweeks.org