“Meat is a cheat sheet”

How long have you both been vegan and what inspired the lifestyle change?

I: We’ve both been vegan around and about six-and-a-half years and the trigger was a documentary called Cowspiracy [Netflix]. We both watched that within a month of each other and it really opened our eyes to just how bad animal agriculture on mass can be for the planet, your health, and obviously for the animals themselves.

That’s what made me go veggie!

I: That documentary is probably one of the most important and effective documentary films of all time, I’ve lost count of how many people it’s directly affected; it’s completely and fundamentally changed the way many people live their lives and there can’t be many documentaries that have done that.

Can you tell us about BOSH on a Budget?

Do you think there’s a reason people think that?

H: Essentially, to eat a well-planned diet, you need information which is not readily available to everyone. Meat is a cheat sheet for getting nutrients – getting them from a plant-based diet is pretty straight forward but you do need to be eating a varied diet that doesn't really look like what we eat in this country. It’s not the standard western diet; it’s what we would describe as ‘eating the rainbow’. This stuff isn’t difficult to learn, but it’s certainly not what we’re brought up to know. People have this misconception that a vegan diet is limited because meats are a fast-track, so, therefore, people try to directly replace it with substitutes which are flying off the shelves at the moment. We think it’s great that they are available, but they are expensive! I think it’s all those products that are giving people the feeling that vegan food is expensive as well as the idea that we need supplements as well – it’s not true. A broad, beautiful diet full of fruit and veg will see you right.

I: When we first went vegan, I noticed that my skin got clearer, my hair got thicker, I had better clarity of mind and I was sleeping better. There was a whole host of physical benefits that I was not expecting but the main one was the weight loss that came along with it – that was fantastic because I was definitely carrying a little bit too much at the time. 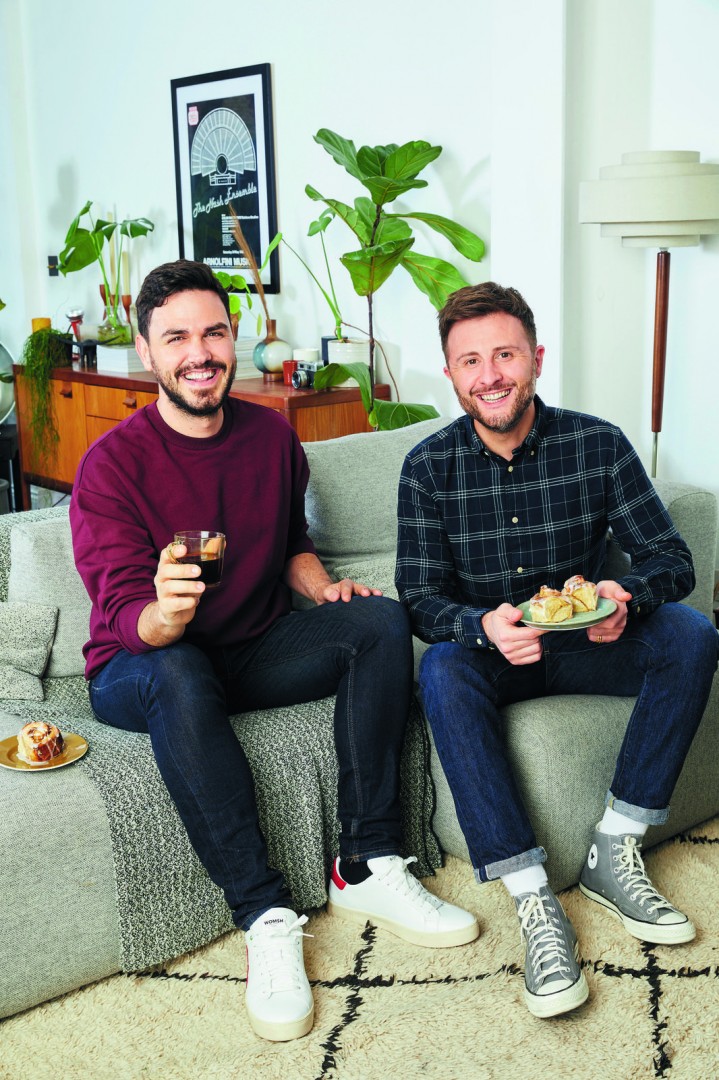 You guys must have started being vegan at a time where you go to a restaurant and there’s nothing you can have on the menu – it was like, salad or chips.

H: Yeah, that’s it, isn't it? It’s salad or chips but the chips are cooked in the same fryer as the burgers. Do you know what’s funny? We’ve been working together on BOSH! for the last five years and as we have been writing, it’s been really important that our ingredients and recipes are available to everyone, so we've had to adjust the complexity of ingredients in every single book. In the beginning, we couldn't use jackfruit, we couldn't use banana blossom, and we couldn't really justify using nutritional yeast either because it just wasn't something people knew about. By the time we wrote our second book, however, all this stuff started to become more available. Now, we can almost make any meaty dish we want. We're still a little bit behind on vegan fish products but there’s some cool stuff being worked on.

Do you have a favourite vegan chain or a place that does really good vegan food?

I: For London, Club Mexicana on Carnaby street is a fantastic vegan street food business. They’ve just opened a restaurant there. Great food, great burritos, great tacos, and they also have these wonderful jackfruit ribs which are delicious.

H: We just found this really cool pub called the Punter, in Oxford. We’ve been there a couple of times – it's dog-friendly which is lovely, and the food is tasty. It’s not all vegan it's veggie and vegan but I think the whole pub is veggie.  I'm looking forward to when there are more options available in and around Oxford, but then the chains that are there now have good options, Wagamama, in particular, smashes it with their vegan offering right now and also  Banana Tree – so lots of options.

What would you say are your number one  cupboard  staples that help with vegan cooking?

I: Nutritional yeast is a wonderful thing to have as it’s packed full of B12. It gives a nice cheesy flavour, and you can sprinkle it on basically everything even beans on toast.

H: I would always say having the ingredients for a quick Bolognese: onions, garlic, tinned tomatoes or passata, lentils or even TVP – textured vegetable protein – which we want to bring back. You can whip up so many things all with just this handful of ingredients and we have a recipe that’s flexible like that in Bosh on a Budget.

You’ve worked with quite a few famous faces. Who would be your dream kitchen guest?

I: I would say Leonardo DiCaprio because he is all about the environment and uses his platform to put across good messages and people listen to what he has to say because he is a massive Hollywood superstar. For us to reach loads of people with our tasty, planet-friendly vegan food by getting a slot on his Instagram would be a very good thing.

H: I’ll go for Lewis Hamilton. That would be fun, right? He's veggie, we could meet him, hang out at the Grand Prix, cook some food for him and maybe cover him in Champagne when he wins.

Following the book release, what’s next for you guys?

H: We have an ongoing project filming videos to make people learn how to cook vegan food so writing recipes and shooting videos is our project. We’re going to be doing a lot more of that in 2022 now that lockdown has passed. Probably the thing we are most excited about at the moment is that people are loving our food in supermarkets now. We have ready meals in Morrison’s now at £4 a portion, as well as BOSH! cakes, flavours or sauces which you can find in most major supermarkets, so we are chuffed with that.

Finally, what are you both optimistic about for 2022?

I: That is a lovely question. I am optimistic because (touch wood) it seems we are out of the woods when it comes to Covid so it’s nice that people will be able to travel again and see their loved ones. I'm optimistic about that.

H: I am slightly optimistic about climate change. It’s still really bad and we as species are not doing a great job protecting our home, but the fact that more people are eating plant-based foods and more people are making the link between diet and climate is really promising. They were talking about it at COP26 which is progress. Politicians haven't made that link before so I'm optimistic that that means change is happening – the problem is that it's slow but hopefully we will pick up the pace soon.

Bosh! On a Budget Is Available Now.