“get off your arse and make it happen”

Can you tell us a little bit about your new book and what kind of reader it’s aimed towards?

After my first book, What A Flanker a lot of people – mainly teammates – came up to me slightly sweating, being like, ‘you haven't put that story in there have you?’ and I was like ‘no, but I will if I make another book’. I made notes on my phone and realised I had about 20 extra stories that I’d left out, so I decided to put them on paper, this time in more of a self-reflective way.

I interviewed my wife,  Eddie Jones (my England coach), my best friend, and my former teammates to tell me whether I was talking sh*t or not – they were brilliant. It’s not meant to be overly deep, but it’s meant to be humorous. It’s for my kind of audience – people who like to have a laugh. You don't have to know anything about rugby to like it. I can imagine it’s going to raise a few eyebrows, but in 2021 everyone is perpetually offended, so if you think I'm a d*ck already, read it to confirm it. If you don't think I’m a d*ck, read it anyway. 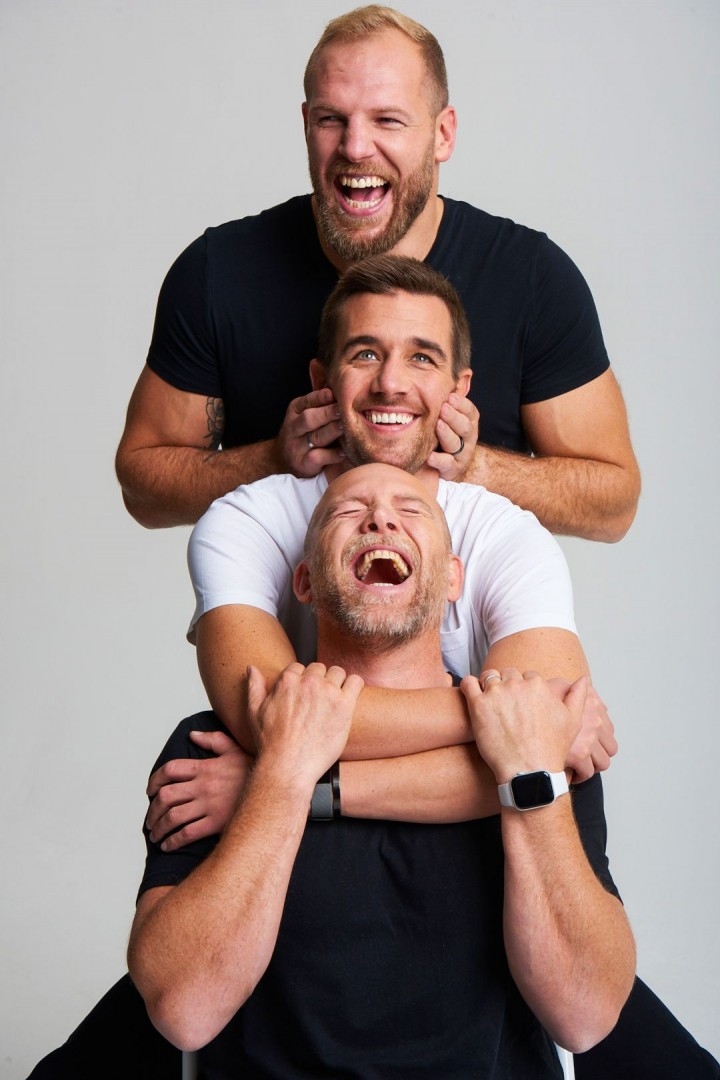 James Haskell (top) with The Good, The Bad & The Rugby podcast co-hosts Alex Payne (middle) and Mike Tindall, preparing for their live tour coming to Oxford in May.

Quite a broad audience then…?

What made you decide to make this one a little more reflective?

It’s meant to be a funny book in terms of these journeys, but by accident, it does go deeper. I make some observations on society; what’s happening, what we are trying to do and everything else.

The theme for our January issue is optimism with special attention paid to mental health. What do you think is the most important thing – for men in particular – to keep in mind when considering their mental health?

I think the way to look at it is quite simple: if I told you to buy a pair of trainers that would make you run faster or I was going to give you some pills that were going to make you slimmer, you'd do it. If I told you to change your entire life – how you deal with success, failure, confidence, relationships and all this kind of thing – by reaching out and talking to someone, a lot of people wouldn’t do it. They don't use their biggest tool. You wouldn't try to write a book on a typewriter, so you shouldn't try to run your life on a brain that hasn't tried to expand, develop, or grow.

The idea I’m getting at is that speaking out gives you a tool and you need to use it. I know a lot of men think that their problems are things like putting food on the table, money struggles, that kind of thing, but actually, if they were happier, calmer, more structured and more aware, they would be better performers and life would be much easier to manage.

Coming from a career that is often associated with masculinity, do you feel that you have suffered from the pressures of toxic masculinity?

No. I think being a man is a good thing*. Being a powerful man is a good thing and I think it's lazy to bring gender into certain situations. We seem to be getting stuck, trying to enforce our individual views on life onto everyone else and what that does is browbeat people. Trying to make men different in order to help women who have suffered is not the way to do it. You can't break someone down to build someone else back up again.

There are a lot of things that need to be addressed but we are going about it the wrong way. The idea is that we’re supposed to be good people and learn to get better, but you can't smash me down because I don't see life the same as you. I said when I was in the jungle that women should go first, and I came out to people telling me that actually, chivalry is not telling women where to go it’s letting them decide themselves. Hold on a minute, why is this so complicated? I’ve been from a completely male-dominated environment my entire life. I went from an all-boys boarding school to an all-boys rugby environment. This is what social media doesn’t consider – how am I, and the context of my life supposed to match up with someone that is very liberal and from a hugely feminist background?

*[Editor’s note: toxic masculinity in fact refers to the pressure on men to conform to certain, sometimes harmful, societal norms traditionally associated with masculinity such as stoicism, aggression and emotional inhibition].

It’s completely inhibited it. Where we used to disagree and get on with it, we now try to oppress and destroy people because they don't take on our views. We are human, everyone makes mistakes and by trying to hold ourselves to this impossible standard, we are going to get in trouble. I think one of the boldest and best moves in this area recently came from Netflix; instead of taking down a series that caused complaints, they instead said, ‘some content on our channel will offend some people.’ That’s exactly what we want. Why are we allowing people who don't have a clue about anything to make or force political decisions? Why – when someone does an advert now – does it cause massive offence and we have to fire them and cancel them? Why are we looking back through ten thousand tweets to find something bad on someone? These people should be banned from the internet.

Ok. (I swiftly decide to move the conversation on)

January marks  Veganuary and I understand that you have dabbled in plant-based diets before – will you getting involved this year?

I didn't go all vegan I just tried some vegan meals because the best diet for you is animal proteins with a high plant-based diet. There is a massive increase in people developing dietary problems, issues and illnesses through taking it to the extreme and whatever diet you choose to do, look into it, do some research, get your blood tested and see if it's right for you. I also think if you’re doing it [veganism] to save the planet, to stop animals being killed, then fine. If you’re doing it to be healthier though, you’re mental. It’s not, but that’s what you’re being sold. I will certainly never be going fully vegan.

Since retirement from sport, you’ve explored a lot of different avenues; what would you say is next for you now that this book is out?

My next house music track came out in December, and I’ve got a live tour with my podcast – the Good, the Bad and the Rugby – which will start in March, so we are selling tickets at the moment. It will be a 14-day tour around the country which will be mega. I’ve got another book coming out in 2022 as well so I’m as busy as ever.

What are you optimistic about for 2022?

I’m optimistic that if I only worry about what I can control then everything will be good. If you get that nailed, then the world is your oyster. Hopefully, we are also going to start a family and move house so there’s lots to be optimistic about. It’s only exciting though if you get off your arse and make it happen because no one else will make it happen for you.

James Haskell’s new book Ruck Me, I’ve Written Another Book, is out now.

Catch James Haskell with The Good, The Bad & The Rugby – LIVE at Oxford New Theatre on Sunday, May 22. Tickets available now from www.cuffeandtaylor.com