“In Oxford we'd just pack people in. Everyone just lapped up this Great Gatsby-meets-techno rave stuff”

Oxford is world-famous for continually producing forward-thinking, innovative music, but few of our city’s musical exports are as sonically ambitious as Dutty Moonshine. Having grown up around jazz and swing music and acquired an affinity for full-force, uncompromising dance music as a teenager, frontman and band founder Michael Rack developed Dutty Moonshine from a two-piece production outfit to a full 14-piece big band.

Now a regular favourite on the festival circuit, the Dutty Moonshine Big Band combines the energetic, irresistible sonics of swing and jazz records from the thirties with the high-tech beats and bass of today. Here, Michael talks to Jack Rayner about token vintage samples, Oxford’s musical legacy, and why you can’t call it ‘electro swing’.

How does a man end up fronting a 14-piece big band?

Well, Dutty Moonshine was a DJ outfit to start with, and we used a lot of jazz and swing samples. To me, the natural step was always to do what the greats like Duke Ellington and Benny Goodman did, and that’s to lead an actual big band. Why not perform this music with live musicians rather than samples?

Well, technically Reading, but Oxford’s where I turned into an adult, if you like, and most of the band are from Oxford. I cut my teeth in Oxford’s small clubs.

How did Oxford inform your style at the time?

I guess the naff answer to that is that so many generations of fantastic musicians have come out of Oxford – if you live in a city where you know greatness comes from, it inspires you to be better. That’s my cheesy answer, anyway. Alongside that, it’s the versatility of people’s attitudes in Oxford. People’s minds are – or were – so open. We used to do massive events at The Regal – did you ever go to The Regal?

We used to run massive, 1,500-capacity events there, doing exactly the same kind of music we do now. We did a few parties in Reading but could never get past 500 people, but in Oxford we’d just pack people in. Everyone just lapped up this Great Gatsby-meets-techno rave stuff. Oxford gave me a receptive platform to test out my ideas.

Did you grow up with jazz and swing music, or is it something you picked up from elsewhere?

My dad was always into jazz and swing. He never pushed it on to me hard, but when he was in control of the CD player he’d put on some Django Reinhardt and the sound of jazz was always in the home. As I became a teenager and started going out, I discovered free parties, squat raves and warehouse parties, which of course got me into all sorts of dirty dance music. Then, it was always in the back of mind to bring those two worlds together.

It seems like a very organic process – it’s not like you discovered electro swing then jumped on the bandwagon.

Absolutely. I also started doing it before the name ‘electro swing’ was even coined. Obviously people like Caravan Palace were doing something similar before, and when I heard the term ‘electro swing’ for the first time it just made me think, ‘Oh, I’m doing something like that.’ The band now is certainly not electro swing. Not by a long way. I don’t know what you’d call us now – ‘big band and bass’, perhaps. It’s too loud, too raucous, too energetic and too punk to be called electro swing.

What do you think of how the electro swing scene has developed? I feel like some elements have become rather gimmicky.

Oh, it’s awful. I did love it years ago, but it just became more and more watered-down, and I felt like more and more club nights and DJs were trying to copy each other’s stuff, so what you’ve ended up with is this uniform sound that’s naff, cheesy and – as you said – gimmicky. I hate it. If you look at some of the previous mixtapes I’ve done as Dutty Moonshine, all of them are little digs at the scene and I’m often taking the piss. It’s all tongue-in-cheek and I never mention anyone directly, but, for example, one of the mixtapes is called ‘Token Vintage Sample’. Having said that, if you look at the top 10 or 15 acts in the world doing this genre, not a single one of them sound the same. Caravan Palace, Smokey Joe & The Kid, Mr B The Gentleman Rhymer, The Correspondents, Chinese Man... None of them sound the same, but 95% of all the other acts just sound like watered-down versions of Parov Stelar.

How does the creative challenge differ from producing tracks on your own to arranging pieces for the band?

It was a steep learning curve, that’s for sure. I think at the very start we sounded pretty bad, on reflection. We didn’t quite understand how to make all the sounds work together or how to make the most of the arrangements. It wasn’t until our second year when we brought in a band member called DJ Binge, who is a classically trained studio engineer, that everything started to fall in place. That’s when we started to understand how to get the best out of our sound – before, everything sounded muddy and we were overfilling the frequency field with too many sounds. It turned into a complete mess and sometimes when we were playing a song together I’d just think, ‘That sounds like arse.’ It was just a cacophony. So, the biggest thing we’ve learned is how to create space. When you’ve got 14 instruments and electronic beats, the trick is in creating space in the mix. It’s something you don’t have to think about when you’re producing a track on your own and you’re just hitting MIDI notes and plonking around on some software.

Where do you go from here? What’s your ambition for the band?

I’ll let you in on some secret news: we’re going for an Official Album Chart position in November 2019. We looked at the sales we did on our recent Kickstarter campaign and other sales numbers, and with a bit of clever marketing and if we could’ve grouped the sales into one week, we wouldn’t have been far off getting into the Top 40 last time round. For the album, we’re pulling in a million favours from artists, who unfortunately I can’t name right now.

Yeah, guest artists. We’ve got grime artists, blues artists, and all sorts. We’ve got a really wide variety of genres. It’s going to be interesting. Ocean Wisdom did a similar independent campaign, and his was good, but I think I can do it better. I’m a bit of a hustler, a bit of a blagger.

Ultimately, this is still a business. We can all mess around being rock ‘n’ roll backstage, off our heads on drugs and booze, but ultimately I’ve got 14 people in the band, we’ve got tech crews, managers... There’s a lot of people there relying on a certain amount of money, so I have to treat it like a business.

Was it difficult to get promoters and venues to take the risk on such a logistically large band, back in the day?

Yep. In the first year I lost thousands, because I just banked on pulling it off. We priced ourselves super-cheap for that first year, but because of that we managed to get some cracking slots. For example, for what was our second ever show, we went onstage at Glastonbury straight after the Radio 1 takeover with Andy C. We were very lucky to be given those sorts of big platforms early on.

The Dutty Moonshine Big Band appear at the Oxford O2 Academy on 9 November. 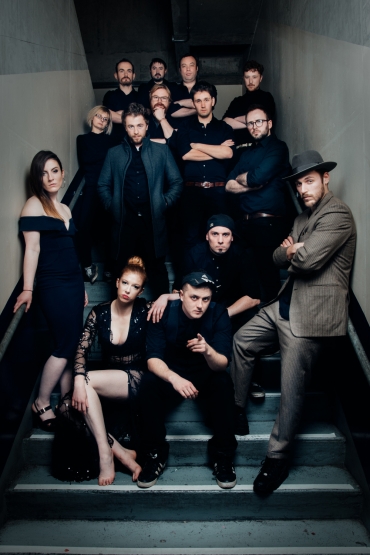