‘These Songs Are Alright'

“To be able to say, ‘This is my album, I made this’ is the best feeling I’ve ever had”

Meeting Michael Ball could have gone smoother. Trying to be organised, I joined the Zoom link three minutes prior to my allocated time, unwittingly interrupting another interview he was giving. “Sam,” he says, when my 20 minutes begins, “gatecrashing other interviews…” I apologise, thankful we’re not doing a livestream. “That’s cool, mate,” he says from his dressing room at The One Show, “don’t worry.” It’s the Tuesday after Mother’s Day, for which he sent his mum flowers, and “she got them, so I was alright!” I admit the card I gave my mother was actually one my housemate bought but decided not to give his, owing to its too-slushy poem. I sent bubbly too, I reason, and did confess to what I’d done inside the card. “Why?” the singer asks. To make me feel better, I say. “Oh ok, it’s all about you…”

Of course, he couldn’t be with his mum, couldn’t hug her, and it’s over a year now since he saw his dad. “It’s really hard, because they’re both 87, and I want to give them a hug. So, God willing, I’ll be able to do it soon.”

I remark that the past year seems to have flown by in an odd way. “I know exactly what you mean. It’s like every day has dragged and then suddenly it’s a year. Groundhog Day.” This time in 2020, Micheal Ball was gearing up for Hairspray, reprising his Edna Turnblad, the agoraphobic mother of Tracy. “We’d done two days of rehearsal, and I said, ‘No, we’re stopping, we’re not going to do this. We’re not going to be in a room, with me singing “Mama, I’m a Big Girl Now”, with a load of kids. We’ve all travelled from all over, there’s a pandemic. We’re putting ourselves at risk, our families at risk, let’s shut it down.’ Hard decision, but obviously the right decision, and now we’re about to start it again.”

Indeed, Hairspray is due to open at London Coliseum in June, also starring Marisha Wallace. He first met the recording artist and star of Dreamgirls at Lytham Festival, during the musical theatre concert that closed the five-day event. He’d just arrived and heard Wallace’s “incredible” rendition of ‘And I Am Telling You…’ from backstage. When she came off, he told her she’d be perfect for the role of Motormouth Maybelle, a part she very much wanted to do too. “So, I’m thrilled,” he says. “Can you imagine what she’s going to sound like singing ‘I Know Where I've Been’? It pisses me off actually,” he adds jokingly, for she’s going to steal the show, and he’d rather do that himself.

He first played Edna over a decade ago. It was a part he really wanted and “did a proper audition” for, which he’d not done since starting out in show business. He knew people wouldn’t think of him for the job, he says, just as they didn’t think of him for Sweeney Todd (he ended up winning an Olivier Award for both). “I guess people have preconceptions of who you are and what you can do,” he says, then recounting the Hairspray audition. “I went and stood outside the room with all the other people waiting to go up – for other roles as well – people I’d worked with back in the day. I wanted to be seen and I wanted to get it on merit. And I have to say, I nailed it.” After that first stint, he always promised himself he’d return as Edna, “putting on the high heels and wig again”, and he is.

“It’s the right show for now,” he says of the 60s-set story of racism, sizeism and sexism. It addresses issues so prescient today, he says, but in a “frothy, confectionery, wonderful, contagious musical. That’s the genius of it, you’re being told things you don’t know you’re being told – and I just know audiences will leave feeling so much better than when they came in.”

The cast performed at a Britain’s Got Talent semi-final last year, and he was back there for the final as Javert in Les Mis. Here he announced a six-week run of Les Misérables—The Staged Concert, which opened in December at the Sondheim Theatre, with Alfie Boe, Matt Lucas, and Carrie Hope Fletcher. Aften ten performances, it closed because of COVID. It will return, he says, but without him, Boe, or Lucas.

He of course portrayed Marius in the musical’s original London cast, almost 40 years ago. I can’t help but point out that, in Javert, he had a more interesting character. “Do you think?” he says.

I don’t detect his friendly sarcasm and say “I do…” uncertainly. Have I invaded one of his interviews and insulted one of his roles in less than half an hour?

However, “Trust me,” he says, “he is way more interesting.” Back in the 80s, he resumes, as the show “was so bloody long”, there was talk of cutting Marius’ ‘Empty Chairs at Empty Tables’. “I fought for it. I said, ‘If you do that, Marius is the worst character that’s ever been written.’ It would be anodyne. You have to have ‘Empty Chairs’ to show what he’s been through, the journey he’s been on, that leap from boy to man. That will give the fullness the character needs, otherwise there’s nothing there. I love the part of Marius, for me it was right at that time, but now as a man, I want to play Javert – and I prefer Javert to Jean Valjean as well.”

With regards other musicals, he once turned down the shoes of Joe Gillis in Lloyd Webber’s Sunset Boulevard, of which the original London production was also directed by Nunn. “I did the original workshops for it,” he says, “but I think, when they first put it on in the West End, Trevor was insistent it was Americans who did it.” So, Kevin Anderson took on Gillis, opposite Patti LuPone as Norma Desmond. It ran for about eight months before a three-week closure where it was reworked and recast. At this point he was asked to do Gillis “but my nose had been put so out of joint that I hadn’t done it originally, I kind of went, ‘No, I don’t want to do it.’” Although he perhaps now wishes he’d said yes, he’s also a bit fatalistic, “and if something doesn’t happen, it’s kind of good it didn’t.” He chose to do Chess instead of Fun Home a few years ago. “There are plenty of things you think you want to do and don’t end up doing,” he says, but then doing them would mean missing out on other gigs. At the end of the day, “I’m happy with the way things have worked out.”

I move on from other people’s songs, and onto his new album, We Are More Than One. Micheal Ball's “first proper” foray into songwriting. Having recorded ‘You’ll Never Walk Alone’ with the late Captain Tom Moore and The NHS Voices of Care Choir, he realised he had the means to make records from home. “I became very good friends with Amy Wadge,” he says, “one of the greatest singer-songwriters we’ve ever had in this country – she was the last person I had on my radio show before I got sick [COVID-19].” He rang her and said he wanted to give writing an album a go. The “bloody brilliant” Wadge got him set up technically for the task, that Friday they sat for three hours and he came up with the album’s final track, ‘The Song We Will Remember’. “I just loved the vibe, and I said, ‘Right, see you Monday.’”

They “wrote and wrote and wrote”, Wadge calling in Liz Rose (“one of the greatest writers in Nashville”) and Ball enrolling the likes of Ben Earle and Jack McManus, both of whom he worked with on his 2019 album, Coming Home to You. His gardener, Alex, also tends to Steve Robson’s exterior. “I said, ‘I fancy writing a song, would it be weird if I called him?’ Alex went, ‘No, call him.’ So, I phoned him up and he said, ‘Yeah, let’s do it.’” 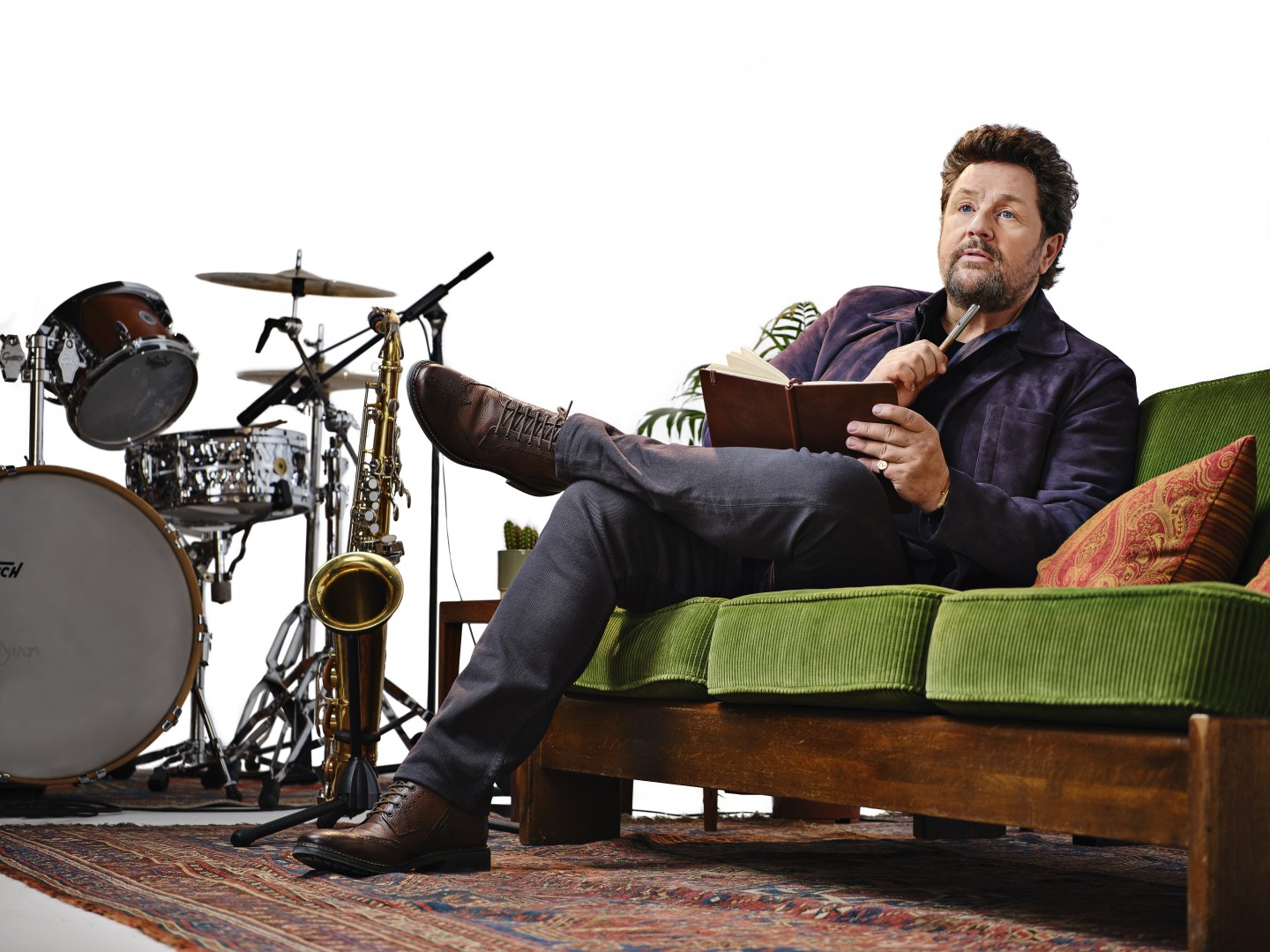 Perhaps due to the circumstances and lockdown, he says, “so many ideas were going in my head, and I felt really safe sharing crap ideas, good ideas, knowing when to abandon something.” He was making demos at home, playing them to his partner Cathy, producer Nick Patrick, and others. “Everyone was going, ‘These songs are alright, Michael...’ And I sort of knew they were.” The song, ‘Is That All Folks?’ is about his friend Victoria Wood, “how much I miss her, how much we all miss her. I’d have loved to have had her around at this time to share our experiences, she would have written the most amazing stuff if she’d been around during the pandemic. It would have been brilliant.”

The whole We Are More Than One experience was perfect, he says, and the result something of which he’s “more proud than anything I’ve done, certainly as far as my recording career goes. It’s lovely singing covers,” he says (and there are three on the album), “it’s what I’ve done all my life. But to be able to say, ‘This is my album, I made this’, and to have been part of it literally from the first idea, is the best feeling I’ve ever had.”

And just as he’s paying credit to his record company, for allowing him to run with such ideas, they join the call. Unlike me, they have the prudence to go on mute.

We Are More Than One is released via Decca Records, 7 May