“There is something of interest to see throughout the year in this magical garden.”

If you are interested in plants and their uses, or just want to enjoy the oldest botanic garden in Britain, then make 2021 the year you find time to visit the beautiful University of Oxford Botanic Garden. Situated just off the High Street, bordering the River Cherwell close to Magdalen Bridge, the Garden is celebrating its 400th anniversary this year. Founded as a ‘physic garden’ for the cultivation of medicinal plants in 1621 following a donation by the 1st Earl of Danby Henry Danvers, today the Garden plays an important role in research, teaching and conservation. 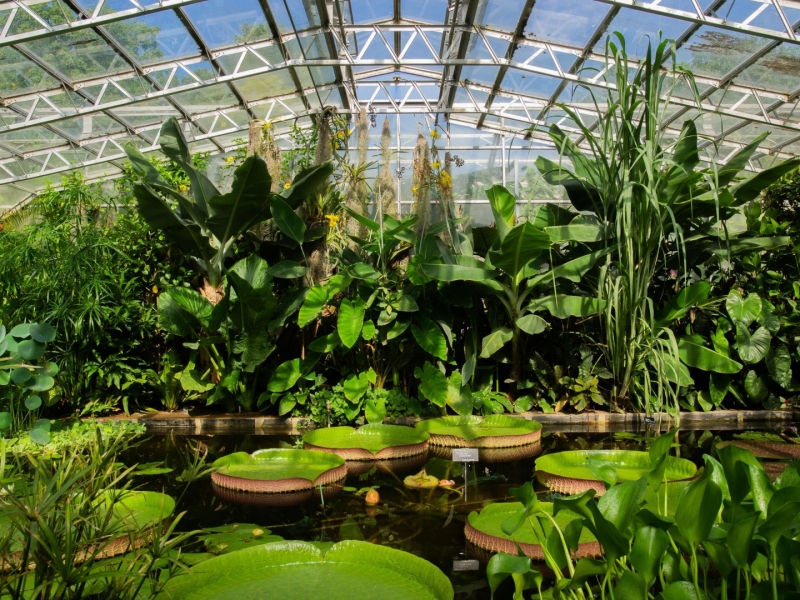 Covering an area of just 1.8 ha, the Oxford Botanic Garden holds over 5,000 different forms of plant and is a veritable oasis in the City of Oxford. Situated near the banks of the River Cherwell, when constructions began back in 1621, 4,000 cartloads of muck and dung were required to raise the land above the river’s natural flood plain. As you enter the Garden, you will see an impressive entrance, called the Danby Arch that was designed by Neklaus Stone – between 1632 and 1633 – who took inspiration for the structure from an illustration in the Italian architect Sebastiano Serlio’s book of archways.

Once inside the Garden, there are various areas to explore and you should allow at least an hour and a half to enjoy the fascinating horticultural delights it has to offer.

The Walled Garden is the oldest section. When the original Garden was first planted as a physic garden, a catalogue of the 1,400 plants it contained was compiled in 1648 by Jacob Bobart, the first keeper of the Garden. Today, several of the species documented in the 1648 collection are grown in a border in the south-west corner of the Walled Garden. Here, you will also discover the Geographic Beds, Literary Woodland, Medicinal Collection, and the Taxonomic Beds. 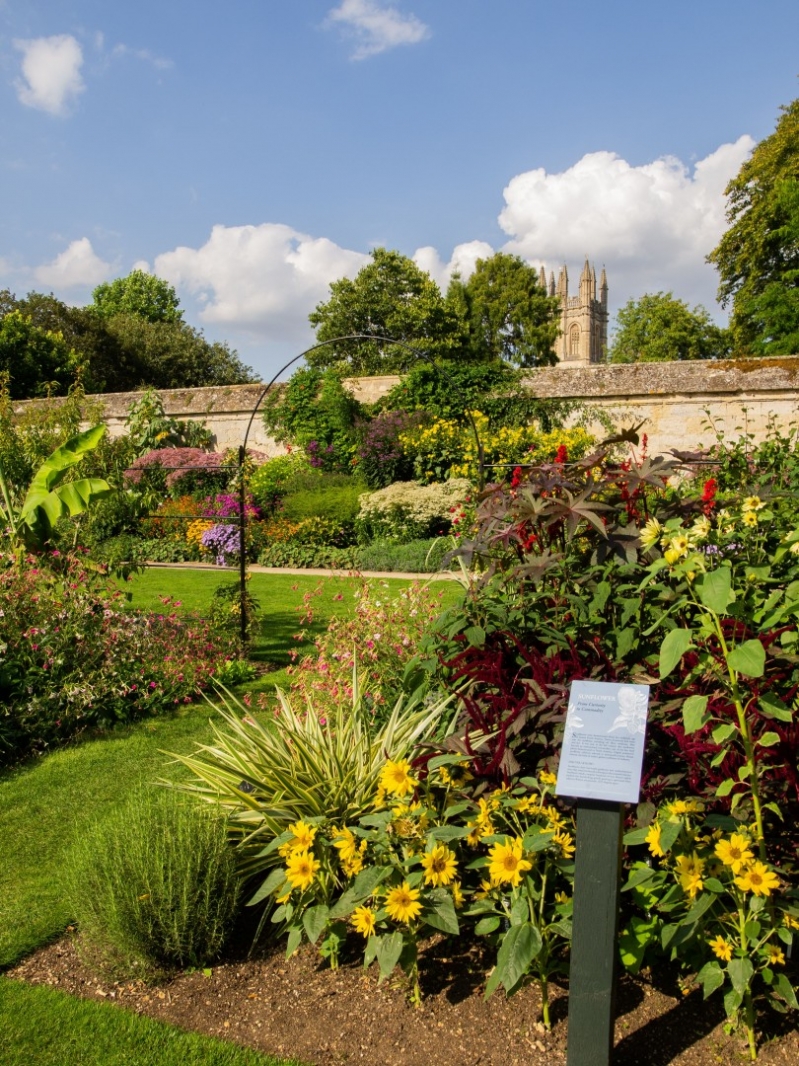 With a sheltered microclimate afforded by the Walled Garden, the Geographic Beds are home to a collection of borderline hardy species from different biogeographic regions of the world. Visitors will see plants wild-collected from the remote forests of Japan by horticulturalists and botanists at the Botanic Garden and Arboretum. Some – hostas for example, may look familiar, but the wild provenance of the plants you will see here gives these exceptional conservation value.

The Literary Woodland, with its emphasis on shade and plants grown under a tree canopy, is a wonderful place to visit in the spring when the vast collection of bulbs, epimediums and peonies can be seen in bloom. This area of the Garden was extended in 2019 with new varieties of trees, shrubs and herbaceous planting forming a literary trail. Here you will also find a specimen of Taxus baccata (English yew tree) planted in 1645, which is the oldest plant in the Garden.

Paying tribute to the original physic garden, in the south-west corner of the Walled Garden you will find eight beds, each growing an assortment of plants connected with herbal medicine and modern-day drugs used for the treatment of various health conditions. These plants contain a variety of natural products that can be modified synthetically to provide clinical drugs, or as a starting point for drug-discovery programmes.

Oxford Botanic Garden is among the first botanic gardens to adopt a DNA-based classification system for its plant collections. The plants in the taxonomic beds are ordered by their relatedness, informed by a system of classification called the Angiosperm Phylogeny Group (APG) that is based on DNA sequencing. These beds are a valuable teaching resource for students and a means of communicating the importance of plant classification to visitors to the Garden. 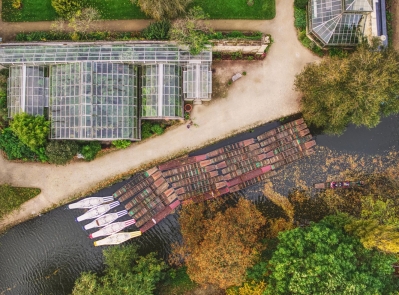 Tender exotic plants were first grown 300 years ago in the Botanic Garden’s original temperate conservatory. Now, the Garden’s seven glasshouses enable a range of plants from around the world – from tropical jungles to dry deserts and snowy alpine environments – to be grown. These include a collection of peculiar carnivorous pitcher plants that are used in research carried out by the Garden’s botanists.

Adjacent to Christ Church Meadow and bordered by the river, you will find the restful Lower Garden. Here plant enthusiasts will be inspired by the assortment of various and colourful planting groups.

The Rock Garden, newly replanted, places focus on the flora of the Eastern Mediterranean. The plants and interpretation panels explain the rich scientific and horticultural legacy left by Oxford botanist John Sibthorp who travelled across mainland Greece, Crete, Turkey, and Cyprus between 1781 and 1783 along with his illustrator Ferdinand Bauer. Together they wrote the Flora Graeca that depicts the plants growing in the Levant and is one of the finest floras ever written.

A small Gin Border features plants used commonly in the production of gin, including those in the Botanic Garden’s own Physic Gin, made at the Oxford Artisan Distillery and available to buy online from the University of Oxford’s Botanic Garden’s website. The sustainable Merton Borders, occupying 955m2, feature plants grown directly from seed, an approach to gardening that reduces the use of plastic flowerpots and peat-based composts. Using plants selected specifically from dry grassland areas around the world, these beds require no irrigation or fertiliser application.

The traditional English Herbaceous Border employs a contemporary mix of popular border perennials and bulbs that burst into colour from April to October. Favourites grown here include lupins, phlox and asters as well as more unusual cultivars that together, provide ongoing seasonal interest. 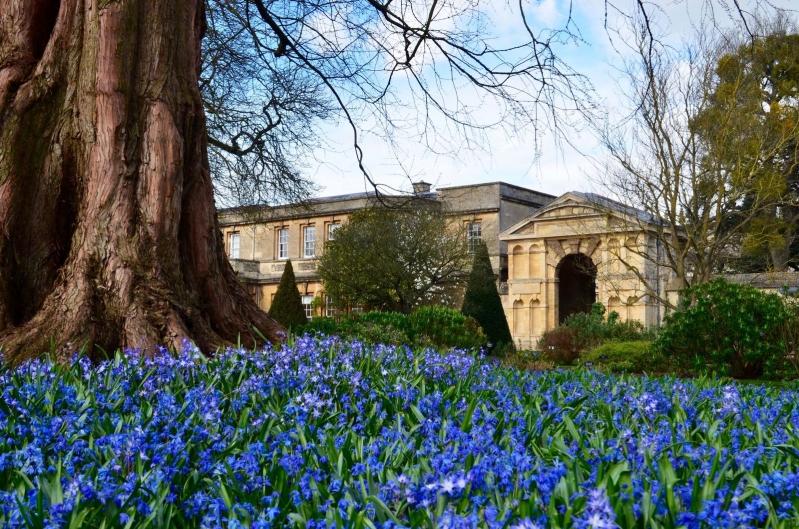 There is something of interest to see throughout the year in this magical garden. A place rich in education, research, history, horticulture and literary history, gardeners and scientists have much to thank those who work at Oxford University’s Botanic Garden.

Once COVID restrictions have been lifted there are many informative courses and talks on offer throughout the year at the Oxford Botanic Garden, meanwhile some activities are available online. All are listed at obga.ox.ac.uk/whats-on. The Garden is open to the public currently, although glasshouses remain closed. You will need to prebook and buy an appropriate ticket or annual pass. Simply visit obga.ox.ac.uk/visit-garden. The Botanic Garden is fully wheelchair accessible but dogs, except registered assistance dogs, are not permitted.

As part of the 400th anniversary of the University of Oxford Botanic Garden, the Friends of the Garden and affiliated Harcourt Arboretum, six miles south of Oxford, are seeking to raise £750,000. This money will be used to restore both the existing path network and introduce new paths that will enhance access to this important site. New planting areas will also be established at the Arboretum preparing the site for this century and beyond.

To find out more and donate, visit obga.ox.ac.uk/friends-400th-anniversary-appeal