“I don’t enjoy spinning too many plates”

Taste the World at RHS Wisley

We're talking ahead of your appearance at The Big Feastival in August, can you tell us what we can expect?

I’m going to be talking about my new book, MEZCLA which is coming out in July. I’ll be explaining its concept, demo-ing a recipe, and talking about how people can use the concepts and ideas to create their own things in the kitchen. 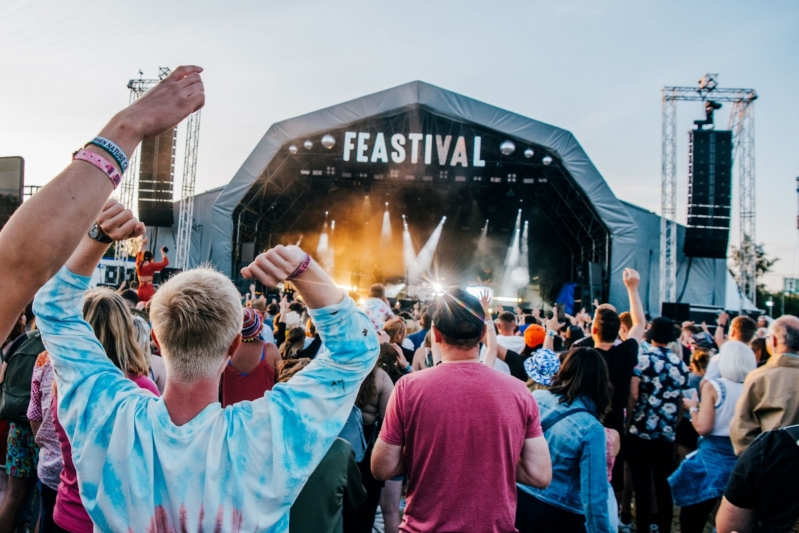 How long has MEZCLA been in the works?

I started developing the recipes last March, so it’s been just over a year. It took me seven months to do the recipes and then a few months for all the design elements.

How are you feeling about the release of your first solo book?

I’m very excited but also very nervous – I think that’s normal though. Also, because I’ve tested the recipes so many times, seen the various PDFs, and edited and proofread them so much I’m kind of sick of it if I’m being honest! I keep reminding myself that everyone else will be seeing it for the first time, so hopefully they won't open it and want to throw it in the bin which is kind of what I want to do at the moment. No, I am really excited and the feedback I’ve had from the publishers and everyone who has seen it has been really positive.

You get your cooking inspiration from three key parts of the world which mean a lot to you; is there a dish within the book which encapsulates all three?

There are quite a few but I think one of my favourites is a prawn and habanero lasagne which, in its original form, was a bit Mexican, Italian, and Brazilian. Obviously, the lasagne part of it is Italian and in the oil there is habanero and chipotle, both Mexican chillies. The cheese element is something called requeijão which is a Brazilian cheese paste so it’s a little bit of everything from those three countries which kind of shaped me as a person and a cook.

Do you have any one person that influenced you going into this career?

I hate to sound too obvious because I did work for him for five years, but I think one of my biggest inspirations has been Yotam Ottolenghi. He inspired me long before I met him or worked with him. His use of citrus and beautiful vegetables and making things look like art on the plate was always so inspirational to me. So many recipes in the book are inspired by that way of cooking. An obvious answer but a true one.

What was it like to go into his kitchen and see his process from behind the scenes?

It was pretty surreal. To be honest, for the first nine months of working in one of his restaurants I didn’t really meet him properly; I just saw him here and there when he came to tastings without ever really speaking to him. When I moved to the test kitchen and was working with him every day though, that was a dream come true. He's such an incredibly kind, wise, and fair person which is a lot to say in this industry; most male chefs are not like that and he does have everyone’s best interest at heart.

What do you think needs improving within in food industry?

I think – as with any industry – the main thing that could do with improvement is equality. Whether it’s gender equality or any other, making sure more underrepresented people feel safe and feel welcome in the industry is so important.

On that topic, you were named one of the most influential women in food by Code Hospitality; what did this recognition mean to you?

It was a bit of a shock, to be honest. It means a lot and it was a complete honour, but it’s a lot of responsibility. With that title, I feel like I need to prove myself but that’s not really a problem because I feel that I’m doing as much as I can. I’m a mentor for a charity called Be Inclusive Hospitality which aims to help lacking minority ethnic people in the industry. I do a lot of other charity work as well. It’s a bit of pressure but that’s a good thing.

From your experience of working in stressful kitchen environments, what is your best piece of advice for keeping your cool?

Breaks in the walk-in fridge!

What are your top three cupboard must-haves?

White miso paste – which I think a lot of people only use in an Asian context – is definitely up there. With a flavour profile of savoury and sweet, you can use it in any context really; it's great in soups, ragus and even ice creams. Another one is tomato paste or tomato purée, I use that a lot to add depth to sauces. I make fish soup regularly, to which I always add a lot of tomato paste and it makes people ask why it’s so red and has so much flavour – it’s just tomato paste. Dried chillies would be my other one, I wish I could pick five, but I’ll just say dried habanero chillies which are really fruity and smoky and bring such a depth of flavour.

Do you have a dream collaboration?

I would love to cook with Eric Wareheim who is not only a great cook but an amazing actor and comedian; I just think that would be really fun. He’s actually given me a really nice quote for the book which is exciting.

Just carrying on with recipe developments for different brands, magazines, newspapers, and publications. Maybe something in TV and YouTube but honestly, I have no interest in being extremely famous or anything like that. I like to keep a bit of a low profile, so I want to take things slowly – I have no agenda. I don’t enjoy spinning too many plates, not in a lazy way but I’m just perfectly happy with letting things happen. I have no interest in getting thousands of new followers, I just want to take things slowly.