HOW TO ADD PERSONALITY AND CHARACTER TO YOUR HOME WITH COLOUR

When Monet moved to the quiet farming village of Giverny with his family in 1883, the sizeable garden which surrounded his rented house was not much more than an orchard enclosed by high stone walls. Together with the help of his older children and future wife Alice’s family, he started to tend the land; initially growing vegetables for consumption during the warmer summer months. By 1890, as he enjoyed both artistic and financial success, Monet was able to purchase the Giverny house and land. Finally, he was able to start developing his vision for a lavish flower garden, providing him with inspiration for his paintings. 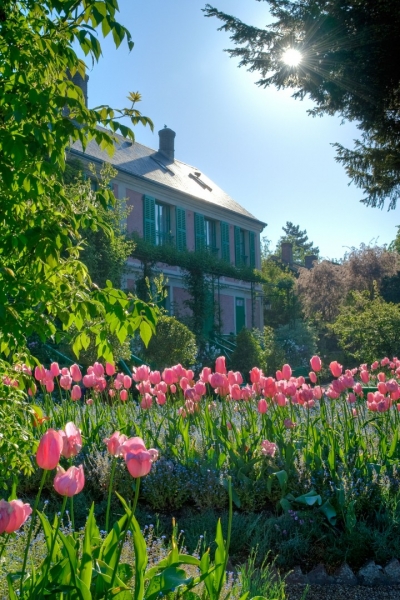 The flower garden, Clos Normand, was cultivated to the front of the long, narrow house. Together with his team of gardeners, Monet had the opportunity to create perspectives and symmetries filled with colour within the almost one-hectare plot. Although Monet was very disciplined (and something of a tyrant) he did not care for organised or constrained gardens. He planted the beds mixing the simplest flowers, such as daises and poppies, with rare plant varieties. The central alley was bordered with pines and originally separated the garden into two halves. This was removed and replaced by iron arches on which climbing roses grew. Just two yews – those closest to the house – were retained to please Alice. Wanting the house to blend in with his garden, the exterior walls of the house were painted pink and the shutters green instead of the traditional grey. He added a gallery to the front of the house, a pergola covered with climbing roses and Virginia creeper was grown on the façade. Vegetables were no longer grown in this part of the garden but in a large garden of another property Monet purchased at the opposite end of the village.

Over the years Monet developed the botany, buying rare, young plants at considerable expense. Not only was the property his home but also it was also the centre of Monet’s world and his most prized art studio.

Ten years after first moving to Giverny and delighted with the improvements he had made to his flower garden, he wanted to expand still further. Thus, he also purchased a neighbouring plot located on the other side of the railway. It was crossed by a small brook (the Ru, a diversion of the Epte), so with a water source, he decided to create his first small pond; much to the horror of his peasant neighbours. He met fierce opposition as they believed he would put strange plants into the pond that would poison the local water supply. Whilst waiting for official permission to undertake the work, he was in Rouen, painting a series of pictures of the Cathedral. Here, he visited the director of Jardin des Plantes, Monsieur Varenne, who advised him on the best type of plants to cultivate in the Normandy soil and climate.

Finally, he got permission and, inspired by the Japanese gardens depicted on prints he avidly collected, Monet set about creating his own Japanese-inspired water garden. He had his famous Japanese bridge constructed, covered it with climbing Wisterias. Other, smaller, bridges were built and he planted weeping willows, cherry trees, rhododendrons and azaleas, ferns, irises and much more around the water’s edges. The pond was filled with his iconic water lilies (Nympheas) which bloom in July and August. 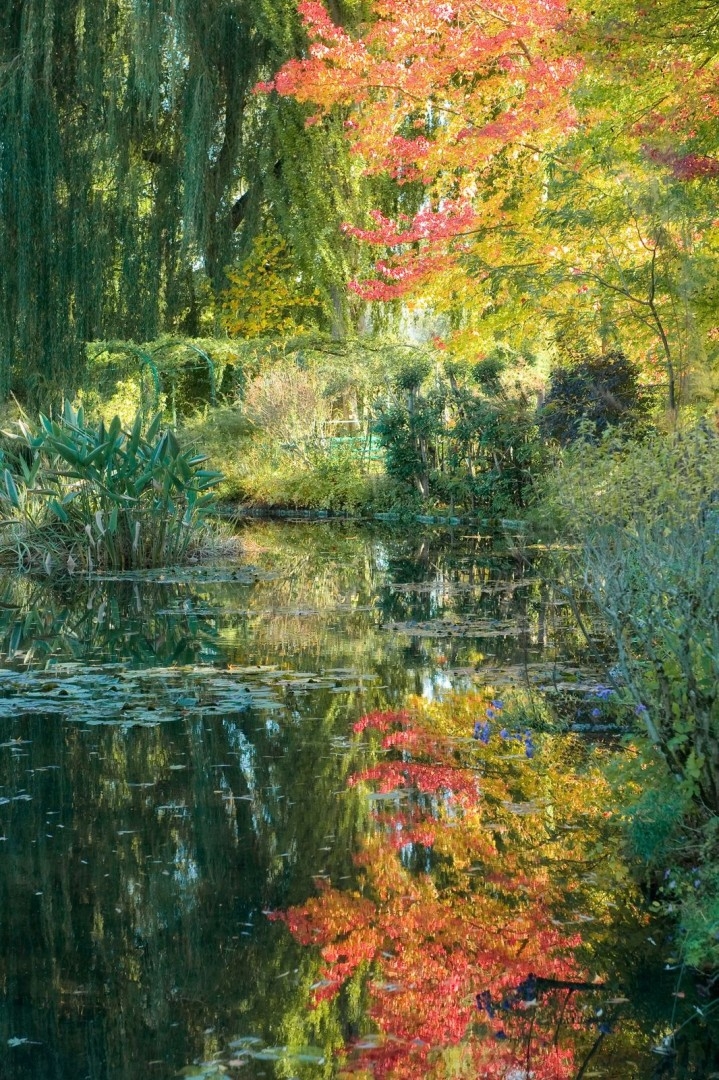 Never before had an artist created a garden just to provide a landscape and subjects to paint. The garden and his beloved water lily pond were to be the focus of his artistic attention for more than twenty years. As the pond area developed, and as he was always looking for mist and transparencies, he dedicated his paintings less to flowers but more to the reflections to be found in the water.

During the forty-three years that Monet and his family lived at Giverny, not only did he create his magnificent gardens, but he also developed the house, remodelling it to suit his own tastes and needs, not only of his family but also his professional life.

Following Claude Monet’s death in 1926, although his son Michel was the main beneficiary of his estate, it was in fact Monet’s step-daughter Blanche who cared for the property. By the end of World War II, both house and garden were much neglected and in 1966, Michel Monet made the Academie des Beaux-Arts his heir.

Reinstatement of the house and garden took some ten years to achieve. With the assistance of Monet’s contemporaries together with André Devillers and Georges Truffaut, a distinguished gardener who had visited Giverny whilst Monet was alive and had personal knowledge of how the garden once looked, the process of restoration began. Thanks to many generous donations, many from the United States, the pond was re-dug, the Japanese bridge restored, and the house was given a facelift. The ancient furniture and Monet’s precious Japanese prints also received attention. Visitors were welcomed back to this utterly amazing property in September 1980.

If you are planning a visit to France this year, Giverny is just 50 miles west of Paris. For further information, visit  giverny.org