Forget the history books - our pubs provide an enjoyable vantage point from which to enjoy Oxfordshire’s rich and varied past.

Let’s start in Oxford and we can’t think of a better place than the Bear on Alfred Street. Established in 1242 and famously Oxford’s oldest pub. Its nooks and crannies are home to a collection of ties which have climbed the walls and lined the ceilings since the 1950s when landlord Alan Course persuaded a punter to donate his old school tie; an act that has created a lasting legacy.

Onto the Turf Tavern in Bath Place. Yes, it is impossible to find but perhaps this led to its popularity with the Roundheads who reputedly used it as a favoured location to plot and conspire. Perhaps the Kings Arms on Holywell Street could be considered its equivalent in the annals of subterfuge: it was here that writer and MI6 officer Grahame Greene met with Kim Philby in 1944, to turn down promotion and a career in espionage, choosing instead to pursue writing. And, of course, The Eagle and Child (temporarily closed at the time of writing) has reached near-mythical status as the preferred meeting place of JRR Tolkien and CS Lewis for their informal literary discussions with fellow Inklings. 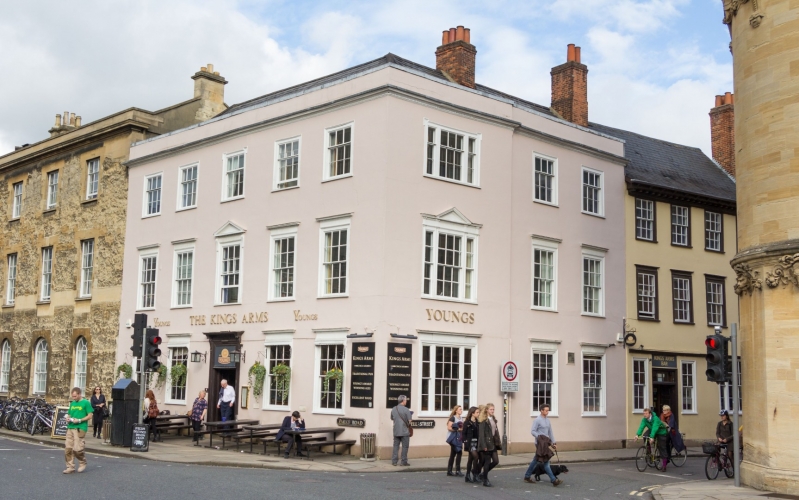 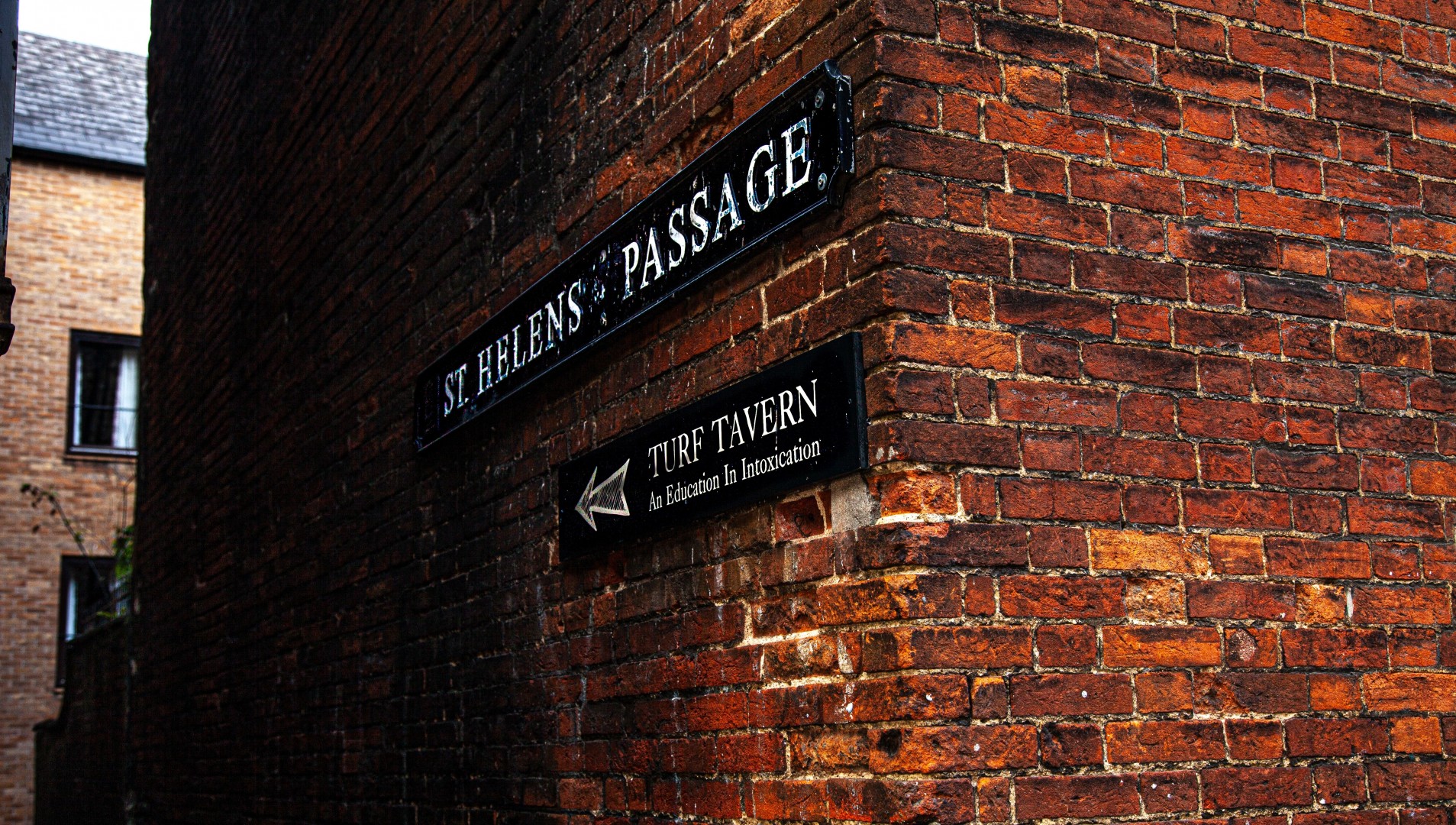 The Crown, tucked away up a ginnel off Cornmarket, provided a regular pitstop for Stratford’s finest, William Shakespeare. With his actorly friends en route to London Town, he would stop off at this hostelry, then known as the Salutation Tavern. Another pitstop, but this time for those using the waterways, rather than travelling by road; The Head of the River at Folly Bridge, on the site of what was known as St Aldate’s Yard, the wharf house and warehouse adjacent to the wharf which dates back to 1638. The winch which was once used to lift materials from the visiting boats is still a notable feature of the sprawling riverside terrace. 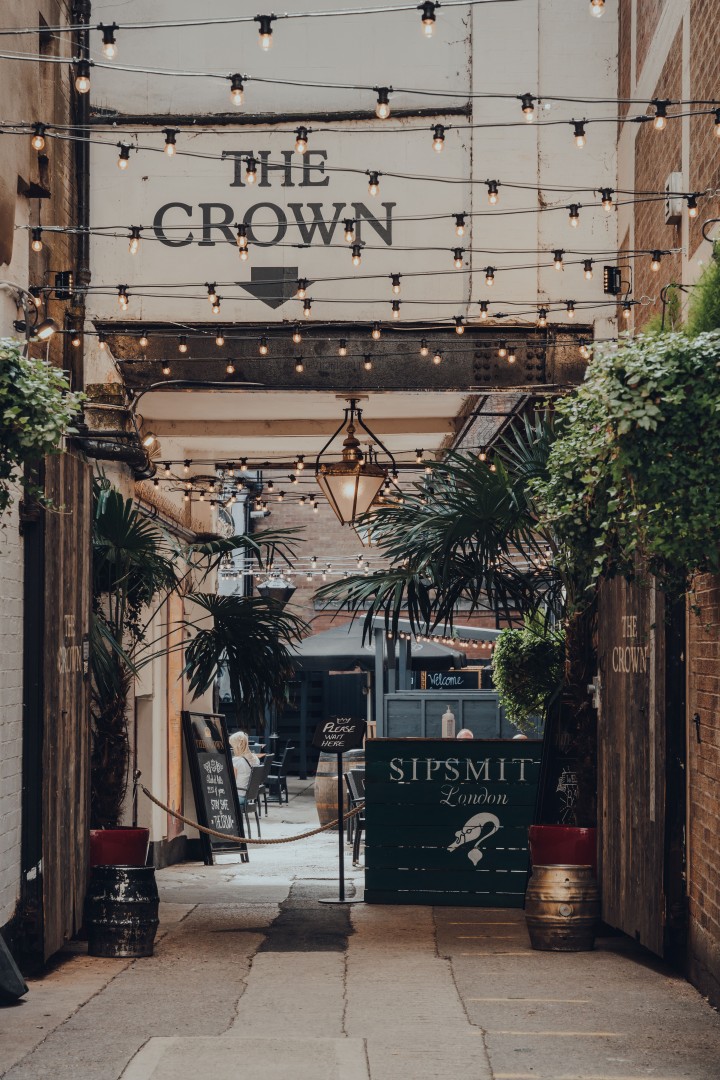 It would be seriously remiss to leave off mention of the Morse Bar which we’re glad to see has been retained following The Randolph’s impressive refurb. This cosy space within the Victorian Oxford landmark offers cocktails, wines, beers and a chance to honour the best detective Oxford never had, created by one of the city’s finest fiction writers, Colin Dexter. And allow us a little shout-out to the Jericho Tavern, which will surely find its place in the history books as Oxford’s answer to the Hawley Arms; a pub which spawned a music scene. It has featured Radiohead, Ride, Supergrass and more recently Foals and Glass Animals.

Moving out of the city centre, and up the Woodstock Road to Wolvercote we find the Trout Inn, also with a Morse connection as it is practically a regular in the old ITV adaptations. However, there is more to this pub than a few literary name checks. Reputedly, it is haunted by no lesser a personage than Rosamund Clifford, much-loved mistress of Henry II. Fair Rosamund shunned society to live as a nun at Godstow Nunnery, the ruins of which are just over the bridge on the way to Wytham, but undeterred, the King continued to arrange liaisons with his lover nearby, leading to rumours that the site of the Trout is home to her spirit. Not only does she live on in the pub, Rosamund’s name is evergreen in Wolvercote village itself, with two streets bearing her name. 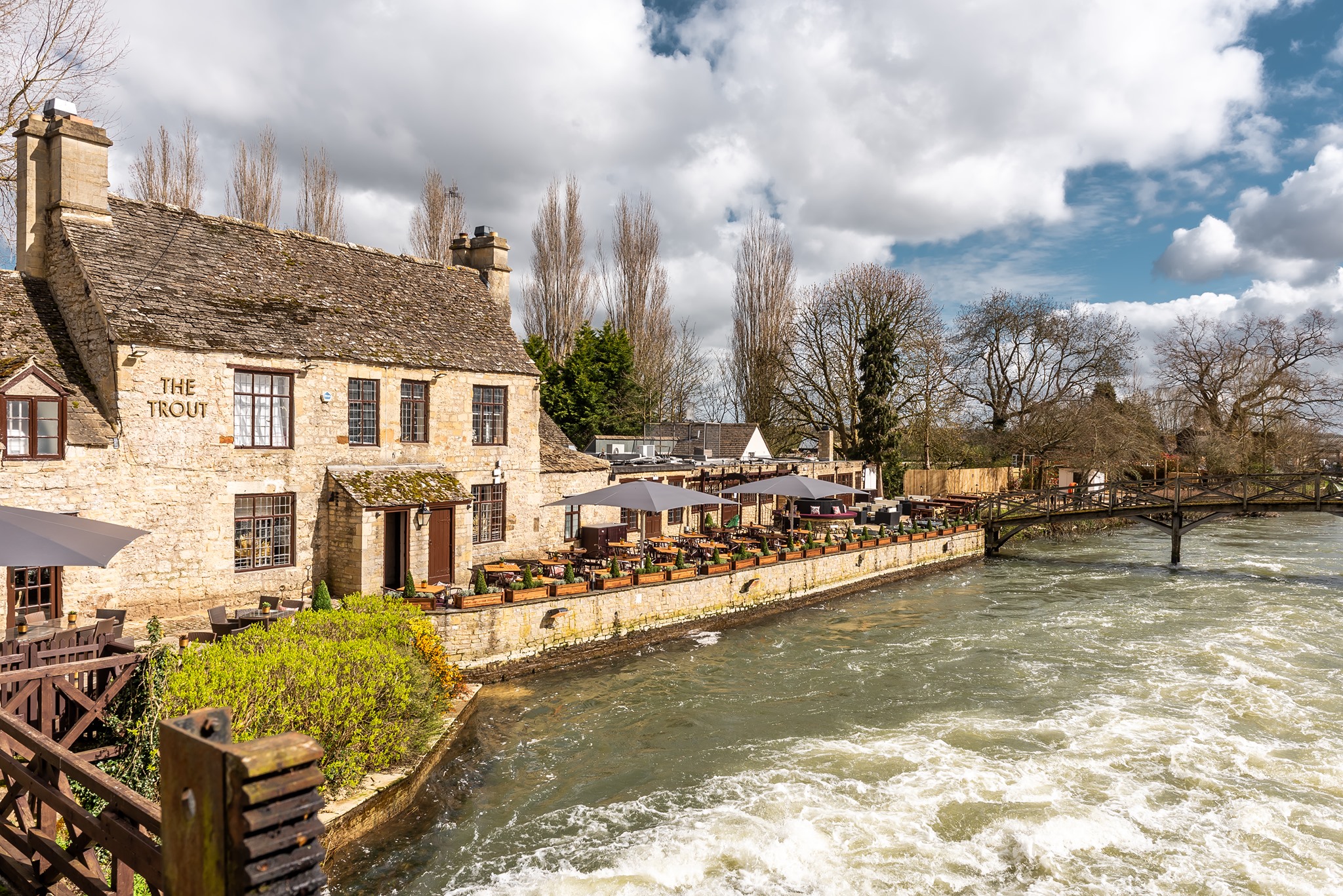 North to Yarnton, where you’ll come across The Turnpike, a Cotswold stone building with a slate roof described by Sir John Betjeman as ‘the finest in Oxfordshire’. The pub dates back to the 1750s and was known as The Grapes until a refurbishment at the turn of this century saw it renamed The Turnpike in recognition of the cottage, toll booth and gate across the road which once stood at that site as part of the Turnpike Trust.

Beyond Kidlington and in the village of Beckley is the much-loved Abingdon Arms with its gently sloping terraces and sweeping views across Otmoor and beyond. According to local legend, it was when looking across the chequered fields of this nature reserve that Lewis Carroll came up with the concept of the giant chess board in his classic, Through the Looking Glass.

History takes a more gruesome turn as we spread out across the ‘shire. At Remenham near Henley on Thames, we find The Little Angel Inn, said to be haunted by the ghost of Mary Blandy, the 18th-century poisoner. Blandy was hanged for poisoning her father with arsenic, allegedly believing it to be a love potion which she hoped would encourage him to take a more benevolent view of the man she was determined to marry against his stated wishes. On realising her error, she fled to Remenham (strictly speaking Berkshire but on the border) to be with her friend who was the landlady of the pub, but Blandy was captured, brought to trial, and eventually hanged.

Another historic Angel in the area, The Angel on the Bridge in Henley has a distinctly more glamourous claim to fame as one-time host to Hollywood royalty Grace Kelly. She sipped champagne as she watched her brother Jack win a rowing race outside on the river.

Back to law and order, and on to The Old Crown in Faringdon. This Grade II, listed 16th-century coaching inn was used by Lord Chancellor to James II, Judge Jeffreys. He held court in the Inn after the Monmouth, or Pitchfork, Rebellion and gained the nickname The Hanging Judge after ordering the death four or five Faringdon locals whom he deemed to be on the wrong side of history in the West Country’s attempt to overthrow the king. 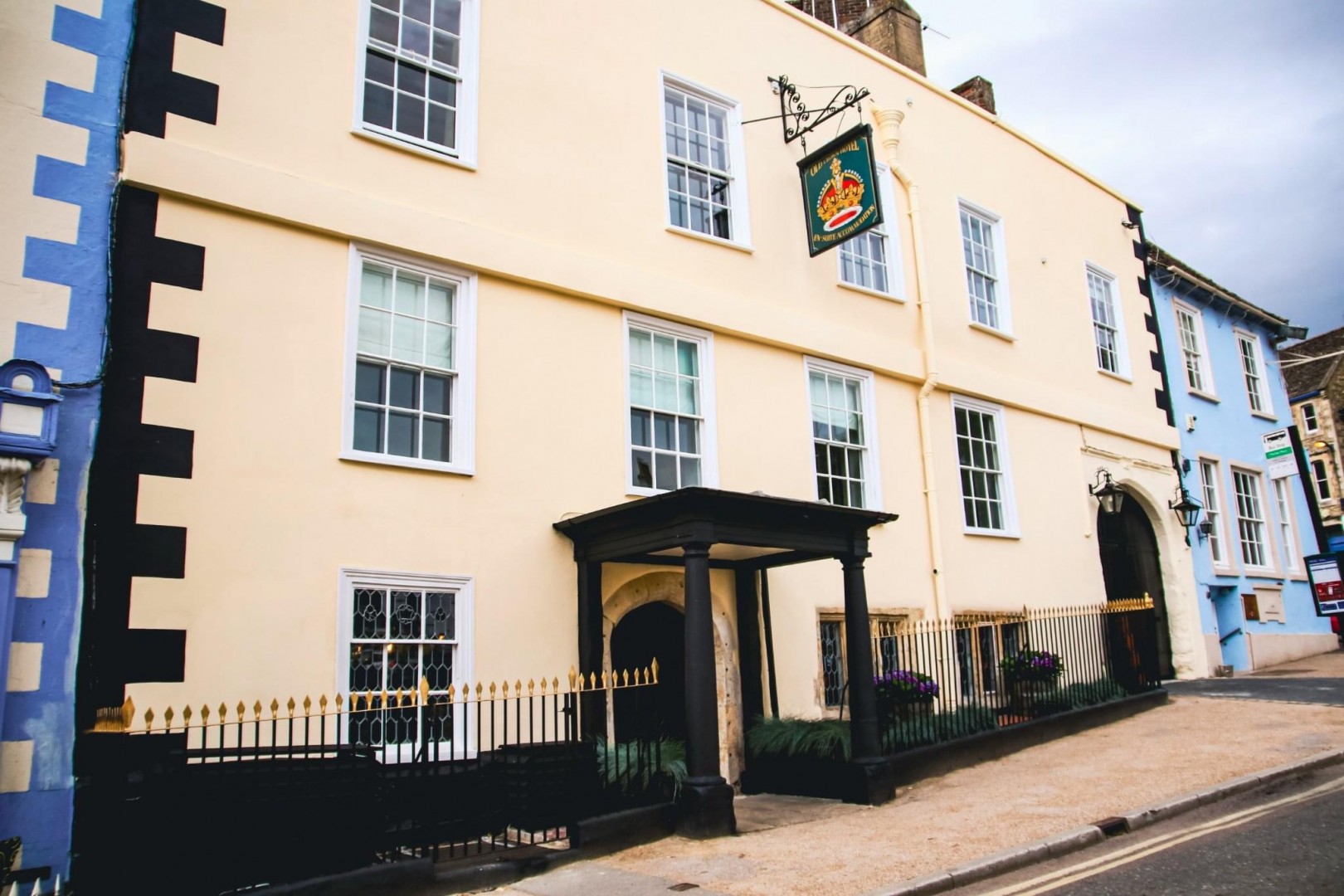 More war-related locales but earlier that century: the English Civil War, which has plenty of resonance in Oxfordshire. One of the most famous pieces of art inspired by this period is the Yeames painting, And When Did You Last See Your Father. Picture the scene: a young boy, son of a Royalist stands in front of a panel of Parliamentarians who have set up an impromptu court at no less a place than Ye Old Reine Deer, the oldest pub in Banbury.

We might moan about the roads today, but at least we can traverse the county without fear of highwaymen. In Restoration England, Claude Du Vall, an impoverished French nobleman-turned notorious robber made his base at the Inn now known as The Holt Hotel at Hopcroft, near Bicester. From there, he would pay close attention to the passengers of passing coaches. Allegedly he had an eye for the ladies and, whilst legend has it that he would allow the prettiest to keep their jewellery in exchange for a dance, we suspect the truth may have been a little more exploitative.

Sticking with brigands and ruffians, the most notorious of them all, Dick Turpin, was said to favour the George in Wallingford. Apparently, the small room overlooking the yard allowed easy access to jump from the window, straight onto his horse, Black Bess, tied up by the entrance arch just below. Handy for both a refreshing pint and a quick getaway. 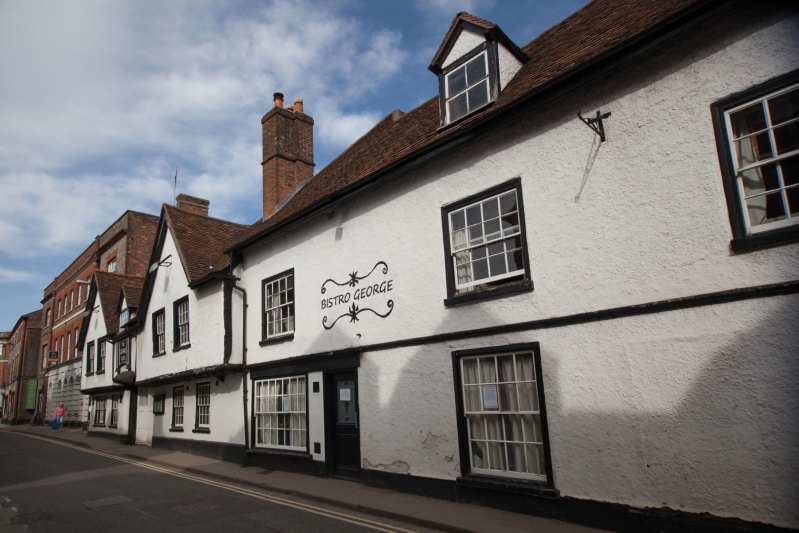