A Career in Coffee

“They have to be better than somebody on the outside because they will have a criminal record when they come out.”

Statistics show that prisoners who find employment are 50% less likely to return to prison, yet only 36% of prisoners currently manage to find work within two years of being released. After being approached by the Ministry of Justice to help address the state of reoffending in the UK, Redemption Roasters operate a roastery and barista training centre at Aylesbury Prison, training young offenders in professional roasting and competition-level barista skills (in association with Milton Keynes College, Redemption have also opened additional local barista training centres at HMP Bullingdon and HMP Spring Hill). Here, founder Max Dubiel tells us more.

Could you give us a little more background as to how Redemption Roasters came to be?

We were originally in the coffee world – a small roastery with some wholesale clients. We would roast a number of coffee brands and supply our clients with machinery, training and advice on setting up a coffee shop – very much the job of a roastery. Then we were approached by someone from the Ministry of Justice who was looking to get more specialist training for the coffee sector into a prison. They asked us whether we could do some one-off barista training. Then we thought we could do something a little bit more exciting, and actually open a roastery in one of the prisons, and encompass the whole value chain – not just the coffee making bit, but the roasting bit. They really liked the idea. A year and a half later – after plenty of contractual negotiations (we’re dealing with a ministry here, not a normal client) – we got going. It became so successful that it’s now everything we do. We have three guys in the prison every day, and they teach ten trainees coffee skills.

Can any young offender at Aylesbury join the course?

There’s a long waitlist; we’re by far the coolest workshop in the prison – between bricklaying, industrial cleaning, recycling and coffee roasting, you can imagine which one is going to be most popular. Places aren’t just assigned by chronological order. A lot of factors come into play; length of sentence, when and where to they’re going to get released, their behavioural record. We interview the guys and see how motivated they are, because we’ve got very limited time and resources, and we don’t want to waste our time on somebody who doesn’t really latch onto this opportunity. So generally the atmosphere in the workshop is great because the guys are really keen, very excited, and genuinely interested in a career in coffee. They are incredibly motivated, they are really loyal, and they soak the knowledge up. They have to be better than somebody on the outside because they will have a criminal record when they come out. They have to be twice as good as any other barista to have a chance.

What does the training consist of?

The first training we try and get into them is how to work in a hospitality environment – so any shop, any restaurant, that has an espresso machine. How to extract a shot, set up the grinder, programme the machine, the difference between a flat white and a cappuccino – basic coffee knowledge that’ll be more likely to get them into jobs. Then we build on that, we get them into the production side of things; the logistics of our packaging line. Once they’re very familiar with that, and they’ve had plenty of additional education around coffee – green coffee, sourcing, the development of coffee beans, the various countries of origin – then we get into roasting, the most complicated of all the coffee aspects.

In addition we run a little coffee shop inside the prison for the staff, a great testing ground for barista skills. Once they’ve graduated the barista skills academy, they can make coffee there for the prison staff. It’s a really good way of interacting with the staff because normally I think it’s very much an authoritarian kind of relationship between staff and prisoners. 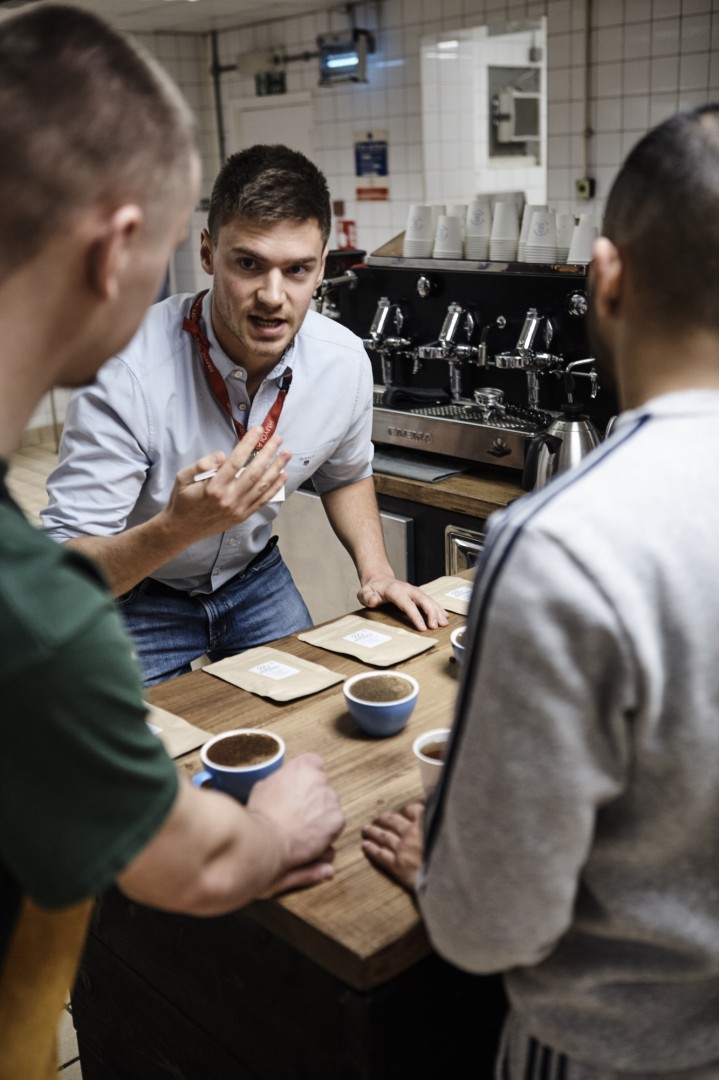 I think there should be more and I would encourage other enterprises to do this. I’m not saying we are the only one; there are some much bigger organisations that we very much look up to – Timpson for example. We were really lucky in the sense we were approached, and the guys at Aylesbury and in the Ministry have been really positive, supportive and helpful. I think the biggest scare factor for private businesses is the response time of the public sector domain – it could take months, if not years, for something to come to fruition. But actually if the right people are behind it and have the right motivation, it can come through much more quickly than you’d think.

Are you able to learn of what the young offenders under your wing go and do after they’ve left prison, so you can see how your work has paid off?

It’s rare for a young offender to get released right into the public from Aylesbury; they get moved to other prisons closer to home, and we keep close records of who we’ve worked with and where they go on to. The guys who do get released straight from Aylesbury, we try and either hire ourselves or place with one of our wholesale clients – which is of course the best way of actually knowing what they’re up to. I guess we are probably more suited to employing them than someone who has never dealt with an ex-offender. We know how these guys work, we know some of the challenges when they come out. It’s pretty daunting when you come out of prison, suddenly having all the freedom again. They’re so afraid of doing something wrong, of dealing with everyday things that you and I would just take for granted. Things like modern payment methods really scare them, they haven’t seen that, people are paying with their phones now and they’re afraid of being scammed. They’re afraid of contracts, committing to something, simple things are really tricky for them. As an employer you need to understand that and help them. Ideally the perfect journey for someone will be that they work in our roastery, they’re educated by us, then they work for us on the outside for a couple of months, and then we pass them onto one of our wholesale clients.

Waddesdon is a really great client. Not just do they purchase a very good amount of coffee, but also they’re a very prestigious client – being a Rothschild property, and absolutely beautiful. They’re a great team to work with, and that’s really important.

What’s next for you guys?

We’re heavily expanding the wholesale aspect of things and really looking to work with great clients like Waddesdon Manor – potentially other National Trust sites. We’re also expanding the retail side of things; we have three coffee shops in London and we’re looking to open a fourth there early in the New Year.