I walked into the Watermill not having seen the award-winning Amélie on screen, putting me in a position where I wouldn’t be comparing it with the beauty and charm I’ve heard the film has in spades. So, as a piece of theatre alone, it looks delightful and excellently stages the story’s most bizarre moments – specifically those involving giant figs and a singing gnome. Further, while it lacks characters I especially cared about, each one is distinct and memorable during this retelling of a girl who simply wants to do good things for other people. 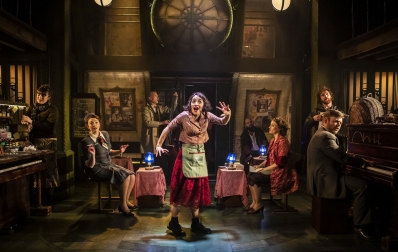 There’s no shortage of gifted actor-musicians in this Michael Fentiman-directed offering. How so many violin players manage to navigate the small (however endearing) Watermill stage without someone getting an elbow to the face is in itself admirable. Further, although to me Nathan Tysen and Daniel Messe songs aren’t all that hummable following one listen, they do inject more gorgeousness into the show – especially ‘The Girl with the Glass’, poignantly performed by the title character and Dufayel, played by Audrey Brisson and Johnson Willis respectively.

Madeleine Girling’s spellbinding set greets you on entering the auditorium. One of its talking points is an impressive pulley system that frequently lifts Amélie into the air. This inevitably loses its impact the more you see it, but always serves as a reliable way to elevate her into the visually alluring apartment in which she spends night after night alone. This is a resourceful show, with an accordion that doubles as a bridge and pianos used as heightened levels of staging.

Highlights include Caolan McCarthy’s flawless impersonation of Elton John during the protagonist’s imaginary funeral, and the feisty championing of women that is ‘A Better Haircut’. Nothing made me laugh out loud or particularly moved me, but I can’t fault the professionalism, talent and energy of this cast, during a well-oiled retelling of something cherished, complete with a healthy dose of mischief and dark humour.

Amélie is at The Other Palace, London 2 December-1 February