“We believe this small investment can make a significant impact.”

RUMAHfest is coming to your home this September. Expect an eclectic mix of commissioned spoken word and sonic performances, scratch works, food treats and comedy skits re-imagined on a digital platform. The festival will feature London based Asian artists from Philippines, Vietnam, Malaysia, Uzbekistan, London born Sri Lankan and many more.

RUMAHfest will kick start with an online ‘easy-to-follow’ embroidery workshop. Learn to create an empowering imagery to represent an allyship with the womxn in your life. Hosted by Nicole Chui from ThatSewNicole, an embroidery artists who was recently named ’25 future faces 25 and under’ by Evening Standard, and was recently a guest designer for Nike By You- Unseen London.
The festival will be presenting two scratch works, ‘Sexy Asians Around Ur Area’ by Camilla Anvar and Zelda Solomon. Both of the artists will be collaborating and exploring stories about being young, loss and ‘Asian-ish-ness’ in today’s climate. The second scratch ‘Precious Cargo’, is a biography of an Vietnamese adoptee, from the world’s largest humanitarian adoption program in 1975 , presented by Australian Children’s Book author Barton Williams and Singaporean Malay theatre-maker Mohamad Faizal Abdullah. RUMAH’s commissioned spoken word digital performance include first time collaborators Troy Cabida, a London-based Filipino poet and producer for the open mic night Poetry and Shaah will be joined with Nazreen Mohamad, a Malaysian spoken word artists, whose piece ‘Between Two Worlds’ is set to be included in the the International Slavery Museum in Liverpool, together with Nush, originally from Sri Lanka, is a self-taught guitarist, who will be releasing her album 'Tenerife' later this year.

The other commissioned sonic digital performance will feature another first time collaborators, Adeeb ‘Yung Sultan’ Razak, a rapper and interdisciplinary artist from East London. He recently released the single/music video for ‘East Side Airlines’, Cuong Pham, co-founder of Indigo Magazine, and a monthly hosts at NTS. And lastly, Arya Rinaldo, a resident DJ at AAJA in Deptford, and has shows on NTS, Reprezent and SOAS Radio. During the live stream there will be an interval performance by ComediAsians, UK’s first all Asian improv troupe and a short break to learn and make your own Central Asian delicacy facilitated by Yuldosh Juraboev from Orzu Arts Theatre & Bar, a Central Asian theatre company based in London, that explores the richness of the performing arts of Central Asia. 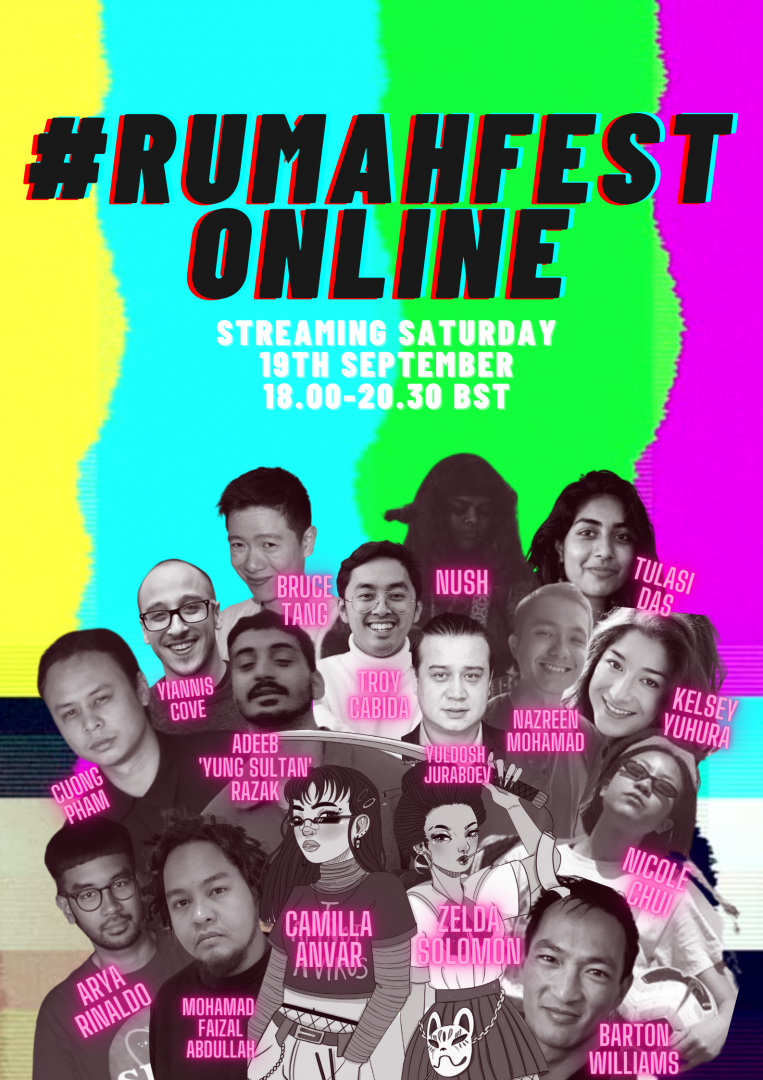 The festival is free to access but we will be encouraging donations or Pay-What-You-Can. A percentage of the donations received will be shared with Rich Mix’s #SaveOurVenues campaign.

“…The panel from Ignite fund is delighted to be able to support RUMAH Fest, developed by Nur Khairiyah, a one-day festival opening up spaces for Asian artists in London. This is an urgent and timely creative intervention supporting the development of Asian artists who are invisible or under-represented, and we believe this small investment can make a significant impact.”