“You cut open a kiwi fruit and it’s like, what the f*cks going on there? ”

Brothers Oliver and Louis Leimbach – otherwise known as Lime Cordiale – caught up with us from their home in New South Wales, Australia ahead of their visit to Oxford’s O2 Academy in January. We discussed with them their mini-album collaboration with Idris Elba, as well as touching on the importance of sustainability, thrift shopping and most importantly, where the hell dragon fruit comes from.

As you said, you’re just coming to the end of lockdown over in Australia; has it served as quite a creative time for you?

Oliver: We’ve been creative because there have been no shows happening. I think we otherwise would’ve been touring extensively which would have been pretty hectic, but instead, with that time we have been at our place in the country in New South Wales and we have our producer next door and we’re creating our third record.

Do you find touring more energising or exhausting?

Oliver: It is kind of energising, but you also get super knackered from it and whether you like it or not, your health levels go downhill. There’s just so much sitting down and waiting and it’s pretty hard to eat well – especially when you have the fridge stocked full of beers. There’s a lot of downsides in that way, but it’s energising because it’s such a thrill and there’s a huge adrenaline rush.

Louis: It’s been nice to have a break from that because it can be exhausting. The first three months I think we kinda needed and appreciated that break – it was a relief – but then we got pretty sick of it. 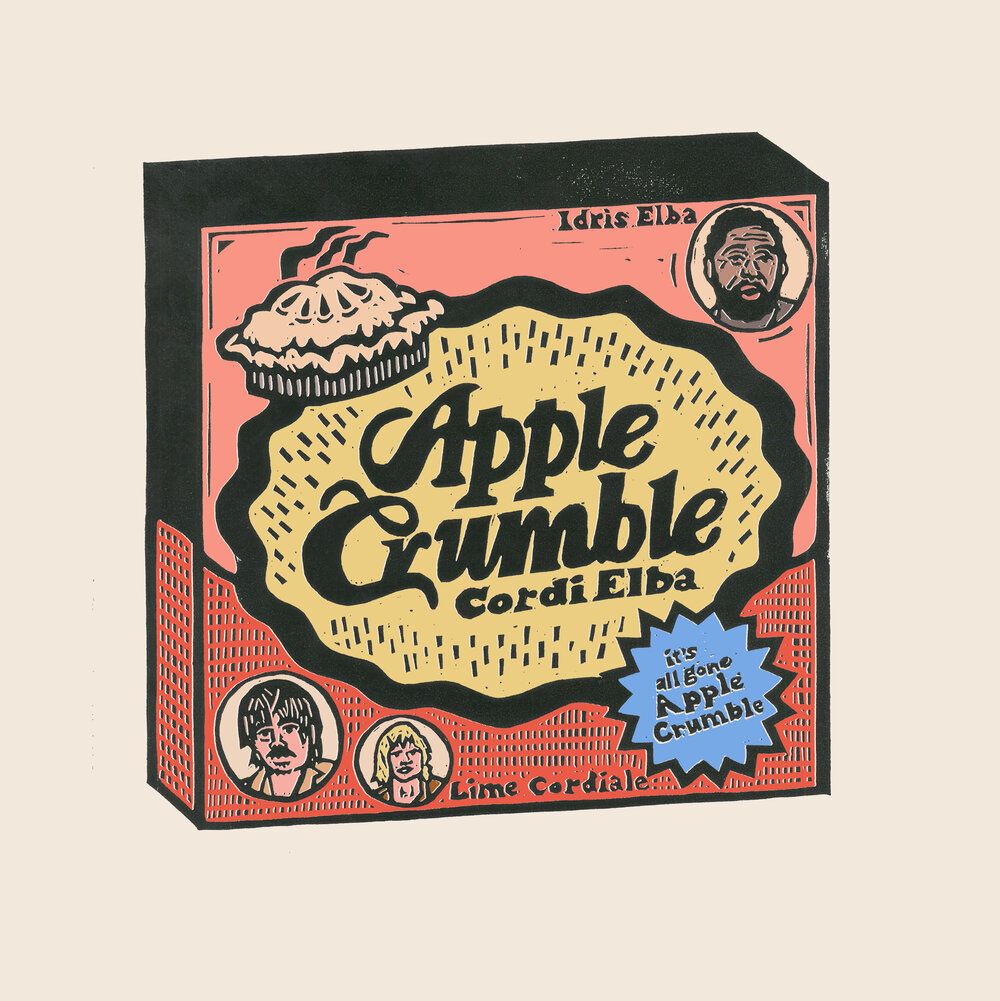 So, your mini album with Idris Elba entitled Apple Crumble – can you tell me a bit about how that initially came about?

Oliver: He was in Australia doing a film and we had no idea he was here. We mentioned to our publisher (who is a legend) that we were looking for a collaborator to sing on a song of ours called ‘Unnecessary Things’, and she was helping out Idris. The funny thing was, on that tour, we were hyping ourselves up before going on stage to Boasty which has got like Sean Paul, Idris and Wiley on – that was like our hype up song, and then our publisher came back to us and said, ‘Hey, Idris has heard your music and he really digs it and wants to jump on a track.’ We were like sh*t, yeah! We ended up going straight into writing just from an idea that he had put together in his little trailer on a movie set, so yeah that’s how it happened. He used up his last two months in Australia mostly with us, so I feel bad for the film director, he probably hated us.

It’s unlike your music or his – it’s quite a new sound for you all. Was it refreshing going into that without any predetermined genres?

Oliver: I think it gives you an excuse to do something different. If we just made a hip-hop song it would shock our fans too much to have that big shift, because we don't really do that kind of stuff regularly. It gave us permission to do something completely different which we sort of wanted to do.

Louis: He's always done the hip-hop or house stuff before, but this is the first time he has been forced to sing because at first, he was a bit hesitant.

Could you get the sense from working with him, that he was new to it?

Oliver: When he first came, he was a bit nervous which is weird to see because he's so confident on camera, but I think he just felt a bit out of his element and after a while, we sort of got the message that he really does like to be out of his comfort zone. I think he does that a lot and since following him more closely and being in touch with him, he's constantly like yeah ‘I’m doing this’ or ‘I wanna try this’ and all of this kind of thing, so I think he's into trying to further himself to the next thing.

Going onto the band’s artwork and album illustrations, I understand that these are created by you Louis – did you have any inspirations behind the band’s image?

Louis: I studied fine art at uni, and I was doing something completely different. At the time, we couldn't afford an artist, so I sort of got roped into it to start with. I did feel out of my depth at first, but I’m definitely growing with the band and as an artist. I mean I wouldn't call myself an artist but…

I think you should.

Louis: Well, I’m someone that does art and I'm learning and exploring it. I’m enjoying it a lot more now. With the Idris artwork, it was pretty cool. 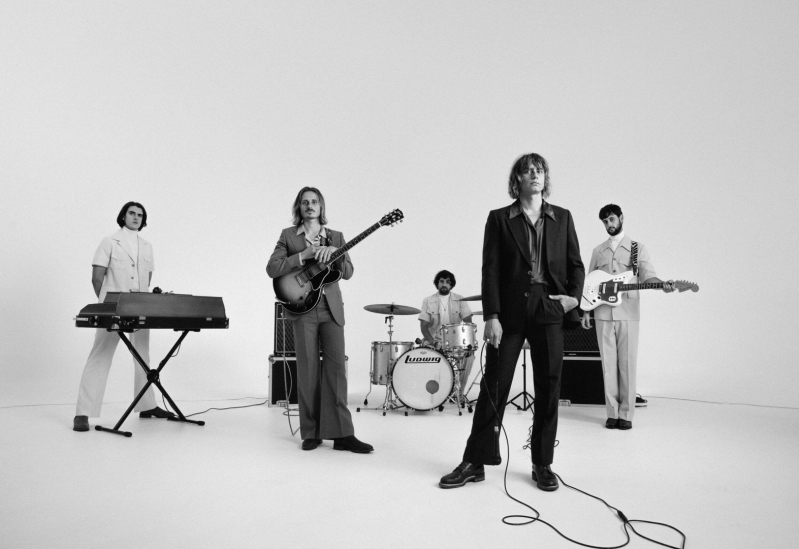 Yeah, that’s what I was going off; the more recent stuff – the Idris artwork was so out there!

Louis: The whole record has this space theme, I don’t know why but there’s a lot of mention of space in the record. I drive this old van with a bed in the back it’s a pretty grotty van and when he was coming into the studio one day, he took a photo of my van because it’s got this hula girl on the front on the dash and he really loved it. He was like, ‘this should be the cover.’

Going back to where it all started, was it always a musical household growing up?

Oliver: It was. Are you in Oxford? Because our mum grew up there. She's a cellist and it wasn't an option for us to not play music with her in the house. I remember I once pretended that I was going to quit clarinet and she gave me this look and I was like ‘kidding!’ I was just testing the water. Our dad managed us back in the early days as well, so they were always very supportive. I think if we told them we were off to go work in banking they would be furious.

If your mum grew up here, does that mean you’ve been to Oxford a lot?

Oliver: Not loads. Our grandparents were in south Devon on the rocky cliffs - that was pretty cool but they’re in Cambridge now, so we mainly go there or London. We haven't been to Oxford in a little while.

Louis: I think Idris lives in Oxford so he said we should come to visit – stay on his couch.

Did you have any early musical influences that you can see going into your work today?

Oliver: Reggae-soul and surfy stuff was kind of the music we grew up on at the beach, and we still live on the beach so you always want chill stuff you can just put on. Australian music is definitely super judgmental as well which I think is probably a good thing. If you write something and it’s too ‘in your face’ people cut you down. Tall poppy syndrome.

Louis: Is that a term in England?

No, it’s not, I nodded but I have no idea what you mean.

Oliver: Tall poppy syndrome: if you’re a poppy that’s sticking out, you get cut down. That’s very much the theme and I think sometimes we feel our music is a little bit out there and then we always seem to get away with it.

I understand that for you guys, sustainability is really important to you, and it’s incorporated in everything you do from what you eat to what you wear. What are your top tips for thrifting?

Oliver: I feel like in the cities, they put things in the thrift shops that they think people will want so the hidden goodies go missing, I don’t know where they go.

They get taken to Vintage shops and doubled in price.

Oliver: Probably yeah! When you go into a thrift shop in the country it’s just a mess and there’s no order and that’s the fun.

You have to be determined. You guys are vegan too, aren’t you?

Oliver: We’re veggo, but yeah that’s also a sustainability thing. I think it’s more about eating good produce, to be honest rather than if you eat meat or not because there are a lot of unhealthy vegans and vegetarians out there.

People think that vegans just eat veg, but you can be vegan and have a completely beige diet.

Oliver: Yeah, you can eat pretty unsustainably as well as a vegan, so it’s just about knowing where things come from. We’re putting on a festival soon and we want to make that pretty carbon-free – as much as possible. It’s hard though because a lot of people in this industry are always pushing back, and they just want to make money. It’s getting cooler to talk about it as well – if you were like ‘I’m a greeny’ a while ago, people would shut you down.

Do you have a favourite veggie food?

Oliver: I think Indian food, in general, is our favourite. I was chomping on a few passion fruits the other day as well, they’re pretty amazing. And kiwi fruits – you cut open a kiwi fruit and it’s like, what the f*cks going on there? I watched a TikTok where someone was picking and cutting open a dragon fruit the other day.

I wouldn’t even know how that grows?

Oliver: Have you watched Squid Game yet? I haven't started it but everyone else has so I’ve got no one to watch it with now.

Oliver: I’m reading an Australian book called All Our Shimmering Skies by Trent Dalton. Audiobooks as well – how good are they?

Lime Cordiale will be coming to O2 Academy in Oxford, 25 January