The Art of Perception

Cooking From the Heart

Kieran Stiles, an artist based in The Cotswolds, explores the concepts of visual perception through drawing and painting, and asks whether we see reality as it really is or whether we build our own vision of the world.

Inspired by the land, sea and sky, there’s a tranquillity in Kieran’s paintings, a stillness and a strong horizon, to which he adds style and frenetic strokes of colour and movement. These give vibrancy and freshness, as if the wind has blown away any cobwebs and the sun has just appeared from behind a cloud lighting up the landscape. Soaring colours add strength, power, and soul: his pictures have an inner poetry, a staccato rhythm and a pleasing harmony. An apparently haphazard freedom disguises careful consideration and structure behind his style. It’s a skilful balance that makes the bold and beautiful colours sing out with rich measure.

Explaining his multi-layered methodology, Kieran tells me that each picture is made up of many single-moments experienced superimposed together rather than a single view, an approach which deliberately reflects the way we view the world biologically. This gives each expressive yet modest painting a meditative quality, the compilation of these moments inviting the viewer to consider the reality of how each of us experience our surroundings. 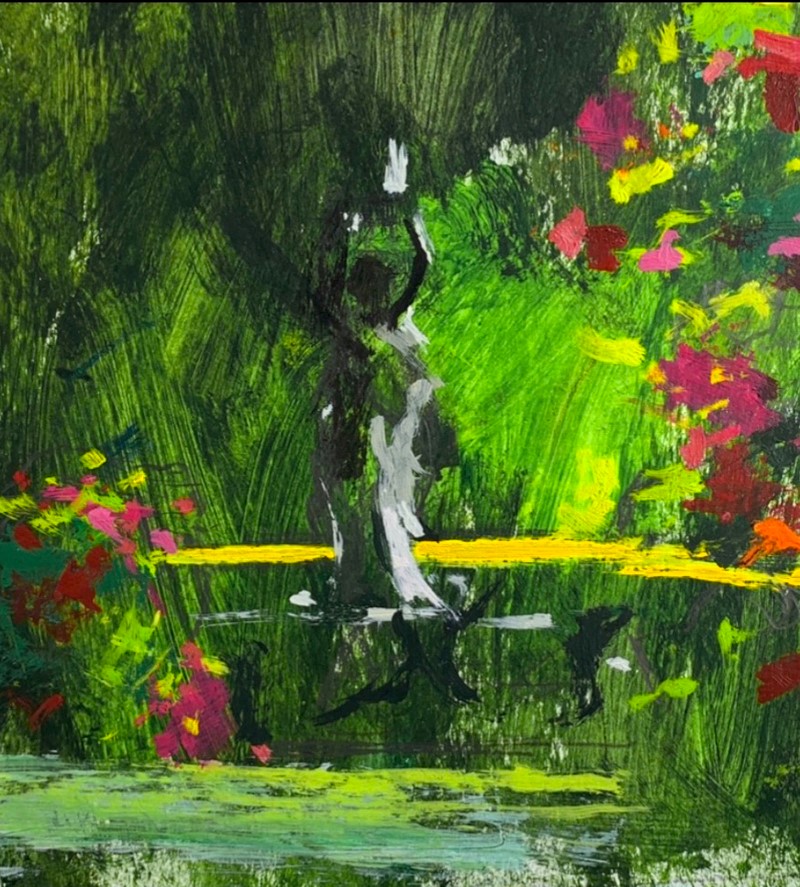 “Light can’t go around corners, and it is the tonal contrast between light and dark that tells the brain something is three dimensional,” Kieran explains. “What we think we see is a construct of our minds, a combination of the messages the brain receives from all our senses. The eyes are not like the lens of a camera – they don’t stay steady. They flicker and jump around several times a second and our mind pieces this information together using the light, colours and shapes in front of us – and sounds and scents too – drawing on the knowledge and assumptions we already have. Consider looking, for example, at the areas between the main elements in any famous painting – did you truly see, or just draw inferences from the background items without realising that they were there?”

When Kieran looks at the landscape in front of him, he notices each flash of colour in his peripheral vision – be it botanical, a colourful vehicle driving by, or something to hand that catches his eye as his head turns. This lifts the scene for a fraction of a second and so, exploiting the hierarchy of what the eye picks up or subconsciously ignores, he overlays and incorporates those instantaneous and individual moments into his painting. It is an intriguing thought, and this approach gives his work an abstracted quality through this subconscious process rather than by deliberate design. Each finished ’view’ is actually an amalgam of its periphery crowding in, showing the artist’s whole field of vision rather than a narrow focus on the landscape beyond the easel.

Although created with this experimental approach, the scenes Kieran paints are always clearly visible and at this month’s Open Doors event, visitors to Merton College will have the chance to see Kieran’s latest series of work created at the college as its Visiting Research Fellow in the Arts, a position in which he considered questions of perception with multidisciplinary researchers in nature and neuroscience, psychology and philosophy.

“I love nature and I have always worked outside whenever I can, and I have been very fortunate to spend the summer at Merton College exploring the idea that our internal creativity means we all see things differently. The college gardens running down to the Thames are beautiful. They’re accessed through an old gate, just steps away from the bustling High Street. It’s a hidden oasis of tranquillity; a mini-paradise. I’ve been immersed in this wonderful natural world, often taking my easel up onto an elevated terrace on the south side where there’s a panoramic view over Christchurch Meadows, across Dead Man’s Walk.

“This walkway was apparently the route of medieval funeral processions heading to the Jewish burial site in the Botanic Gardens, and because of the long wall that offers shelter, Merton Gardens have lots of exotic plants and rare specimens, some of which can’t be grown in the Botanic Gardens. There’s also a 400-year-old Mulberry tree that is said to have associations with James I – possibly left over from his failed attempt to start a home-grown silk industry in the seventeenth century.

“The flower beds are an array of joyous colour – vermillion, pinks and oranges one day, and then it’ll suddenly be different. There’s a constantly rolling botanical rainbow – as one plant dies back another bursts forth, so every day is a surprise. The studio where I work, engulfed by flora and floribunda, is tall, grand and rather eccentric. It was designed as an airy music room with high ceilings and has big Georgian sash windows all round it. There’s a striking double staircase that sweeps up to the giant doors giving it rather a Regency feel, so I am actually painting on the first floor surrounded by mature trees that rustle gently in the breeze. It’s a magic spot.”

Kieran’s work uses colour imaginatively and experimentally to capture the feelings a place evokes, so it is no surprise his bright and inspiring tones stimulate these emotions and sensations. And Kieran is fascinated by synaesthesia, a neurological trait in which senses normally disconnected from one another merge together, meaning the stimulation of one causes an involuntary reaction in another. Someone with synaesthesia might, for example, hear or smell colour, or see sound. Looking at Kieran’s paintings, one can almost smell the summer and hear the birdsong.

Merton College is open for Oxford Open Doors on Sunday 15 September 10am-5pm when you can visit Kieran in the studio and see the college gardens. Over the weekend, a whole host of other Oxford venues normally closed to the public are also open for free.

If you find synaesthesia fascinating, expert Julie Simner presents her new book Synaesthesia: A Very Short Introduction during next month’s IF Oxford festival of science and ideas, as part of ‘Speed Dating for Ideas’ event at Waterstones (7pm Thursday 24 October). Booking recommended at if-oxford.com