The Art of Words

Imogen Foxell is a lexicographer for Oxford Dictionaries and an artist and illustrator. Her art combines her love of words and literature with her love of drawing.

Reading classics at Wadham, Oxford, Imogen’s studies encompassed literature, history and philosophy, as well as linguistics, by which she found herself particularly fascinated. This led her to the dictionaries department of Oxford University Press where she has worked on English, Greek and Latin dictionaries, and where she now edits online dictionaries in a wide variety of languages, from Bangla to Zulu.

She began illustrating interesting words from the Oxford English Dictionary (OED) several years ago. “I choose from the ‘words of the day’ that have been selected by OED editors for a variety of reasons, such as an interesting etymology, a surprising history, or just a pleasing sound. The first one I did was oneirocriticism [‘the art or practice of interpreting dreams’]. I choose one a week, and my illustrations go online on the OED Twitter feed.

Some of the words I’ve chosen are very old, such as lovewende [‘lovable’ or ‘lovely’] which was last used around 1225,” she explains, “whilst some are more up to date, such as ansible [‘a device that enables instantaneous communication over any distance’], coined by science fiction author Ursula K Le Guin in 1966. Nearly all are obscure to me, so the exercise has been very educational, though I have rarely had the opportunity to drop callithumpian or ommatophore into casual conversation.” (Callithumpian is used to describe a group making a loud and discordant noise; an ommatophore is a tentacle with an eye on the end.)

“For the drawings themselves, I see where my mood and imagination take me. Sometimes I just aim to create an attractive image, e.g. for ablow [‘blooming, full of flowers’]. Sometimes I attempt to present an amusing take on the word or suggest a story. A favourite is acnestis, which is the bit of your back that you can’t reach to scratch: I’ve shown a cross cat trying to reach its itchy spot. Everyone loves a cat picture!

“Using the words of the day is good fun as an artist because I get to play around with text and pictures in a variety of styles, and I am challenged to draw things that wouldn’t have occurred to me otherwise, from alchemical laboratories to underground governments. I still need to draw something beginning with Z though. Maybe zamzawed, a Devonshire word meaning overcooked.”

Imogen’s other art is also inspired by stories and literature. She has recently been working on light-hearted illustrations to go with classic texts – such as Romeo and Juliet, Macbeth, A Christmas Carol, and Arthur Conan Doyle’s The Sign of the Four – for a series of revision cards for students (with author Philippa Helliwell). And after reading Mansfield Park she added a quirky twist, depicting the heroine Fanny Price as a killer robot for a bit of fun, along with Jekyll and Hyde and Tolkien’s Smaug. This picture ended up in the Bodleian Libraries’ 2017 Jane Austen exhibition, much to Imogen’s astonishment. “That was a surprise hit.”

Back when she was doing her master’s degree, Imogen chose to study the epic Latin poem, ‘Metamorphoses’, by the Roman poet Ovid. “He linked all the classical myths you know with lots you probably don’t. It is all about change and transformation. It is full of bizarre and magical episodes where people are turned into birds, animals and trees – it’s a world where anything is possible. One day, when I feel ready, I hope to do a suitably epic illustration of it.

“Ever since I was small I have loved fairy tales and folklore, and so I enjoy illustrating these, combining my interest in the past with language and visual imagery. Some of my favourite books as a child were collections of myths and legends with wonderful pictures which were integral to the reading experience, capturing the time, place and mood of the narrative. For example, Alice and Martin Provensen’s pictures for The Golden Treasury of Myths and Legends and Michael Foreman’s for Madhur Jaffrey’s Seasons of Splendour. It is a gift and a challenge to an illustrator to imagine these stories anew, and to make them appeal to readers of all ages, just as the original tales told orally through the generations have done.

“Right now, I’m exploring children’s book illustration, continuing to focus on intricate fantastical scenes. I’ve been learning a lot about the children’s book industry from a course run by Oxford’s own Korky Paul (illustrator of Winnie the Witch) and from the Society of Children’s Book Writers and Illustrators (SCBWI). When illustrating children’s books, you have to think beyond the individual images and consider how they fit with the words, and how the story should play out over the standard 12 pairs of pages.”

Another of Imogen’s recent projects has been to reimagine medieval books through her art, in connection with the Bodleian’s Designing English exhibition. “I love that the illustrations in medieval books are not necessarily realistic but are evocative and charming. And there’s lots of gold leaf. Gold leaf makes everything better.” Based on a medieval manuscript which described seasonal labours and what would happen each month if it thundered, Imogen designed a medieval board game which dramatised the text. “If it thundered in May, apparently your crops would fail. If it thundered in August then the state would fall,” she explains. “If it thundered in December, though, you’d have an abundance of crops and a good Christmas dinner. The book had small simple icons of bread and trees and pigs, like medieval emojis, which amused me. Playing a good board game means you can take a personalised path through a story, with luck and risks along the way and an unknown ending. I’m similarly interested in illustrated maps, which again allow the reader to trace their own route through a story.”

Imogen’s work moves through a range of styles. Her illustrations of words tend to be more fun and light-hearted with loose lines and a cartoony freshness reminiscent of Quentin Blake, and people can instantly relate to them. Other work is rich with details, and intricate fiddly patterns that take much longer to draw. She typically uses ink and watercolour, with a focus on tiny details perfect for the pages of a book rather than as art for the wall. “If you look closely, the pictures in beautifully illustrated books are full of treasures, from decorative borders and patterns to miniature extras that enhance the narrative. When I draw, I am presenting the world not in a literal way but almost with the perspective of someone high above, as if the reader is opening a doll’s house and finding a whole world laid out inside, packed with miniature places and people. 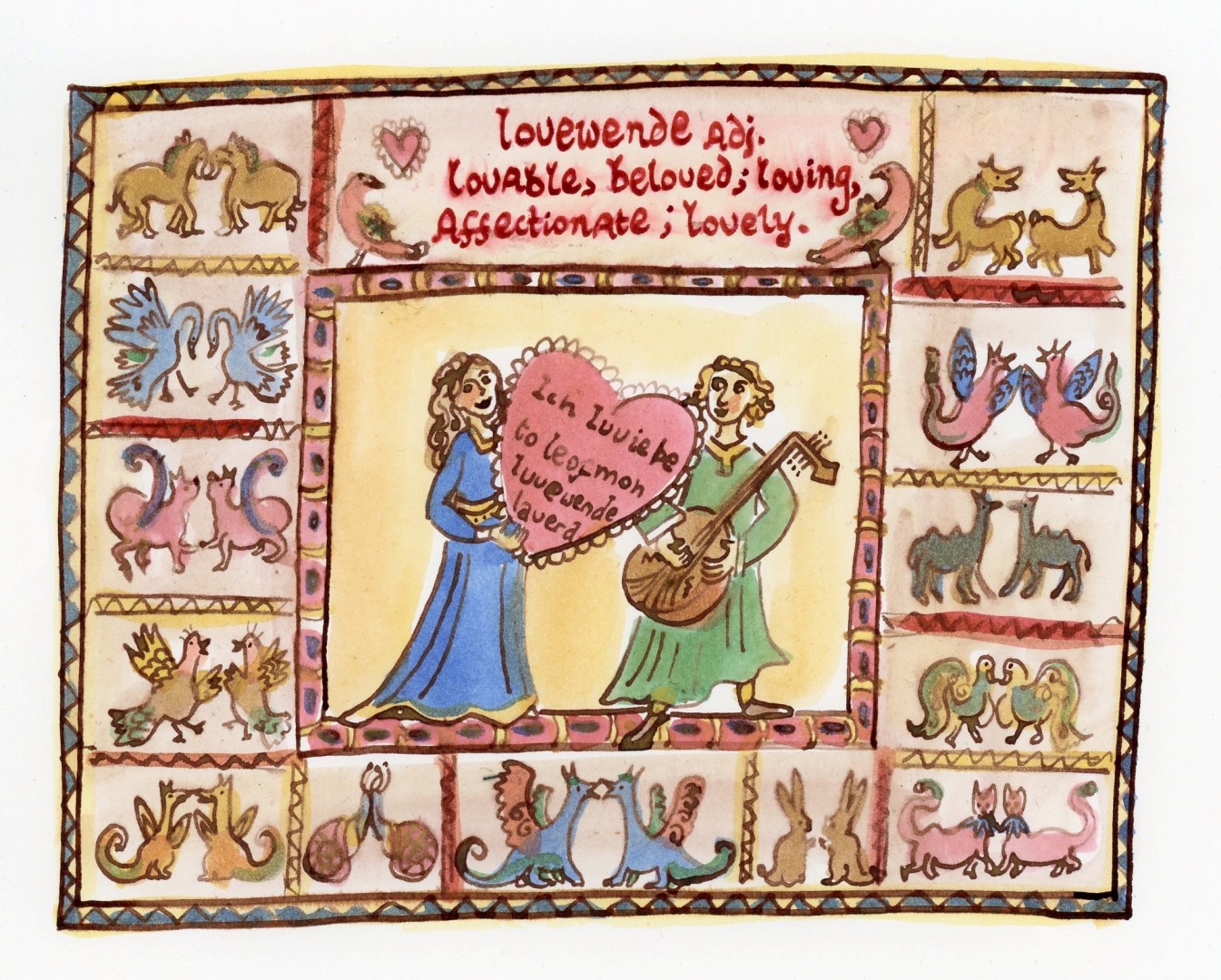 “I’m very lucky to live in Oxford, and spend a lot of time sketching bits of the city. I love its gothic architecture. My dad is a modernist architect, who designs a lot of geometrical buildings full of concrete and glass. So when I moved here from London where I grew up, that was my small act of teenage rebellion.” There’s probably a great obscure word for that, just waiting to be illustrated.