“All too often women find their identity and self-esteem drains away over time, they begin to lose their sense of self and are defined as someone’s wife or known as the mother of their children”

In the beautiful Cotswold village of Chadlington, three Oxfordshire Artweeks artists talk about their very different interpretations of the human form.

Myrica Jones’ large figurative ink drawings are themed around the tension between weight, constraint and power. Each is drawn with controlled precision in a single colour so it is almost as if they have been etched, and the resultant pieces – both animals and people – are sculptural, crisp and impressive. The strength of colour, where the lines are denser, illustrates where there is tension and force in the figure’s musculature.

“I based my original sketches on my teenage son who was a somewhat reluctant model but whose stature was the perfect starting point from which to begin,” smiles Myrica. However, presented on paper 150cm tall, the life-size characters are unidentified, a ‘universal person’ who is very human: whether lying down, in despair or pushing at the edge of the paper, each has a sinewy energy that seems Herculean.

“My daughter has been affected by persistent migraines with other complications and the intensity of her experience, the frustration and turmoil, and that sense of being trapped and punished by one’s own body was part of my inspiration,” she explains. “I found myself playing with the idea of a figure trying to escape the constraints of the picture in which they were expressed. I chose to do away with any background and use the grading of the depth of colour to enhance this sense of intensity. Restricting myself to either just blue, black or red helped convey the sense of struggle and I chose to use classic Bic biro pens, as a nod to the everyman nature of the work. I’m saving the used-up pens and one day I’ll make a sculpture from them.”

Yet whilst the figures in Myrica’s monumental and compulsive pictures appear to be battling a seemingly impervious force, there’s hope too: you can imagine them breaking free and stepping, perhaps in fine wire, from the paper. 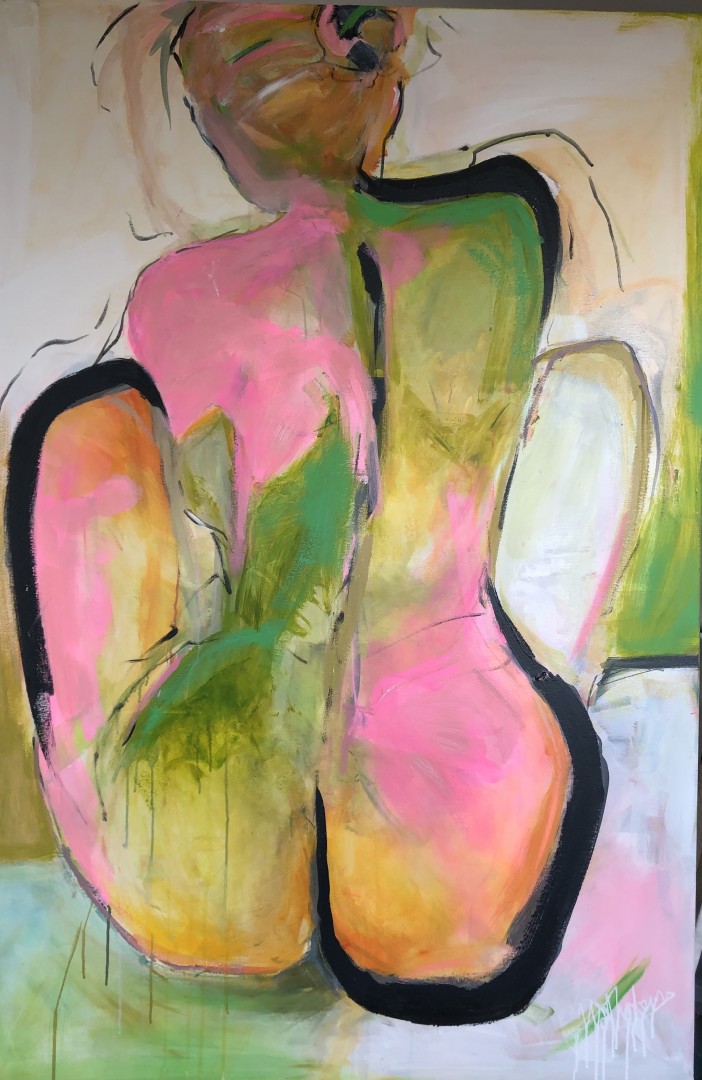 Maureen Thorburn’s art is equally big and bold, her statement pieces pushing the boundaries by stripping back the female form to its core. “I am interested to see how much of the detail and context you can strip from the female form and which key elements I can leave out whilst leaving her instantly recognisable as a woman,” she says. Inspired by the simple smooth curves of Henry Moore’s figurative sculptures, Maureen’s subjects exude a powerful femininity, communicated almost topographically with free-flowing brush strokes with gently distorted curves. “I like to push a woman as far as possible.

“I choose eye-catching colours and pigments so that the women stand out; all too often women find their identity and self-esteem drains away over time, they begin to lose their sense of self and are defined as someone’s wife or known as the mother of their children. It’s something I relate to and I enjoy showing each woman in their own right. I thought I’d find, over time, that I would become tired of the female frame but however many I draw, I never see two women the same and they are all beautiful whatever their shape or size.”

Jill Colchester is also drawn to the economy of minimally drawn and painted nudes, sparse in appearance, and paired with mark-making, rich in tone and vitality for which she uses materials that easily glide across the surface, that can smudge, cover and be covered to add dynamism.

Having trained as a dancer Jill has a lifelong fascination for the body and is particularly drawn to the lightness of being, of fleeting movement and grace, elusive qualities she emulates with dynamic lines focused on the female form. Her drawings are loose, minimal and essential, underpinned by exuberance and vivacity. “I love to capture the feeling of dancing fully stretched, off the ground and in the air and that feeling of being fully alive,” she explains. 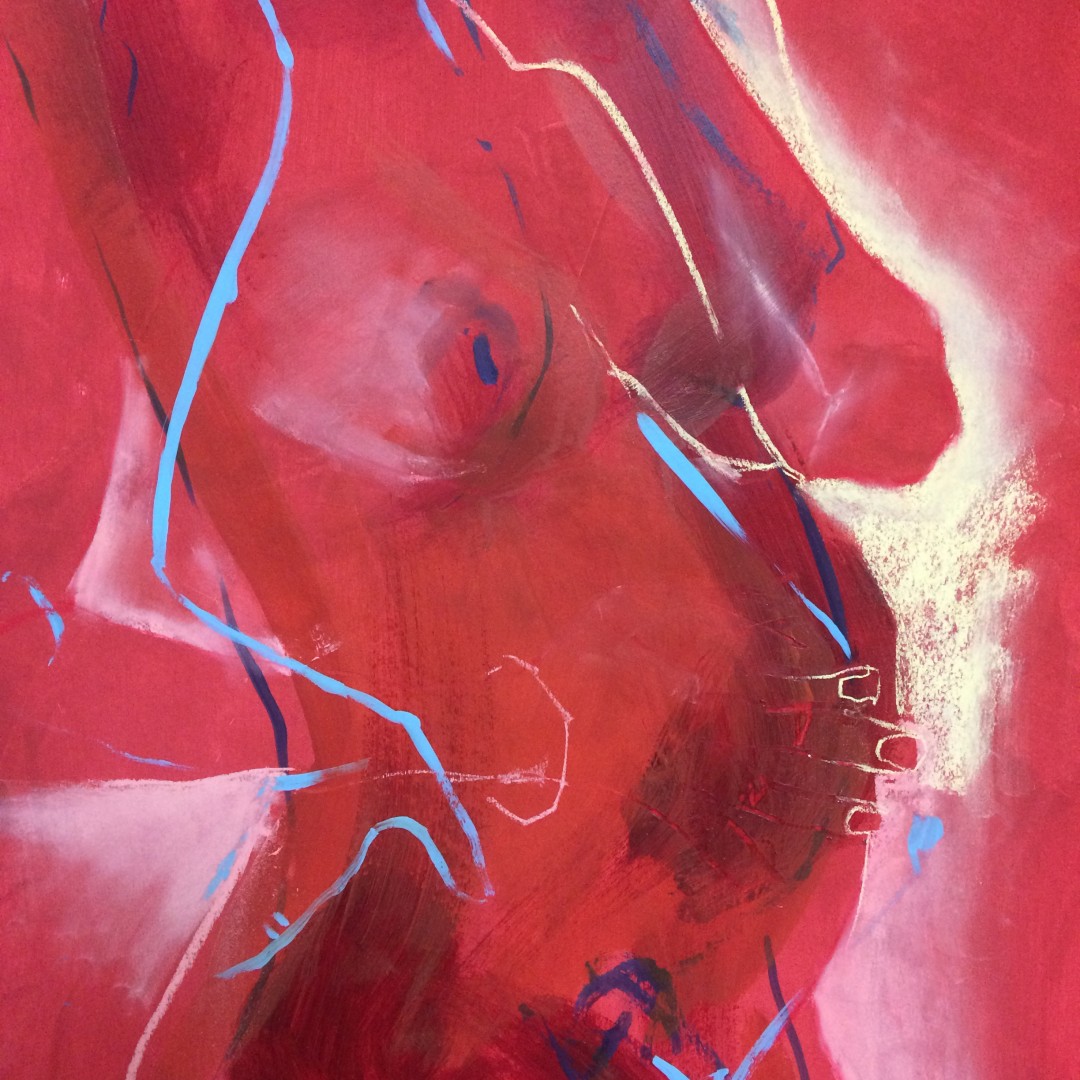 Her models are usually moving, holding a pose for only a moment or two, stretching from one supple attitude to another at will. Because of this unknown time constraint, Jill works intuitively and gesturally as well as minimally, which adds dynamism to her lithe figures: drawings and paintings of poses are laid over each other, challenging the viewer to see the subject this way and that.

In previous figurative pieces, Jill used both thick and thin lines, reducing the line to an elegant simplicity: the paring back, and the stripping out of any colour and shading, amplified the person and poise portrayed. Some of her drawings also celebrate the beauty of pregnancy in a striking red whilst in her latest series of contemporary nudes, Barely There, one artwork for example shows a female figure drawn with a single black line. 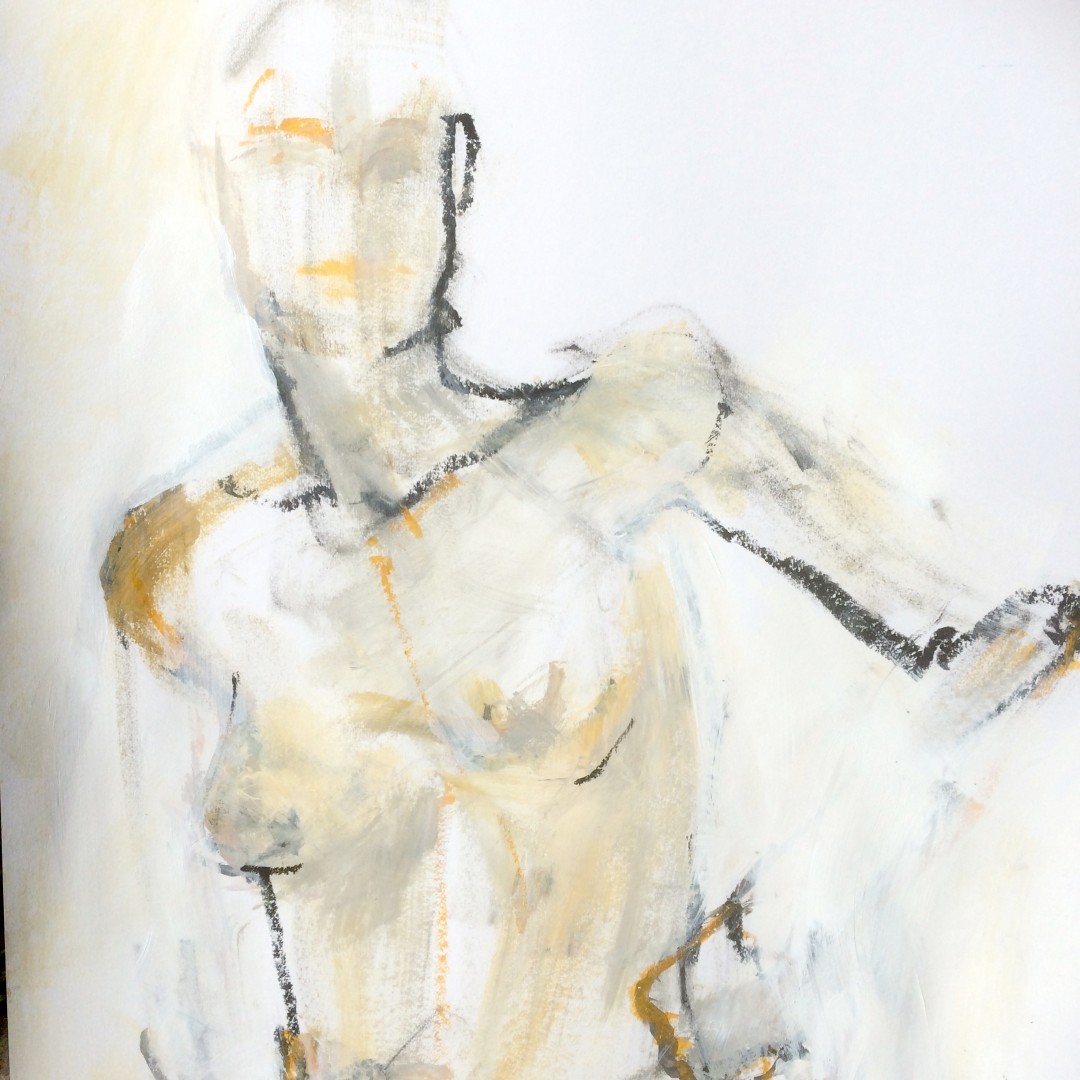 “I have been considering how little information is needed to be able to read the marks on a page as a figure or a face,” she says, “how few dynamic lines can portray the pose the model takes or how few paint strokes will show the curves and shadows of the body or face. This exhibition is also about the brevity of the pose, about the relatively short amount of time – or so it seems to me – when one has the bloom of youth, as well as the reduced marks needed to portray the form. These nudes are both ‘bare’ and ‘barely there’!”

Her most recent paintings, first shown in Berlin, are alive with delicate buttery skin against elegant black ink outlines, their postures hovering between self-confident and bold or provocative, and there’s a power in each’s unapologetic gaze where it meets the viewer’s.

This year the annual Oxfordshire Artweeks festival (2-25 May) has been restricted by coronavirus to a virtual presence: visit artweeks.org and follow #oxfordshireartweeks on Instagram to enjoy the creative talent of these and hundreds of other artists and designers this summer.