The Perfect Place to Exhibit Art in An Intriguing Garden

“The installation of each work is an art in itself”

The quintessential Oxfordshire village of Asthall, with its range of old Cotswold stone properties, is just 3 miles from Burford and 6 from Witney and is easily accessed from the A40. As you head down towards the village, you feel that you are heading back in time leaving the hustle and bustle of modern-day living behind you. 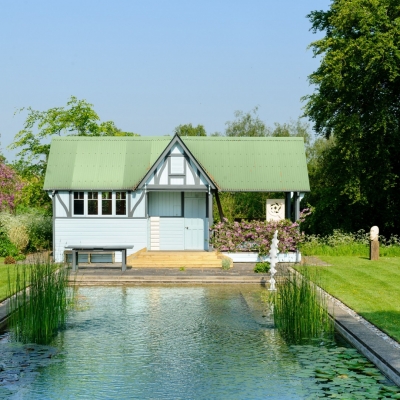 The Jacobean Asthall Manor enjoys an elevated position with sweeping views over the church and the tranquil Windrush valley, with the river gently meandering through the landscape. The first feature to be aware of as you approach the property is the intriguing stone sculptures commissioned by the Manor’s owner Rosie Pearson and created by Anthony Turner in 2000. The pumpkin-like finials adorning the top of the Manor’s entrance gateposts give the visitor a clue to what you may expect to see during the on form unlocked sculpture exhibition held around the property.

As you enter the sweeping driveway the atmospheric Manor House, dating back to the early seventeenth century, sits in majestic splendour. The old tithe barn to the left of the house was converted into a ballroom/library and linked to the main house with a cloistered walkway by Lord Redesdale, father of the infamous Mitford sisters who owned the property in the early 1920s. Asthall Manor, as well as Redesdale’s other properties, inspired Nancy Mitford’s book ‘Alconleigh’. Sold in 1926, the Manor then remained in the Hardcastle family’s ownership for 71 years before Rosie Pearson purchased the property in the late 1990s.

Taking on both the restoration of the house and garden, Rosie’s friends suggested she seek the assistance of leading garden designers and builders Isabel and Julian Bannerman. The Bannermans had a vision for the redesigned gardens to flow into the Windrush Valley and the landscape beyond it. With formality close to the house with unusual shaped clipped yew structures and a crisp box parterre, the garden becomes less formal as you explore the upper terraces and take the leisurely pathway around the grounds. Although the swimming pool pavilion is a copy of a 1920’s style cricket pavilion which is now in the walled garden, this part of the garden gives an image of what life at the Manor was like in the roaring 20s when Lord Redesdale’s children lived at the property.

The gardens at Asthall Manor provide the visitor with much to look at. Not only is the surrounding scenery spectacular, but the way Head Gardener Owen Vaughan prunes the roses in the beds and on the walls of the house using the entwining Asthall method is totally inspiring. During the summer months, this extra-ordinarily sculptural way of growing the roses and entwining their branches produces an abundance of flowers. In the winter, the web of leafless branches creates living sculptures throughout the garden. Other shrubs have also been pruned and trained in a similar fashion. 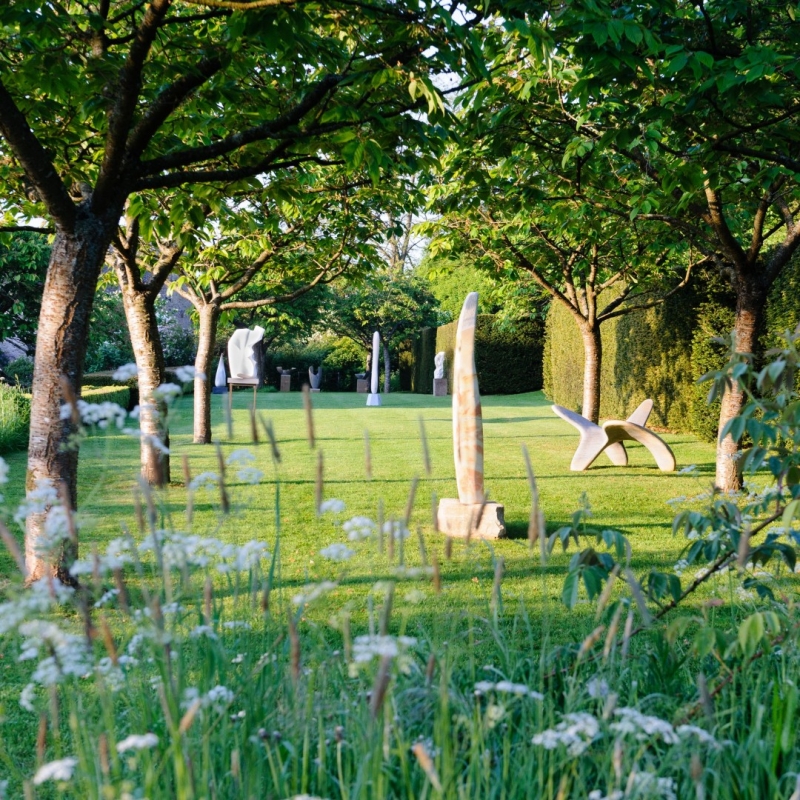 The installation of the unusual stone gatepost finials, back in 2000, was the starting point for Asthall Manor to become the perfect showcase for a range of contemporary stone sculptures to be exhibited in parts of the house and all around the garden for visitors to enjoy. Some two years later, the first biennial on form exhibition was held with Rosie taking the lead in organizing it. However, in 2006, art consultant Anna Greenacre was appointed as curator of on form. Together Rosie and Anna have created an interesting art exhibition which draws about 10,000 visitors during the time it is open.

With the Covid-19 pandemic causing most events to be cancelled in 2020, an online version of on form was held instead with a range of contemporary stone sculptures on show. However, Rosie and Anna invited the 2020 exhibitors to be part of the event they were planning for 2021. With the title on form unlocked, this year’s event will run from Sunday 2nd May until Monday 31st May. Thirty-one sculptors will be showcasing their work with 230 pieces on display around the gardens and water meadows. Tickets can be booked online at onformsculpture.co.uk. 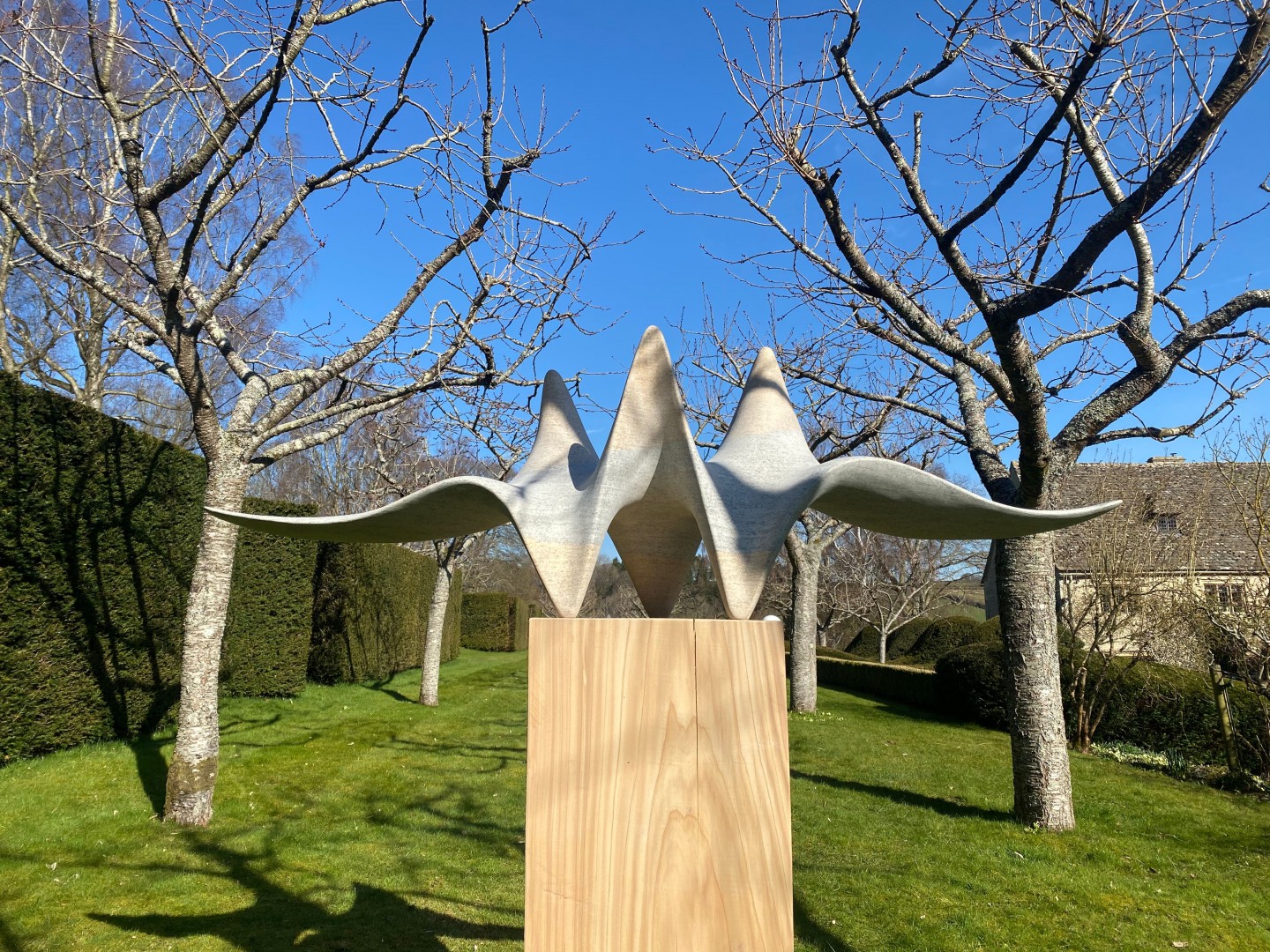 “This will be a different experience from our traditional mid-summer show,” Rosie explains. “It will be gentler and less busy, as befits the times we are living in, but as welcoming, inspirational and beautiful as ever. We had a successful online exhibition in 2020 but can’t wait to introduce this year’s extraordinarily good collection of sculpture in stone to the magical meanderings of Asthall.”

With works produced by sculptors from all over the country, the work of five Oxfordshire sculptors is on display. Emma Maiden creates hand-carved birds and dreaming heads using a range of British limestone which come alive when carved with their gentle colours, hidden shells and fossils which connect them to their geological roots.

Currently living and working in Oxfordshire, Spanish born Jordi Raga has worked on the Acropolis of Athens and Gloucester and Canterbury Cathedrals. He is fascinated by the natural world and enjoys exploring concepts and myths he finds within his own personal, social, and cultural experiences.

A member of the Royal Society of Sculptors, former greengrocer Tom Stogdon experiments with slate and the wearing influence of water. His artworks vary in size and stature, but all have a strong sense of calm. Using a combination of found and worked material, he uses water and abrasive to create shapes and textures on the stone.

Lucy Unwin creates abstract forms encompassing a wide range of subjects from the human body, organic forms, landscapes, and seascapes. Her work has been exhibited both in the UK and Sweden and she has sold pieces to both private and public collectors across Europe, American, and the Caribbean.

Experienced draughtsman, stonemason and restorer, Alex Wenham, creates pieces that are architectural as well as decorative. Having restored many prestigious stone buildings including St Paul’s Cathedral, the Houses of Parliament and the Louvre in Paris, Alex infuses modern with the medieval. For this year’s ‘on form’ he has created a series of sculptures featuring creatures both living and extinct.

All of the work is produced using a wide variety of stone, each producing different colours, textures, light reflection and the way they react to temperature. Installation of the pieces displayed around the grounds takes several weeks to complete and visitors will be able to explore following a Covid safe route.

“The installation of each work is an art in itself,” Anna explains. “We like surprises, so we try to create interesting juxtapositions. We have placed works set out on the lawns, where the sun casts dappled movement from the surrounding trees across the surface of the chiselled granite, honed marble, and limestone. Some pieces rise from the longer grass of the meadows, others are reflected in the still waters of the natural swimming pool or lake. We are hoping that people do come along and enjoy all we have to offer, and we are already planning the 2022 event due to be held 12th June to 10th July.”

Visitors will also be able to enjoy Asthall Manor's relaxing walled kitchen garden, currently home to the Potting Shed café. Here the acclaimed chef Fiona Cullinane will be serving her mostly plant-based summer dishes using seasonal produce from the Asthall garden. (The on form exhibition is closed on Mondays and Tuesdays except for Bank Holiday Mondays). 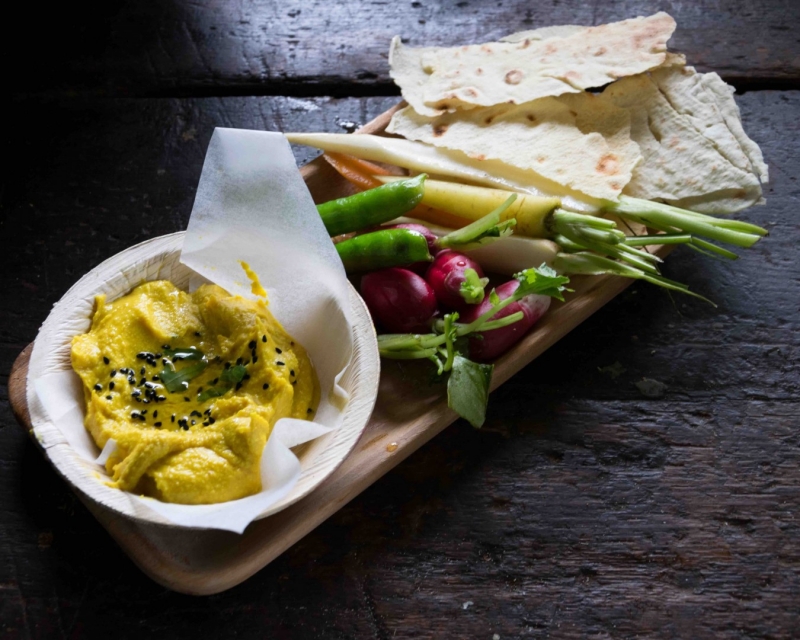 A visit to the Asthall Manor on form unlocked sculpture exhibition provides a wonderful chance to enjoy a stunning garden, unique stone sculptural artworks, the sound of the birds singing and the rustling of the trees as the breeze gently touches the leaves.

Online Talk and Q&A with Ashley Jackson and David Lough