Through the lens – Twitching around Oxfordshire

“As a consequence of lockdown, I now enjoy nature more than ever ”

Oxford may be known as the ‘city of dreaming spires’, but did you know there is also a wealth of green space including parks and gardens, and canals waiting to be explored in and around the county?

In the heart of Oxford lies the University Parks. A chance to slip away from the cars, taxis, buses, and shops into a green space full of flora and fauna. A couple of months ago, I decided to go for a walk – camera (and new lens) in hand, with nature photography in mind. University Parks is the perfect spot for some twitching and after a couple of minutes walking down the path, I look up at one of the trees. Something is moving: flitting up and down the tree trunk. I move closer, squinting and realise these quick, darting movements belong to a pair of nuthatches. A sharp intake of breath ensues, and I step off the track and into the flora. The two birds were more than happy for me to stand underneath them, camera at an acute, upwards angle, snapping away in some bizarre bird photoshoot as they glide between branches, hammering into the tree bark, searching for invertebrates.

People wander past me, probably wondering who on earth can take so many pictures of a tree, unaware of the true subjects of my focus: birds, not bark. Nuthatches have a penchant for appearing almost immediately on my walks and I’ve become used to spotting the unmistakable blue and orange hues, and thin black stripe running over its eyes, like a cool eye mask. 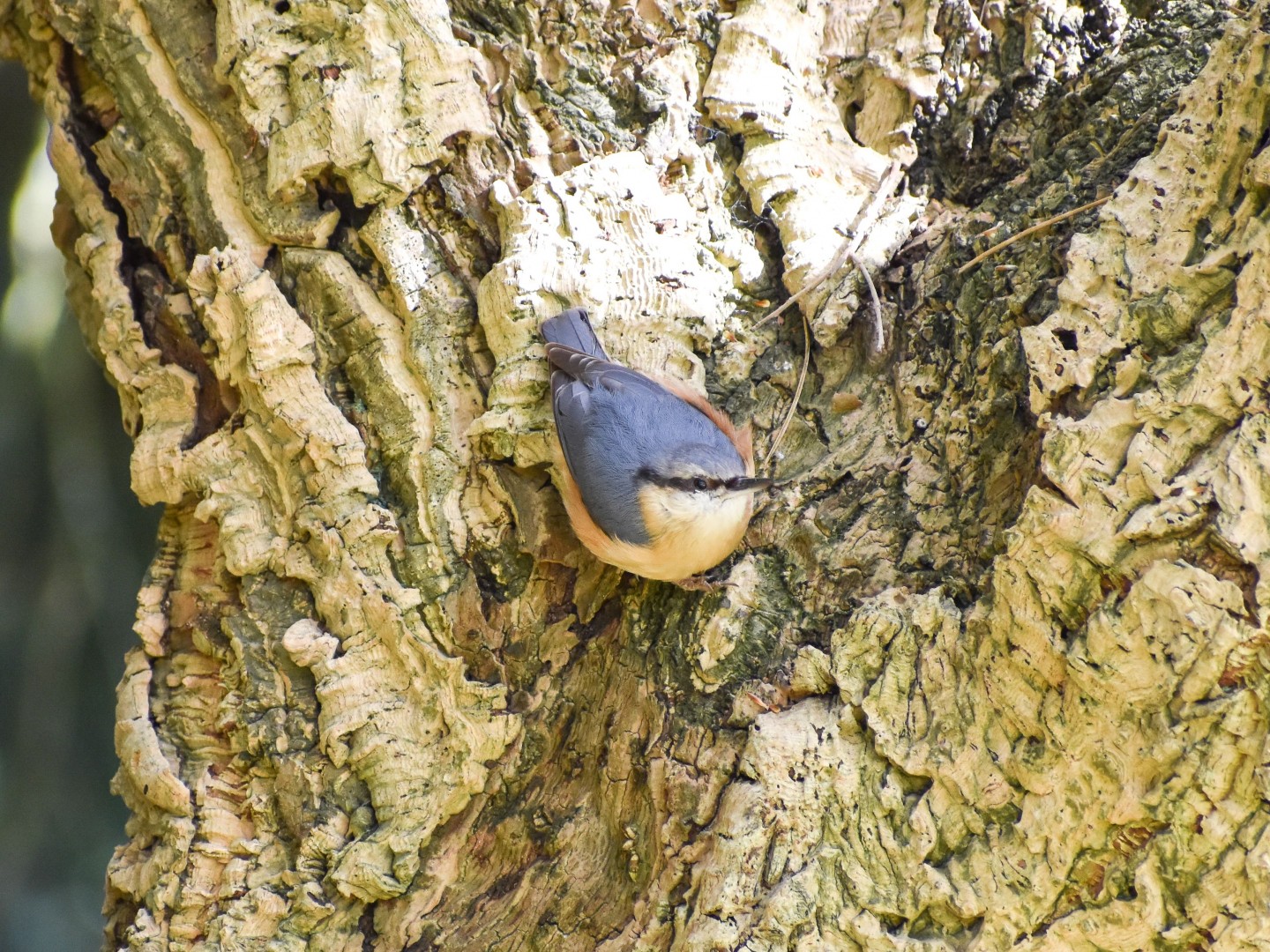 I move on, still celebrating my first bird spot of the day, wondering if my luck will continue. Resuming my walk, I join others on the path, occasionally going off-piste to photograph a flower or tree that catches my eye.

The ring-necked parakeet (the UK's only naturalised parrot) may be an unfamiliar sight in Oxford but these birds can actually be seen all year round, and are commonly found in South-East England, including Oxfordshire. Recent sightings of the ring-necked parakeets have been reported from: Iffley Road, Lower Shiplake, New Marston Meadows, and previous sightings have been noted in Banbury. On my wildlife wander through the University Parks I heard the birds before I saw them. Their call can only be described as a raucous, harsh shriek to the ears, alerting everyone and everything to their impending entrance. The two new arrivals perched high on the domineering trees by the duck pond, allowing me a few glimpses of their bright green plumages, almost perfectly camouflaged against the conifer-green of their chosen resting place. I managed to get a few shots of them pecking at the branches before moving on to see what else I could photograph. The site covers 74 acres and I was fortunate to add blackbirds, a blackcap, blue tits, Canadian geese, mute swans, a goldcrest, great tits, robins, a song thrush, mallards, and a treecreeper to my list of spotted birds for the day. Mission complete! 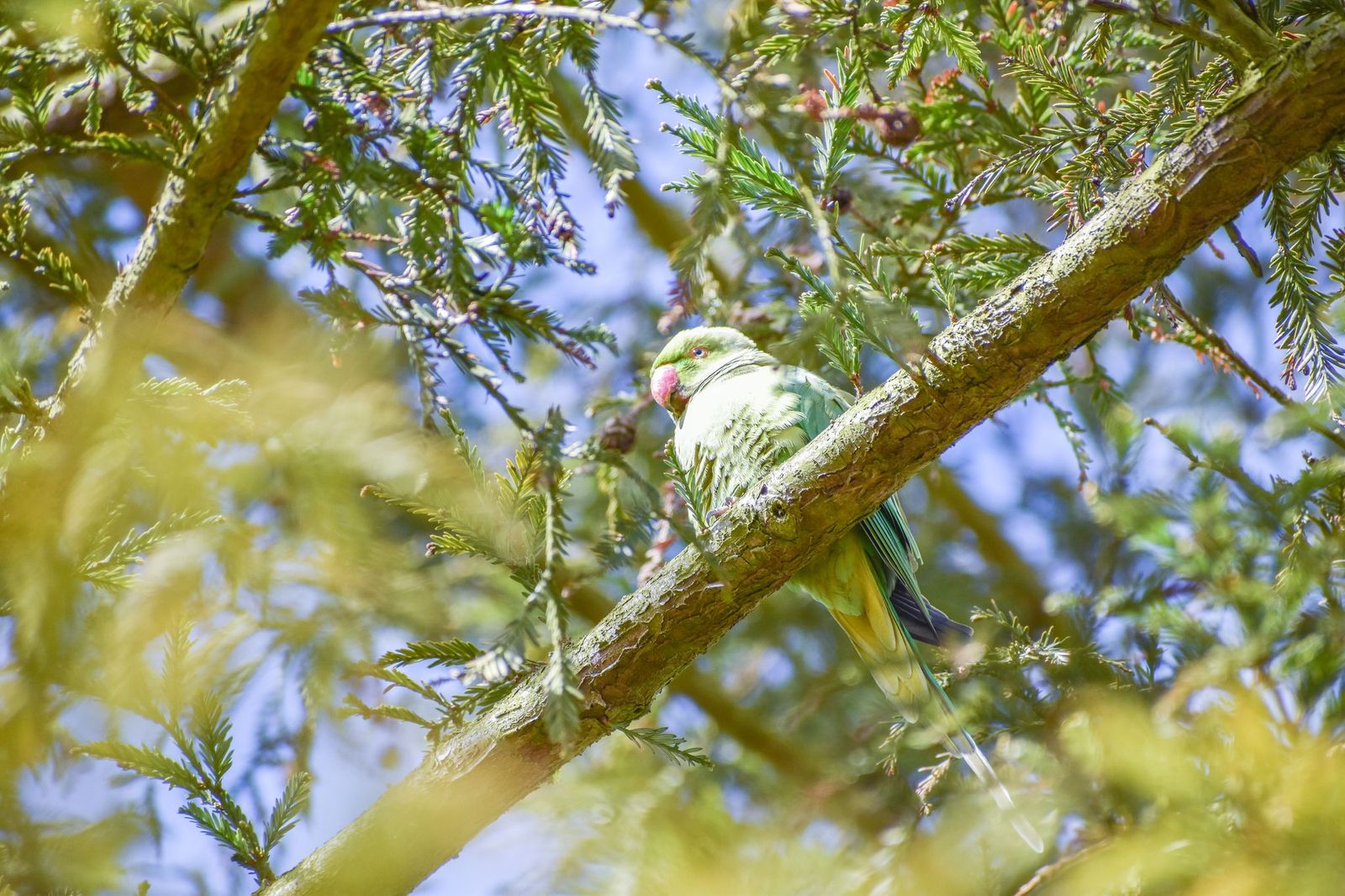 A stone’s throw away from my home in Kidlington is the Oxford canal. On my towpath travels, I have spotted a buzzard, blackbirds, blackcaps and blue tits, chiffchaffs, dunnocks, goldfinches and goldcrests, a kingfisher, mallards, pigeons, robins, swans, and wrens. There are a few well-placed benches along the route, and I would recommend taking a seat, closing your eyes, and listening to the noises of nature. Listen to the birds as they communicate with one another in their special language. You will likely hear more than one species vying for air space, each wanting to project their call for others to hear. Some birds such as blackbirds and dunnocks rustle on the ground, lifting leaves to find worms and other insects. Sometimes the quacking of ducks can just be heard. On a windy day, the addition of branches swaying to and fro, combine to create a perfect auditory experience.

One of my favourite birds is the wren. Weighing no more than 12g, its voice packs a punch with a call consisting of high-pitched shrills which can be heard from a considerable distance. I was on my return journey along the canal one evening, and my ears honed in on the unmistakable wren song. I moved closer to the shrubbery, squinting through the vast network of intertwining branches, thorns and leaves until I spotted the tiny bird, perched on the edge of a branch in full song. I zoomed in and snapped away. In my garden, the wren is a frequent visitor. Darting around on the floor, ducking under planters, and jumping into flowerpots, finding morsels to feed on. Other times it will appear at the very tops of hedges. Its claws help it to precariously perch on the most delicate of branches; its lungs at full capacity as it makes it wondrous call. 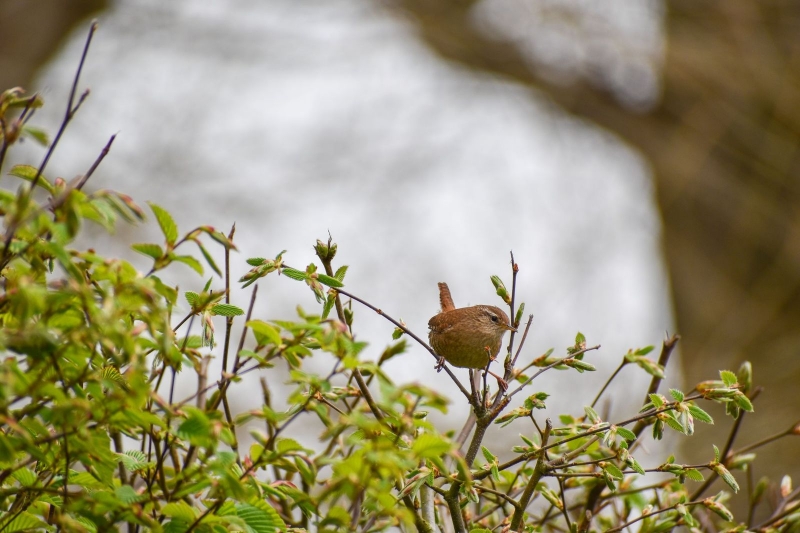 In the garden, I’ve seen around 18 different species of bird. The less common birds include blackcaps, who usually enter gardens during winter, and siskins, also frequent winter visitors in England. A great-spotted woodpecker even ventured onto the peanut feeder once, completely noiseless, compared to when it grips onto tree trunks, drumming into the bark to pick on wood-boring insects. As well as visiting local wildlife hotspots, I spend a lot of time photographing birds at home. As a consequence of lockdown, I now enjoy nature more than ever. Taking moments of peace as I gaze outside into the garden, listening for bird calls. Fortunately, well-established hedging and a plethora of trees attract some frequent, and some not so frequent visitors. One of the more colourful guests is the goldfinch. With its bright red face and yellow wing patch, it makes for a standout bird. Usually seen in small flocks, and on occasion, a solitary goldfinch will latch onto the suet feeder. However, it is not too long until one, two, or even three more will join it. 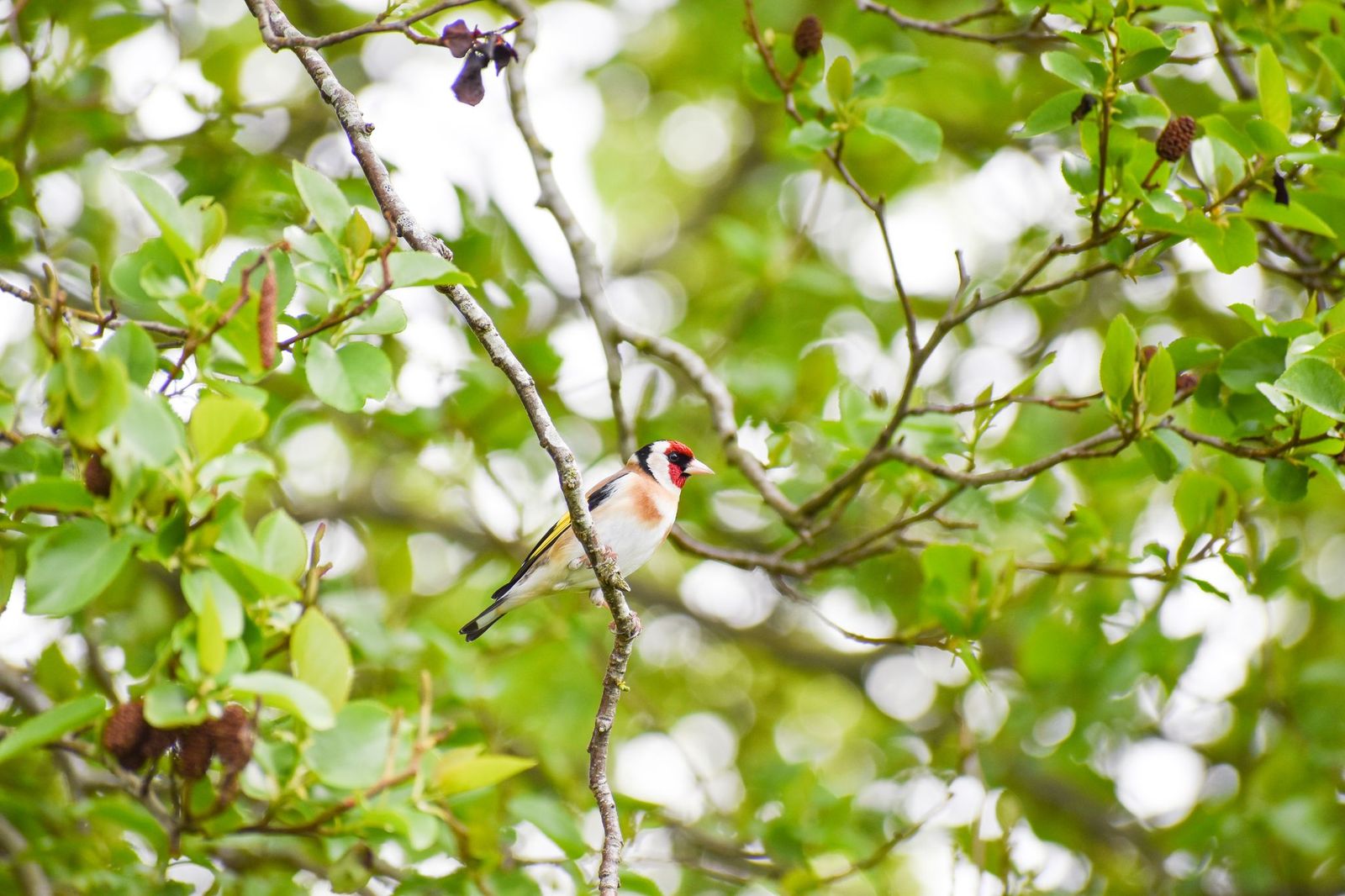 This year is the first time I’ve noticed how many juvenile birds come into the garden. The first brood consisted of starlings, blackbirds, a robin, and sparrows. Surprisingly the two larger species: the starling and blackbird were heavily dependent on being fed by their parents. Watching their movements, they refuse to pick up the raisins and sultanas left for them on the floor. Instead, they open their mouths wide and call, waiting for their parents to feed them. 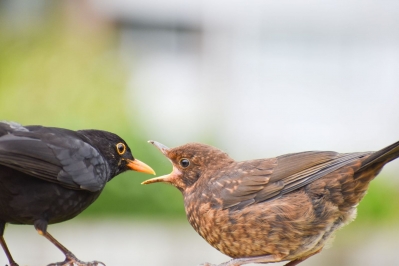 The robin joined the garden as a fluffy bundle, using the safety of the fence and hedge until its confidence increased. Its speckled plumage provides the perfect camouflage from predators. When the timing was right, the young bird hopped onto the ground, picking up leftovers from the floor, and nimbly moving in-between the small woodpile purposefully filled up with mealworms, suet, and sunflower hearts. Independence has been achieved. Weeks pass, and it becomes less fluffy, instead, turning more speckled and orange-yellow. More time passes and the unmistakable orange-red feathers begin to appear as the post-juvenile moult progresses. Perhaps now, our garden is its fiefdom, taking over from its parents.